The patriots are now changing the landscape of the US economy, the regulations that were holding the US from moving forward are now being removed. Trump has now remove the chains that held the economy down. Trump has now made a deal with Mexico and Opec has made a deal to cut production, Trump is getting ready to open the economy. The people have been kept in their homes for weeks now, the people can see who the tyrants are, this has exposed, the [DS] plan and what they planned to do. Fauci is now trying to put the blame on Trump, that he should have done more, but Fauci gave interviews and he is the one in trouble, he said there is nothing to worry about. Trump has been tweeting messages and it seems something is about to hit. Trump tweeted out an account with the Trump card, the question is when do you play it.

The big Oil Deal with OPEC Plus is done. This will save hundreds of thousands of energy jobs in the United States. I would like to thank and congratulate President Putin of Russia and King Salman of Saudi Arabia. I just spoke to them from the Oval Office. Great deal for all!

Having been involved in the negotiations, to put it mildly, the number that OPEC+ is looking to cut is 20 Million Barrels a day, not the 10 Million that is generally being reported. If anything near this happens, and the World gets back to business from the Covid 19…..

….disaster, the Energy Industry will be strong again, far faster than currently anticipated. Thank you to all of those who worked with me on getting this very big business back on track, in particular Russia and Saudi Arabia.

The 9.7 million barrels per day cut will begin on May 1, and will extend through the end of June.  (read more) 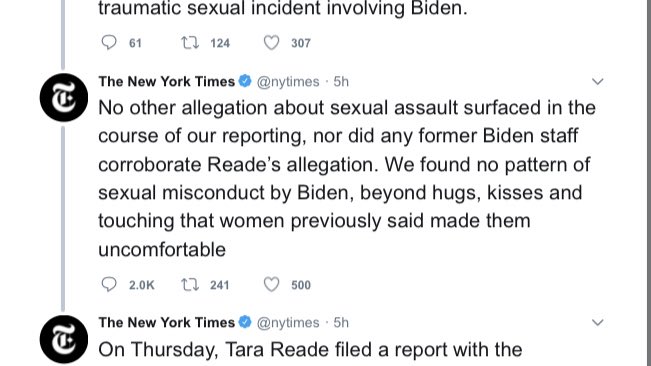 Remember the press spent a month essentially arguing that underage drinking was evidence that Kavanaugh committed sexual assault, but a long pattern of “hugs, kisses, and touching that women previously said made them uncomfortable” proves Biden’s innocence. 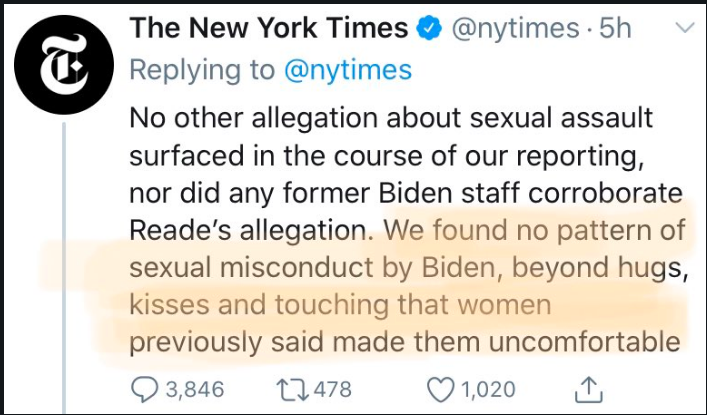 Fauci is now saying that had Trump listened to the medical experts earlier he could’ve saved more lives.

Fauci was telling people on February 29th that there was nothing to worry about and it posed no threat to the US public at large.

Take  A LISTEN TO FAUCI WHEN ALL THIS STARTED

Sorry Fake News, it’s all on tape. I banned China long before people spoke up. Thank you @OANN https://t.co/d40JQkUZg5

Numbers don’t line up: Case for panicking over coronavirus is falling apart

For the purpose of creating conflict and confusion, some in the Fake News Media are saying that it is the Governors decision to open up the states, not that of the President of the United States & the Federal Government. Let it be fully understood that this is incorrect….

….It is the decision of the President, and for many good reasons. With that being said, the Administration and I are working closely with the Governors, and this will continue. A decision by me, in conjunction with the Governors and input from others, will be made shortly!

For the first time in history there is a fully signed Presidential Disaster Declaration for all 50 States. We are winning, and will win, the war on the Invisible Enemy!

They can also help state governments coordinate with federal resources like the Federal Emergency Management Agency (FEMA) and the Army Corps of Engineers.The major disaster declaration provides a wide range of federal assistance programs for individuals and public infrastructure, including funds for both emergency and permanent work.

Governors, get your states testing programs & apparatus perfected. Be ready, big things are happening. No excuses! The Federal Government is there to help. We are testing more than any country in the World. Also, gear up with Face Masks!

I am working hard to expose the corruption and dishonesty in the Lamestream Media. That part is easy, the hard part is WHY?

We support you because we know your heart is in the right place, and greatly appreciate what an incredible job you’re doing as you work tirelessly to bring the USA back to prosperity and peace.
Thank you Mr. President!#KAG2020 pic.twitter.com/X8MqB4UGJ1