Skip to content
Reports
May 24, 2020May 25, 2020 x22report
SPREAD THE WORD
11,182
The MSM/Ds are pushing the narrative that the economy will not improve, it will not bounce back, they are pushing this because their event has failed, they are now panicking. When the economy improves and bounces back Trump will be stronger not weaker. The patriots are now loading up the Fed with everything, they are being buried. The [DS]/MSM event has now failed, more states, businesses are opening up, the cases are declining, deaths are declining, the experts were wrong. The people see the truth now, people are realizing that there is nothing to be afraid of, the see who is responsible, they see the tyrants/dictators.  The [DS]/MSM are now pushing everything have to stop people from even thinking about HCQ. The people are ready to see who the corrupt are, who committed treason, it’s time.

Why Our Economy May Be Headed for a Decade of Depression

Economic Recovery From Coronavirus Is a ‘Long Way Away,’ Joe Biden Says

A lot of interest in this story about Psycho Joe Scarborough. So a young marathon runner just happened to faint in his office, hit her head on his desk, & die? I would think there is a lot more to this story than that? An affair? What about the so-called investigator? Read story! https://t.co/CjBXBXxoNS

Trump Calls For Investigation Into Joe Scarborough For Murder of Staffer in 2001 https://t.co/j4bPb16D5v

A blow to her head? Body found under his desk? Left Congress suddenly? Big topic of discussion in Florida…and, he’s a Nut Job (with bad ratings). Keep digging, use forensic geniuses! https://t.co/UxbS5gZecd 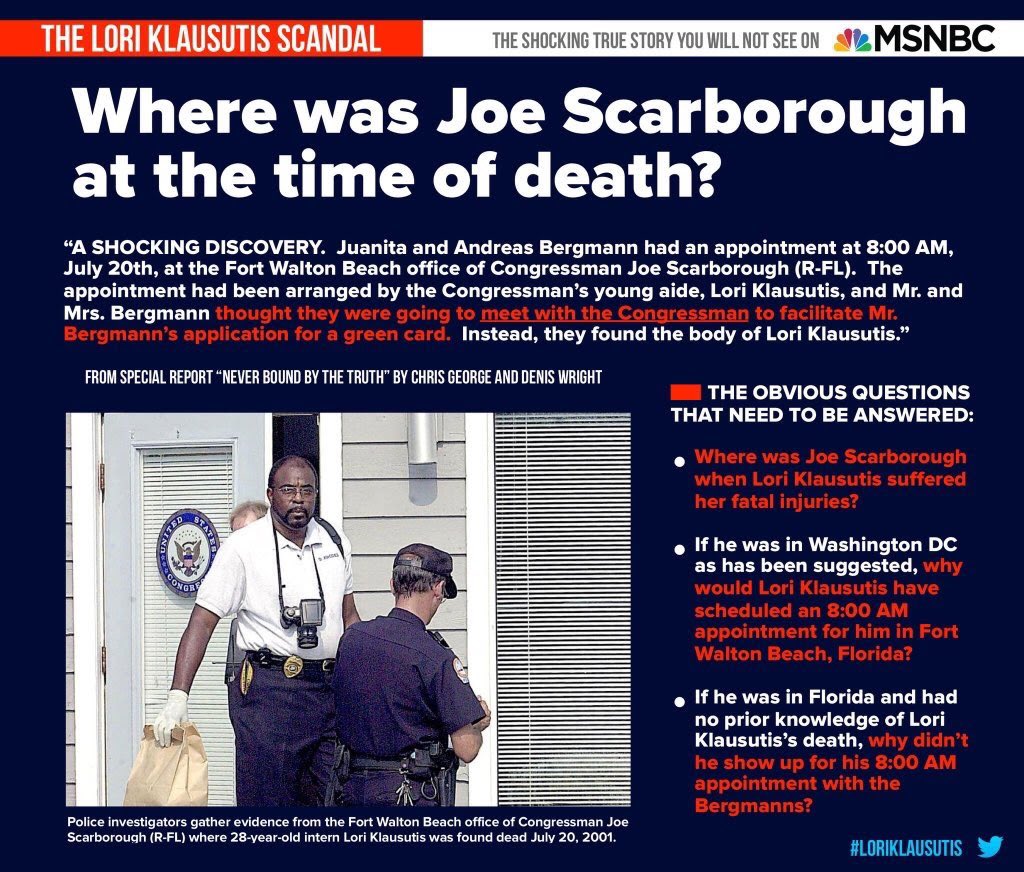 Joe Biden was speaking to the host on the breakfast club and he said something very racist, TAKE A LISTEN

WTH! I’m so disgusted by the blatant racism of @JoeBiden. #Iaintblack?

Dude helps write the 1994 Crime Bill & then tries to tell us what’s black?!

Joe Biden’s not a racist

George Soros is a humanitarian

Mittens Romney is an “honorable patriot”

…And Epstein killed himself

#FLYNN DOJ motion to dismiss exhibit 5: 2017 Comey transcript says FBI, Intel “tasked” to find out why Moscow not responding to expulsions, sanctions and “turned up these calls.” While intel close hold, “our people judged was appropriate..to have..Flynn’s name unmasked.” @CBSNews 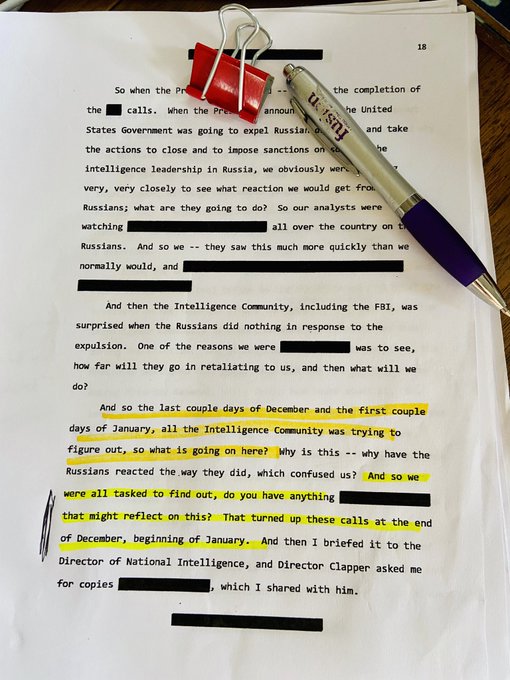 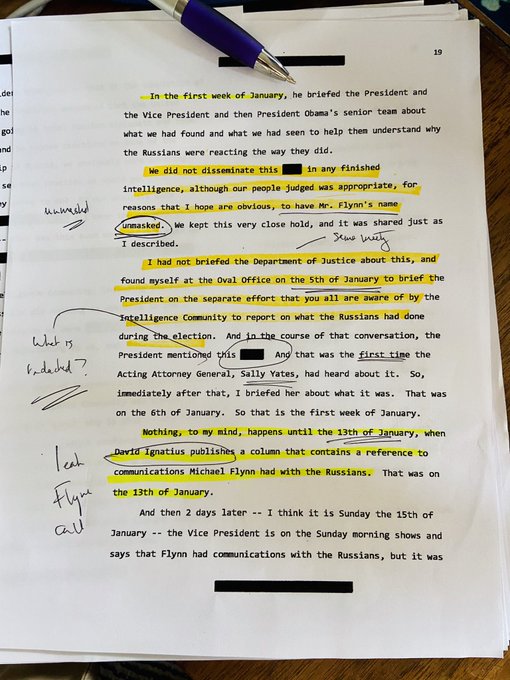 4,576 people are talking about this

U.S. District Judge Emmet G. Sullivan has retained Beth Wilkinson to represent him in defending his decision to a federal appeals court in Washington,

The “Watergate Prosecutors” – the group whose members spread lies about Flynn and the Russian Collusion hoax – ask the DC Appeals Court accept their amicus brief.

Judge Sullivan is supposed to be neutral arbiter.

But he hired a high-powered defense attorney to justify his bizarre attempt to force Flynn’s prosecution.

How can Sullivan judge this case when at this point, he’s effectively a participant? pic.twitter.com/EnblJfttUv

Who is paying for Judge Sullivan’s attorney? Taxpayers, out-of-pocket, or pro-bono?

In any scenario, Sullivan is not acting like a neutral and impartial arbiter.

Slight correction on your tweet: I trust FBI & Director Wray. I don’t trust @ODNIgov Directors @RichardGrenell or @RepRatcliffe. They’re the ones with the shovels burying evidence to protect @realDonaldTrump. https://t.co/geMiY8sjIq

I’m letting the public see more info. You are the one who worked to hide the information you didn’t like. You listened to multiple people in classified hearings say they had no evidence and yet go on TV and say the opposite. Transparency is now a must! https://t.co/C0pKnneuoh

#FLYNN FBI launches after action review by inspection division (internal affairs) that will “complement the already substantial assistance the FBI has been providing to U.S. Attorney Jeff Jensen (including)..special agents to assist..in the fact-finding process.”@CBSNews 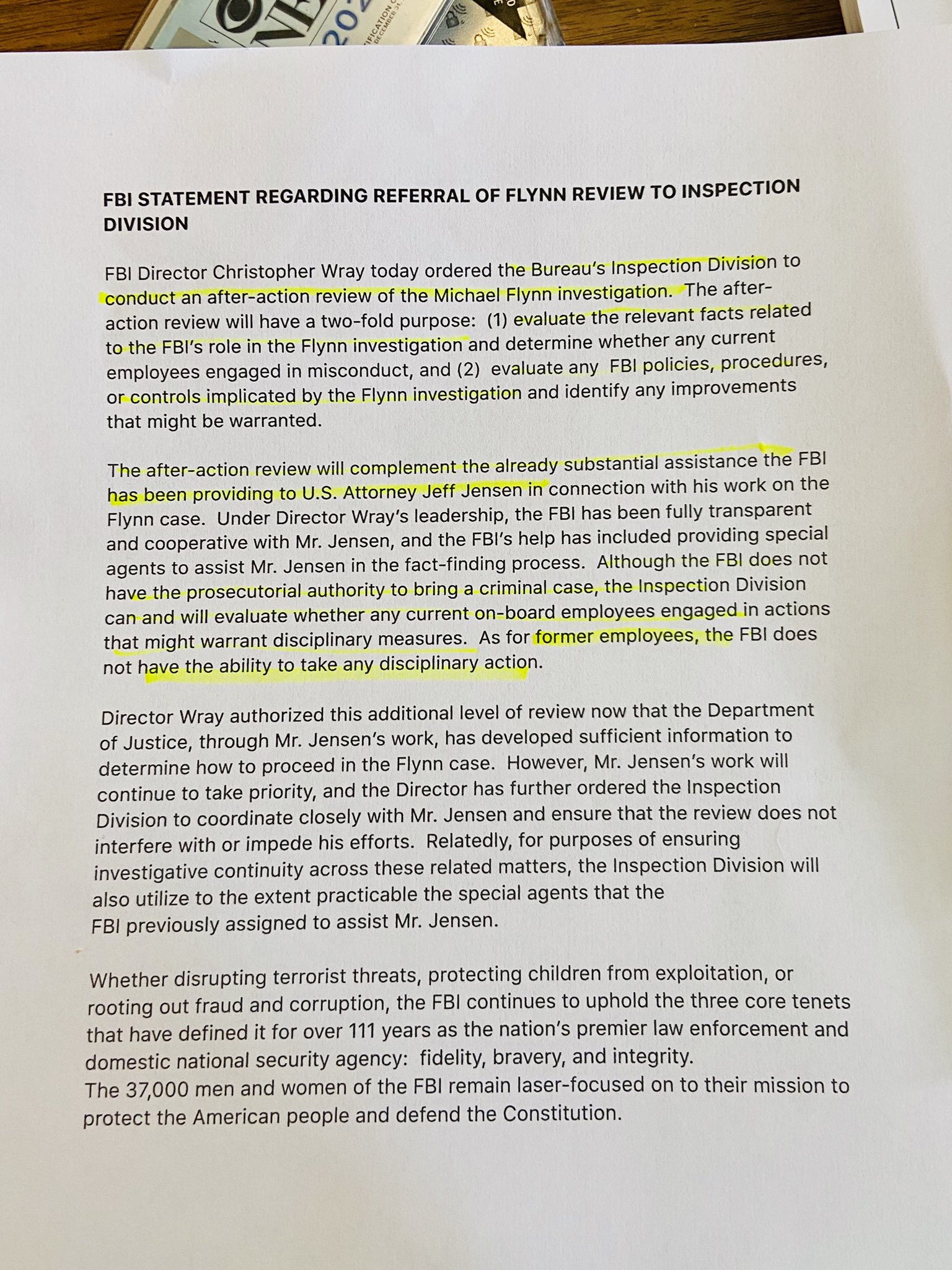 Jeff, you had your chance & you blew it. Recused yourself ON DAY ONE (you never told me of a problem), and ran for the hills. You had no courage, & ruined many lives. The dirty cops, & others, got caught by better & stronger people than you. Hopefully this slime will pay a big… https://t.co/AJPUBTPCnT

….price. You should drop out of the race & pray that super liberal @DougJones, a weak & pathetic puppet for Crazy Nancy Pelosi & Cryin’ Chuck Schumer, gets beaten badly. He voted for impeachment based on “ZERO”. Disgraced Alabama. Coach @TTuberville will be a GREAT Senator!

I will never apologize for following the law and serving faithfully and with honor. Neither of us knew about the phony investigation into our campaign until after I was sworn in. As you will recall, I recommended firing @Comey from the very beginning. https://t.co/iYBKfwYb6l

Q knew what was coming. Q told you in advance. The art of war is about deception.

Hillary Clinton tells appeals court she has “indisputable” right not to be questioned about her emails, seeks emergency relief from federal court order to testify under oath. Desperate to avoid being questioned by @JudicialWatch attorneys. https://t.co/5wmLYU1fV5

Lets talk about mail in voting and voter fraud

The United States cannot have all Mail In Ballots. It will be the greatest Rigged Election in history. People grab them from mailboxes, print thousands of forgeries and “force” people to sign. Also, forge names. Some absentee OK, when necessary. Trying to use Covid for this Scam!

Lockdowns failed to alter the course of pandemic and are now destroying millions of livelihoods worldwide, JP Morgan study claims

May glory be to thee, #HongKong! Call us terrorists, whatever you want, after the #WuhanVirus outbreak, #China has no more credibility in the world. #HongKongProtests #NationalSecurityLaw #StandWithHongKong

In a press release the DOJ says, in part:

The Department of Justice today filed a statement of interest in an Illinois federal court in support of a lawsuit filed by Illinois state representative Darren Bailey challenging certain actions of Governor J.B. Pritzker in response to the COVID-19 pandemic.

The Statement of Interest is part of Attorney General William P. Barr’s April 27, 2020 initiative directing Assistant Attorney General Eric Dreiband for the Civil Rights Division, and the U.S. Attorney for the Eastern District of Michigan, Matthew Schneider, to review state and local policies to ensure that civil liberties are protected during the COVID-19 pandemic.

In response to the COVID-19 pandemic, the Governor of Illinois has, over the past two months, sought to rely on authority under the Illinois Emergency Management Agency Act to impose sweeping limitations on nearly all aspects of life for citizens of Illinois, significantly impairing in some instances their ability to maintain their economic livelihoods.  According to the lawsuit, the Governor’s actions are not authorized by state law, as they extend beyond the 30-day time period imposed by the Illinois legislature for the Governor’s exercise of emergency powers granted under the Act.

“However well-intentioned they may be, the executive orders appear to reach far beyond scope of 30-day emergency authority granted to the Governor under IL law. Even during times of crisis, exec. actions undertaken in name of public safety must be lawful.”https://www.justice.gov/opa/pr/department-justice-files-statement-interest-challenging-legality-illinois-governor-s-sweeping …

DEPARTMENT OF JUSTICE FILES STATEMENT OF INTEREST CHALLENGING THE

BREAKING: President @realDonaldTrump announces that the CDC will be issuing guidance declaring places of worship ESSENTIAL, allowing them to re-open as of this weekend! 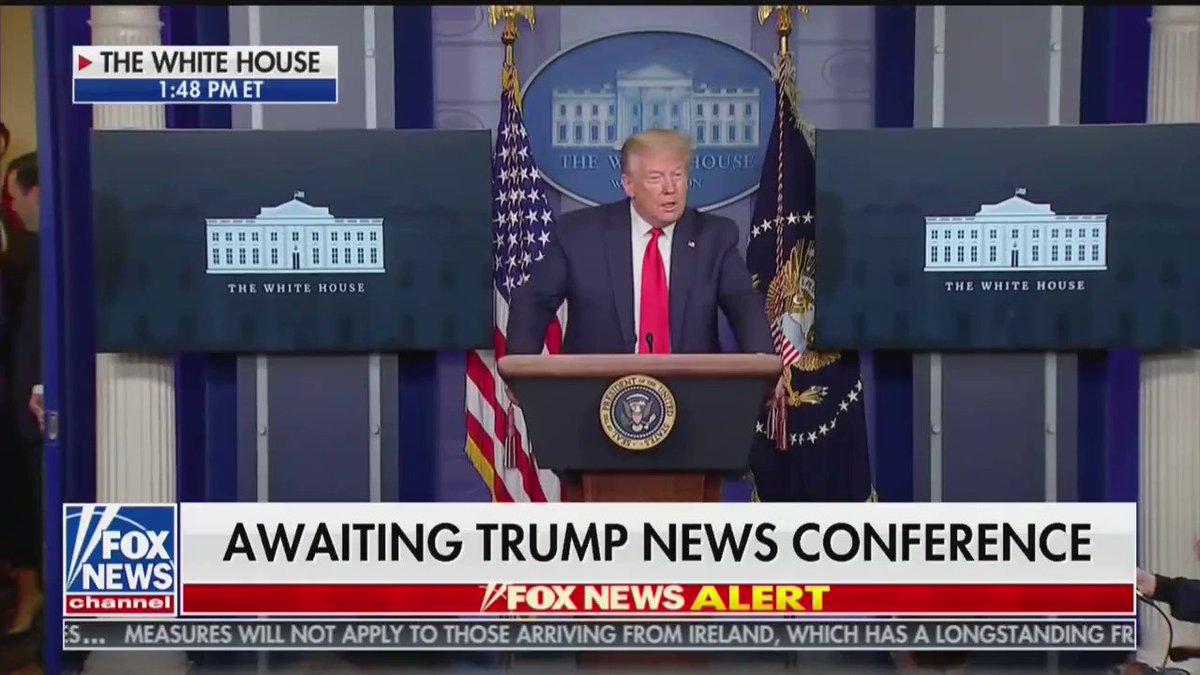 We were expecting new @CDCgov guidelines on reopening places of worship. Instead, @realDonaldTrump declared them to be “essential” – and dared Governors to challenge him over their reopenings.

How do you counter the [DS] event

3. Show a decline in cases, no deaths

4. As more and more open up people will see that there is nothing to fear

5. [DS] will push fear during this period, but people will see the truth

A study of 96,000 coronavirus patients found that those who received a drug Trump has promoted as a treatment had a “significantly higher risk of death compared with those who did not.”

The study, published Friday in the medical journal Lancet is the largest analysis to date of the risks and benefits of treating covid-19 patients with antimalarial drugs.

The Lancet analysis — by Mandeep Mehra, a Harvard Medical School professor and physician at Brigham and Women’s Hospital, and colleagues at other institutions — included patients with a positive laboratory test for covid-19 who were hospitalized between Dec. 20, 2019, and April 14, 2020, at 671 medical centers worldwide. The mean age was 54 years, and 53 percent were men.

The study is a retrospective analysis of their medical records, rather than a controlled study in which patients are divided randomly into treatment groups — the method considered the gold standard of medicine.

Our study has several limitations. The association of decreased survival with hydroxychloroquine or chloroquine treatment regimens should be interpreted cautiously. Due to the observational study design, we cannot exclude the possibility of unmeasured confounding factors, although we have reassuringly noted consistency between the primary analysis and the propensity score matched analyses. Nevertheless, a cause-and-effect relationship between drug therapy and survival should not be inferred. Randomised clinical trials will be required before any conclusion can be reached regarding benefit or harm of these agents in COVID-19 patients

A study of 96,000 coronavirus patients found that those who received a drug Trump has promoted as a treatment had a “significantly higher risk of death compared with those who did not.”

The president needs to stop playing a doctor on TV.https://t.co/0bimpU2WXG

Be aware of misinformation campaigns about the coronavirus.

“Nearly half of the Twitter accounts spreading messages on the social media platform about the coronavirus pandemic are likely bots,” Carnegie Mellon University researchers estimate.https://t.co/PzRBvptCZ3

#NEW: VA Secretary Robert Wilkie informs Senate Minority Leader Chuck Schumer in a letter the department has used hydroxychloroquine to treat about 1,300 veterans for coronavirus “and will continue to do so in accordance with Food and Drug Administration guidelines.”

HCQ Is Most Effective EARLY
For #COVIDー19

▶️REMOVE Restrictions On EARLY Use By Governors & The FDA

Nunes to ask State Dept. about ‘strange’ and irregular’ requests to monitor US journalists in Ukraine

Rep. Devin Nunes, R-Calif., said that he intends to ask the State Department for more information about “strange” and “irregular” requests allegedly made by ousted U.S. Ambassador to Ukraine Marie Yovanovitch to monitor the communications of U.S. journalists in the country.

Nunes, the top Republican on the House Intelligence Committee, said on Fox News’ “Hannity”  that he’s looking to ask Yovanovitch during her scheduled testimony Friday about her alleged efforts to monitor reporters.

Yovanovitch, who was appointed ambassador to Ukraine by former President Barack Obama in 2016, and recalled by the State Department in May of this year, is scheduled to give a deposition as part of the Democratic-led impeachment inquiry against President Trump. She remains a State Department employee, and it’s unclear whether the administration will attempt to block her appearance.

“What I’ve heard — and I want to be clear — there’s a difference. What I’ve heard is that there were strange requests, irregular requests to monitor not just one journalist, but multiple journalists,” Nunes told host Sean Hannity. “Now perhaps that was OK. Perhaps there was some reason for that — that it can be explained away. But that’s what we know and that’s what we’re going to be looking into.”

Hannity said multiple sources have told him they “believe there is evidence that government resources were used to monitor communications” of U.S. journalists and that Yovanovitch may have been involved. Nunes noted that if the State Department had conducted surveillance over press activity in the Ukraine, it may have been done properly.