Trump has now trapped, congress. Congress has been put into the spotlight with the stimulus bill and the NDAA. Now people are watching to see how congress handles this.This is something they do not want, they are exposed. The EU begins to talk about the great reset, this is already failing. The [DS]/MSM has just been exposed. The idea that there is no such thing as election fraud and that the election systems are secure has just been debunked. GA held a hearing and now the GA lawmakers are looking into the ballots. The entire election scam is falling apart and those who [knowingly] participated are feeling the heat. Tick tock time is running out. Ep 2366b – “Move Slowly, Carefully — And Then Strike Like The Fastest Animal On The Planet!” Ep 2366a – Trump Traps Congress, The People Are Watching

I want businesses open. I want people working. I want society back.

But this requires cooperation, reciprocity & trust – especially in our trade & investment relationship.

I’m glad to exchange on this with President Xi, jointly with @eucopresident pic.twitter.com/SpXucBqxGP

“Barack Obama was toppled from the top spot and President Trump claimed the title of the year’s Most Admired Man. Trump number one, Obama number two, and Joe Biden a very distant number three. That’s also rather odd given the fact that on November 3rd, Biden allegedly racked up

…millions more votes than Trump, but can’t get anywhere close to him in this poll. No incoming president has ever done as badly in this annual survey.” @MarkSteynOnline @TuckerCarlson That’s because he got millions of Fake Votes in the 2020 Election, which was RIGGED!

Scytl (Spanish company) is partnered with (and perhaps owned by) the SWISS Post.https://t.co/qekxx5KBYp pic.twitter.com/0HZ1RNR3Ea

Why does a SWISS BANK own the voting company that is one of the biggest voting companies in the US?
Why does the SWISS POST count our votes through their partner in Spain?

Switzerland held a secret meeting of world elites in 2019.
Stacey Abrams was invited.

The Trump campaign is challenging the 50,000 illegal absentee votes that were allowed to be counted in the state.

Here is the press release: 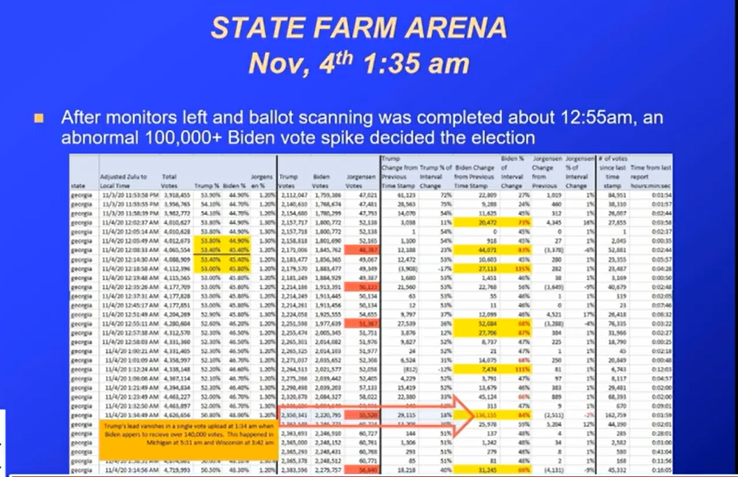 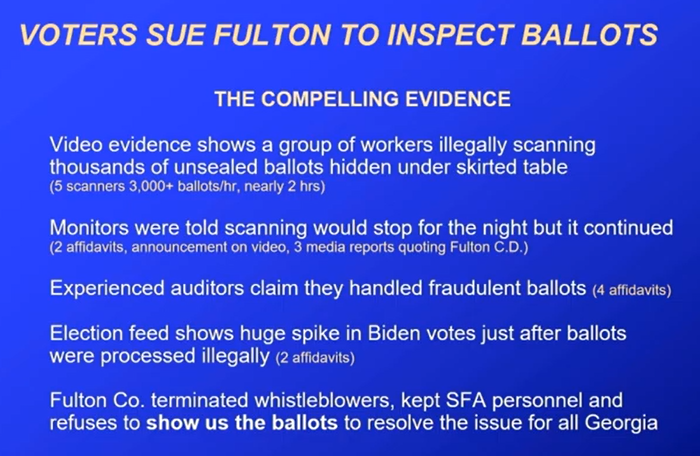 The real story of signature verification in Georgia. pic.twitter.com/2szKhiSx2y

Hutton said if state officials would simply allow investigators to physically examine the ballots, they could quickly determine if the ballots are counterfeit. Hutton says Georgia officials are dragging their feet and keeping the ballots hidden. https://t.co/3mnG3BO8PU

Welcome to 2020, when @JovanHPulitzer hacked a voting machine live during a government hearing and the press insists there is no evidence of election fraud.

Two months worth of fake talking points were just blown sky high. “Dominion’s voting machines are secure, can’t be hacked into remotely and are not connected to the internet anyway and HOW DARE YOU ALLEGE OTHERWISE, YOU LUNATIC!”

It follows the bombshell report of the live hack of Dominion by @JovanHPulitzer & would allow him to *audit the ballots.*

Hearings from Atlanta on the Georgia Election overturn now being broadcast. Check it out. @OANN @newsmax and many more. @BrianKempGA should resign from office. He is an obstructionist who refuses to admit that we won Georgia, BIG! Also won the other Swing States.

.@BrianKempGA, his puppet Lt. Governor @GeoffDuncanGA, and Secretary of State, are disasters for Georgia. Won’t let professionals get anywhere near Fulton County for signature verifications, or anything else. They are virtually controlled by @staceyabrams & the Democrats. Fools!

Mail-In Ballots will lead to massive electoral fraud and a rigged 2020 Election. Look at all of the cases and examples that are out there right now, with the Patterson, N.J., being the most recent example. Republicans, in particular, cannot let this happen!

The greatest Election Fraud in our history is about to happen. This may top the Democrats illegally spying on my campaign! pic.twitter.com/ePfNVJiHw7

We now have far more votes than needed to flip Georgia in the Presidential race. Massive VOTER FRAUD took place. Thank you to the Georgia Legislature for today’s revealing meeting!

Millions of voters concerned about election integrity deserve to be heard. I will object on January 6 on their behalf pic.twitter.com/kTaaPPJGHE

The Swamp is coming after Josh Hawley hard. He needs all the support you can give. You can start by following him right now @HawleyMO 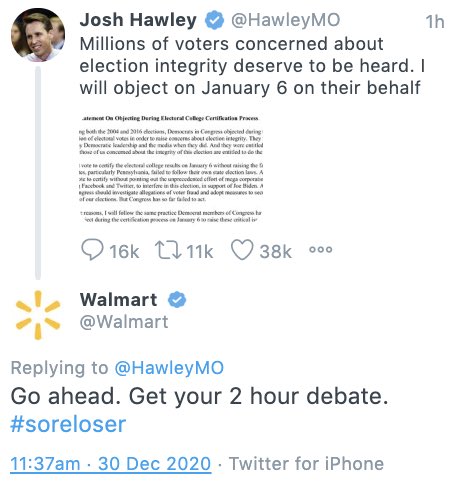 Thanks ⁦@Walmart⁩ for your insulting condescension. Now that you’ve insulted 75 million Americans, will you at least apologize for using slave labor? pic.twitter.com/oYJP4Cv2qE

JUST IN: Representative Jeff Duncan (R-SC-03) says he plans to object to the Electoral College certification on January 6th.

Pence’s final visit to Israel before leaving office is canceled

Twitter is shadow banning like never before. A disgrace that our weak and ineffective political leadership refuses to do anything about Big Tech. They’re either afraid or stupid, nobody really knows!

The Federal Government has distributed the vaccines to the states. Now it is up to the states to administer. Get moving!

“Hold out baits to entice the enemy. Feign disorder, and crush him.”

“Trump’s own advisors are lying to him. He has no idea what’s going on. I feel sorry for him.” pic.twitter.com/ZFARKSkAq6

Move slowly, carefully — and then strike like the fastest animal on the planet!