Ep 2865b – Sometimes You Must Lose Everything To See Who Is Loyal, Illusion No More Russia is shutting down gas to Germany because of leaks. The People are hitting the precipice and now there is talk of protests when winter hits. This movement will bring down the [CB]/[WEF] and it will spread world wide. The [DS] is now stripping the illusion away, their roles that have used for years are no longer working, now they are reacting out of panic and fear and people can see their true selves. When Trump allowed the [DS] to move into the WH, he did it so he could see the entire board and to see who was loyal. Those who thought that they won allowed their true inner person to come out and Trump was able to see this very clearly. Now [JB] and the puppet masters are so panicked that they have removed their roles and the people can now see their true inner evilness.

Thanks to President Biden, more than 1 million prisoners received Covid stimulus checks. Maybe he can send his 87,000 new IRS agents to retrieve those rather than go after hard-working Americans. 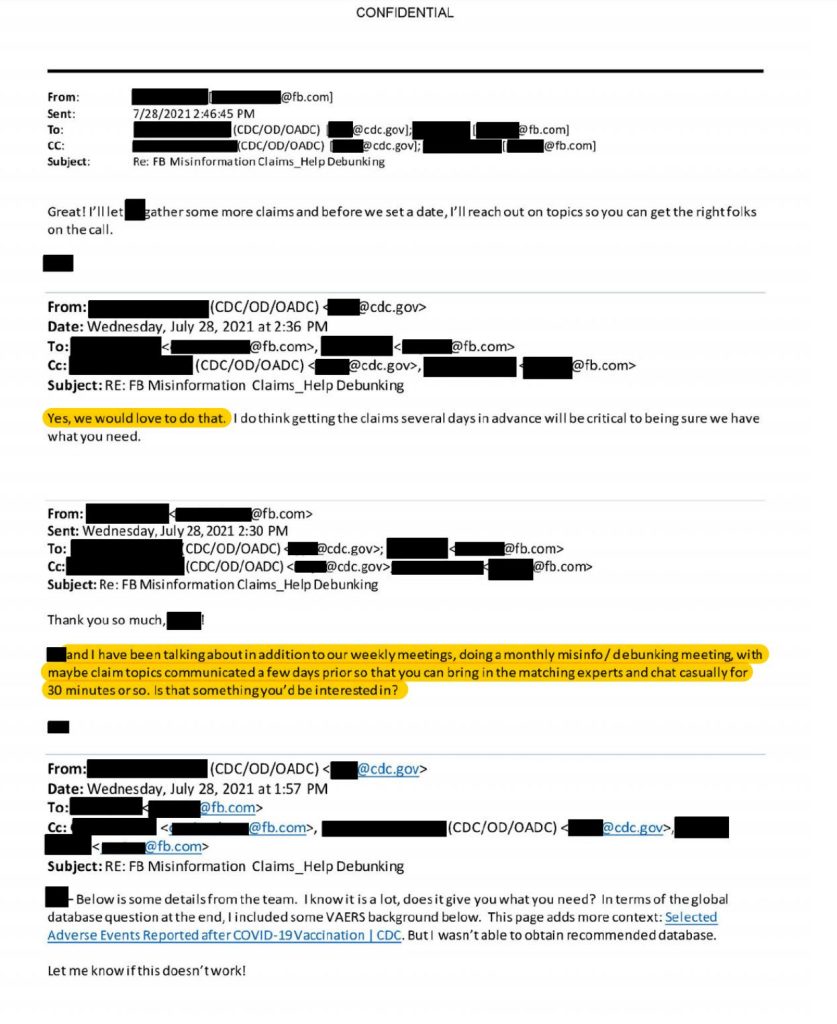 More and more Leftists are waking up to the clear evidence that Facebook and Twitter censored the Hunter Biden laptop story for political purposes. At this

Oh I think Maggie Haberman said he flushed them down the toilethttps://t.co/yp0LjM8JXB

Maybe Trump had photos of you and Fang Fanghttps://t.co/yNqPI499jd

the DOJ’s claim to continue with this shroud of Secrecy.” NOTE: With backing ranking republicans three committees for FBI + DOJ, letter suggests no internal turf wars for oversight of Mar-a-Lago case, if house flips in November.

The speech @POTUS gave last night is one of the most important I've seen a president give. We must name the threat our democracy faces–including a MAGA faction that incites violent insurrections and rejects the rule of law—in order to overcome it together. pic.twitter.com/7Qiy4vmTh8

“‘Reject the evidence of your eyes and ears.’, it was their final, most essential, command.”
-G. Orwell pic.twitter.com/wJ4iRXdaAf 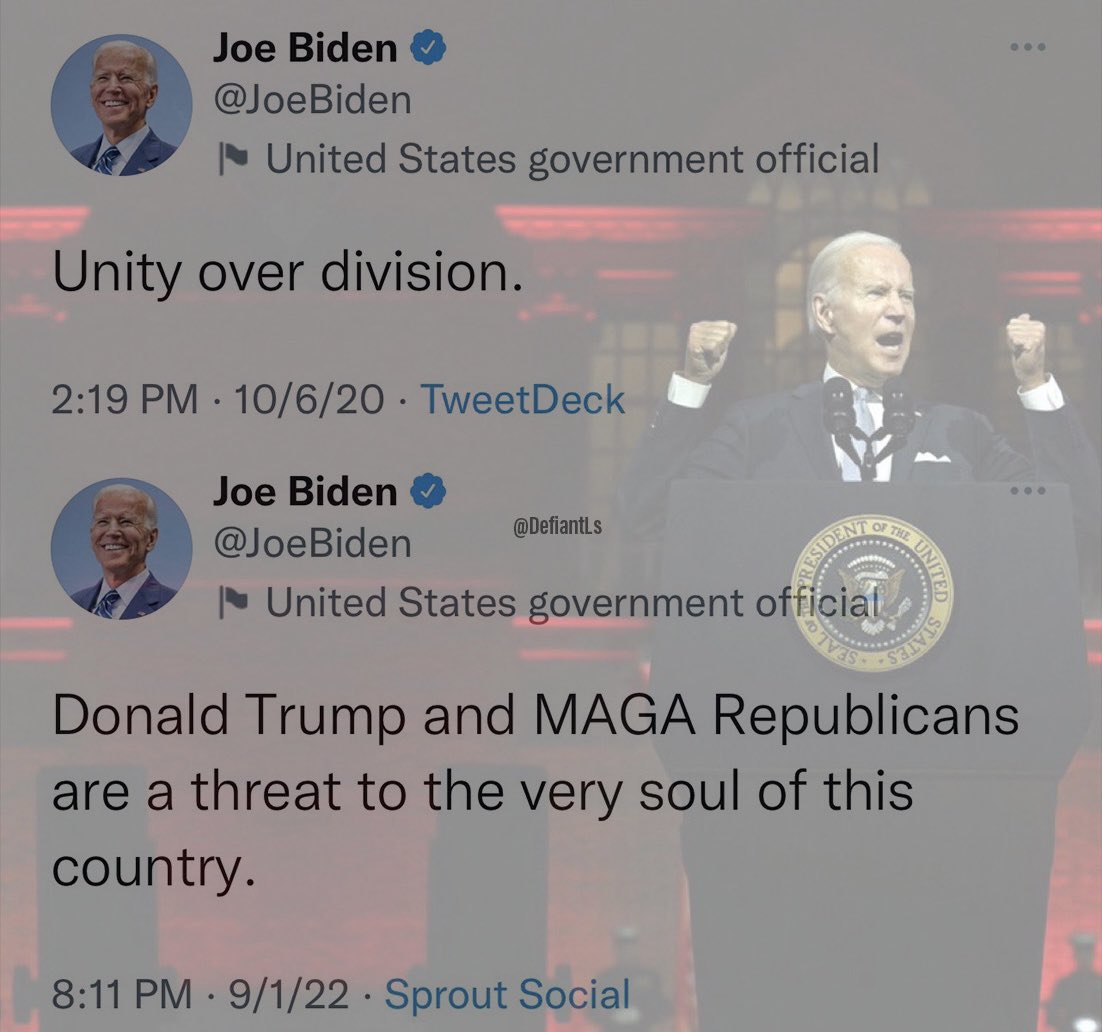 Who is the Biden regime at war with and how will the regime win this war? Be specific. https://t.co/TEQUWx3S9j

Report, Biden Speech Will Call for Nation to Drop Demands for Freedom, Stop Resisting Collectivism and Unite as One Nation Conforming to the Dictates of His Administration 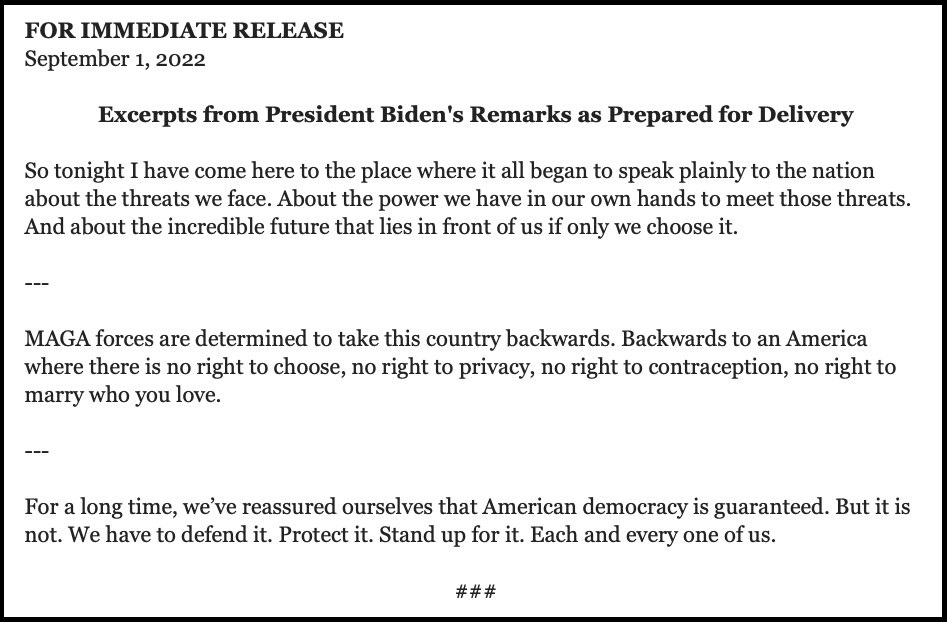 These are the maga threats

What part of this extreme MAGA agenda is a threat to democracy?

the military is supposed to be apolitical. Positioning Marines in uniform behind President Biden for a political speech flies in the face of that.

Biden’s speech  was to justify the arrest of his predecessor

throughout history Dictators who lose control divide the people, then they blame everything they have done on the opposing group within the population. They will raid, threaten, and project everything they are doing on their opponent and those that support him/her.  As the dictator continues to lose control and the people of the country are turning against him/her they must regain control and force people to conform, this is done by using force, like the military or specialized squads.

Sometimes you must show the people.  Why did Trump lose, sometimes you must lose everything to see the truth, to see who is loyal .
People use roles, when in public they pretend to be something they are not, to see past their role you must remove it, the only way to do this is to make the that person/people lose control, once they are in the state of panic/fear and they feel they have lost control they will remove the role and you will see very clearly who they really are.

Loyalists_critical.
A counter-attack to the 1st [law and order] strike _prepared and ready in an effort to change the narrative _prevent [blind] mass public awareness re: coord effort to remove [sitting] US POTUS _covertly disrupt CoC _regional comm as needed.
Media plans to disregard [re_label as political attack _AG election interference] and inject script.
Some commanding officers [EOs] may provide [CLAS 1-99] that do not reflect those [1-99] of the POTUS or the AG of United States.
Appropriate action should be taken.
Remember your oath.
Remember your mission.
Infiltration not invasion.
Defend and protect at all costs.
Q

They are being forced into the light for all to see.
https://www.youtube.com/watch?v=rVN1B-tUpgs
Keep faith in Humanity.
Keep faith in Yourself.
Light of the World.
Q

3 thoughts on “Sometimes You Must Lose Everything To See Who Is Loyal, Illusion No More – Ep. 2865”