Christopher Steele’s primary sub source [PSS], Igor Danchenko, was indicted in federal court in Virginia on the morning of Thursday, November 4. The Russian national is charged with five counts of making false statements to federal officials.

The first count involved Danchenko telling the FBI that longtime Clinton family associate Charles H. “Chuck” Dolan was not a source for any of the allegations that ended up in the “Company Reports” he was sending to Steele.

But the FBI found – and Durham’s indictment shows – that an email from Dolan to Danchenko relating a story about the firing of Trump campaign chair Paul Manafort matches an entry in the Steele Dossier almost word-for-word. 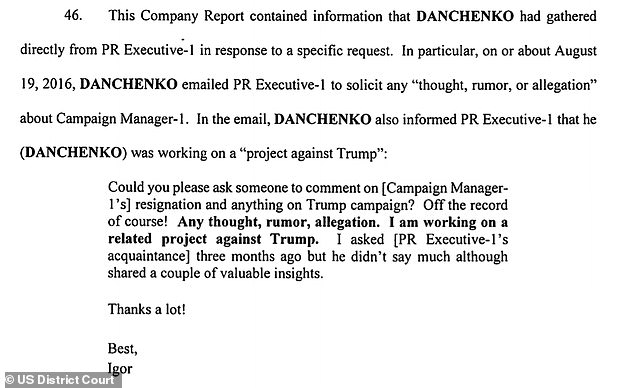 The Steele Dossier entry claimed to match Dolan’s email to Danchenko almost word-for-word, but is attributed to “an American political figure associated with Donald TRUMP and his campaign” rather than “a close associate of Bill and Hillary Clinton”

In addition to lying to the FBI to try to steer them away from Dolan as a source for at least two Steele Dossier stories, Danchenko had also gone on to claim that a person he had never met or even spoken to was a source for some of the dossier’s allegations.

This is why the other four counts all relate to a former President of the Russian/American Chamber of Commerce, a man named Sergei Millian.  Danchenko told a story to the FBI about having gotten several key dossier allegations in a phone call with a person he assumed was Sergei Millian. 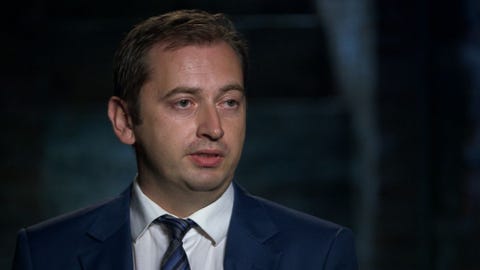 But the FBI proved that Danchenko and Millian’s had never met, and their total communications consisted of two emails that Danchenko sent to Millian that the other man didn’t respond to.

So the clear theme of the lies Danchenko was telling in these interviews with the FBI involved his attempts to cover up real sources of the dossier.  He has to have a strong motivation to do that, since he’s already aware he’s probably in legal trouble.

He refused to admit a real source was a source [Dolan], then turned around and tried to proffer someone he’d never met [Millian] as the source of key dossier sections – including what turned out to be the foundational allegation of the Carter Page FISA surveillance warrant.

For more than four years, Sergei Millian has insisted he did not give Danchenko any of the Trump/Russia collusion allegations that are attributed to him. And now Durham, with this indictment, is vindicating what Millian has been claiming all along.

This means the real source of the allegation about there being a “well-developed conspiracy” between the Trump campaign and “the Russians to hijack the election” is still unknown.

Many people have been assuming for some time now the source of that key allegation was Millian.  They are now going to have to walk that back.

It should be getting major attention in the mainstream press that the foundational allegation used in the FISA surveillance warrant on Carter Page is still unverified after five years, and nobody seems to know who it was who gave it to Danchenko and by extension, to Christopher Steele.

Danchenko Was Investigated For Being A Suspected Russian Spy Himself

There’s always been a big suspicion that Danchenko is a Russian intelligence agent.  The fact he was being investigated by the FBI for this in 2009/2010 when he bolted the country before they could get a FISA warrant on him certainly bolsters those suspicions.

What, you never heard about that? It came out last year. In multiple news stories. And it was quickly buried and forgotten.

From the Washington Examiner’s Jerry Dunleavy: And this is from Real Clear Investigation’s Eric Felten: To get a FISA warrant on an innocent American citizen and patriot being accused of being a Russian agent, the FBI used fake allegations that came straight from a Russian national who they still had an open case on for being a suspected Russian agent himself.

And as we all know, the FBI and the Mueller Special counsel hid all of this from the FISA Court while getting that tainted warrant renewed three times.

Words fail me in describing how much of an absolute farce this all was. Devin Nunes always said when the truth came out about how RussiaGate went down, it would blow people’s minds.

In my column next week for X22, I’ll get into thoroughly debunking this new talking point that’s making the rounds that Durham is part of a massive coverup for the DOJ/FBI & the Mueller Special Counsel, or that he’s only going to indict “Clinton” people while being careful to leave “Obama” people untouched.