The [CB] are not giving up with the BREXIT, they are now trying to create rules that the UK must follow, or the UK will be punished, will BJ go along with this, no, the UK is in a position of strength. The [CB] has now shown its true colors, the event that started in China might hurt the US economy. Trump countered with a message to Xi. The [DS] operatives are now being removed, there is a silent war that is being waged in the shadows. The [DS] corruption is now being exposed, documents have been delivered and the truth is about to be revealed to the public. The [DS] players are in a panic, they see their power structure being dismantled one piece at a time. The best is yet to come.

Just had a long and very good conversation by phone with President Xi of China. He is strong, sharp and powerfully focused on leading the counterattack on the Coronavirus. He feels they are doing very well, even building hospitals in a matter of only days. Nothing is easy, but…

….he will be successful, especially as the weather starts to warm & the virus hopefully becomes weaker, and then gone. Great discipline is taking place in China, as President Xi strongly leads what will be a very successful operation. We are working closely with China to help!

The Democrat Party has given up on counting votes in Iowa. Looks like it all got computer “fried”. Nobody knows who the real winner is. Maybe it’s Sleepy Joe, but it’s not looking that way. They lost millions & millions of dollars, all for NOTHING. But I WON Iowa big!

Iowa and New Hampshire will not be moved from the Primary Schedule as long as I am President. Great tradition!

BELTWAY BUZZ: Biden and Hillary kicking around the idea of forming a ticket if he gets the nomination?

This is repeating the Democrat lies to cover-up the Biden family making millions everywhere crooked Biden was Point Man-Iraq-Ukraine-China.

All facts are backed up by witnesses, documents and tapes so are Solomon’s. Go to https://t.co/OGyi1JKawT and get evidence not bull. https://t.co/F6TJjZIBkE

Rudy Giuliani: I challenge Brian Murphy to a debate on Fox on the lies he is spreading about us. If he needs help maybe he can bring a few others. I’ll bring Joe or Vicky or John or all of them. Fox owes us an opportunity to respond to this attack. I can prove what I’m saying. Can he?

I guess when they couldn’t get the info off of John Solomons laptop the DS went to plan B, we will just say its disinformation

Barr says no investigations into 2020 candidates, campaigns without his approval

During his testimony about Trump’s crimes, Lt. Col. Vindman had a message for his father: “You made the right decision 40 years ago to leave the Soviet Union. Do not worry, I will be fine for telling the truth.”

It’s appalling that this administration may prove him wrong. https://t.co/aB5eGQFil4

Sessions: Justice Department Has 27 Investigations into ‘Epidemic’ of Leaks

The U.S Court of Appeals for the District of Columbia Circuit on Friday dismissed an emoluments-related lawsuit filed by members of Congress against President Donald Trump, ruling that the appellees lacked standing.

The three-part Article III standing test requires that the plaintiff demonstrate an “injury in fact” if a lawsuit is to move forward:

1) The plaintiff must have suffered an “injury in fact,” meaning that the injury is of a legally protected interest which is (a) concrete and particularized and (b) actual or imminent

3) It must be likely, rather than speculative, that a favorable decision by the court will redress the injury

The court said that the 215 Members of the Congress failed that test.

Another win just in. Nervous Nancy Pelosi and the Democrats in Congress sued me, thrown out. This one unanimous, in the D.C. Circuit.
Witch Hunt!

President @realDonaldTrump’s announcement to launch free trade negotiations with #Kenya is an important step forward in our strategic partnership. Free trade with Kenya will lead to greater prosperity for both our countries.

More than a hundred thousand anti-#Macron protesters out on the streets of #France today, demanding Macron’s resignation.

This was #Marseille today during the #greve6fevrier protest.

The U.S. Treasury Department has started turning over confidential banking records related to Hunter Biden in response to requests from Senate investigative committees.

A spokesman for Grassley said he could not elaborate on what the records contained at this time but criticized Democrats for “recklessly” seeking to interfere with the investigation.

Banks and financial institutions are required to file “suspicious activity reports” when they notice unusual transactions that could indicate illegal activities such as money laundering, terror financing, or fraud.

Democrats Used Ukraine to Enrich Themselves and Assist Russia, Iran and China

The [DS] players were laundering US Aid via Ukraine, Iran, China, Russia, many of these countries got a cut, and the money ended back in the DS players bank accounts.

They Tried to Destroy the USA Internally

This silent war is being waged in the shadows, the [DS] was trying to kill the US from within, they were tearing the country apart, their eventual goal was to remove the constitution, the rights of the people. 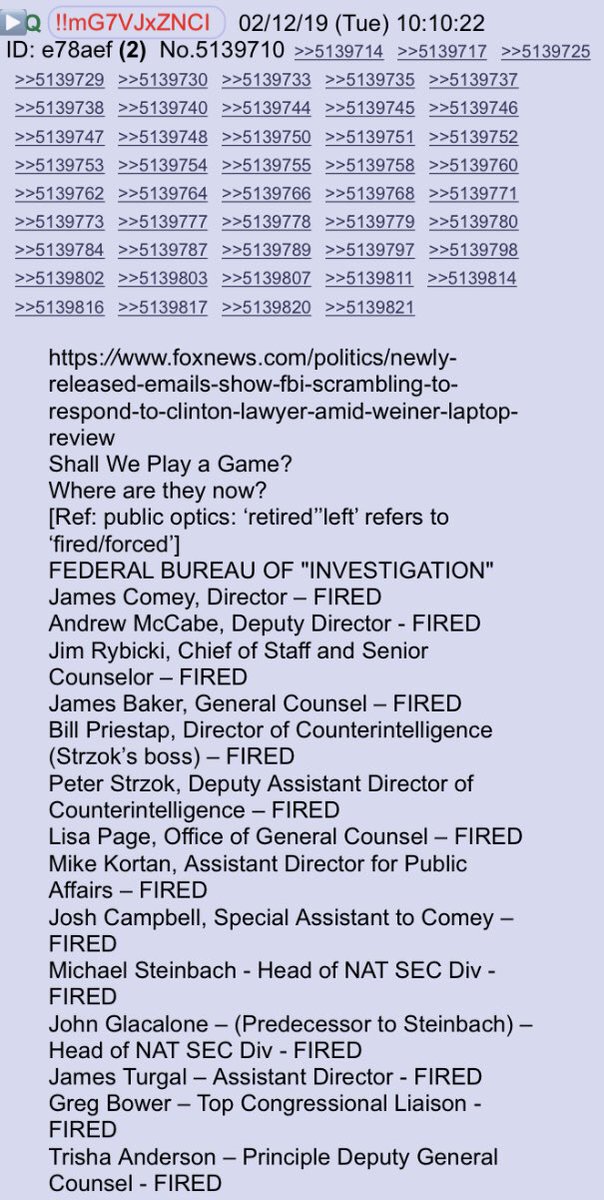 Just one step away from blowing up the Deep State. If Comey & Brennan’s crew of dirty agents are proven GUILTY of a politically motivated attack against Trump, then everything they touched is in question: Russia DNC hack lie, HRC email investigation, Uranium1 cover-up. THE WORKS! https://t.co/0sDXevM4Sb

Why is China/Qatar donating vast sums of money to our education institutions?
https://finance.yahoo.com/news/harvard-leads-u-colleges-received-100000585.html📁

About 115 colleges got monetary gifts, contracts or both from sources in mainland China in the six and a half years through June, . The leader was Harvard University, which pulled in $93.7 million, the majority as gifts. The University of Southern California and University of Pennsylvania were second and third.

The Department of Justice announced today that the Chair of Harvard University’s Chemistry and Chemical Biology Department and two Chinese nationals have been charged in connection with aiding the People’s Republic of China.

Dr. Charles Lieber, 60, Chair of the Department of Chemistry and Chemical Biology at Harvard University, was arrested this morning and charged by criminal complaint with one count of making a materially false, fictitious and fraudulent statement.  Lieber will appear this afternoon before Magistrate Judge Marianne B. Bowler in federal court in Boston, Massachusetts.

Yanqing Ye, 29, a Chinese national, was charged in an indictment today with one count each of visa fraud, making false statements, acting as an agent of a foreign government and conspiracy. Ye is currently in China.

Zaosong Zheng, 30, a Chinese national, was arrested on Dec. 10, 2019, at Boston’s Logan International Airport and charged by criminal complaint with attempting to smuggle 21 vials of biological research to China.  On Jan. 21, 2020, Zheng was indicted on one count of smuggling goods from the United States and one count of making false, fictitious or fraudulent statements.  He has been detained since Dec. 30, 2019.

Is it really so hard to believe [F] actors are able to bribe those in key positions within the US to betray their Country?
Q

4 thoughts on “The Silent War Is Being Fought In The Shadows, Justice Is Coming – Episode 2091”