Ep 2975b – A Clean [H]ouse Is Very Important, Let the Unsealing Begin, Let The DEC[L]AS Begin Wyoming as submitted a bill to ban electric cars. [WEF] is taking hits, and the leader of Blackrock doesn’t know why people are criticizing ESG. EM lets everyone know what the “S” stands for in ESG. [JK] says the quiet part out loud, they need more money to make their system operational. [JB] says he will veto the IRS bill. The patriots have now taken the house, the house is clean and investigation can begin. Trump has the declas documents, did he just signal that it is almost time to release some the declas docs. [JB]/[HB] are now trapped in the narrative, they have become a liability and the [DS] needs to remove them before the investigation lead way pass the Biden’s. The Delaware prosecutor is about to release damaging information about the Biden’s. Will [JB] be taken out by the 25th amendment?

A group of GOP Wyoming state lawmakers want to end electric vehicle sales there by 2035, saying the move will help safeguard the oil and gas industries.

“The proliferation of electric vehicles at the expense of gas-powered vehicles will have deleterious impacts on Wyoming’s communities and will be detrimental to Wyoming’s economy and the ability for the country to efficiently engage in commerce,” the bill reads.

U.S. climate envoy John Kerry says that despite nearly a $1 trillion committed by global philanthropies for various causes over the last few years, only 2% of this amount goes toward climate action.

He said  during a panel session at the World Economic Forum in Davos that it’s estimated from $7.5 billion to $12.5 billion of global philanthropy is directed toward climate action. He and others urged philanthropies across the world to come together and contribute more to climate action.

The number of people in the world who understand this crucial fact about what’s makes the entire international monetary system go is probably like less than 5 million.

"Illegal hate speech, which you will have soon also in the U.S. I think that we have a strong reason why we have this in the criminal law." pic.twitter.com/iLR1MePTYT

Why’d Joe Biden lose to the Taliban if all you need to win a war against country folk with rifles is some F-15s? https://t.co/ZMLskzCRRA

The FAA has very quietly tacitly admitted that the EKGs of pilots are no longer normal. We should be concerned. Very concerned.

Population collapse is an existential problem for humanity, not overpopulation!

China declares Biontech vaccination to be a lethal injection

The truth is finally coming out

President Joe Biden has been the victim of ridicule online after forgetting the name of the wife of Martin Luther King III while singing her happy birthday.
🔗- https://t.co/MRiXhkdT4A pic.twitter.com/gORq2S9CWm

Quite possibly.  I think you hit the nail on the head earlier in the show.  It’s a clean-up job.  There’s no reason for her to be out there, other than they are trying to cover up something else.

And if you have Adam Schiff, the New York Times, CNN, and all these Democrats saying, oh his inadvertent mishandling of classified documents.  They’re all singing that song.  It lets you know that that’s the cover-up it’s not the actual story.  So I don’t think the actual story has come out yet.

Bobb goes on to say: 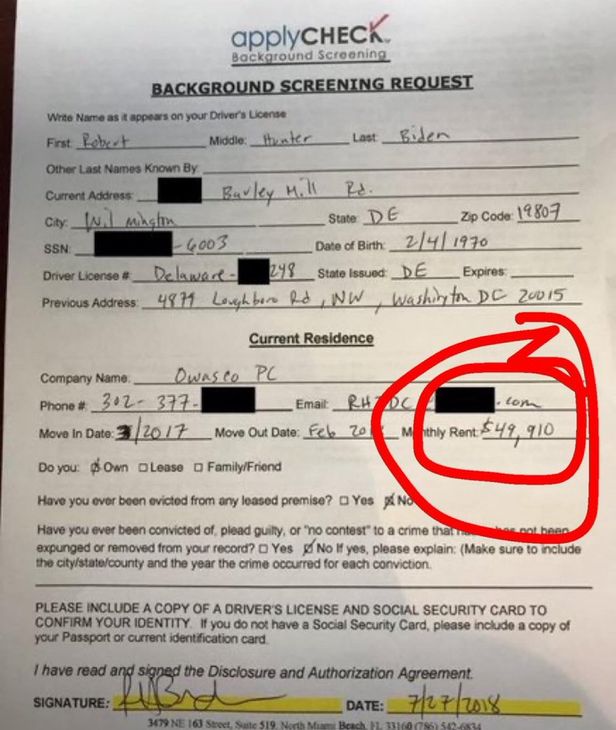 But then on July 18, 2022 the JoeBiden.com financial disclosure and tax returns page was altered.

Starting on July 18, 2022, the JoeBiden.com webpage linked to the Democrat donation page. The Biden tax filings are no longer available for public viewing.

2017 Delaware by Jim Hoft on Scribd

2018 Delaware by Jim Hoft on Scribd

2016 Federal by Jim Hoft on Scribd

2017 Federal by Jim Hoft on Scribd

2018 Federal by Jim Hoft on Scribd

There is no way a record isn't kept of who visits a sitting president at two homes in Delaware where he's spent nearly 200 days of his presidency. https://t.co/PD7d9E8xW6

Distress cal[L]s to others will [d]o you/family no good at this stage.
We know whe[R]e you/the family are at all times and can hear you breathing.
Q_D7g^-_%19FZBx_decline