Ep 2828a – Right On Schedule, The [CB] Agenda Has Been Accelerated, Watch What Happens Next

The people rising up around the world, the [CB]/[WEF] are racing against the clock. They know the only way to go is to move forward as quickly as possible, but they need the US, this is has failed before it got started. The [CB] will be brought to a screeching halt because the US has the constitution. The [DS] has lost the people, the fake news does not work on the people anymore, we are beyond the point of censorship, it is not working. The patriots have prepared multiple October surprise(s), they are now prepped and warmed. The [DS] is going to get hit hard as we get closer to the midterms. August is traditionally a hot month.

PANAMA: Mass demonstrations underway as citizens rise up against the government over high inflation which increased the cost of food, fuel, and basic services.

Panama is on the verge of collapsing.pic.twitter.com/EHS0kyJPlH

Doocy to Karine Jean-Pierre: "But, so, ultimately, we get back from this trip. There's no new peace talks in the Middle East. There's no new commitment to increase oil production in the Gulf. So, what was the point of this trip?" pic.twitter.com/QV0xFlOiHA

Your own Energy Secretary @SecGranholm said “The president doesn't control the price…" so is she lying or are you lying? https://t.co/ffXMWy7jXQ

Checking on gas prices in Saudi Arabia. 2.33 Riyal per litre. About 62 cents US. Watch. pic.twitter.com/G19PJWzLAb

The redline is when Biden took office. pic.twitter.com/kbPFeocajl

Cost-of-living increase for Social Security may push seniors into higher tax bracket, say experts – (This is another reason why the Left loves inflation–more tax revenue!)https://t.co/Ie97vczy9d – @washtimes

Schwab said that the world is facing multiple crises and the WEF is willing to deepen cooperation with China to play an active role in addressing climate change, promoting industrial transformation & social equity. https://t.co/mnEvHHm2BX 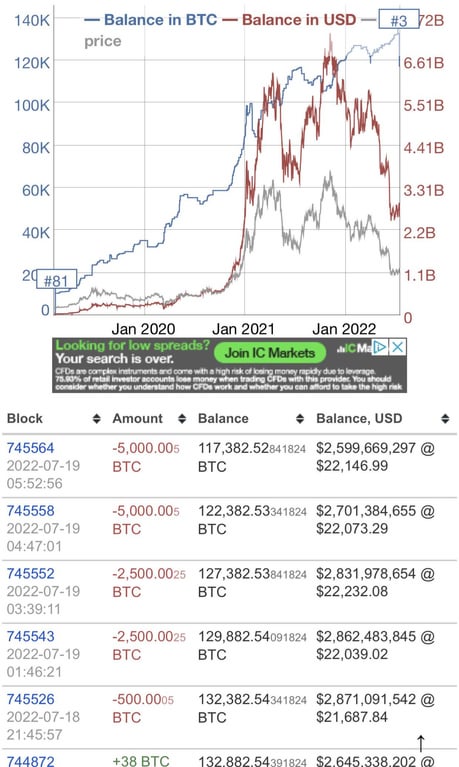 But Chinese business records contradict Clark’s claim. “Chinese site Qixin says the latest filing comes from BHR itself and that it was filed last month,” the Washington Examiner reported. “The 2021 annual report by BHR has an ‘announcement date’ of June 20. Skaneateles is still listed as a ‘shareholder’ with a 10% stake.”

China’s business registry may not have been changed to reflect Hunter’s vacated interest. But with Hunter’s global profile as the United States president’s son, the omission seems unlikely.

It should be noted that Hunter’s representative has also refused to say who bought the stake in the company and for what price.

AOC PRETENDS to be *handcuffed* in fake arrest protesting Supreme Court — then raises her fist, breaking her fake handcuffs

DHS decides today there was no need for its unconstitutional Disinformation Board after all pic.twitter.com/O1hjIywch2

Hero Who Stopped Indiana Mall Shooter Identified as 22-Year-Old Eli Dicken, Trained in Firearm Use by his Grandfather

China issues another warning to US

From the US Attorney’s office: “We do not believe it is probable that the Office would be able to obtain and sustain convictions on these charges.”

Colbert’s team unlawfully entered J6 committee hearing after they were denied press credentials. They were kicked out of one building then entered another where they remained until 8:30pm when they were arrested. Reports crew banged on doors, windows of GOP lawmakers’ offices: https://t.co/gdtayy5upr

House GOP Conference Chairwoman Rep. Elise Stefanik (R-N.Y.) has called out Rep. Bennie Thompson (D-Miss.), chair of the Jan. 6 Committee, questioning why House Speaker Nancy Pelosi (D-Calif.) has remained “off-limits” from the committee’s scrutiny over the events that led up to violence on Jan. 6, 2021.

“You have only one office that’s off-limits to investigation and that office is Nancy Pelosi’s office,” Stefanik told Fox News’ “Life, Liberty and Levin” on July 16.

“[W]e know that the speaker’s office was made aware of potential threats, potential violence that day. They failed to do their job to ensure the Capitol Police had the support they needed to secure the Capitol,” Stefanik said.

“And they have not turned over the communication with the sergeant at arms office.”