The UK elections are ongoing and the numbers are not in yet, but the projections are in favor of BJ. Trump and the patriots are moving forward with the economic plan, remember the patriots are setting a manufacturing supply chain independent of China. The Fed says no rate hikes, for this year we will see for next year. The [DS]/Dems are moving forward with their agenda, pushing impeachment and the MSM is scrambling, they are trying to keep the narrative that the dossier was not used, but the IG report refutes this. Barr decided to redact information in the IG FISA report, he allowed the dates to be shown and other info, which expands the coverup. The [DS] is being pushed out of the darkness and into the light, nothing can stop what is coming, nothing.

Getting VERY close to a BIG DEAL with China. They want it, and so do we!

#BREAKING: The U.S. and China have reportedly reached an agreement on the terms of a ‘phase one’ trade deal. It’s now awaiting approval from President Trump. #OANN TIME Magazine is expected to name the whistleblower, as their Person of the Year but Greta Thorneberg beat him out and many others.

Time also put those who testified in the fake impeachment hearings as guardians, this was hill, vindman, taylor and yavonovitch 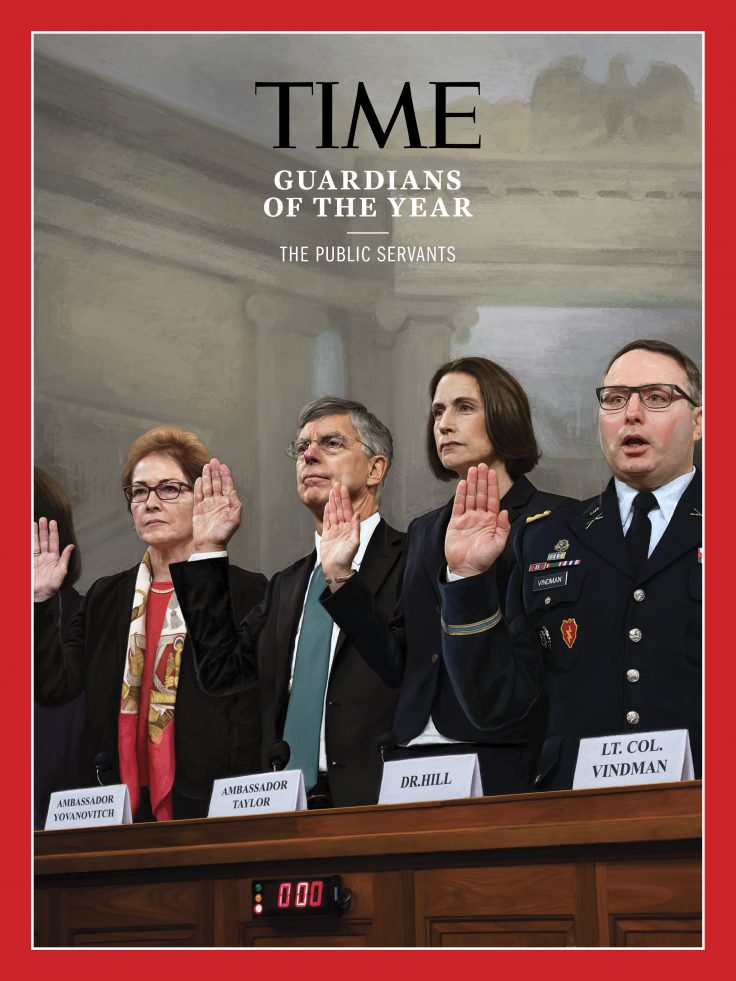 The MSM is trying to control the narrative, by placing these individuals are the cover they are trying to reinforce everything they have been trying to push, but as we can see with the rating from other MSM outlets it is not working, people are waking up, and this is their biggest fear, because once people are woken up you can’t put them back to sleep and this is what happening now.

Today we had the fake impeachment article of impeachment and the [dS]/dems are digging their hole deeper and deeper, they are exposing themselves, this is part of the plan, Nadler decided he was not going to abide by the rules, which Calls for Minority Hearing on Impeachment, it is being reported that some dems are now questioning the vote on impeachment, remember the Dems/dS they are trapped, vote for impeachment it goes to the senate, if the senate decides to have a trial its all exposed, if vote fails and there is no impeachment, their plan fails, the patriots push forward with presenting the declas and criminal investigations and they can’t use the impeachment as the block.

JUST IN: Hunter Biden’s Baby Mama Lunden Roberts Will Get to Grill Biden UNDER OATH About Money He Made From Burisma

Dems Veronica Escobar and Jackson Lee purposely misquoted my call. I said I want you to do us (our Country!) a favor, not me a favor. They know that but decided to LIE in order to make a fraudulent point! Very sad.

“New Polls Say Most Americans Oppose Impeachment.” @foxandfriends I did nothing wrong. This will be the first Impeachment ever where there was no crime. They don’t even allege a crime. Crazy!

FISA report is out and it lays out some of the players, what they did, how they did it, how it was illegal and how the IG referred invidivuals to the DOJ to be brought up on criminal charges, remember this is all about inflicted pain on the DS and now we see the DS react to the FISA, they now know Trump and the patriots are following through on this, they are panicking.

Ever since he was appointed Attorney General and demonstrated that his loyalty is to Donald Trump and not the interests of justice, I have warned:

When it comes to the rule of law, Bill Barr is the second most dangerous man in the country.https://t.co/T1du4ElN72

Make sure your family and friends see the evidence for themselves:

The president asked a foreign power to interfere in the 2020 election for his own political gain.

Americans deserve free and fair elections. He must be held accountable. https://t.co/ul8GzrsOKG

Since the FISA report was released and Horowitz testified  many of the MSM outlets are putting out corrections, of course this is small print at the bottom so nobody can see it and some are sticking to the narrative, CNN put out a correction

“this story incorrectly stated that the IG report did not provide evidence that the FBI had its informants wear a wire to record conversations…It has been corrected to include that the report says FBI informants recorded their conversations” pic.twitter.com/AKVM1VpuJn

Techno fog reminds us that Stefan Halper had a drug problem

Look what we have here…

And this is very curious – I requested the case file and was instructed it had been destroyed. Why was Halper’s file destroyed? pic.twitter.com/ciqaWlurb5

BREAKING: Carter Page and George Papadopoulos dispute IG Horowitz’s finding that they were “consensually recorded” by FBI informant Stef Halper. Halper did not ask, and they did not consent to his recording their conversations. In fact, Page told me, “NOTHING was consensual.”

Apparently the DOJ and FBI had a change of heart about the FISA dates.

Now, when SSCI Security Officer James Wolfe was indicted (unsealed June ’18), we could see the importance of the March 17th date again:

WASHINGTON — The primary liaison between the Justice Department and the special counsel’s office is set to step down at the end of the month, after helping oversee the department’s most consequential and controversial investigation in a generation.

Congratulations to JUDGE LAWRENCE VANDYKE on being confirmed to the Ninth Circuit. Great job!

Those Responsible for the Coup Attempt Will be Punished

2 thoughts on “Barr Just Did Something Interesting, [DS] Pushed Out Of The Darkness Into The Light – Episode 2044”