Skip to content
Reports
December 9, 2020 x22report
SPREAD THE WORD
112,250
The US economy is continuing to improve. Jobs are opening up and they have surged by 158k. The [DS]/[CB] are pushing the Great Reset using covid as the catalyst. What happens when you remove the catalyst and the pandemic disappears, what happens to the Great Reset. The [DS]/[MSM/SM] are panicking, they are now moving to full censorship. All assets are deployed. The lawsuit brought by Texas is a game changer and more and more states are joining the lawsuit. Trump has already announced he will intervene. The constitution is the only way forward. The [DS]/[MSM/SM] companies are ready to move their agenda forward to keep the narrative. Rig for red, central communication blackout, zero day is approaching. NEVER have we EVER witnessed the shutting down of the entire economy. Italy did not shut the entire country – it was limited to Naples. There is absolutely NO historical precedent for using a disease to change the economic system. This is all because their fiscal management of borrowing year after year with no intention of paying back has come to an end. To hide their mismanagement, we must surrender all our rights. They simply ran out of other people’s money.

Alarming stuff about the Bidens’ ties to Ukraine & China.🔻 pic.twitter.com/hXjsbRFUkG 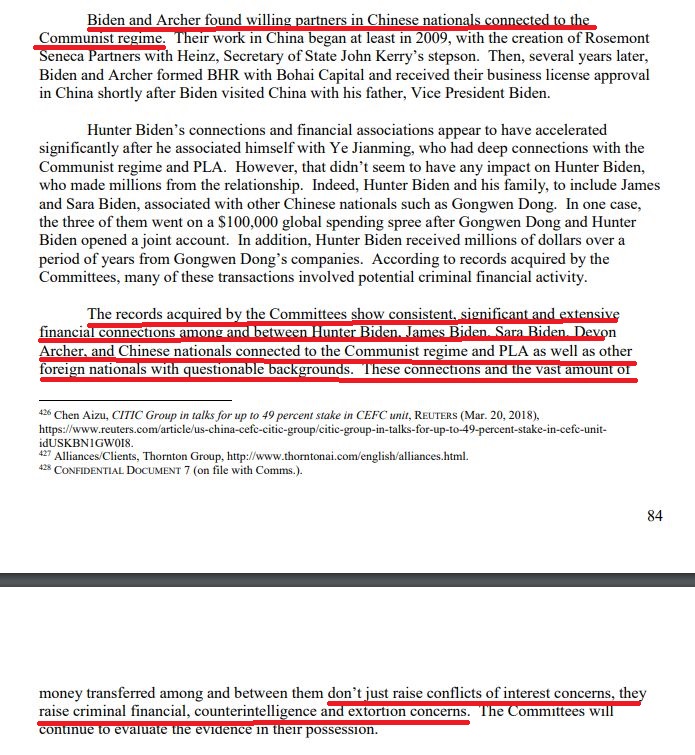 Just Michigan state house rep Cynthia A Johnson casually THREATENING “trumpers” and calling on her “soldiers” to “do it right… make them pay”. https://t.co/t7RIk7E7QE

Why did Michigan State Representative Cynthia Johnson present TRIBUTES to the Chinese Consul General in Chicago? 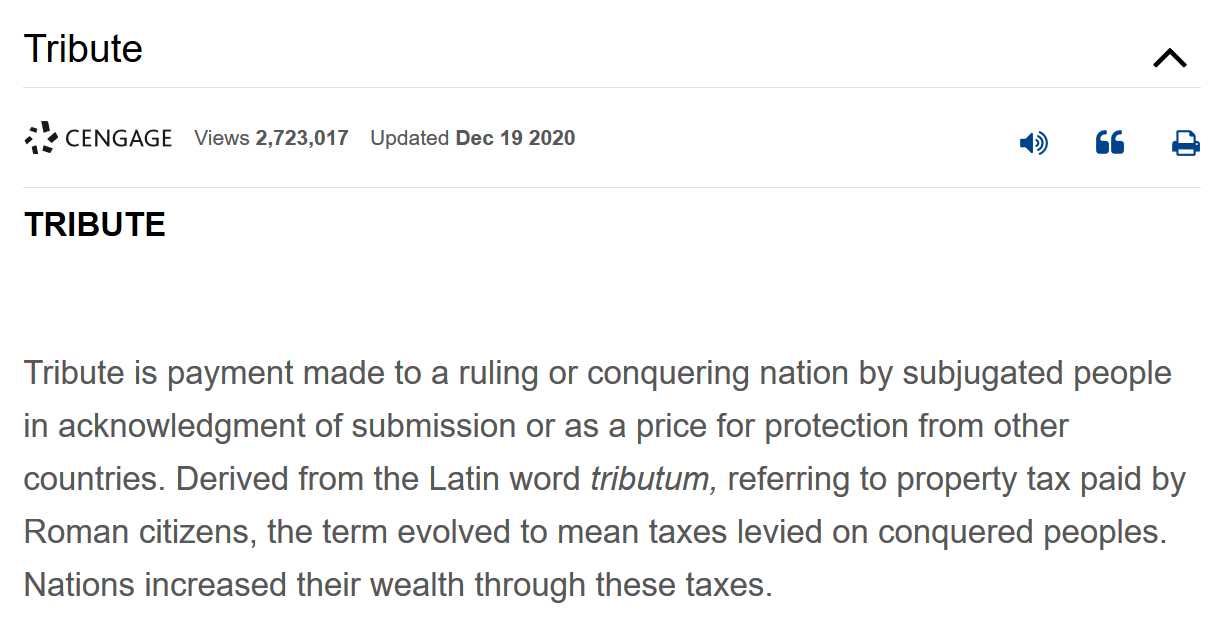 Threats to Democrats or Republicans are unacceptable and un-American. They’re even more unbecoming of an elected official. Rep. CA Johnson has been stripped of her committees and we’re looking into further disciplinary action as the proper authorities conduct their investigation. pic.twitter.com/Y5lTqqmEVI

“Zhao Jian explained [to Gov Whitmer] the current situation of Chinese-American relations, emphasizing the benefits of mutual cooperation, clarifying that any struggle will hurt both countries, and that COOPERATION IS THE ONLY CORRECT ANSWER.”

The Supreme Court has rejected a Pennsylvania Republican congressman’s request to prevent Pennsylvania from certifying its presidential election results in favor of Joe Biden.

This case is different from the lawsuit filed by the state of Texas this morning. https://t.co/ReS0eU0JsY pic.twitter.com/ybt6Dvlom4

This was not my case as has been so incorrectly reported. The case that everyone has been waiting for is the State’s case with Texas and numerous others joining. It is very strong, ALL CRITERIA MET. How can you have a presidency when a vast majority think the election was RIGGED? https://t.co/ZKu9sNVz2U

The Supreme Court only denied emergency injunctive relief. In the order, it did NOT deny cert.@MikeKellyPA’s suit is still pending before the U.S. Supreme Court.https://t.co/UNMZeuiDVy

Uncharacteristically flying under the radar, Trump/Pence sue Biden/Harris in Wisconsin.

Wisconsin has strict absentee ballot rules which Trump and Pence claim were violated in certain counties. 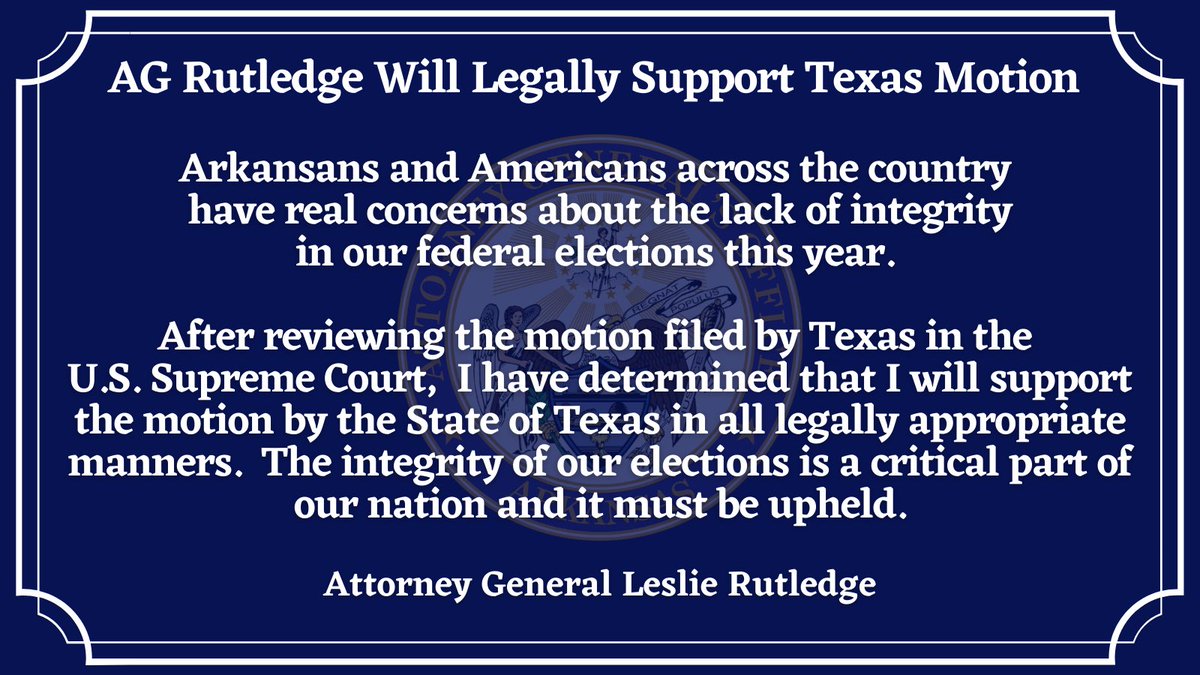 JUST IN: 17 states have filed a brief backing Texas’ effort at the Supreme Court

Breaking Down The Texas Lawsuit:

The ONLY court that can hear the #TexasLawSuit is the Supreme Court of the United States. When a case is between two or more states, the Supreme Court holds both original and exclusive jurisdiction, and no lower court may hear such cases. SCOTUS does not have discretion to ignore

Its amazing, nobody saw this coming, Texas under the radar  unveiled an election integrity lawsuit against four battleground states, The MSM, Ds were very busy looking at the other cases and bragging how all of those cases were losing in the lower courts.

So this one lawsuit which was brought by a state goes directly to the Supreme court.   the US Supreme Court where  conservative justices await in every swing state where the eIection is in question

We will be INTERVENING in the Texas (plus many other states) case. This is the big one. Our Country needs a victory!

CNN national security reporters @ZcohenCNN and @kylieatwood haven’t tweeted that @ericswalwell is caught up in a spy scandal.

They try and help him by ignoring his role in a national security crisis but it only shows their bias.

Everything they do is to cover for Democrats.

The Swalwell Scandal isn’t about a one-off dalliance w/ a Chinese spy.

It’s that 1) he and the woman dated, 2) she bundled political cash for him, 3) she seeded staff into Capitol Hill, & 4) he serves on the Intel Committee.

Oh, and 5) Pelosi knew about the whole damn thing. pic.twitter.com/08nD0m9x50

Swalwell, who sits on the House Intel Committee, and is privy to America’s most closely held secrets, is 100% compromised. He did everything in his power to destroy the lives of anyone who worked for @realDonaldTrump over the past 4yrs with lies, lies, lies—as China owns his ass! https://t.co/NExadOCDnv

Republicans need to flip just 5 seats for a majority in House. Once Swalwell is gone, that makes it 4. I think after the dust settles from all the civil, criminal & congressional fraud investigations, there is a good chance in early 2021, Republicans will have a federal trifecta. https://t.co/5GvWLjKcjT

If somebody cheated in the Election, which the Democrats did, why wouldn’t the Election be immediately overturned? How can a Country be run like this?

Michael Pillsbury will become the new chair of the Defense Policy Board.

The Senate was the target.

“If authorized, tens of millions of vaccine doses will be available this month . . . and hundreds of millions more will quickly follow. Every American who wants the vaccine will be able to get the vaccine.” pic.twitter.com/Ofo2Opbbir

The same people that are out here yelling “my body my choice” will be telling you that the government has a right to force vaccinate you for a virus that has a 99% survival rate.

I give it two months.

We’re Not Gonna Take It

Make no mistake, the rest of Big Tech will be following Youtube’s lead shortly.
Eventually Trump’s twitter account will be removed, and a full-on black out by Big Tech will be put into motion.

Prepare alternate means of communications now so you arent caught off guard.