Ep 2900b – Deep Dark World Is Being Exposed, Freedom Of Information [truth] = Game Over Ep 2900a – Trump: Taxes Have Consequences, [CB] On Deck
The people around the world are rising up, the more the [CB]/[WEF] push the worse it will be for them. The Biden administration have lost the economic narrative. The [CB] is in focus, another [CB] is removed for illegal activity. Trump mentions taxes and that they have consequences. The [DS] is struggling, J6 is not working the people are not buying what they are selling. The [DS] is struggling and they want Trump indicted before the midterms. They have deployed everything they have but it is not working. Truth social is the bull horn, its getting strong and stronger as the truth comes out the people will learn that world they live in is deep and dark and those in control are criminals. Once the people learn the truth the game is over.

Discovery Executive: "He does not have a place in the new CNN. He reminds us of the Zucker period we are looking to move far from. The only reason he is still on air was not to look like we were 'cleaning house' for political reasons right after the closing"

The person this Discovery exec was talking about is Jim Acosta. CNN (like they did when I reported about Stelter being let go) will be to defend the person. That’s what network PR people do. Keep in mind many of the recent people let go had big support within the network /more

Day 3 of the Igor Danchenko false statements trial started with the testimony of Democrat activist and Clinton ally Charles Dolan. For background, Dolan has historic ties to the Democrat party, was a state chairman of Bill Clinton’s 1992 and 1996 presidential campaigns, and was an advisor to Hillary Clinton’s 2008 presidential campaign.

And he was also a source for the Steele dossier.

Dolan’s connections to Russia began from his consulting work, where he served to attract foreign investments into Russia in the 2000s. As part of that job, he would have regular conference calls with the spokesman for Russian President Vladimir Putin and had occasional meetings with other Russian officials. Other work, such as assisting Disney in obtaining a broadcast license, would keep him connected to Russia.

Dolan was introduced to Igor Danchenko through Fiona Hill in the spring of 2016. I’ll let Dolan explain:

That friend Danchenko was trying to assist was a woman by the name Olga Galkina. Dolan would eventually meet with her in Cyprus in March of 2016. Galkina would eventually become relevant to the Dossier story.

Danchenko and Dolan kept in touch, meeting from time to time. Part of the reason they stayed connected was because of the “potential opportunities” Dolan’s firm (kgobal) and Danchenko’s employer, Orbis, might pursue. (The business opportunities never presented themselves.)

In May 2016, Dolan reached out to Danchenko because he would be traveling to Moscow to attend a conference at The Ritz-Carlton. Dolan eventually traveled to Moscow in June 2016. At that time, Danchenko was already in Moscow and the two met in that city. Dolan returned to the US and he and Danchenko remained in occasional contact.

All this background information was necessary to help establish the Dolan-Danchenko relationship. From there, Special Counsel Michael Keilty produced an e-mail where Danchenko reached-out about the Trump campaign:

"We had been instructed at the [Mueller] SCO not to take further action on the matter involving Mr. Dolan and Mr. Danchenko's relationship." pic.twitter.com/658G4nXqRi

Perhaps Robert Mueller was lying when he said the Steele Dossier wasn't in his "purview."

But there's no doubt – what he told Congress was 100% false. His team conducted an extensive Steele Dossier investigation. pic.twitter.com/kOhDgN5liX

So the question is, what is on the recordings?

Will these recording be released?

So what do we know so far

Don't think the repercussions of Danchenko's 3.5 year stint as the FBI's go to guy for Russia have sunk in yet:

American tyranny, in a nutshell

Those who provided Hunter w/ underage girls [trafficked?] _same people who also took the pictures?
If large sums of money are being paid by foreign [state] actors [to protected [in powerful positions] US pols] would they want assurances the deal will be kept?
Bribes & blackmail.
Dark secrets.
Q
Source: dailycaller.com 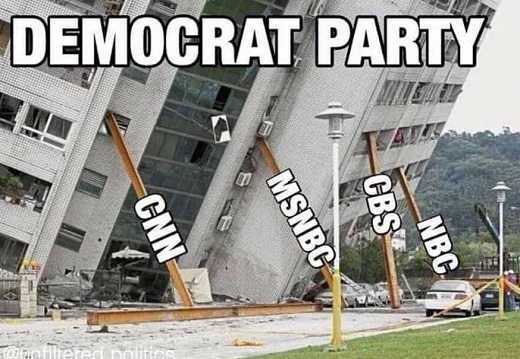 ITALY  In case you missed it, yesterday Italians took part in an anti-NATO demonstration as well as EU policies affecting the economy.

For those who think Russia is pushing propaganda & that their “invasion” was “illegal”. These are the kind of people the US & NATO are defending, to the detriment of their own people of course. And this is what Russia is trying to stop from coming into their borders. https://t.co/dWvlH1Sd5C

BREAKING: Xi Jinping opens CCP summit by announcing full control of Hong Kong has been achieved, that Taiwan is next pic.twitter.com/Y5PGVXg9Sj

The Biden administration extended the Covid-19 pandemic’s status as a public health emergency for another 90 days, preserving measures such as expanded Medicaid and higher payments to hospitals.

Biden used emergency covid declaration to enact student loan forgiveness and this is why Scott Pelley is a bad journalist and interviewer. https://t.co/ZCpdvrqf0S

The Positivity Tracker includes Aegis PCR and Rapid NAAT test results at Walgreens stores. Below is the breakdown:

Vaccinated: Last dose is on or longer than 12 months:

CDC head: US ‘ripe to have potentially a severe flu season’

Why are CDC numbers conflating COVID-19 deaths with influenza, pneumonia, other?
Why are influenza deaths at [all-time] historical low levels vs years past [outside of standard deviation]?
Why are COVID-19 tests returning positive results on pawpaw’s and animals?
Why are [select] swing states undergoing heavy quarantine extensions?
Why are possible [treatments][cures] being prevented and attacked [USA]?
“Testing, Testing, Testing, Tracing, and Isolation.” – [Pelosi]
Q
Source: thegatewaypundit.com

Nancy Pelosi: "I’m gonna punch him out. This is my moment. I’ve been waiting for this." pic.twitter.com/jIfxRphifi

"There are large numbers of text messages between the police and Pelosi staff…those may be the Holy Grail of where Republicans finally find out what really happened…" @jsolomonReports pic.twitter.com/ZCrpzBecbk

So Nancy Pelosi refuses Trump’s request for a national guard presence on Jan 6 & simultaneously has a documentary film crew in her office where are you can hear her poorly delivered tough guy act… I’m sure I’ll be called conspiracy theorist for thinking this isn’t a coincidence!

TRUMP RESPONDS TO JAN. 6 COMMITTEE: ‘WE DEMAND ANSWERS ON THE CRIME OF THE CENTURY’

“This memo is being written to express our anger, disappointment, and complaint that with all of the hundreds of millions of dollars spent on what many consider to be a Charade and Witch Hunt, and despite strong and powerful requests, you have not spent even a short moment on examining the massive Election Fraud that took place during the 2020 Presidential Election, and have targeted only those who were, as concerned American Citizens, protesting the Fraud itself.

Those who committed the Fraud, thereby having created the Crime of the Century, go unblemished and untouched, but those who fought the Crime have suffered a fate that was unthinkable just a short time ago. We have a two-tier system of Justice in the United States that cannot be allowed to continue.

A Majority of people in our Country say that the Presidential Election of 2020 was determinatively dishonest, including the fact that many Legislatures were overridden by local and State politicians and judges on vital regulations and requirements, which is totally illegal and UNCONSTITUTIONAL.”

President Trump also pointed out that since 1888, “no incumbent President has gained votes and lost reelection.” He drew attention to his sweeping victory of four bellwether states, including Iowa, Florida, Ohio, and North Carolina, as well as 18 of 19 bellwether counties in 2020.

“No work was done by the Committee on Election Fraud,” Trump continued. “We, and a huge portion of the American people, simply asked that it be a part of your Committee’s work. It wasn’t.”

The letter listed numerous examples of evidence of election fraud and ballot problems recorded in the 2020 election in states like Arizona, Georgia, Michigan, Pennsylvania, and Wisconsin.

“You have not gone after the people that created the Fraud, but rather great American Patriots who questioned it, as is their Constitutional right,” Trump stated, scorching the committee’s inaction.

He concluded, “The people of this Country will not stand for unequal justice under the law, or Liberty and Justice for some. Election Day is coming. We demand answers on the Crime of the Century.” 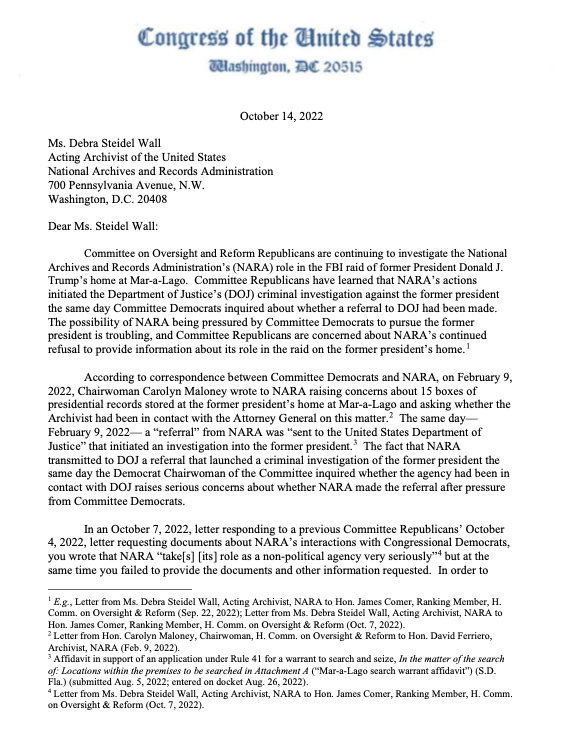 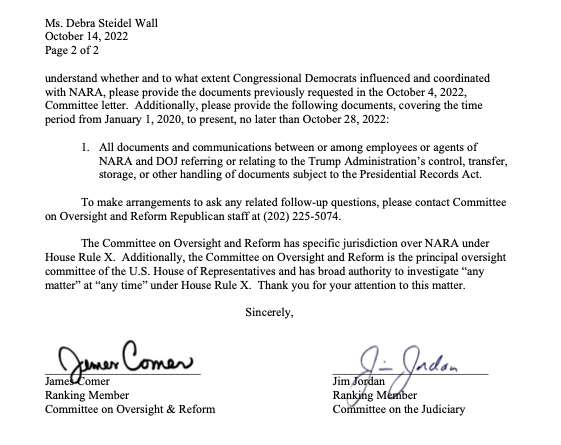 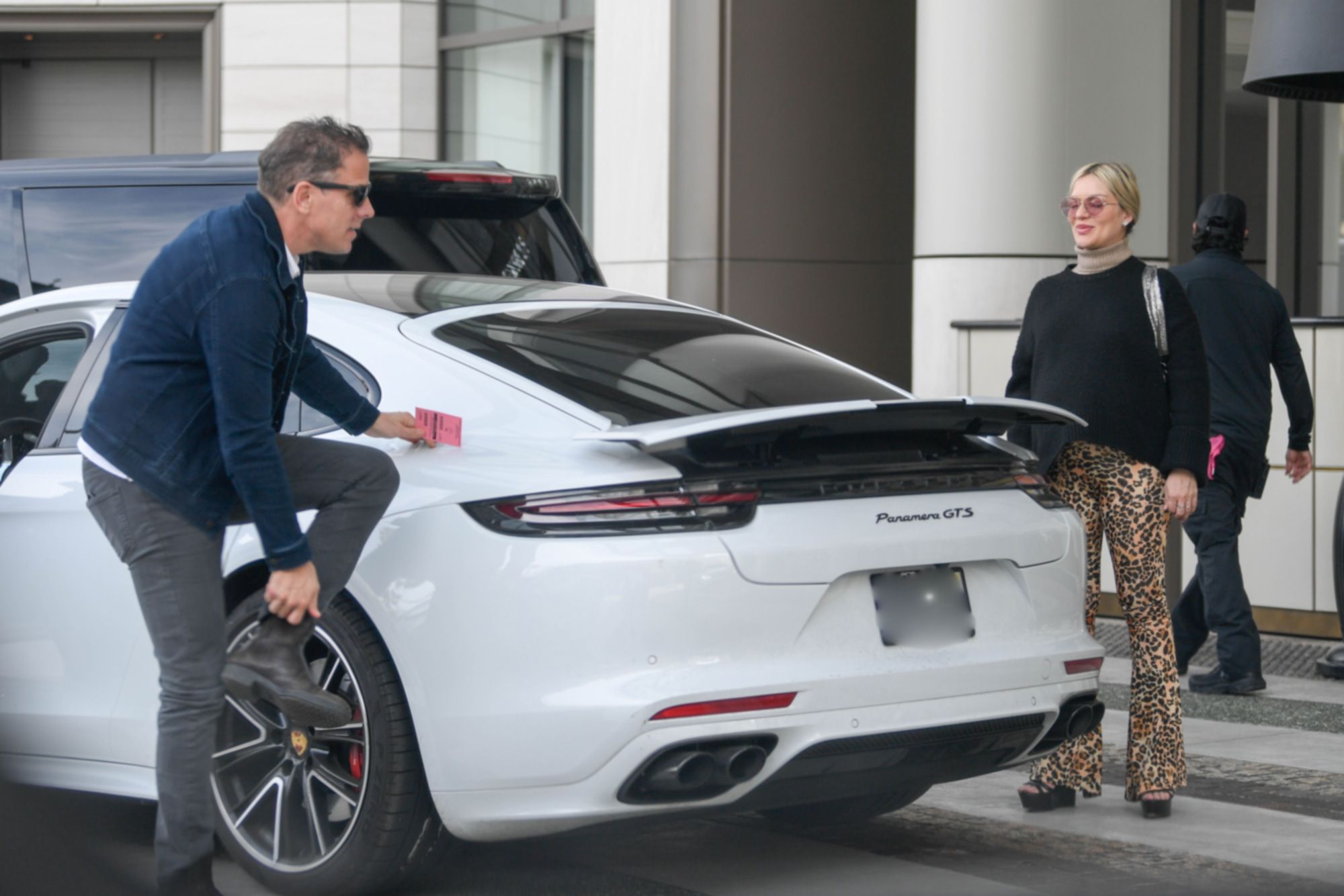 https://www.theusconstitution.org/wp-content/uploads/2018/01/The-Text-and-History-of-the-Foreign-Emoluments-Clause.pdf
“America’s Founders believed that corruption and foreign influence were among the gravest threats to our nation.”
Q