Ep 2851a – We Are Witnessing The Restructuring Of The Economic System
The D’s that voted for the Inflation Expansion Act cannot even explain how it reduces inflation, that’s because it does the opposite, it will force people to pay more in taxes and expand inflation. We are witnessing the restructuring of the economic system. The [DS] is now trapped, Trump is exposing the corrupt, they people are starting to see it and believe it. Sometimes you must show the people. He is forcing [DS] out of the shadows and into the light. The election fraud case is getting strong and stronger, it’s now being proven that a foreign government was working with the [DS] players to overthrow the US government. Trump sends messages, leaves out the letter R, which stands for Renegade.

So now we are getting a picture that the CCP was involved in the election, Mike Lindell met with Trump many times and he continually claims he as the PCAPs. The data that shows that the CCP did interfere in the elections. With all of the information from the PIT and what Mike says he has are they building the case, narrative and at the right time release it all, timing is important.

First Lady Jill Biden has tested positive for Covid-19 and is taking Paxlovid, according to her office. pic.twitter.com/1TfrWMbSBc

BREAKING: First Ever Class Action Lawsuit Settlement Against Vaccine Mandates is Reached in the United States

The case centers around workers at NorthShore University HealthSystem, who filed a lawsuit in October 2021 claiming their employer illegally refused to grant any religious exemptions to a COVID-19 vaccine mandate. As Fox Business reported:

NEW: According to an FBI informant, the Michigan State Police allowed armed protesters into the Capitol in Lansing on April 30, 2020, at the specific request of the FBI, which wanted to "de-escalate" the situation. pic.twitter.com/MAGn8bcmrx

It was headed at the time by Steven D'Antuono.

He was promoted to take over DC FBI field office in October 2020–right before the Capitol protest.

Who made this call? https://t.co/OWZd3tnrj4 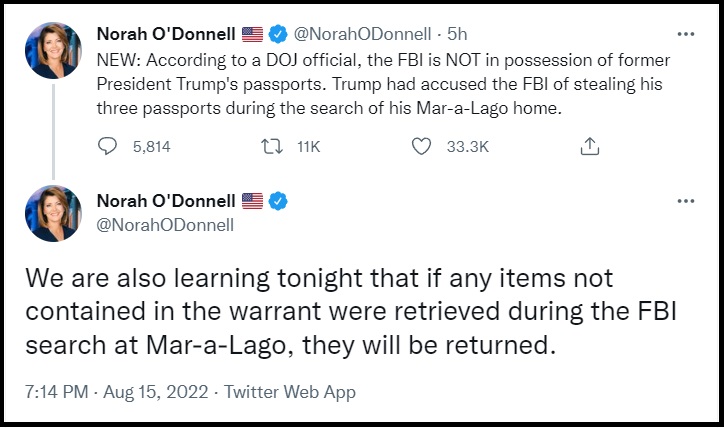 FBI took the passport of a former president and kept it for a week.

This is not ok by any stretch but FBI acts like this is SOP and the media is like 🤷‍♂️ https://t.co/fKWuMYuA6I

BREAKING: The passports were not itemized on the FBI’s property receipt of items seized. The warrant did not state the FBI could take Trump’s passport. Typically, the government needs a separate court order to seize someone’s passport, even temporarily. https://t.co/QfdtEd7oOo

BREAKING: Court sets in-person hearing on @JudicialWatch and media requests for the release of the affidavit underlying the abusive Biden raid on Trump's home. Set for Thursday, August 18, at 1:00 pm.

What was the USSS codename for Hussein? [R] Define. They knew all along. Expand your thinking. Q
Renegade
A person who deserts and betrays an organization, country, or set of principles. They always knew. Q

https://www.theguardian.com/world/2014/jul/31/cia-admits-spying-senate-staffers
NEVER FORGET.
BLACK OPS AGAINST USA.
TOTAL TAKEOVER OF OUR COUNTRY.
WHAT NO-AGENCY LEAKED THE DATA?
TRAITORS ALL.
Q