The patriots have done it, the economy is now turning around, housing sales are picking up, pending homes sales are picking up, this doesn’t mean the economy has been fixed, this means Trump is using the same rate cuts and stimulus to pump the economy up. The [CB] is no longer in charge, Trump will push the [CB] for more rate cuts and stimulus. All part of the plan. The [DS]/MSM they are scrambling to control the narrative which they lost once Trump produced his transcript of the phone conversation. The [DS] plan did not go the way they thought, they never expected transparency. Trump and the patriots have another card up their sleeve, they will play it soon. The plan was to push JB, HRC, and BO out into the public and attach corruption to them. Trump needed to bring in [CROWDSTRIKE]. The whistleblower is a CIA asset, most likely placed into the WH to spy on Trump. Get ready because the next strike is coming.

All regions saw an increase in sales in August:

The DS had Acting Dir Joseph Maguire testify today, this was another big fail for the DS players, Trump countered everything they were trying to do when he released his transcript, because the transcript is the actual conversation and the whistleblower report is now meaningless and wrong in many respects, plus it was 2nd and 3rd hand information, this was planned out very carefully to trap the DS and to expose those involved in corruption in Ukraine, plus Trump and patriots needed to start pushing crowdstrike and hillary email coverup.   I believe there is another agenda behind all this and we will be discussing this a little later in this report.  but first cnn’s cuomo is now defending Biden, the MSM is now trapped and they need to spin the damaging information coming out, this will become harder and harder to do, this is planned to expose the MSM that they are fake news.

So CNN cuomo was interview Sekulow trying to make his case, big fail

BREAKING: Mitt Romney’s national security advisor from his 2012 campaign sits on the board of the Ukrainian gas company that paid Joe Biden’s son Hunter Biden $50,000 a month

Now we need to understand that Adam Schiff had the whistle blower complaint back in aug and he was sitting on it, sean davis tweeted out the following

Adam Schiff was tweeting out allegations from the rumor-mongering anti-Trump leaker’s complaint while claiming that he didn’t have access to the complaint.

What Sean Davis is referring to is that Schiff was using the information to build it all up, he leaked the information in his tweets, this is his tweet and this was Aug 29, 2019 remember he received the complaint on August 12

Trump is withholding vital military aid to Ukraine, while his personal lawyer seeks help from the Ukraine government to investigate his political opponent.

It doesn’t take a stable genius to see the magnitude of this conflict.

Or how destructive it is to our national security. https://t.co/X4yhTS2q1Z

So the Whistleblower complaint was released and it shows nothing, remember the DS plan was to have the Whistleblower testify, have Joseph Maguire testify without Trump releasing his transcript, this was suppose to be the show, they patriots trapped them, they never thought he would be transparent, once trump release the transcript their entire plan went down the drain.

Front pages of @nytimes and @washingtonpost for Thursday, September 26, 2019. 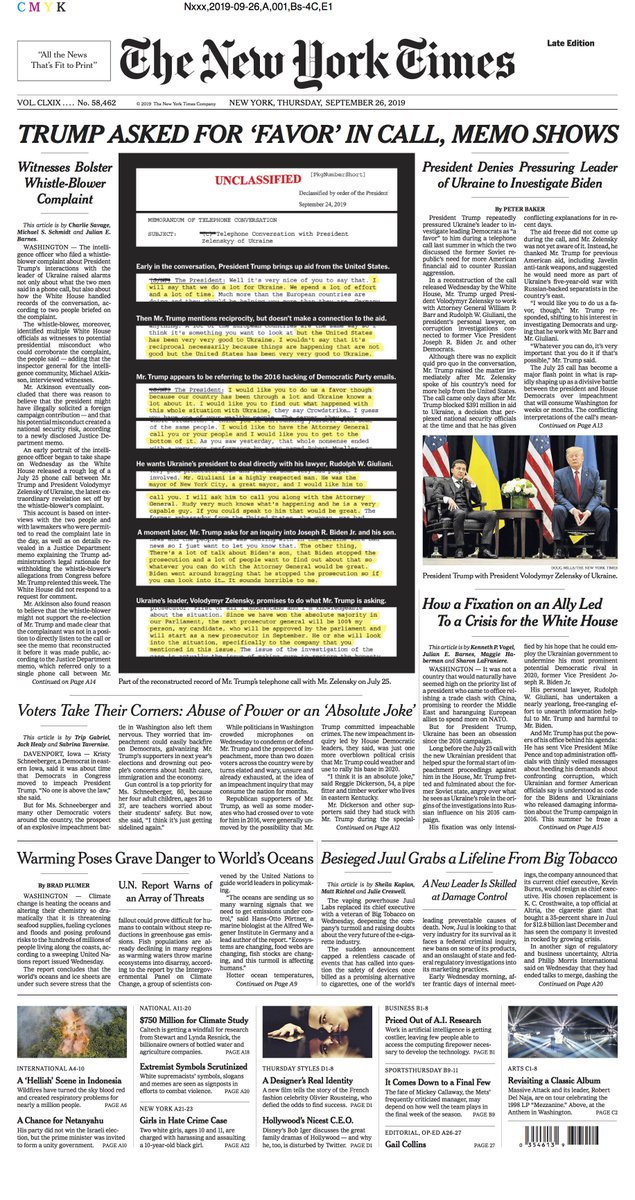 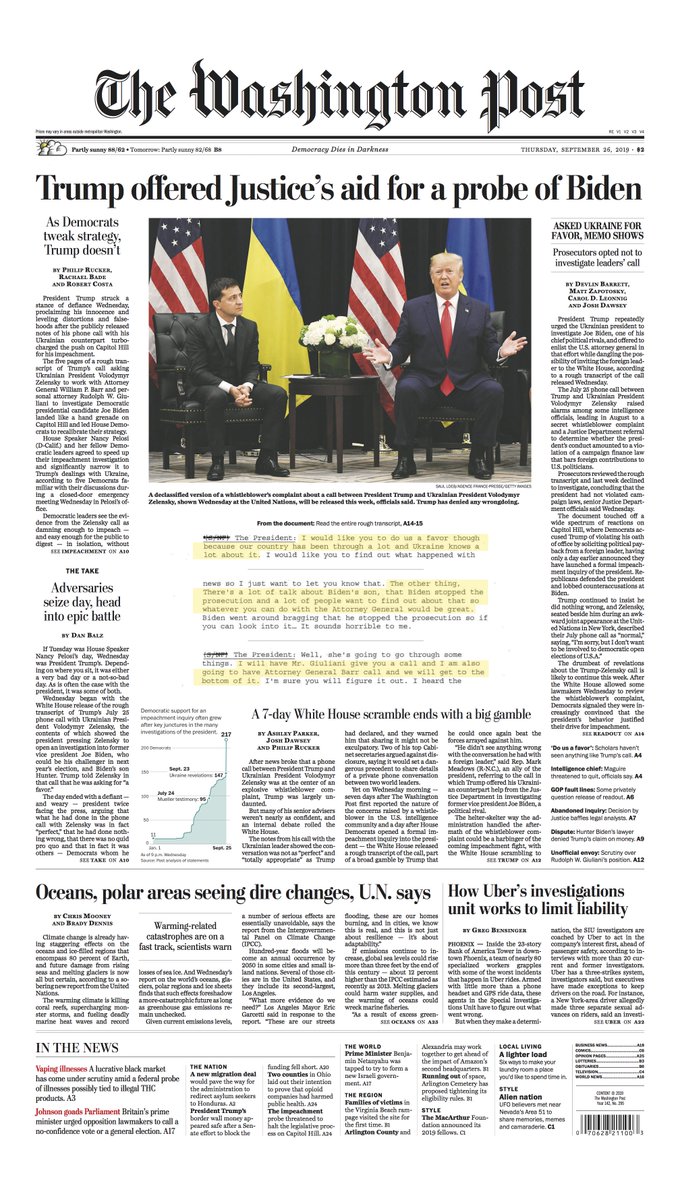 I would like you to do us a favor, though, because our country has been through a lot and Ukraine knows a lot about it. I would like you to find out what happened with this whole situation with Ukraine, they say Crowdstrike… I guess you have one of your wealthy people… the server, they say Ukraine has it. There are a lot of things that went on the whole situation. I think you’re surrounding yourself with some of the same people. I would like to have the Attorney General call you and your people and I would like you to get to the bottom of it. As you said yesterday, that whole nonsense ended with a very poor performance by a man named Robert Mueller, an incompetent performance, but they say a lot of it started with Ukraine. Whatever you can do, it’s very important that you do it if that’s possible.

And as we know this is not what the president said, So Schiff is changing the transcript of record to fit the whistleblower complaint. The never thought Trump would release the transcript

The “whistleblower” complaint reads as if it were written by Adam Schiff. @realDonaldTrump

IT WAS NORMAL. WE SPOKE ABOUT MANY THINGS…YOU READ IT, THAT NOBODY PUSHED ME, UKRAINIAN PRESIDENT

John Ratcliffe explains that all of this is 2nd and 3rd hand information, this person heard nothing and this is another wrap-up smear job, Take a listen

A whistleblower with second hand information? Another Fake News Story! See what was said on the very nice, no pressure, call. Another Witch Hunt!

“The President took the extraordinary and transparent steps of releasing the full, unredacted, and declassified transcript of his call with President Zelenskyy, which forms the heart of the complaint, as well as the complaint itself. That is because he has nothing to hide.”

“The White House will continue to push back on the hysteria and false narratives being peddled by Democrats and many in the main stream media, and President Trump will continue to work hard on behalf of the American people as he always does.” – @PressSec Stephanie Grisham

Now there are rumors that the whistleblower is actually a CIA agent, Paul sperry tweeted out the following

The question is how did this all start, was this a trap that the patriots setup to draw the Dems in to push this out to the public, it might have been, lets go back to post 836

So this might have been a trap and it worked perfectly,

Paul sperry tweeted out the following

FACT: Investigation of Burisma was NOT closed when Biden extorted Ukraine to fire prosecutor

Judicial Watch has filed a Freedom of Information Act (FOIA) lawsuit for records about the firing of Ukraine’s top prosecutor after then-Vice President Joe Biden threated to withhold aid.

The suit was filed after the State Department failed to respond to a May 7, 2019, FOIA request seeking access to the following records:

Sidney Powell chimes in with her tweet and lays it all out.

@Techno_Fog Consider this: the #Democrats are really freaking out because @realDonaldTrump @POTUS #AGBarr and#JohnDurham have caught on to the crimes of #Crowdstike and it’s role in the #RussiaHoax
and #Spygate @KerriKupecDOJ #FISAabuses #NSA 4th Amendment violations pic.twitter.com/BHezLGFadt

Graham: I Challenge Pelosi to Have an Impeachment Vote

“Is there a case for impeachment? Absolutely not! There is no high crime or misdemeanor, no crime, no extortion, no treason.” Robert Ray @FoxNews

Now Trump and the patriots have something else up their sleeves, they are going to use the treaty that Bill Clinton signed as a weapon against the DS, what is this treaty, it is the Treaty with Ukraine on Mutual legal assistance in criminal matters. 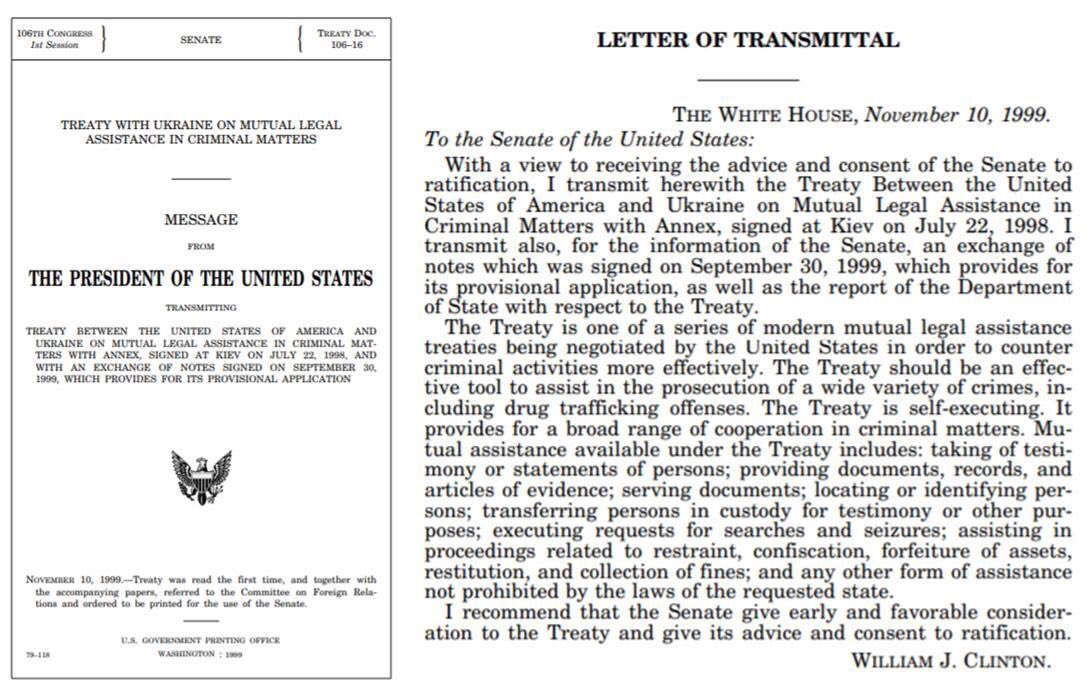 Lets talk about climate change and the predictions the scientist have made over the years. The epochtimes put out a list of failed predictions going back 80 years.

One thought on “[DS]/MSM Scrambling, Patriots Getting Ready To Strike Again – Episode 1980”