The EU/establishment are right on schedule, the BREXIT date is closing in and they have started the fear mongering. Most likely the fear mongering will intensify as we get closer to the date. The Fed has started stimulus and is creating currency and pumping it into the banks to keep them afloat. Trump mentioned at the UN that the globalist have no future, the globalist responded and they are on the defensive. The GOP has put together a letter ask AS to resign. The [DS] players are in a panic, each one is speaking up calling Trump name and pushing impeachment, those who scream the loudest. The whistleblower is a [DS] operative and the entire stage was setup for this individual to push the agenda. It is now falling apart, Trump holds all the cards and the [DS] knows it. RG has been giving clues of what he has and JS dumped his docs. The patriots want the [Ds] to push the impeachment vote, remember no crimes have been committed. This is all part of the plan to remove the blocks, this is not about a 4 year election.

The BREXIT is suppose to happen next month, and right on schedule we have those who oppose the BREXIT, the EU and the establishment, starting the campaign of fear mongering.

Is It Project Fear All Over Again? Five Stories Whipped Up by Brexit Scaremongerers

The Fed has already started stimulus to keep the economy running, the Fed has

The Fed injects another $72 billion into markets amid slowing demand

Trump is pushing the economy to the edge, why would he do this and who will take the fall, we know who, how do we know, the CB is panicking. Remember when trump said that globalist have no future. take a listen

It seems the globalist decided to defend their position, remember Trump is talking to the Central bankers.

Why do the CB/globalists want immigration,

When the Fed employees talk about the economy they are talking about a CB economy, they are telling what they need to keep their system running, not a sound money system.  The CB received the message form Trump and they are on the defensive and they are panicking.

The Patriots have hit a nerve, the [DS] players are speaking out and they are attacking Trump, they see the writing on the wall and every attempt to stop Trump has failed, PAIN is coming, All evidence points to Biden, Obama, Clinton and Brennan, as the patriots continue to push we might see some individuals come down with some type of illness.The whistleblower was a sleeper agent in Whitehouse, the sleeper has been exposed, as the DS continues to push impeachment, continues to push the whistleblower they are doing exactly what the patriots want, they are exposing themselves, we will be talking about this a little later in this report, but first we know that AS when chairing the hearing on the whistleblower complaint he made up some of Trumps telephone transcript, now there are calls for him to resign. 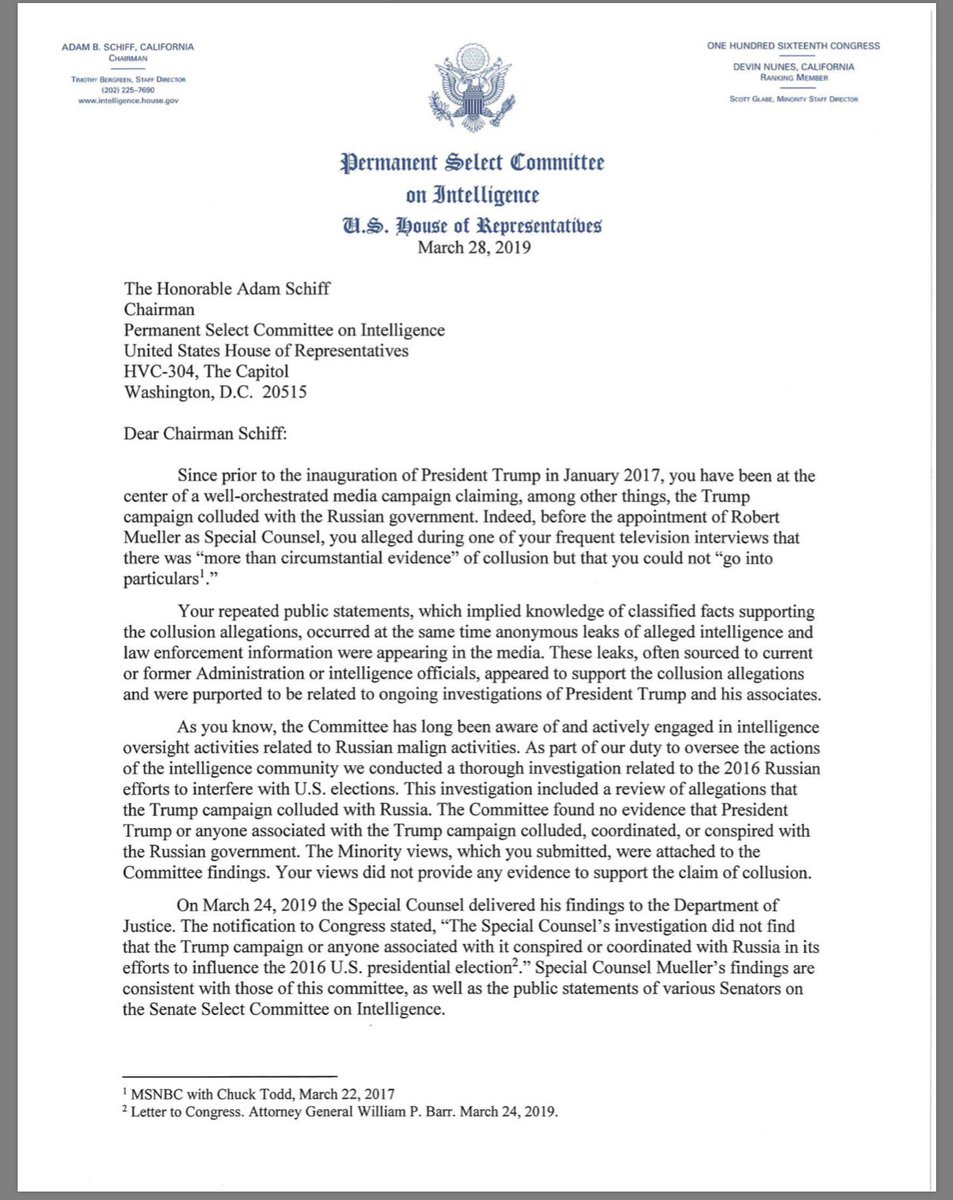 Trump chimed in and tweeted out the following

Rep. Adam Schiff fraudulently read to Congress, with millions of people watching, a version of my conversation with the President of Ukraine that doesn’t exist. He was supposedly reading the exact transcribed version of the call, but he completely changed the words to make it…

…sound horrible, and me sound guilty. HE WAS DESPERATE AND HE GOT CAUGHT. Adam Schiff therefore lied to Congress and attempted to defraud the American Public. He has been doing this for two years. I am calling for him to immediately resign from Congress based on this fraud!

Now the DS/Dems are following the patriots plan, they want them to push impeachment, they want a vote, and it seems it is working…

Source: breitbart.com
The DS players are in a deep panic, they know that they need to setup a block, impeachment takes a while, this is why all the same players are out their pushing impeachment.

Democrats & Republicans (those who have a conscience) need to work together to prevent desperate moves by Trump that could wreak further havoc.

Current events bring back my first impressions of this President. pic.twitter.com/AwFGPAdbjO

Then we have Hillary, remember Trump mentioned, crowdstrike, server in Ukraine, HRC emails

Now there are alot of people going over the whistleblower complaint and there are many anomalies.

Now RG is dropping clues with his tweets, remember they have it all, they know it all, RG tweeted out the following

Why does this text and date render the hearsay so-called whistleblower useless and not credible? If you get even one reason I might recommend you for Law School. Two and it’s LawReview. Answers later. Watch Laura at 10 pm. pic.twitter.com/fN1kOtclaM

Hint: check date against complaint and it tells you the hearsay complaint is not credible. Illustrates why hearsay is unreliable and proclaiming credibility is the result of bias. Most you can say is I can’t tell.

Sounding more and more like the so-called Whistleblower isn’t a Whistleblower at all. In addition, all second hand information that proved to be so inaccurate that there may not have even been somebody else, a leaker or spy, feeding it to him or her? A partisan operative?

Then we have stephen McIntyre that noticed something odd about the whistleblower urgent concern form, he tweeted out the following

Here is something seriously strange. The Disclosure of Urgent Concern Form located earlier today at DNI is only two days old according to its pdf properties. https://t.co/l8foAAj2sC pic.twitter.com/0iwXTxcgIv 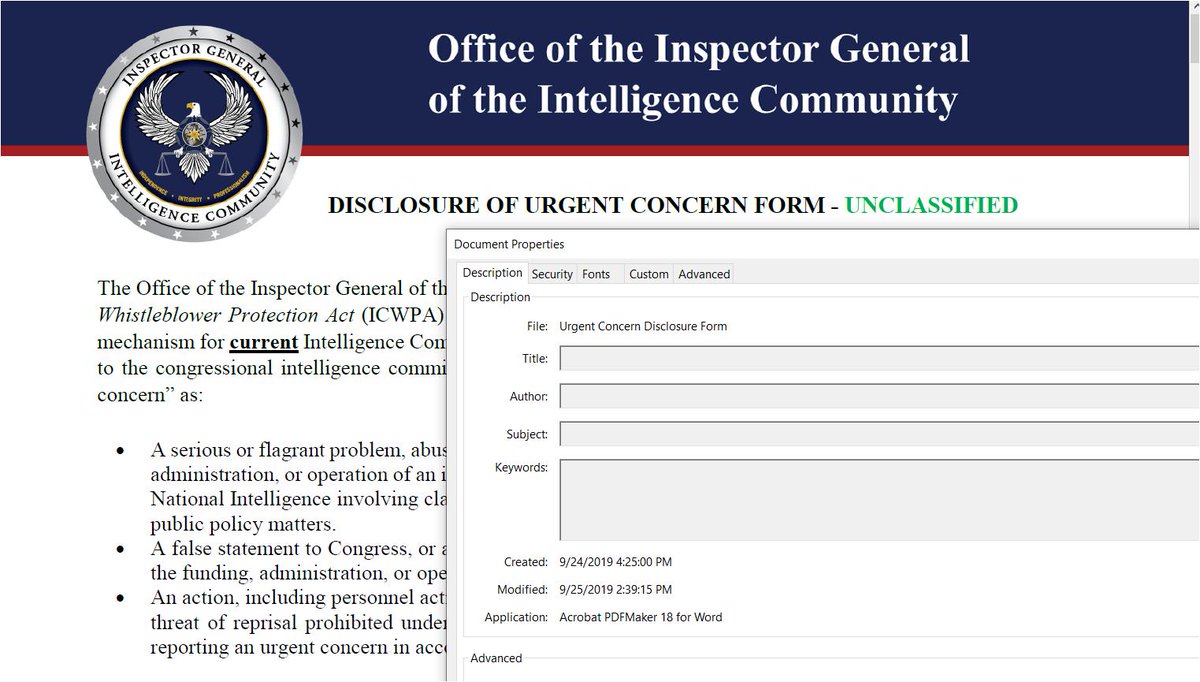 14/ Here is what prior ICIG whistleblower form looked like. Required reporting of an incident – not a long op ed quoting newspaper articles. No softball question about whether sources primary or secondary. pic.twitter.com/r5lqxK0Sga 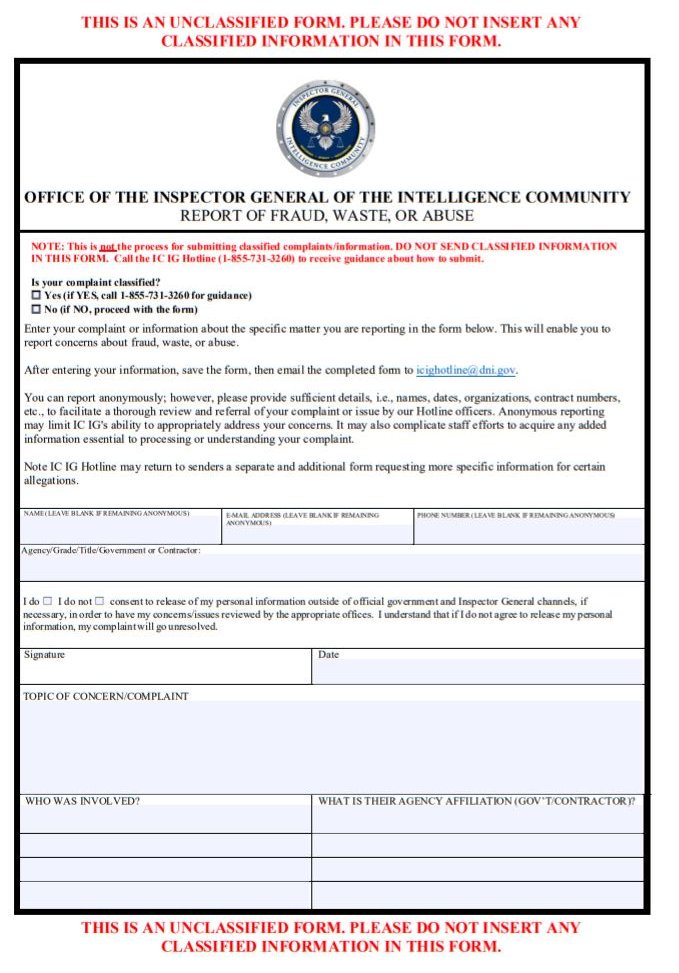 Hmmm, I wonder why anyone would do that… Remember Sue Gordon, the DS wanted her to fill the shoes of Coats, she  resigned  on Aug 8. The date on   “whistleblower” complaint is Aug 12

So why are all the DS players panicking because the truth is coming, and JS just supplied it, and RG will be adding to it.

Shouldn’t House Dems be calling someone named Biden, before me? I’m the messenger. Are you only a whistleblower if you allege, even falsely or incorrectly, misconduct about a Repub? What if it involves a Dem selling the VP’s office. See a problem? Where’s the Senate or FBI?

It seems the Senate is making a move, paul sperry tweeted out the following 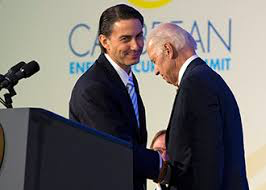 Then Trump finally says it,

We need to remember the DS is on the Defensive, and they need to stop Trump and the patriots and who scares them the most, AG Barr, they need to discredit him, destroy is reputation, and it has already begun

Remember whenever you here the DS players talk about coverup, rogue, they are talking about themselves, what they did, the are projecting everything they did the past onto Trump

Now there is reason why Trump mentioned Crowdstrike, HRC emails and the server in Ukraine, he wanted to get this information out to the public and he wanted the DS to know that they know where it all is and they have it all, Pain…

WHAT DEMOCRATS DON’T WANT YOU TO SEE: Overview of Crowdstrike – Firm that Claimed ‘Russia Hacked’ the US and the Ukraine – Is Now Under President Trump’s Radar

Recall that the DNC wouldn’t allow the FBI or any other U.S. government official anywhere near its computers. That’s precisely why so many cybersecurity experts doubted that it was the Russians: The FBI was never allowed to perform its own investigation.

The entire Russian insanity was launched by a couple of Ukrainians

Lets move onto to JE and the his missing partner Brunel

Now a few months back Trump wanted to add the question to the census that asked if you were a citizen, because he knew it would show  millions of people in this country that were not citizens. The census bureau data finds the following

Taliban worries loom as Afghanistan prepares to vote for a president