In my last column here at X22, I discussed why Fusion GPS’s Christopher Steele and Glenn Simpson would not be able to avoid being indicted by Special Counsel John Durham.

In this new column, I’m going to expand on yet another very good reason that Steele and Simpson will be criminally charged:

Now, it’s certainly not new information that somebody was passing Fusion GPS stuff that was being mined from the federal databases, and Steele ended up using some of that data in his dossier – especially for his memo about Michael Cohen being in Prague, Czechoslovakia to pay off the hackers who supposedly stole the DNC emails.  SpyGate researchers such as Jeff Carlson, Tracy Beanz and myself were writing about this over three years ago. 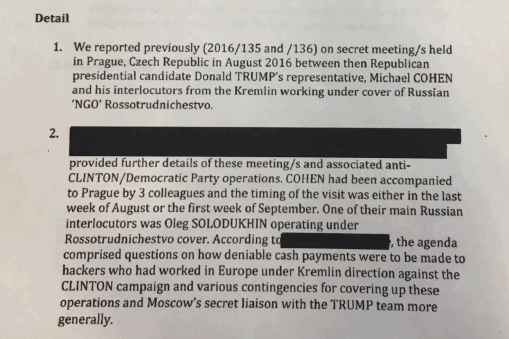 What is new is that Durham’s indictment of Perkins Coie lawyer Michael Sussmann pulled the curtain back at last and began revealing who the private federal contractors were.  It was Rodney Joffe at Neustar and several tech researchers at Georgia Technical University.

One of the chief reasons Durham and his staff wrote the Sussmann indictment like they did, essentially laying out the entire road map of a criminal conspiracy to invent Trump/Russia collusion hoaxes, was to reveal the use of federal contractors by the Clinton campaign’s private operatives at both Perkins Coie and Fusion GPS. Instead of just a one or two page simple statement of the offense, the document takes the reader on a journey where one of the main parts of the story is about how access to classified government databases was abused by private cybersecurity contractors for partisan political purposes.

This is how the trap swings shut on Christopher Steele and Glenn Simpson of Fusion GPS. Not only did Steele give federal officials 2 different stories about who his PSS was; it’s looking increasingly like Durham is going to be able to prove Steele & Simpson were knowingly taking illegally mined data being stolen by private government contractors and using some of it in the Steele dossier.

Like many longtime SpyGate researchers, I’ve been waiting for more than 3 years to find out who the private federal cybersecurity contractors were that fed Fusion illegally mined data. And now I know, thanks to the Sussmann indictment.

The indictment makes it clear the tech researchers were mining the federal databases they had access to for politically sensitive information they could pass on to Hillary Clinton’s private political operatives. All involved in mining this data would know the repercussions of getting caught doing this, as the criminal liability does not rest solely on the one who takes the data but it also extends to the one who receives it and makes use of it – should it be proven they knew it was stolen and where the data came from. And it would be very hard to believe that Steele and Simpson didn’t know where Joffe and the Georgia Tech researchers were getting this data from. So, at the present moment, it appears that Christopher Steele can be indicted for THREE different things:

2) criminal conspiracy to manufacture a fake hoax and give it to federal law enforcement, thereby wasting the fed’s time and resources chasing a hoax – which is exactly what happened in the Alfa Bank case

3) taking illegally obtained data from a federal database and using it as part of the hoax, as he did with the ‘wrong Michael Cohen in Prague’ entry in his dossier.

As to which of the 3 possible charges he’s indicted for first, we’ll have to wait and see what Durham does.

By the way, this likely explains why Steele was so vocal in his interview with ABC’s George Stephanopoulos about still firmly believing the Cohen-in-Prague story.  He knows at least one of Durham’s forthcoming indictments against him is going to mention the Cohen-in-Prague story, and do a deep dive into how Steele ended up with the data, who gave it to him, and where it came from.

Paul Sperry had an article at RCI in September in which he claimed the Alfa Bank data was far from the only data these criminals illegally took from data bases and handed off to their friends at Perkins Coie & Fusion. Sperry says there was a ‘digital dossier’ that been compiled on several key Trump-related targets:

To mine the data, the Clinton campaign enlisted a team of Beltway computer contractors as well as university researchers with security clearance who often collaborate with the FBI and the intelligence community. They worked from a five-page campaign document called the “Trump Associates List.” “

Surprisingly enough, Flynn, Manafort, Page and Cohen are the main Trump associates who happen to be targeted in the Steele Dossier.  I was kind of surprised that Sperry’s story didn’t get more attention at the time he published it on September 23rd.

Some SpyGate researchers such as myself have long suspected that the reason the ‘Michael Cohen in Prague’ section appears in Steele’s dossier is because Fusion was handed an electronic communications intercept from a federal database in which a Michael Cohen was indeed seen in Prague via cell phone data. And Steele working off that illegally transferred data intercept wrote a memo about it for his anti-Trump dossier in which he spun a fantasy about this being the Trump Organization lawyer.

It’s looking increasingly as if some of the dossier’s more speculative allegations can be traced to these private contractors that were feeding Perkins Coie and Fusion GPS – and by extension, the Clinton campaign – data that had been illegally mined from federal databases.

When asked who his sources were, Steele gave multiple stories to different federal officials.

Steele also couldn’t admit when questioned about his sources that the source for some of the dossier’s allegations were private contractors who were passing him illegally obtained information pulled from federal databases by using the names of specific Trump-related targets. Especially if he knew that data had been illegally obtained.

Because that would be a federal felony.

Note the language of the statute. It’s not just the person that takes the classified information illegally and gives it to another person that is in serious legal trouble:

Whoever **publishes** or **makes use of** that stolen information can also be legally liable. Like if they…let’s say for instance….take that stolen data about a ‘Michael Cohen in Prague’ and put it in a dossier that ends being handed off to FBI officials who then use parts of it in a spy warrant.  Or they take stolen data about computer pings from a Trump related server and put it in a white paper and thumb drives that pretend the Trump server was some kind of backchannel to the Russian government.

The Michael Cohen in Prague hoax story always stood out the moment Buzzfeed published the dossier because it was the very first allegation that was debunked beginning in January 2017.  But how many **other** allegations in Steele’s dossier will turn out to have been based on less obvious cases of Joffe and company feeding Fusion GPS illegally mined data about Cohen, Page, Flynn, Manafort and others?

We’ll have to wait and see.