Ep 2937a – Biden Just Exposed Himself, With No Cover Story The [CB] Makes Their Move
The green new deal is falling apart. The people are not going along with it. The people in Europe are hitting a point of no return. The US economy is imploding, US pending home sales are plunging and it almost down to the level of covid. Companies are laying off, Biden just went against the Union. The [CB] is now pushing the [CBDC] and they are trying to remove alternative currency at the same time. The [DS] is panicking, they have lost their weapon of narrative control. The [DS] will continue to hit EM and Trump. They don’t have a choice. The election fraud is being produced. Each time more evidence is produced the case is getting stronger and stronger. Bait and traps are being used by EM and Trump and the [DS] is doing exactly what they want.

Scoop @PuckNews: The long-anticipated CNN layoffs, expected to target hundreds of employees, are underway as of today…

DoorDash to lay off 1,250 employees as CEO says costs grew too fast

The trend here is clear: lower and to the right. According to the BLS.

The deputy public prosecutor of Nice, who visited the scene, said the fault of a third party could not be ruled out.

It was barely a month ago that The New York Times was worried that Ye's "white lives matter" stunt would corrupt the Balenciaga brand.

Now they claim concerns over Balenciaga's penchant for child exploitation in advertising is just a QAnon conspiracy. 🧵

The cause of the fires is under investigation but remains unknown as of press time.

Real America’s Voice News is your one stop news and entertainment network.

Several other major Democrat politicians attacked me too, all around the same time. It was coordinated.

Outside of party leadership and independents like Manchin, they are essentially actors on the political stage, not directors or script writers.

I hope Elon is ready for the massive moves being organized against him. He has more enemies than any person alive right now, and Twitter is an active threat to every corrupt power source on the planet.

ALERT: Anti-free speech EU autocrats threaten to ban @ElonMusk's @Twitter over refusal to abusively censor Americans and other users. Biden administration, which also supports censorship, is unlikely to act to defend American company and Americans against this foreign assault.

Elon is baiting the [DS] in

Australia RESCINDS over half of Covid-related fines administered during harsh lockdownshttps://t.co/j5ZV7cTSOa

V-Safe Part 2: Evidence that the CDC purposely did not include check-the-box selections for myocarditis, pericarditis, seizures, stroke, and other known potential serious harms in its premier Covid-19 vaccine safety reporting system – v-safe. https://t.co/YVi6lj5fX0

A Randomized Control Trial (RCT), the gold standard for scientific evidence in the medical community, was released on Tuesday in the Annals of Internal Medicine. The results from the RCT study deal a major blow to advocates of N95 and surgical masks as effective means to “stop Covid.”

As the study details, 1009 health care workers in four countries who provided direct care to patients with suspected or confirmed COVID-19 were given either N95 respirators or medical masks and tracked over the course of 9 weeks.

The most critical and surprising finding from the study is that N95 respirators did not significantly outperform “medical masks.” The results were based on PCR test for Covid-19 infection and testing for nucleocapsid antibodies (which reveals exposure to the SARS-CoV-2 virus).  In this chart of “cumulative hazard,” which is based on a Cox Proportional-Hazards model that displays calculated risk over time, the masks performed similarly. 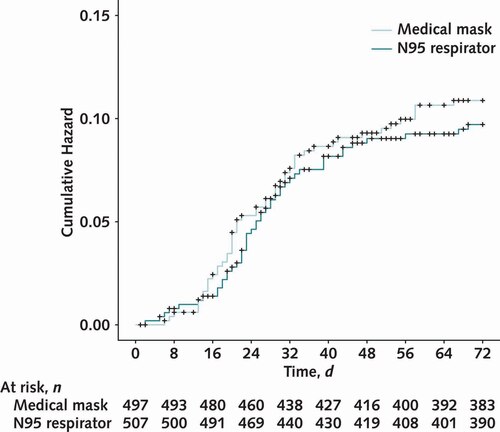 The second confounding issue is universal masking. Masks may plausibly impair the transmission of droplet-spread SARS-CoV-2 for a limited period of exposure time. But when the virus is aerosolized, masks are not designed to keep the virus from being exhaled through a mask or from penetrating a mask.

Thus, the “solution” of forcing everyone to wear N95 respirators becomes extremely problematic. N95 respirators are not designed to be worn for long hours each day by the general public. As can be seen from the supplement to the study, there were a number of Adverse Events reported for both medical mask and N95 respirator wearers.

This is why it’s absolutely imperative that House GOP investigate Jan 6. At least 5 FBI informants, including the VP of Oath Keepers, were embedded in the group months beforehand. Jury never heard this or witness testimony that some attempted to help police including Harry Dunn.

“We knew that the arrest of Mr. Yu would quickly become publicly known and it could raise suspicion about the security of the election. We also knew that some members of the public would worry that votes were stolen or miscounted — which has never been at issue — or have legitimate concerns about data privacy,” she said, adding that much of the information Gascón provided at the news conference came from “employees closest to this investigation.”

Problems with the election in Arizona have Republicans furious, and a majority of voters nationwide agree that the “sacred right to vote” is at risk. Seventy-one percent (71%) of Likely U.S. voters believe it’s likely – including 40% who say it’s Very Likely – that problems with the election in Maricopa County affected the outcome of the Senate election in Arizona. Twenty-three percent (23%) don’t think the problems affected the Senate election, in which Democratic Sen. Mark Kelly defeated GOP challenger Blake Masters by a 51%-47% margin. The gubernatorial race in Arizona was even closer, with Democrat Katie Hobbs edging Republican Kari Lake by a margin of less than 20,000 votes.

After reports of Election Day problems with vote tabulation in Maricopa County, Lake called the election “botched” and declared: “This isn’t about Republicans or Democrats. This is about our sacred right to vote, a right that many voters were, sadly, deprived of on November 8th.” Seventy-two percent (72%) of Likely Voters agree with Lake’s statement, including 45% who Strongly Agree. Eighteen percent (18%) disagree, including 13% who Strongly Disagree, while another 10% are not sure. Exactly. The obvious reality, as long-time users know, is that Twitter has failed in trust & safety for a very long time and has interfered in elections.

Twitter 2.0 will be far more effective, transparent and even-handed.

Our suspicions about Fuentes and Milo are now confirmed with their own words.

They wanted to sabotage Trump for their revenge tour and are leveraging Kanye to do it.