Boris Johnson is preparing to meet with France and Germany to discuss the BREXIT. The establishment will try to stop this, the fear meter is going to be off the chart as we get closer to Oct. NP and CS are rejecting the no-deal BREXIT. Trump is now calling on the Fed to cut rates and start stimulus. The [CB] [DS] are pushing the recession narrative. TC tweeted out that the NYT does not report real news anymore, Trump says NYT will be out of business. LG says when the truth comes out it is going to be horrific. The push is now on for voter id, JW is exposing voter fraud and bringing it out into the public eye. Trump tweeted that G manipulated the election for HRC. Future proves past, the push is on, the patriots are using distraction, 4d chess moves to prepare for the dump, time is everything.

Most likely this is how it is all going to play out.

♦U.S. Speaker Nancy Pelosi , Schumer no way can the brexit happen, we are already seeing this, Schumer came out against it.

♦The  media will also engage.   Twitter, Facebook, Instagram and similar media sites will begin pushing down (or eliminating) pro-Brexit content, and pushing up the anti-British pro-EU positions across all engagement.  Why is this going to happen to make it look like BREXIT has no support, the people are not supporting this

♦ As we get closer to October the fear meter will be off the charts.

Our Economy is very strong, despite the horrendous lack of vision by Jay Powell and the Fed, but the Democrats are trying to “will” the Economy to be bad for purposes of the 2020 Election. Very Selfish! Our dollar is so strong that it is sadly hurting other parts of the world…

…..The Fed Rate, over a fairly short period of time, should be reduced by at least 100 basis points, with perhaps some quantitative easing as well. If that happened, our Economy would be even better, and the World Economy would be greatly and quickly enhanced-good for everyone!

“The Fed Rate, over a fairly short period of time, should be reduced by at least 100 basis points, with perhaps some quantitative easing as well. If that happened, our Economy would be even better, and the World Economy would be greatly and quickly enhanced-good for everyone!”

Business owners and hard-working Americans tell us every day how great the economy is under President Trump.

But now the Left is openly wishing for a “recession!”

It’s the clearest example yet: Democrats are desperate to stop the President, even if it hurts America.

The MSM and DS are destroying themselves, as Q has always said

Never Interfere with an Enemy in the Process of Destroying Himself

These people are stupid.
Enjoy the show!
Q

The push is now on for voter id, exposing voting manipulation, who is responsible for it, we will discuss this a little later in this report. But first lets talk about the MSM, Ted Cruz tweeted out the following

If you care about journalism, or the First Amendt, READ the transcript. The Editor says (in effect) “for 2 yrs, we covered ‘Russia, Russia, Russia,’ facts be damned; now we’ll scream ‘racism, racism, racism’ for 18 mos, and the rest of the media follow us.” That’s not journalism. https://t.co/TPkpB0DjNj

The NYT is destroying itself w/ Trump hatred. And it’s ultimately bad for freedom of the press when “journalists” openly revel in being partisan propagandists. When our Nation is so tribalised that each side has their own “news” & “facts” and we don’t even talk to each other. https://t.co/pH2GIcEAYg

Trump chimed in and tweeted the following

The New York Times will be out of business soon after I leave office, hopefully in 6 years. They have Zero credibility and are losing a fortune, even now, especially after their massive unfunded liability. I’m fairly certain they’ll endorse me just to keep it all going!

Anthony Scaramucci is a highly unstable “nut job” who was with other candidates in the primary who got shellacked, & then unfortunately wheedled his way into my campaign. I barely knew him until his 11 days of gross incompetence-made a fool of himself, bad on TV. Abused staff,…

….got fired. Wrote a very nice book about me just recently. Now the book is a lie? Said his wife was driving him crazy, “something big” was happening with her. Getting divorced. He was a mental wreck. We didn’t want him around. Now Fake News puts him on like he was my buddy!

After Allegations Of Druggings And Rape, Epstein-Pal And His Modeling Agencies Come Into Focus

Brunel was one of the financier’s most frequent male associates. The agent appears more than 15 times on flight logs from Epstein’s private plane, jetting everywhere from Paris to New York, often in the presence of young women. He visited Epstein nearly 70 times in jail, according to visitor logs, and several more times while the financier was on house arrest in Palm Beach.

Virginia Roberts (now Giuffre)—one of the first alleged victims to speak out against Epstein after he was granted a sweetheart plea deal—claimed in legal filings that Brunel was one of many powerful men she was forced to sleep with in her years as Epstein’s “sex slave.” She also accused Brunel of using his agency to find foreign girls, obtain visas for them, and “farm them out to his friends, including Epstein.”    rg

Now we have been talking about Voter id  and the 2020 elections, now something very interesting is happening, tom fitton tweeted out

Follows LA County Move to Remove Up To 1.6 Million Inactives

Dirty voting rolls can mean dirty elections, so it is essential that dead/long-gone voters removed from voter rolls.https://t.co/1suGQJcfxt pic.twitter.com/pMpjt1GOlR

The anti-Trump media won’t tell you but I will, @RealDonaldTrump is on to something with his complaints about mass voter fraud. My guess is Hillary Clinton got about 1.1 million illegal votes from alien voters. DOJ should investigate alien illegal voting. https://t.co/BZUfDak6Ww pic.twitter.com/Gc3VyC4SNK

President Trump says we need voter ID. Just look at what @JudicialWatch Has discovered in California. They got over 1 million voters removed from the voter rolls. We know there was voter fraud there and the only way to fix it is voter ID. pic.twitter.com/EidftaJRVM

Take a listen to what trump said

Then trump comes out with the following

Trump: Google Should Be “Sued” For Manipulating Election In Favor Of Hillary

Wow, Report Just Out! Google manipulated from 2.6 million to 16 million votes for Hillary Clinton in 2016 Election! This was put out by a Clinton supporter, not a Trump Supporter! Google should be sued. My victory was even bigger than thought! @JudicialWatch

After an event this is when the DS/Dems push their legislation, remember they want their legislation passed, they do not want a discussion they don’t want to remove parts, Trump knew this and played along with all of it, and when the event fades from the headlines Trump moves away from the issue, optics are important. Now I believe that he was betting on congress do absolutely nothing, the house as their legislation, the senate was going to create theirs and they aren’t going to agree on anything, alaskan patriot tweeted out the following in regards to red flag law

When It Comes To Buying Greenland, Is The Third Time A Charm? Not Likely

So why did Trump bring this up, I believe is was a distraction to keep the MSM buzzing about nothing, while the real work continues behind the scenes. A political fundraiser for @SenatorSandoval simulates an assassination attempt against a mock @realDonaldTrump decked out in Mexican garb. Looks like a man pointed a fake assault weapon at the fake President to pose for a picture. pic.twitter.com/MlT9zjB1mn 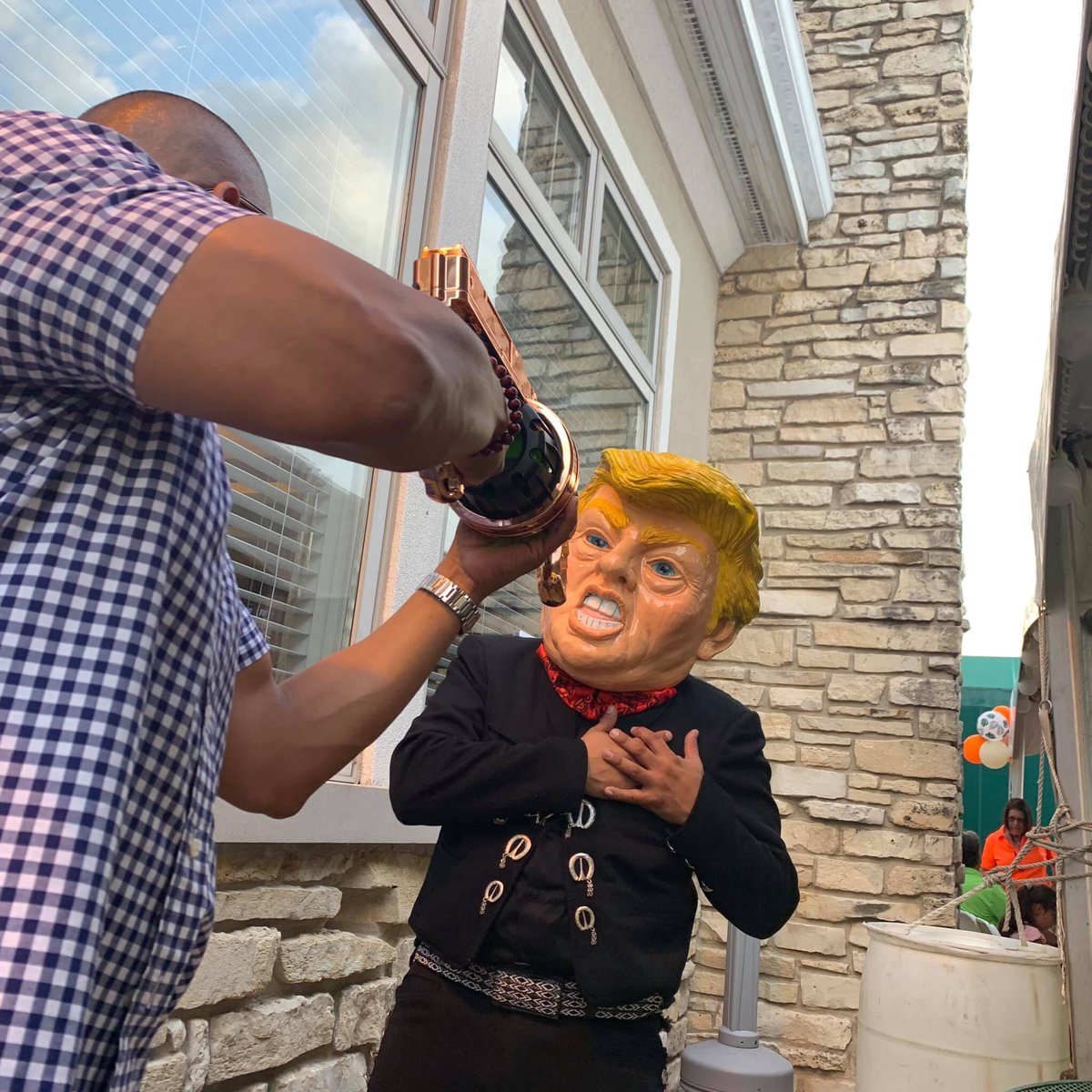 Every Democrat should be asked if they support or disavow this. https://t.co/7nRXtzIXqz