Ep 2972b – How About A Nice Game Of Chess? Check, Checkmate, Time To Show The World The Truth The WEF is panicking, each year they hold a meeting they have soldiers with guns to protect the criminals who attend. Why would they need something like this? The GND is failing, the gas stove ban is failing and the earth is cooling. The debt ceiling is approaching, let’s see what happens. The [DS] is now scrambling, they know its just a matter of time before the information comes out about Biden, he is now a liability, they have started the process of removing him. Trump knew the entire time. It is time to tell the world the truth. This is one gigantic chess match, the [DS] has lost and their are only a couple of move left, checkmate. Sometimes the people need to see it to believe it. The criminals are being exposed.

Not one media outlet has reported it.

The last 8 years have witnessed global COOLING despite 450 billion tons of emissions worth 14% of total manmade atmospheric CO2.

CO2 warming is a hoax.

But the media can't/won't walk back CO2 hysteria. pic.twitter.com/tGHLnfLQJh

‘Gas Stove-ing’ America: After Failing to Sell a Crisis, the Media Blames Conservatives and Hilariously Burn Themselves

Even the Environmental Protection Agency says “gas stoves (and gas fireplace inserts) do not require EPA certification. Whether designed to burn natural gas or propane, they burn very cleanly, emitting very little pollution.” It adds that “many cooking appliances and the process of cooking itself can increase levels of indoor PM [particulate matter].”

Yellen says US is projected to hit debt ceiling on Jan. 19

The Gray Lady’s Hunter whitewash: How the New York Times sugarcoated the Bidens’ dodgy business deals, shared bank accounts and whistleblowers in its 5,300-word ‘investigation’ into the troubled First Son

2.Staff of House Democrat @AdamSchiff wrote to Twitter quite often, asking that tweets be taken down. This important use of taxpayer resources involved an ask about a “Peter Douche” parody photo of Joe Biden. The DNC made the same request: https://t.co/fM2Y2jxVKw pic.twitter.com/LIQMbns1B0

4.Schiff staffer Jeff Lowenstein didn’t give up, claiming there was a “slippery slope concern here.” pic.twitter.com/qM1cJiZLFh

6.Even when Twitter didn’t suspend an account, that didn’t mean they didn’t act. Schiff’s office repeatedly complained about “QAnon related activity” that were often tweets about other matters, like the identity of the Ukraine “whistleblower” or the Steele dossier: pic.twitter.com/XKzY8AmB5R

8.Schiff’s office had a concern about “deamplification,” though: it might make it harder for law enforcement to track the offending Tweeters.

Twitter had no editorial input. Searches were carried out by third parties, so the documents could be limited.

A consistent theme of the #TwitterFiles has been concrete evidence that Russiagate headlines were manufactured by politicians and media — the thread below blows up the absurd #ReleaseTheMemo panic stoked by @SenFeinstein, @SenBlumenthal, and @AdamSchiff, among others. https://t.co/uO92WXyBlW

Why would a congressional leader sworn to protect the Constitution and First Amendment want to muzzle a veteran journalist?

Pfizer just donated $1 million dollars to Mitch McConnell & the Kentucky GOP. Are you awake yet?

EXCLUSIVE: Senator Questions CDC on Why It Expected Hundreds of Safety Signals for COVID-19 Vaccines

#1 The CEO of the OneAmerica insurance company publicly disclosed that during the 3rd and 4th quarters of 2021, death in people of working age (18–64) was 40% higher than it was before the pandemic.

Significantly, the majority of the deaths were not attributed to COVID. pic.twitter.com/HMJn9qSeAd

#4 This increase in the death rate of working-age people also appears in the CDC's Mortality database.@DowdEdward: "From Feb. 2021 to Mar. 2022, millennials experienced the equivalent of a Vietnam war, with more than 60,000 excess deaths."https://t.co/uHMyiZuUrH pic.twitter.com/GRqTz28V2z

Their Covid-19 trial also shows an *INCREASED* risk of illness & death in the vaccinated group compared to the placebo.https://t.co/FYpwlNPhC0

REPORT: Rep. Chip Roy (R-TX) introduced a bill Thursday morning that would put a stop to federal funding of the World Health Organization, with the congressman citing the WHO's promotion of abortion and gender ideology, as well as praise of China during the COVID-19 pandemic.

In terms of chain-of-custody and national security damage assessment, #Caralago is a much more egregious potential espionage scandal than Mar-a-Lago because Biden's classified stash was found at multiple locations and had been moved several times

I wonder how many more docs they are going to find,

Kash Patel on Biden classified docs: ‘These documents have been on the move for seven years’

Former Department of Defense chief of staff Kash Patel weighs in on the discovery of classified documents tied to Joe Biden in three different locations on ‘Kudlow.’

The timeline as described by AG Merrick Garland: 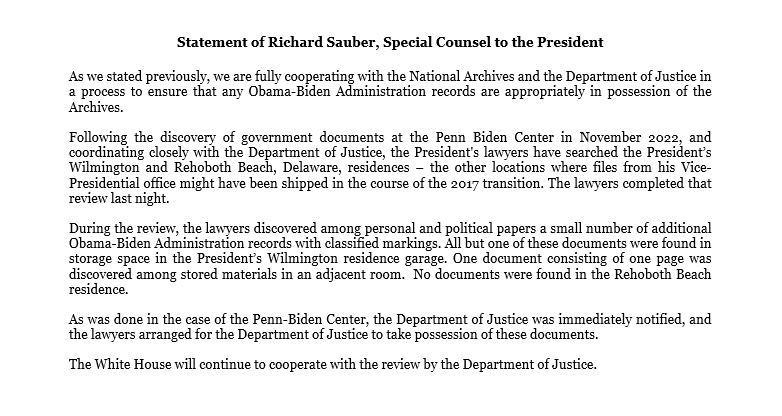