Skip to content
Reports
November 9, 2020November 12, 2020 x22report
SPREAD THE WORD
94,274
The [DS] and the [CB] are now making their move to take back the system. [JB] has already made the announcement that he will reverse Trump’s policies, including trade deals, regulations and the [CB]. The [CB] is now trying to regain control of their system. Countermeasures in place. The [DS]/MSM are pushing as hard as they can to convince the people that [JB] has won the election. This push has just failed. The MSM does not make the decision the GSA does, and they have to look at the election results. The MSM is now panicking, their flashy propaganda is now falling apart and they are trying to counter everything that is coming out. Trump is ready to use the constitution against them, the counterpunch is coming.

CPTPP stands for the Comprehensive and Progressive Agreement for Trans-Pacific Partnership. It

I truly sympathize with those dealing with losing — it’s not easy — but at a certain point one has to think not only about what’s best for the nation (peaceful transfer of power) but how any future employers might see your character defined during adversity.

Sources close to POTUS tell me he’s being urged by Jared Kushner, Rudy Giuliani, & campaign adviser Jason Miller to hold rallies throughout the US pushing for recounts of votes.

Dave Bossie and WH chief of staff Mark Meadows are urging the president to think about a concession.

This is 100% false. There is no truth to this report whatsoever. CoS Meadows, Dave Bossie, Jared Kushner, Rudy, myself and everybody else are on the same page – we all work for @realDonaldTrump and follow his lead, and there is no daylight between us. https://t.co/GAHjAs5yck

Now the Social Media companies and the MSM are trying to explain away why the ballots weren’t completely filled out. They are in trouble.

Twitter has no idea how laughable this is pic.twitter.com/Oz086WTcXt

BREAKING: The Democratic Party of Georgia has been pressuring election officials across the state to count rejected provisional ballots for Biden, contending thousands have “curable defects”

🚨🚨 Detroit elections worker: “I was instructed by my supervisor to adjust the mailing date of these absentee ballot packages to be dated earlier than they were actually sent. The supervisor was making announcements for all workers to engage in this practice.” 🚨🚨

“I was specifically instructed by my supervisor not to ask for a driver’s license or any photo I.D. when a person was trying to vote.” pic.twitter.com/jPz2jdWoPD

Officials tell voters to verify their selections on a paper ballot before feeding it into an optical scanner. But the scanner doesn’t record the text that voters see; rather, it reads an unencrypted quick response, or QR, barcode that is indecipherable to the human eye. Either by tampering with individual voting machines or by infiltrating the state’s central elections server, hackers could systematically alter the barcodes to change votes.

Such a manipulation could not be detected without an audit after the election.

The software is doing exactly what it is programmed to do. pic.twitter.com/RcKTWogHSD

Here is Bill Binney explaining that this is not a glitch, TAKE A LISTEN

The Constitution Offers Ways Out of the Election Mess

Never forget the role that activist judges played in paving the way for this chaotic election!

GORSUCH: “Nothing in our founding document contemplates the kind of judicial intervention that took place here, nor is there precedent for it in 230 years of this Court’s decisions” ⬇️ pic.twitter.com/65UlbPIWmE 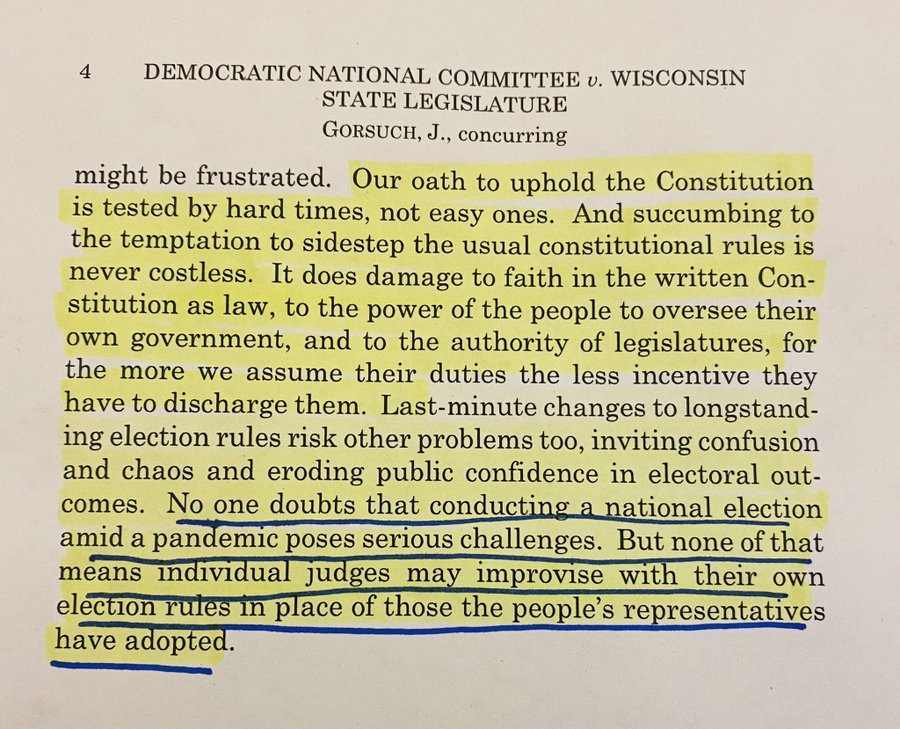 Nevada is turning out to be a cesspool of Fake Votes. @mschlapp & @AdamLaxalt are finding things that, when released, will be absolutely shocking!

Pennsylvania prevented us from watching much of the Ballot count. Unthinkable and illegal in this country.

Bill Barr enters the scene,  Leaving the Capitol after a meeting with Senator Mcconel

A presidential election closely monitored for cyberattacks — but surprisingly free of them — reached an apparent conclusion on Saturday morning when Joe Biden secured the necessary electoral votes to win the White House https://t.co/kOpA1rZR5s

The entire MSM push has just been destroyed

Top USAID Official Tells Agency Leadership: ‘There Is No Transition In Place’

I am pleased to announce that Christopher C. Miller, the highly respected Director of the National Counterterrorism Center (unanimously confirmed by the Senate), will be Acting Secretary of Defense, effective immediately..

…Chris will do a GREAT job! Mark Esper has been terminated. I would like to thank him for his service.

1. To have a successful coup, a leader must control the military.
2. Trump just fired DOD Secretary and installed a flunky.
3. This is serious.
4. Will Republicans speak up, or will they remain complicit?

Trump made sure everyone knew that he fired him and he didn’t resign.

A dozen journalists from big box media outlets just asked me the same question at the same time. Surely some kind of coordinated, and/or orchestrated, effort is in the works.

I imagine the articles will release in a tandem flourish to distract from whatever bad news they might be predicting internally.

The question is did Pfizer hold this back, yes they were part of operation warpspeed, but did they hold it back a released after the election to help Biden with the pandemic, this will backfire, it will end up helping Trump .

“Please, I implore you, wear a mask,” President-elect Joe Biden said as he addressed Americans on Monday. “Do it for yourself. Do it for your neighbor.” https://t.co/voHVulwvdj pic.twitter.com/TeuipQNWSr

Remember when Biden told Trump it was going to be a dark winter. Why does he want everyone to mask up, he just sent a message, riots are coming.

“It is to give something back to all of us, a normal life. The goal is to get back to normal as fast as possible, and masks are critical doing that. It won’t be forever, but that’s how we get our nation back up to speed economically.”

NYC,DC,Philly were all boarded up for riots.

All of a sudden no riots by Trump supporters.

What happens if recounts and challenges make @realDonaldTrump the winner.

The Biden supporters do riot because they are lawless.

I became friends with President Trump in 2011, nearly 10 years ago. He said something to me then I never forgot. He said “I’m a counterpuncher”. We’re about to see that in full effect! IT AINT OVER!!!!!