Trump and the patriots have complete control of the economy and the fed. The [CB]/[DS] cannot allow this, they will fight until the bitter end to get control back. The Fed has been detached from the other [CB]s. The economy continues to improves, people are beginning to spend for the holidays as covid magically disappears. The [DS]/MSM have pushed their agenda into overdrive, all assets are deployed, they will not give in. The push is to use propaganda to convince the country and the world that [JB] won the election and there is no voter fraud, that is a myth. The elections have been an illusion, it was created by the [DS] using special algorithms to make the people believe they had the power to choose. Trump is waiting for the right moment, this is truly the art of war, keep your plan in the dark, when you move fall like a thunderbolt and drop the hammer.

Your kids had to go to school on their computers for a year and your grandfather had to die alone and your neighborhood bar had to go bankrupt because of covid but this is perfectly okay pic.twitter.com/sVVAniymdf

An entire college stadium just stormed the field at Notre Dame and no one cares because Election Day has passed and the COVID panic was all a total farce.

The [DS] players are feeling that they are in control, they are parading around like they won the election, this is exactly where Trump wants them

The [DS]/MSM are using everything they have, it is all propaganda.

The citizens of the United States, not media outlets, determine the outcome of elections. With recounts and legal challenges expected, we must let the process play out. Count every legal vote.

All Pennsylvania ballots received after 8pm on November 3 must be:

(1) segregated and kept separate from other ballots; and
(2) counted separately from timely ballots.

Those numbers should be revealing… pic.twitter.com/JiKoWeMdiN 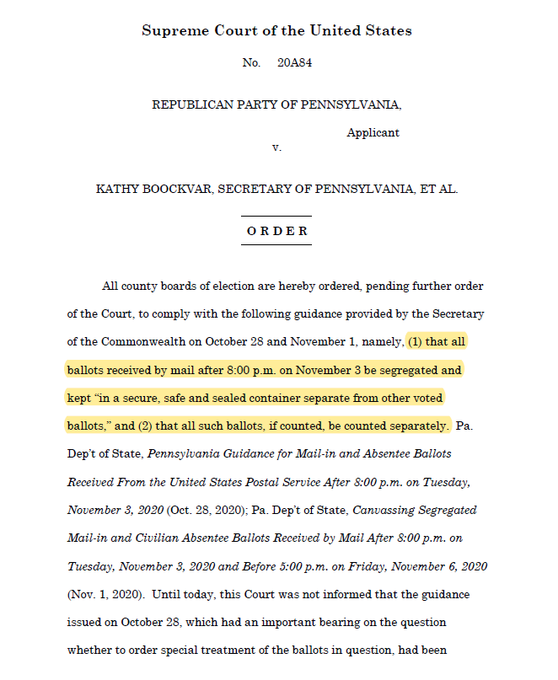 Why does this matter?

It has been argued that the PA Supreme Court improperly extended the PA election deadline – in contravention of the US Constitution. pic.twitter.com/IuznFCT04O 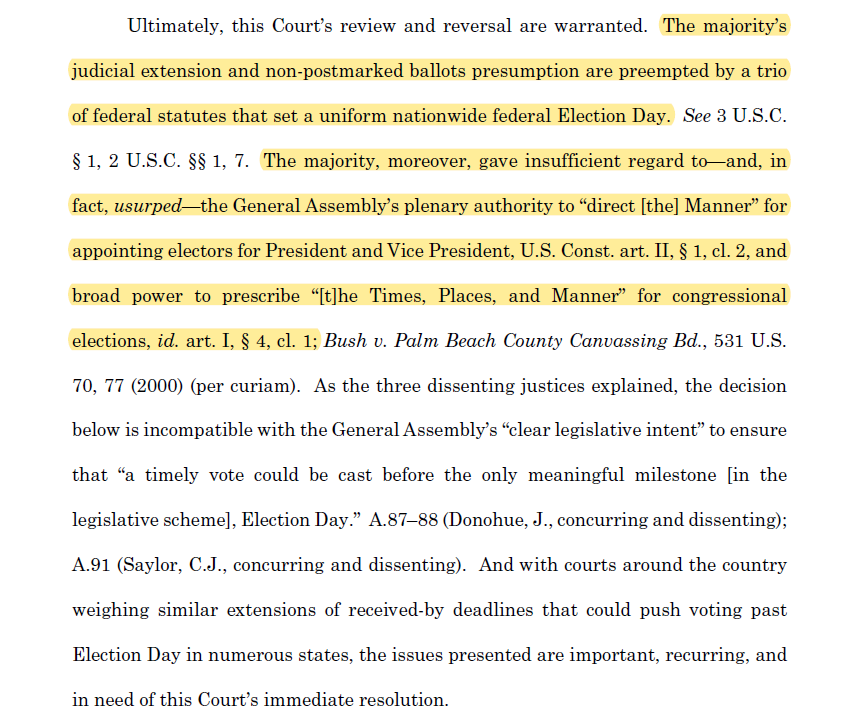 “We should look at the votes. We’re just beginning the tabulation stage. We should look at these allegations. We’re seeing a number of affidavits that there has been voter fraud. We have a history in this country of election problems. In Pennsylvania you had an order by a…

….Supreme Court Justice to compel them to separate ballots that were received after the legislative deadline. It required the intervention of Justice Alito. That’s a large group of ballots. When you talk about systemic problems, it’s about…

….how these ballots were authenticated, because if there’s a problem in the system about authentication, that would seriously affect the ENTIRE ELECTION – And what concerns me is that we had over a hundred million mail-in ballot in cites like Philladelphia…

…and Detroit with a long series of election problems (to put it mildly).” @JonathanTurley

We’ve moved from the Russia-stole-election phase to the don’t-question-election-integrity phase.

Democrats have spent the last four years telling Americans that it’s possible to rig an election.

So they shouldn’t be surprised that Americans now demand we #AuditTheVote.

The MSM, [DS], the corrupt politicians, hollywood actors and actresses are now pushing the proganda that Biden is the president elect, Krisi Noem reminds everyone of something very important .

We the People choose our government by consent of the governed. We need to ensure that our elections are fair, honest, and transparent.

Al Gore got his day in court. President Trump and the 70 million Americans who voted for him should be afforded the same opportunity. pic.twitter.com/ww1KJHJQ2H

The media does not tell us who the president is, they can’t call it.

Since when does the Lamestream Media call who our next president will be? We have all learned a lot in the last two weeks!

CJTRUTH tweeted this out, Remember

Al gore thought he was President for  ~ 37 days. Have you ever heard of President Al Gore? Yeah me neither.

There is a legitimate legal battle ensuing across America. Get involved where you can, pray all you can & know the MEDIA is NOT responsible for deciding our elections. We The People are by our great constitution. Let it lead us to a legitimate outcome and not the MainStreamMedia! https://t.co/b6hXE5vQYs

Watch closely everyone. Look at who is defending the President, and look at who is looking to “turn the chapter” Don’t forget this moment.

Congratulations @JoeBiden and @KamalaHarris. Joe, we’ve had a long & warm personal relationship for nearly 40 years, and I know you as a great friend of Israel. I look forward to working with both of you to further strengthen the special alliance between the U.S. and Israel.

Some 98,000 Pennsylvanians apparently “voted” for Biden but *no one else down the ballot*.

You tell us: are these real votes or fraudulent ballots desperately manufactured in the middle of the night to put Biden over the top?

WOW! They Want You to Believe This! — Biden Gained Over 1 Million Votes in Pennsylvania SINCE THE MORNING AFTER THE ELECTION!

The [DS] planned this from the beginning

As the banking industry replaced manual bookkeeping with computerized systems as a means of keeping track of customer accounts, they unknowingly opened the door to a type of embezzlement that had previously been difficult (if not impossible) to successfully pull off on a large scale: the ‘salami’ technique. This was a scheme by which a bank employee (usually a computer programmer) could surreptitiously stockpile a substantial amount of money not by grabbing large sums all at once, but by ‘slicing’ off ‘thin’ amounts of cash from many different customers’ accounts and diverting them to one central account (which he controlled), thereby building up a tidy nest egg while minimizing the risk that any single instance of his theft would be detected and investigated.

Is it a Computer glitch?

No. Controlling the results by percent required the use of decimals. pic.twitter.com/HdtNzmOFpP

Dominion Voting Systems — which commands more than a third of the voting-machine market without having Washington lobbyists — has hired its first, a high-powered firm that includes a longtime aide to Speaker Nancy Pelosi.

President Trump finishes up his round of golf—which in the middle of, Joe Biden was declared the winner of #Election2020. pic.twitter.com/UEaqFgZmZl

After finishing the round, he stopped to take photos with a bride getting married at the club today. pic.twitter.com/0YQGHnVBIE

Is anyone else getting the sense that our entire election system and “democracy” has been an illusion for decades?

If you’ve ever wondered what Psychological Operations look like, this is it

The media knowingly pushed fake polls. The media saw the evidence of fraud. Despite that, they declared Biden the winner. If Trump is eventually named the real winner, how do Biden fans react? When the next wave of violence breaks out, you’ll know who was responsible.

“Let your plans be dark and impenetrable as night, and when you move, fall like a thunderbolt.”

24 thoughts on “Let Your Plans Be Dark As Night,When You Move,Fall Like A Thunderbolt, Drop The Hammer- Ep. 2323”