The [CB]s have played their card, they are trying to destroy small businesses, Gov and Mayors are taking orders from them and they are continuing the lockdowns. Now those same states are hurting and the people see who is responsible. The [CB] great reset plan has failed, what will they try next. The [DS]/MSM have played their hand, they cheated and manipulated the election to get [JB] into office. Now we see stories about China, [NP][ES][HB] and [JB] leaked out. We see Gov and mayors with the Chinese, it is all being exposed to the American people. Time has just placed [JB] & [KH] on the cover, marker revealed. Trump just signed an EO for Dec 24, it has begun. 😋 Get The Only Keto Alternative I Use Here: 🍃
➡️ http://ketowithx22.com
Get 51% OFF By Clicking The Link Above ^^^
✅ Enjoy The Healthy Aging Support of Collagen 🔥

Not everybody gets to shake the hand of the Chinese Chairman Xi Jinping.

Iowa’s governor Kim Reynolds has though.

Has Andy Beshear taken CCP money?
We now know Eric Swalwell may have been compromised by CCP sexpionage..

NEWS: Wisconsin Judge denies Trump campaign appeal of the recount in Milwaukee and Dane counties and affirms the state’s certification of the election. The Trump campaign had challenged 220K ballots.

I listened to the Wisc case today & The attorney for Biden admits executive branch officials “modified” (i.e., re-wrote the statute by executive fiat) the law pertaining to a voter’s status as “indefinitely confined.”

And not only that, what Biden’s attorney just admitted to in court on the record, according to this, would nullify those votes. pic.twitter.com/TiLKK0F64E

(THREAD) The amicus brief that was signed by over 100 House Republican Members today is about protecting our Constitution. The Constitution is clear; Election Officials and State Executives cannot change the people’s presidential election process without the state legislature …

approving it. Additionally, it is unconstitutional to refuse to check signatures on mail-in ballots if the state law explicitly states that they must be checked. We are requesting that the Supreme Court carefully review the lawsuit and provide clarity …

to the American People, who are rightfully concerned about both the unconstitutional overreach from certain state officials and the integrity of the Presidential election. (End)

Texas has filed its reply brief in the election challenge, which means that briefing is complete. The court could act at any time.https://t.co/W9rltCfGEK

The Constitution matters! For those who are looking for a path to correct the irregularities and assaults on the integrity of the 2020 Presidential election, here is a prescription.@TomFitton @newtgingrich @marklevinshow pic.twitter.com/qKDwgtr8X6 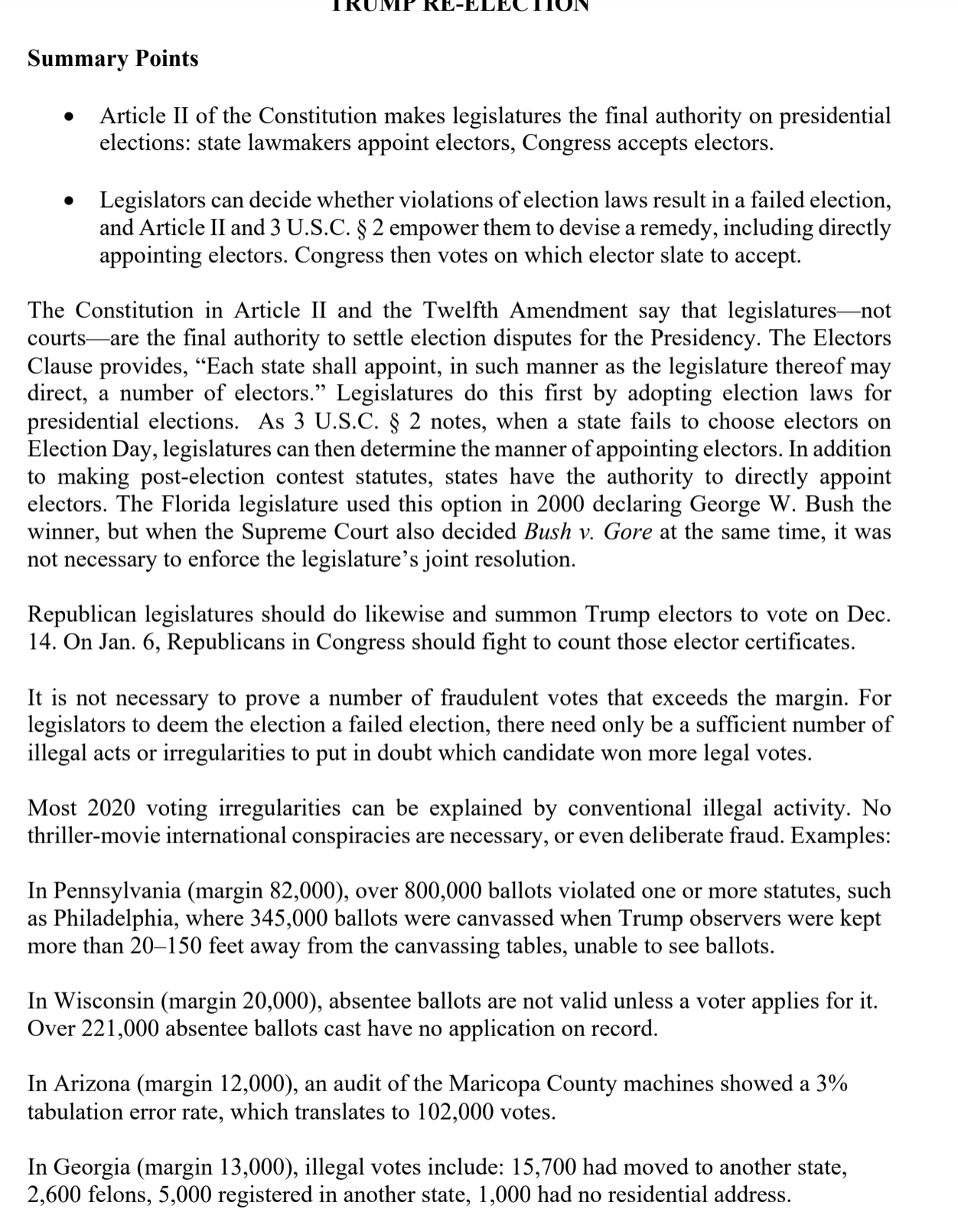 Sorry, to all MI, WI, GA, and PA state legislators filing amici briefs, all I have to say is “man up.”Call for vote or call special session, asserting authority under Elector’s Clause and then vote, naming electors, whether Biden, Trump, or neither. Don’t expect S.Ct. to save U.

Tremendous support from all over the Country. All we ask is COURAGE & WISDOM from those that will be making one of the most important decisions in our Country’s history. God bless you!

What did Pelosi know about Swalwell’s relationship with the Chinese spy?

When did she find out?

I suspect, based on

‘s comments, Pelosi herself may have been a target.

New York City had the strictest lockdown measures & mask mandates in the country. But if those actually worked—why would Andrew Cuomo need to ban outdoor dining?

Today’s reminder that in Italy – the big developed country worst-hit by the ro – the odds of a healthy person under 40 dying from #Covid this year are 0.00006%.

If you’re looking for a source, it’s section 10 of this report. 163 Italians under 40 have died of #Covid. Of those, 15 are known to have “no major pathologies” (psychiatric illnesses, kidney problems, etc).

Italy has about 24 million people under 40.https://t.co/pDkVoKwb4X

They changed requirements for the coronavirus which allows for post-mortem testing, meaning—if you get hit by a car & die, they are allowed to test your body for covid-19 & count you toward its “death toll”. Madness & manipulation. 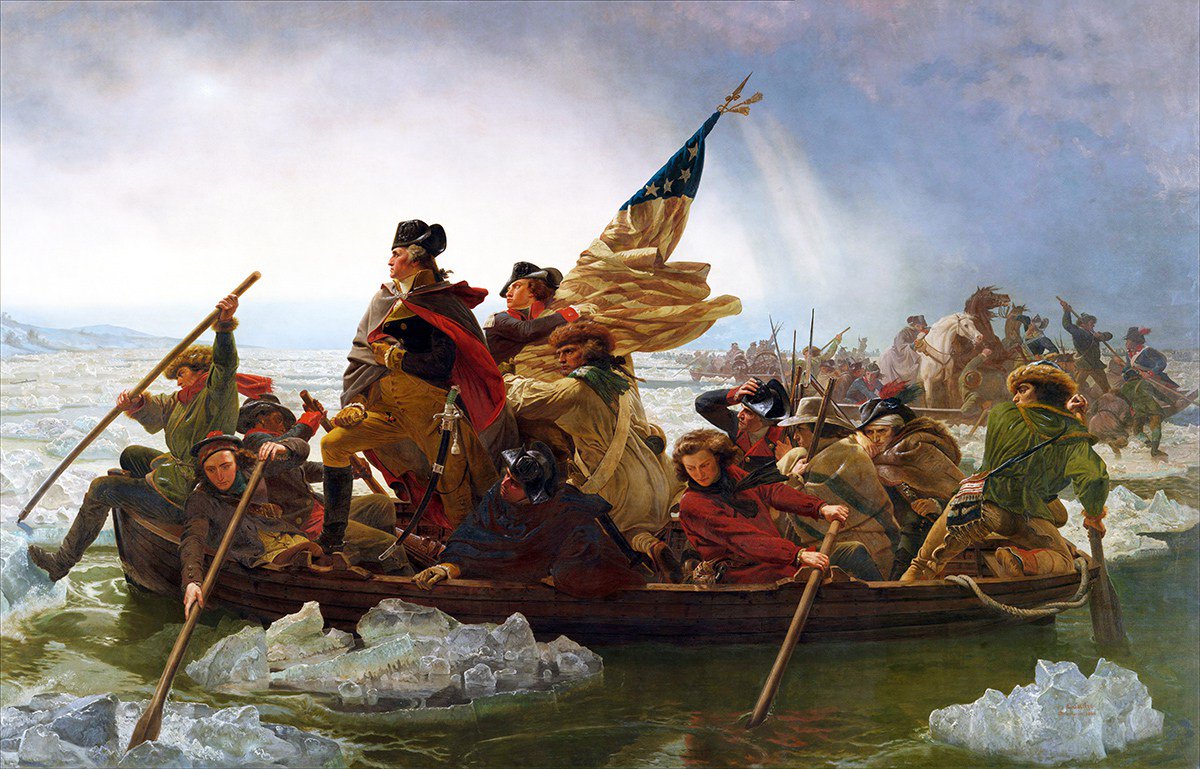 George Washington’s crossing of the Delaware River, which occurred on the night of December 25–26, 1776, during the American Revolutionary War, was the first move in a surprise attack organized by George Washington against Hessian forces (German auxiliaries in the service of the British) in Trenton, New Jersey, on the morning of December 26. Planned in partial secrecy, Washington led a column of Continental Army troops across the icy Delaware River in a logistically challenging and dangerous operation.