Ep 2934b – Official Secrets Ready To Be Revealed, [DS] Moves To Blackout The Information

Ep 2934a – The Economic Pain Is Hitting The People, Trump Ready To Step In
The [WEF] are losing its grip, the people are seeing the truth about the green new deal and the brainwashing of the young is about to come to an end. The EU is going to go through a rough winter. Trump is asking if the people miss him yet as the economy fails. The [DS] are now reacting to everything, they are panicking over Twitter. They have lost control of the blocking system and the EM is about to reveal the truth. The people that were banned are now about to come back online. The [DS] in the end will only have one choice, a communication blackout because official secrets are about to be revealed. The [DS] never thought that the secrets would see the light of day. Trump is  pushing freedom.

REVEALED: Biden ordered Trudeau to END freedom convoy over fears US car plants would close within hours – before the Canadian PM invoked emergency powers to quash it

The Need for New California

The current state of California has become governed by a tyranny, which rivals those expressed in the above documents. Therefore the United States Declaration of Independence of 1776, the Constitution as adapted in 1783 by the Congress of the United States of America, the Alta California Declaration of Independence of 1836, the Sonoma Proclamation of 1846, and the California State Constitution of 1848 Mandate the Right, the Responsibility, the Duty of the People who are suffering the long train of abuses and usurpations at the hands of a tyrannical government to abolish and make new a government by the People and for the People under GOD.

“New States may be admitted by the Congress into this Union; but no new States shall be formed or erected within the Jurisdiction of any other State; nor any State be formed by the Junction of two or more States, or parts of States, without the Consent of the Legislatures of the States concerned as well as of the Congress.”

“Whenever any Form of Government becomes destructive of these ends, it is the Right of the People to alter or to abolish it, and to institute new Government, laying its foundation on such Principles and organizing its Powers in such form, as to them shall seem most likely to effect their Safety and Happiness”.

The Precedence was set in 1861 when West Virginia was split from Confederate Virginia as Virginia tried to secede the Union.  The process begins when a state’s legislature first votes to split the state. Once the measure in the form of a resolution passes both the State Assembly and Senate it is submitted to Congress.  Both the U.S. House of Representatives and the U.S. Senate must vote to pass the resolution in order to split the state.

​No State has been brought into the Union who could not demonstrate their ability to self govern.  New California will demonstrate a governance system as modeled by the U.S. Declaration of Independence, Constitution and Bill of Rights…

​…​New California will be the 6th largest State behind New York (bigger than Illinois and Penn),    It’s Estimated 25-27 seats in the US House of Representatives will go to New California.   Old California will become the 2nd most populous state behind Texas and ahead of Florida, losing 25-27 seats in the  US House of Representatives   The 5 Southern New California counties have a population of just over 11million If they were to break away they would be a state the size of Ohio, probably larger as some other counties might join.

The people have spoken. 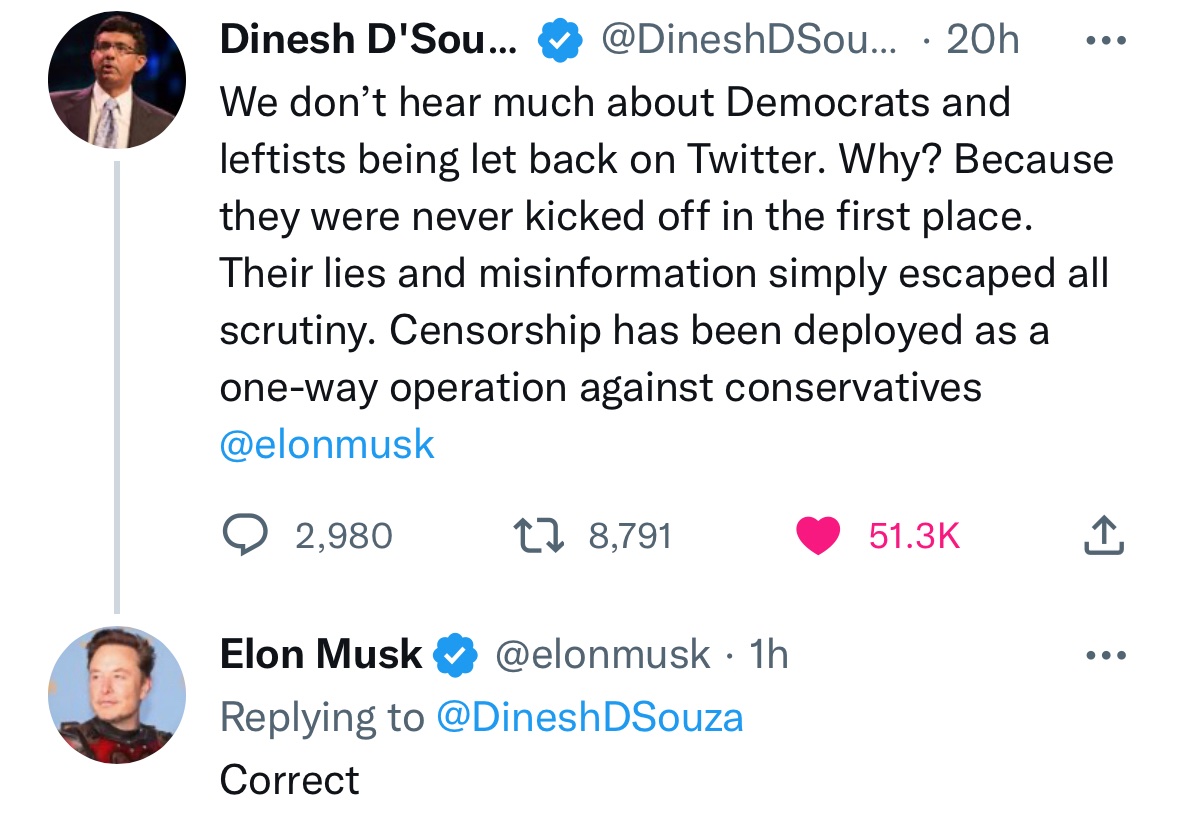 It has been really bad. Far left San Francisco/Berkeley views have been propagated to the world via Twitter.

I’m sure this comes as no surprise to anyone watching closely.

Twitter is moving rapidly to establish an even playing field. No more thumb on the scale!

I am neither conventionally right nor left, but I agree with your point.

The woke mind virus has thoroughly penetrated entertainment and is pushing civilization towards suicide.

There needs to be a counter-narrative.

I have half a mind to wag my finger at the 1500 accounts that caused the spike, but I shall forebear 🙄

Removing child exploitation is priority #1. Please reply in comments if you see anything that Twitter needs to address.

After turning a blind eye to pedophilia & the sexualization of our children as well as forcing vaccinations upon people against their will & with severe consequences etc the West has really ceded the moral high ground to bitch about Qatar enforcing their beliefs at the World Cup.

The more I learn, the worse it gets. The world should know the truth of what has been happening at Twitter.

Transparency will earn the trust of the people.

It's possible the perp had ideological motives. It's possible he's "nonbinary" as his lawyers claim. But the journos didn't wait for the facts: they tried to immediately shift the blame to their political enemies. And the public is catching on to their game.

Dr. Fauci’s 7-Hour Deposition Blacked Out by Media — Here is the Most Damning Revelation That Came Out

2/ The CCP had announced China had contained the virus through draconian lockdowns–a claim now known to be false. Given the China's pattern of falsified information, Lane and Fauci should have approached this claim with skepticism. Lockdowns were wholly untested & unprecedented.

4/ Days after Lane returned, WHO published its report praising China’s strategy: “China’s uncompromising and rigorous use of non-pharmaceutical measures [lockdowns] to contain transmission of the COVID-19 virus in multiple settings provides vital lessons for the global response.

6/ Lockdowns quickly spread from China to the West, as a troubling number of Western apologists besides the WHO also looked to the Chinese Communist Party’s covid response for guidance.

8/8 From the very beginning, the evidential basis for this global policy catastrophe was always paper-thin.

We are now living in the aftermath.

“Wow!” Landry said. “It was amazing to spend 7 hours with Dr. Fauci. The man who single-handedly wrecked the U.S. economy based upon “the science.” Only to discover that he can’t recall practically anything dealing with his Covid response!”

The man in charge of Maricopa Co's disastrous elections is Stephen Richer.

He ran an anti-Kari Lake PAC.

AZ Sun Times: ALL expenditures from Richer's PAC were spent telling Arizonans NOT to vote for Lake.