The stock market has been all over the place, the [CB] continually tries to push it down to crash but it is not working. The patriots are in full control. The distribution of supplies is being hammered by the latest event. Trump has now removed the interest payments from student loans. Trump is now pointing out the Fed doesn’t have a clue and they are a follower. The [DS] is pushing their event, the cold weather is coming to end, the window is closing. Trump makes the announcement that he might pardon Flynn. The 16 year plan is now being reversed, the patriots have accelerated the process with this latest event.

People taking out cash at ATM, which most likely be next

To help students and families, President @realDonaldTrump has waived interest on all student loans held by federal government agencies until further notice pic.twitter.com/tLvetJSXfv

GOP Rep: Proposed FISA reforms would not have stopped spying on Trump campaign

Great Job by Judicial Watch. Potentially a treasure trove. Too bad you are not given more help, but it will all work out! https://t.co/rTYq9YCj2Q

So now it is reported that, after destroying his life & the life of his wonderful family (and many others also), the FBI, working in conjunction with the Justice Department, has “lost” the records of General Michael Flynn. How convenient. I am strongly considering a Full Pardon!

Is the Worst Case Scenario for Coronavirus Overblown?… Will 21 Million Americans Really Need Hospitalization? This Is an Irresponsible Report

President Trump is exercising statutory authorities to declare a national emergency in response to the coronavirus.  The unprecedented action the President is taking invites States, territories, and tribes to access over $42 billion in existing funding to combat the coronavirus.

♦ The President is urging every State to set up emergency operational centers and is asking every hospital to activate its emergency preparedness plan.

♦ The declaration will provide HHS with critical authorities to waive:

US Coronavirus Travel Ban Expands to Include UK and Ireland

Coronavirus | Spain locks down its citizens, while France shuts nightlife

GERMANY has just closed its borders within Europe and that includes France.

Isn’t it interesting how socialized countries where the state dominates — China, Iran, Spain, Italy — have suffered the worst responses to coronavirus outbreaks, while private-sector dominated countries such as America and South Korea have so far fared the best 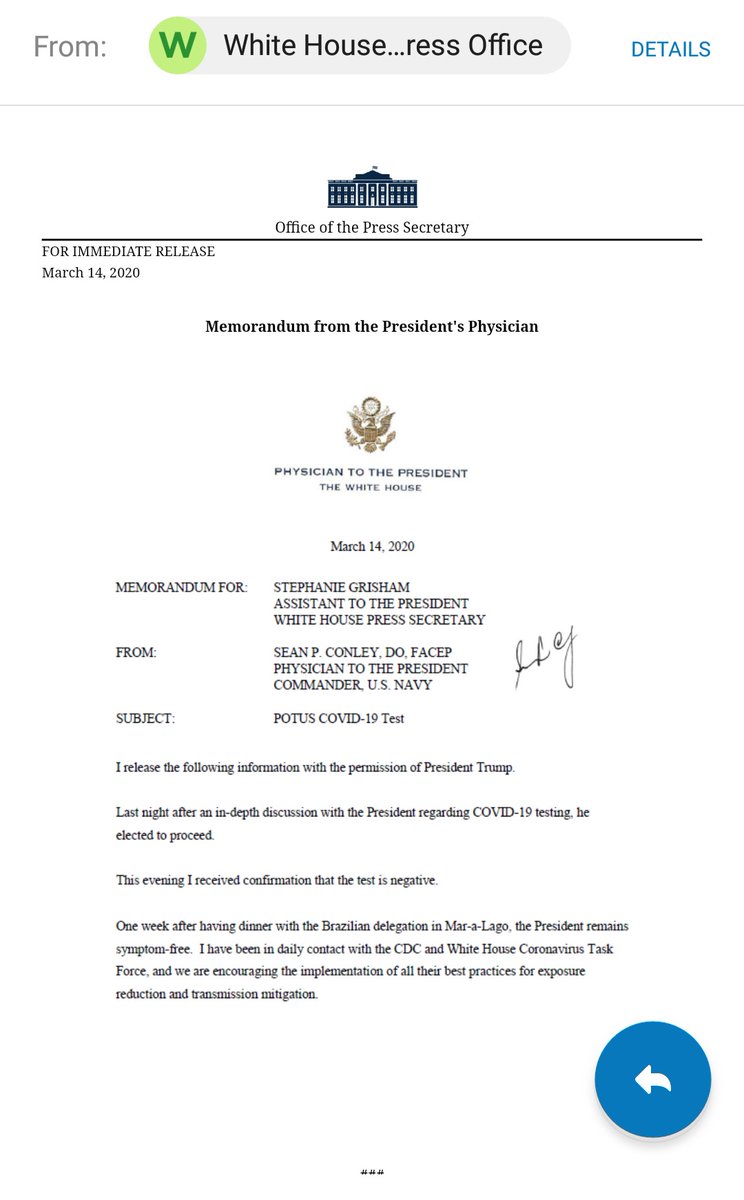 THE FAKE NEWS MEDIA IS THE ENEMY OF THE PEOPLE@realDonaldTrump @DonaldJTrumpJr pic.twitter.com/yb3PEdkuoO

Celebrities infected by the coronavirus

Best Buy Savior Joly to Step Down as Executive Chairman

To those families and citizens who are worried and concerned for themselves and their loved ones, I want you to know that your Federal Government will unleash every authority, resource and tool at its disposal to safeguard the lives and health of our people. pic.twitter.com/uVDY12vXAM

This took place in the Rose Garden, just coming out of a cold Winter! https://t.co/bjHEC9zZkC

It’s going to be a very hot [spring/summer].
Q