What we have been witnessing is the greatest transfer of wealth of the [Elite], Think Soros and others, watch the market, tick tock. The [CB] is now completely exposed. Trump and the patriots are now moving very quickly on transitioning the economy, the new economic system is almost complete. Right on schedule Trump points the finger at the Fed, lower rates and more stimulus. The [DS]/D’s have used their ammunition now the patriots are preparing to make their move. The patriots have been signaling and putting out messages that the stage needed to be set WW. The patriots have countermeasures in place, Think Emergency Alert System.

Truth Must Be Exposed Before Arrests

[666]
Signal to POTUS THEY CONTROL THE MARKET?
SIGNAL?
THREAT?
WELCOME TO THE GLOBAL WAR.
Q

If you want to get money into the hands of people quickly & efficiently, let them have the full money that they earned, APPROVE A PAYROLL TAX CUT until the end of the year, December 31. Then you are doing something that is really meaningful. Only that will make a big difference!

The Federal Reserve must FINALLY lower the Fed Rate to something comparable to their competitor Central Banks. Jay Powell and group are putting us at a decided economic & physiological disadvantage. Should never have been this way. Also, STIMULATE!

Here is the last page of the report which sites the crystal meth. 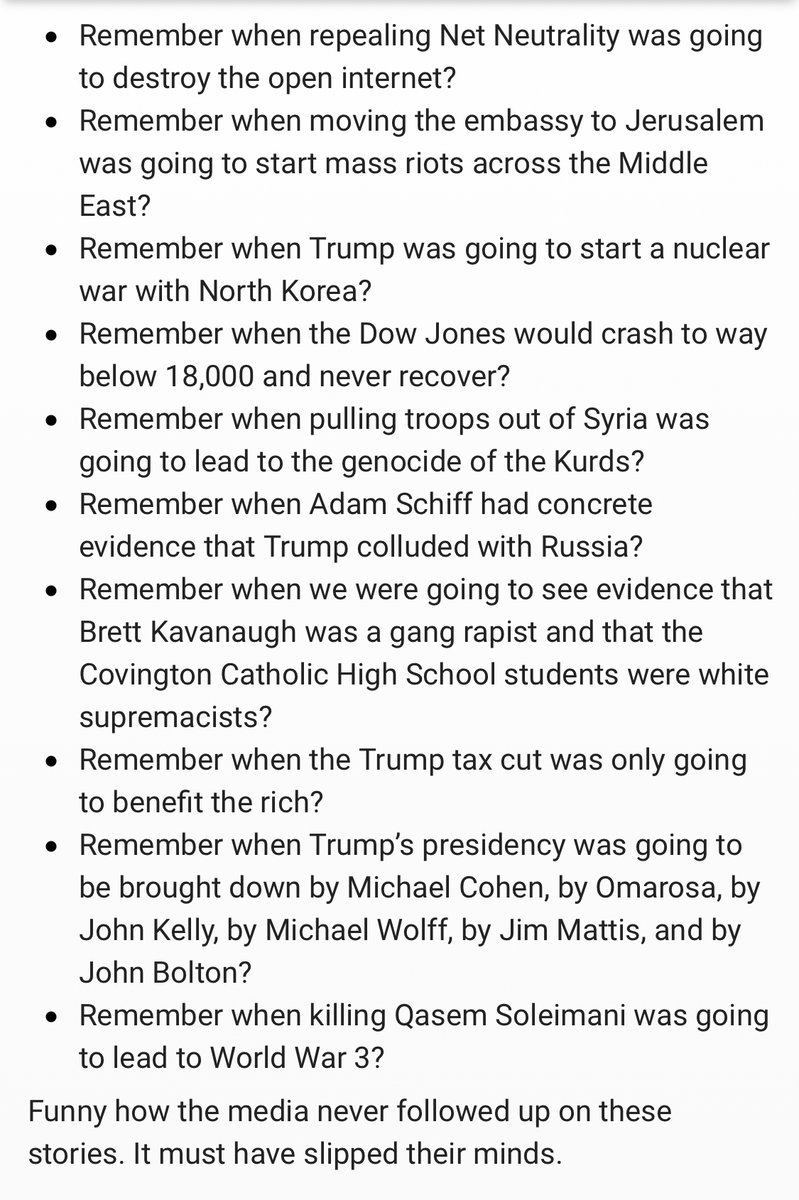 #BREAKING NEWS:
General Siamand Mashhadani, one of the #Iranian Revolutionary Guards Top Commander , was killed by the #American airstrike in #Iraq.

We have effectively destroyed these facilities and expect that they no longer contain the type of advanced Iranian-supplied weapons that were used in the KH attacks.
– Gen Frank McKenzie, CDR CENTCOM pic.twitter.com/ag27fZnCoO

Corornavirus Pandemic Update: US Deaths Reach 37 and 23 Are From the Same Senior Center – Current US Mortality Rate Minus the Senior Center Is Similar to Flu Numbers

To this point, and because we have had a very strong border policy, we have had 40 deaths related to CoronaVirus. If we had weak or open borders, that number would be many times higher!

A looming shortage in lab materials is threatening to delay coronavirus test results and cause officials to undercount the number of Americans with the virus. . .

The false positive results for COVID are off the charts, according to this study published in a medical journal.
H/T @mocleirigh_o
.https://t.co/CtZt52gup6 pic.twitter.com/OqyXkHLxxV

“The Obama White House had to immediately issue an apology for Joe Biden’s remarks, and any alarm that he might have caused, an alarm about a Swine Flu outbreak that took 6 months for President Obama to declare a National Emergency, and that killed 12,000 Americans.” @LouDobbs

Sleepy Joe Biden was in charge of the H1N1 Swine Flu epidemic which killed thousands of people. The response was one of the worst on record. Our response is one of the best, with fast action of border closings & a 78% Approval Rating, the highest on record. His was lowest!

For decades the @CDCgov looked at, and studied, its testing system, but did nothing about it. It would always be inadequate and slow for a large scale pandemic, but a pandemic would never happen, they hoped. President Obama made changes that only complicated things further…..

…. Their response to H1N1 Swine Flu was a full scale disaster, with thousands dying, and nothing meaningful done to fix the testing problem, until now. The changes have been made and testing will soon happen on a very large scale basis. All Red Tape has been cut, ready to go!

Even without competent presidential leadership, we all have the chance to be public servants.

“These dark days will be worth all they cost us if they teach us that our true destiny is not to be ministered unto, but to minister to ourselves and to our fellow [humans]” — FDR 1933

“Calling all [family]. △
We’re almost out of ammo and strategic assets. We’ve lost most lines of communication. We face an unprecedented existential crisis. Every one of you must act in your own way. Do not wait for instructions. Remember the code. Remember your oath.” https://t.co/1kLpgxz54e

If you’re wondering whether it’s an overreaction to cancel large gatherings and public events (and I love basketball), here’s a useful primer as to why these measures can slow the spread of the virus and save lives. We have to look out for each other. https://t.co/Ld7Uc8sPTQ

We’re in this TOGETHER.

BREAKING: The National Guard says troops have been activated in all states, with 1000 expected to be on duty by end of the day in various states.

Who controls the NG?  Normally the states; the state governors.  During peacetime each state National Guard answers to leadership in the 50 states, three territories and the District of Columbia. During national emergencies, however, the President reserves the right to mobilize the National Guard, putting them in federal duty status.
Why was the NG recently activated in select cities within the US?
Can the NG work in coordination w/ the marines?    Yes
Do conditions need to be satisfied to authorize?    The NG is mainly activated by the states, the POTUS needs Congressional approval to activate the NG. If the states activate them, POTUS can take control of them. This would allow the Marines and the NG to work together under one set of orders. This is shown in the Posse Comitatus Act where by the POTUS can take control.
What former President used the military to save the republic and what occurred exactly?
Biggest drop to ever be provided on Pol. Study and prepare. The masses tend to panic in such situations. No war. No civil unrest. Clean and swift.