The [CB] are doing what they have always done in the past. Make people think they are getting what they want, this is what is happening in the UK, the BREXIT will be in name only. Trump is now using the economy, via the omnibus bill to shine the light on congress, he has now exposed congress to the American people. The patriots are preparing to surface. Pence will hold the line, when Jan 6th hits everything will change. The [DS] will react to the news and they will push their agenda, Trump twitter removal, communication blackout. Trump is calling everyone down to DC to block the insurgency, We The People will be the counter insurgency. When do you play your hand, at the last minute, this is what the patriots are doing, Trump is not planning on leaving he is moving ahead with the plan. Ep 2361b – Pence Card In Play, Prepare To Surface, Rig For Red, Hold The Line

Ep 2361a – Trump Exposes Congress Via The Economy, The People Can See Clearly Now

The #COVID19 package, while imperfect, will save jobs and lives. The sooner the bill becomes law – the better.

It will allow millions of businesses to avoid bankruptcy, deliver vaccines even faster, help those unemployed and provide money for families who are struggling.

It’s impossible to be so tone-deaf that you would send this after @realDonaldTrump called out the package for the steaming garbage heap it is.

6 Republican against voted against the relief bill:

Trump explains money laundering, actually he tells the American people this bill is not for you, its for special interest groups and payoffs

Trump has told congress from the beginning what they should do,

If I am sent a Stand Alone Bill for Stimulus Checks ($1,200), they will go out to our great people IMMEDIATELY. I am ready to sign right now. Are you listening Nancy? @MarkMeadows @senatemajldr @kevinomccarthy @SpeakerPelosi @SenSchumer

Source: breitbart.com
There are two bills, the NDAA and the Omnibus Bill, Today Trump kept his word and vetoed the NDAA, it didn’t have section 230, he wanted the troops out of afganistan and this bill kept them troops there, etc…

Trump has aligned everybody against Congress by saying $600 is not enough for the American people. The people are now looking at congress and questioning what they have been doing the last couple of months

1) The President did not outright say he will veto the coronavirus/government spending bill. But he very well could prevent it from being law, via a pocket veto.

2) Pocket vetoes are very rare. Congress has to be in the proper parliamentary posture for this possibility to be in play. But we could very well be in those circumstances now.

3) Under Article I, Section 7 of the Constitution, the President has ten days (Sundays) excluded to either sign or veto a bill. Keep in mind that because of the massive nature of the combo bill, the bill has not even been enrolled yet and sent to the President.

4) But here’s where the pocket veto comes into play.

5) The latest the current Congressional session can end is 11:59:59 am on January 3. That is the drop-dead time for the 116th Congress.

6) A President may in effect “veto” a bill by keeping it in his “pocket” and not signing it if it comes too close to the end of a Congressional adjournment.

7) Congress must adjourn sine die (pronounced sy-nee DY, and is Latin, for leaving without a return date) no later than 11:59:59 pm et on January 3.

In other words, Congress would have to get the President the bill by December 23 to prevent a pocket veto.

8) Otherwise, the President could run out the clock on the Congressional session, effectively blocking any potential override attempt. The President would have to send it back to Capitol Hill with a veto.

9) If he failed to do so in the ten days/Sundays excluded window, then the bill would automatically become law.

14) Had Congress come to an agreement a few days earlier, the possibility of a veto or a pocket veto would not be in play. Congress could simply vote, in the waning moments of the 116th Congress, to override his veto on the coronavirus/omnibus bill.

15) But that didn’t happen. Negotiations lasted through the weekend. There was a computer glitch on Capitol Hill which delayed the House and Senate from considering the bill. And here we are.

Reminder: weeks have passed since news broke about Eric Swalwell’s intimate relationship with a Chinese communist spy who was raising money for his campaign. He still hasn’t answered any questions about his CCP girlfriend. pic.twitter.com/eCSvrGaNZH

They are slow walking the signature verification in Georgia. They don’t want results to get out prior to January 6th. They know what they are trying so hard to hide. Terrible people! @BrianKempGA

“[Judge Warner] pointed out that state law already gives the Legislature the power not only to issue subpoenas but also to find people in contempt for failing to comply…the remedy in that statute allows for someone who refuses to be arrested and jailed.” https://t.co/1jqQsSrXnv

If you want to verify the authenticity of election results, count the paper ballots.

However, the president’s attorney in Nevada @jbinnall testified that they were denied access to review paper ballots. Why? pic.twitter.com/UwSZssJ924

The judicial branch has failed the American people.

The state legislatures do not need a court order.

Will they step up and protect election integrity?

They are who the Constitution specifically grants plenary authority to. They HAVE to act.

Please watch this critical video from Pres Trump on the “Immaculate Deception”…the electoral larceny the Dems want America to accept…pic.twitter.com/9a4zV0zV6N

EMERGENCY ALERT: Does VP Pence have courage to save the nation? He has the power to do it..the question is will he? According to the US Code, he MUST reject the electors from the contested states on the 3rd Wed in Dec, TOMORROW. VP MUST do this TOMORROW 12/23/20. #PenceCard

As President of the Senate, @Mike_Pence

has sole power to tell the states he will not accept their electors b/c they vioated the Constittion. At this point the legislatures will either have to select new electors or stand down This will put Dems on defense from now till Jan 6th
@Mike_Pencecannot LEGALLY accept fraudelent electors Dec 23rd is his highest call of duty is to defend the Constitution from the States failure to follow it. These States are in breach of contract of the Constitution by allowing Governors to circumvent State legislatures
Now lets talk about what Trump did with Texas and the SC

This is brilliant. SCOTUS will reject any case as they have around the election previously. OR if they do take it up, whoever brings the suit will have to #PROVE there was no fraud which we all know there was. It’s brilliant.

Yes, I plan to object on January 6th.

MILLIONS of Americans saw what I saw:

Then we have Mike Pence confirming this move, hold the line

On January 6, @Mike_Pence is expected to count the legitimate votes and THROW OUT THE FRAUDULENT VOTES.

BIDEN: “Our darkest days in the battle against covid are ahead of us; not behind us.” pic.twitter.com/ScLXuKZjqB

The White House announced today that Trump signed an order on Dec. 18 giving John Durham the authority to present classified information to a grand jury investigating the Russian collusion hoax. 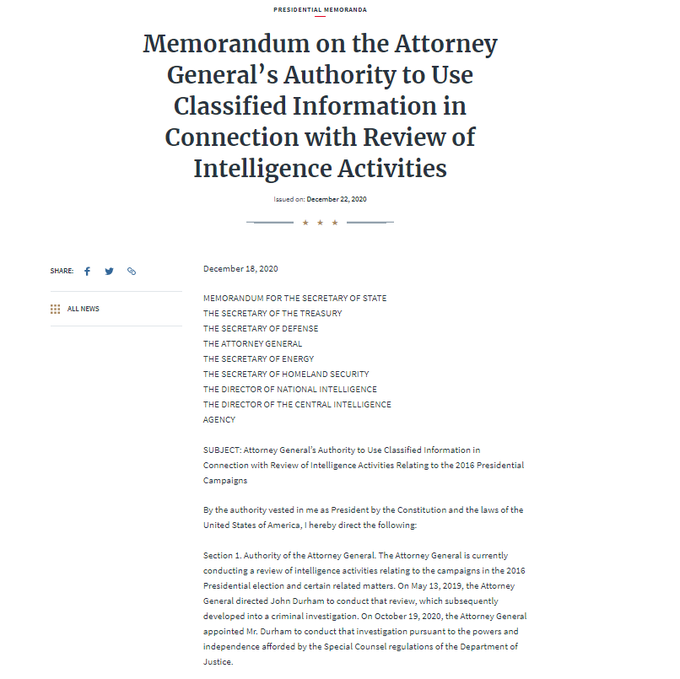 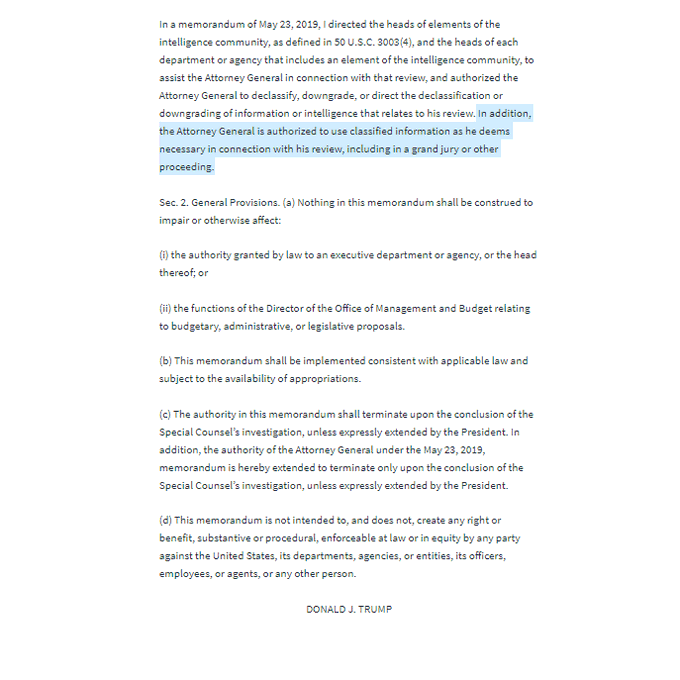 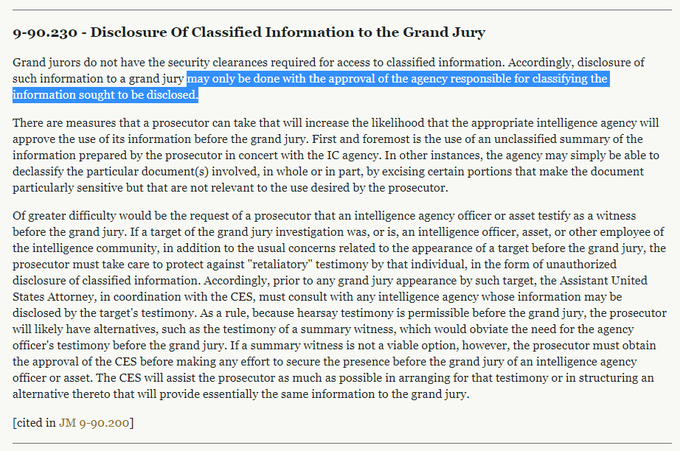 #SpecialCounselDurham New POTUS MEMO authorizing use classified info in criminal Durham probe, “In addition, the AG is authorized to use classified information as he deems necessary in connection with his review, including in a GRAND JURY or other PROCEEDING”@CBSNews pic.twitter.com/t4TKh0Pyku 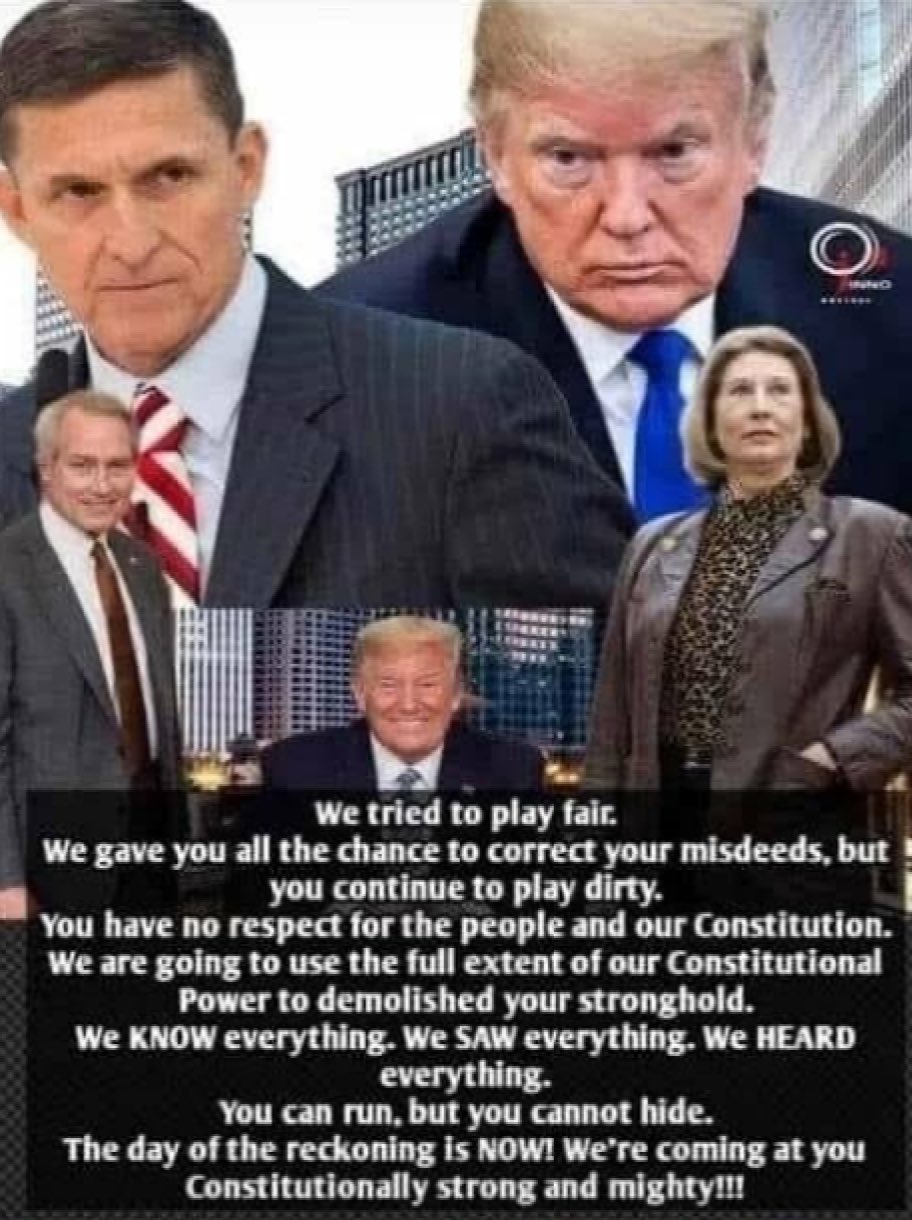 Statement from the Press Secretary Regarding Executive Grants of Clemency