What we are witnessing is the great transition, the entire economic system is shifting, supply chains are changing, the push to remove and expose the [CB] is now in process. Trump and the patriots are helping as many business and people to get thru the transition, a big shift is coming, but in the end the economy is going to be amazing. The [DS] is pushing their agenda, the [V] has been neutralized but the MSM/[DS] and others can not deviate from the script. Trump and the patriots are using this to their benefit, why interfere with your enemy while they are destroying themselves. Trump mentions we are fighting an invisible enemy that is upon us. The stage is set, clock activated.

TAKE A LISTEN TO TRUMP ABOUT THE RECESSION

While the figure of $1000 checks has been mentioned  Mnuchin said the amount may be more.

Mnuchin also made other announcements regarding tax extensions and deferments, however he urged Americans due for refunds to file as soon as possible so they can get their returns processed and over-payments refunded quickly.

Politico reported Trump and Mnuchin will be consulting with Congress to seek to exempt high earners from the emergency checks.

“I think it’s clear we don’t need to send people who make $1 million a year checks,” Mnuchin said. “That’s one of the ideas that we like. We’re going to preview that today, and then we’ll be talking about details afterwards.”

President Donald Trump added that checks for everyone “may not be an accurate way of doing it because obviously some people shouldn’t be getting checks for $1,000.”

“We’ll have a pretty good idea by the end of the day what we’re gonna be doing,” he said.

Mnuchin: Individuals will be able to defer up to $1M in tax payments due to coronavirus

Treasury Secretary Steven Mnuchin on Tuesday said that individuals will be able to defer up to $1 million in tax payments to the IRS for 90 days in light of the coronavirus outbreak.

Gas Prices Could Hit 99 Cents In Some States Due To Coronavirus, Expert Says

Trump will ask Congress for more than $800 billion in economic stimulus: $500 bil in payroll tax cut, $250 bil in Small Business Association loans, $58 billion for the airlines, and a smattering of other items.

✅USMCA ratified by ALL 3 member countries

That amount is nearly four times the recorded security bill of the four adult Trump children—combined.

The troll case will be dismissed w/ prejudice.

How embarrassing for Team Mueller. pic.twitter.com/wfZ78EWgKc

You can read the full Motion here:https://t.co/gdObHEzBCe

This case has been quite entertaining. Concord attorney Eric Dubelier has, at time, run circles around Special Counsel and DOJ lawyers.

Starting with his claim that the DOJ “indicted the proverbial ham sandwich.” pic.twitter.com/9zh5t8L29M

Because it’s quarantine time, here are Dubelier’s greatest hits in the Concord case.

Concord lawyer Dubelier returns the Concord summons to Special Counsel Rhee because it doesn’t comply with the Federal Rules.

Dubelier: I find it disturbing that “you are already behaving in a manner that is inconsistent with the practices of the DOJ” pic.twitter.com/4xHALDpqya

Sidebar: the Concord case was EXCEEDINGLY dangerous because the DOJ twisted the law to fit these defendants.

The alleged illegal activities: Concord interfered with the FEC’s ability to determine whether “statutes were violated.” pic.twitter.com/WXcrj0TlYU

@USAttyHuber “No amount of bank accounts, shell companies, burner phones, or the transfer of millions of dollars to foreign countries will stop us from tracking down money stolen from the government and holding criminals responsible for their wrongdoing.” https://t.co/AwBJ07CL9A

John H. Durham, United States Attorney for the District of Connecticut, and David Sundberg, Special Agent in Charge of the New Haven Division of the Federal Bureau of Investigation, today announced that ROBERT M. PHELPS, 62, of Torrington, has been charged by federal criminal complaint with threatening to murder U.S. Representative Adam Schiff of California.

Phelps was arrested on March 13. Following his arrest, he appeared before U.S. Magistrate Judge William I. Garfinkel in Bridgeport and was released on a $25,000 bond.

As alleged in court documents and statements made in court, on November 12, 2019, the office of U.S. Representative Adam Schiff received a threatening communication through a Meeting Request entry form on Congressman Schiff’s official website. The meeting request included the statement “…I want to kill you with my bare hands and smash your…face in.” In addition, in response to the preferred days of the week for the meeting request, Phelps wrote “Measure your Coffin day.”

Cuomo wants “all states to be treated the same.” But all states aren’t the same. Some are being hit hard by the Chinese Virus, some are being hit practically not at all. New York is a very big “hotspot”, West Virginia has, thus far, zero cases. Andrew, keep politics out of it….

President Trump seems to be saying he wants to murder all of the people in New York as some partisan gotcha against NY’s Democratic government. As a person in New York, I am really against this plan from our President.

I agree with Chelsea: We all have a real responsibility to protect each other right now. https://t.co/7C8K5crz0V

Austrian Archduke Karl von Habsburg, 59, becomes the first royal in the world to be diagnosed with coronavirus – but insists he is ‘fine’ and brands the illness ‘annoying’

Walker County Sheriff’s Office recently kicked off an effort dubbed “Operation March Madness” that has resulted in 122 arrests for the month so far including the capture of U.S. Marshal’s Fugitive Joshua Wayne Burnett.

CALIFORNIA – [….] Mayor London Breed announced what she calls a “defining moment” in U.S. response to the pandemic. Beginning at 12 AM, all residents within the city can only leave home for doctor’s appointments or runs to the grocery store.

It’s the strictest new policy enacted in the nation, and matches the current rules in Italy … which has been the 2nd hardest-hit country in the world.

The Mayor says the rule will remain in effect for at least the next 3 weeks. 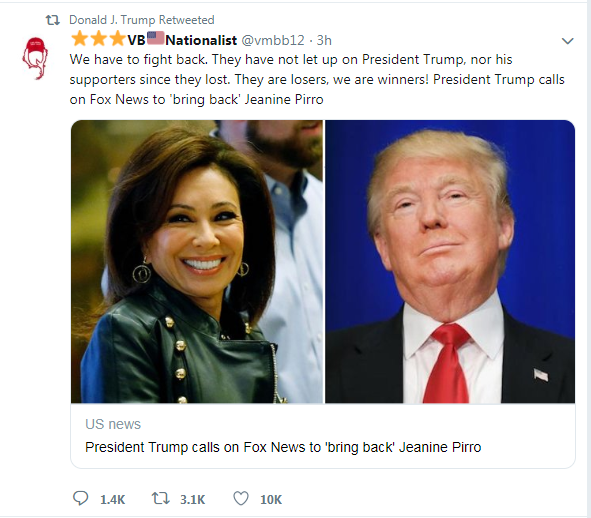 Trump during his presser said “It wasn’t their fault that this thing was all of a sudden upon us.”

Trump said: “We need to take down/get rid of this ENEMY, it’s an INVISIBLE ENEMY.” Enemy. NOT Virus!

The world is at war with a hidden enemy. WE WILL WIN!

#UPDATE The first human trial to evaluate a candidate vaccine against the new coronavirus has begun in Seattle, US health officials said Monday, raising hopes in the global fight against the disease https://t.co/Ckacy4mLyD

**  An Effective Treatment for Coronavirus (COVID-19)