Wait time is over, Trump is now pushing his economic policies forward, timing is everything. Trump is now proposing, stimulus, tax cuts, this is all part of the plan, watch the news the economy is about to take off. Right on schedule Trump attacks the Fed again, calling out the Fed, that the Fed is a follower not a leader, boom!!  The [DS]/MSM are giving their event everything it has, they only have a short period of time, then the event dies out. Trump and the patriots know this. Trump is taking advantage of this, while the MSM/[DS] push fear, Trump is preparing the country and getting ready to expose it all, when all is said and done, Trump will become stronger than before, the [DS] failed in it’s mission. Trump called out the [DS] letting them know it will be over soon, protective measures in place, silent running tactics engaged.

Letting families keep more of their hard-earned money is a great idea!https://t.co/8BW4PKlwxX

Our pathetic, slow moving Federal Reserve, headed by Jay Powell, who raised rates too fast and lowered too late, should get our Fed Rate down to the levels of our competitor nations. They now have as much as a two point advantage, with even bigger currency help. Also, stimulate!

The Federal Reserve must be a leader, not a very late follower, which it has been! 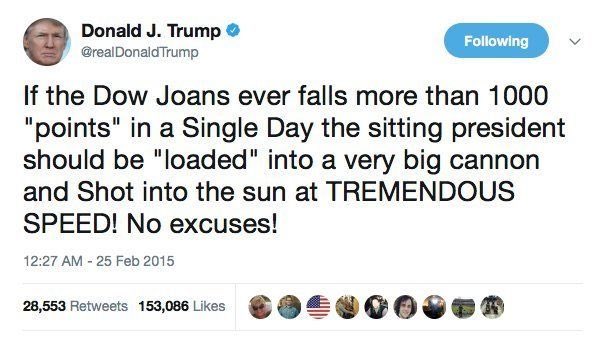 Joe Scarborough deleted his, but this Twitter user caught a screenshot:

Posting it for when he dirty deletes.
It would be a shame to lose such brilliant material that proves how seriously deranged and sick our media truly has become.
Fake tweet, Joe. Now go cry to Mika.

The fake tweet was created by a blogger named Shaun Usher, who admitted to making it after it went viral in 2018,  Despite the tweet being debunked in 2018, Scarborough and Wilson fell for it as the tweet re-circulated social media amid the Dow Jones dropping.

Amazing how quietly this is going on, isn’t it?

Ron Johnson is leading on investigation of Ukraine corruption. Rudy and others have handed off evidence to the DOJ.

Prince Andrew has ‘shut the door on Jeffrey Epstein probe despite very public offer to cooperate’, US Attorney claims

Trump has met his Hurricane Katrina, media declare for the umpteenth time

“It took Barack Obama until October of 2009 to declare Swine Flu a National Health Emergency.

Where was the media hysteria then?” @charliekirk11

The Fake News Media and their partner, the Democrat Party, is doing everything within its semi-considerable power (it used to be greater!) to inflame the CoronaVirus situation, far beyond what the facts would warrant. Surgeon General, “The risk is low to the average American.”

President @RealDonaldTrump has a message for Americans about the coronavirus: pic.twitter.com/xY76ZjYzFE

One thought on “Silent Running Tactics Engaged, Protective Measures Are In Place – Episode 2118”