The market plummeted today, 2.5 trillion wiped out. How do you deflate a bubble and then re-inflate a bubble? The MSM and others are pushing for a recession. Trump and the patriots are ready to turn everything around. What we are witnessing is a restructuring, this might seem painful but it is less painful that what the [CB] had planned. The [DS] is now overdrive with their agenda. The patriots already knew the playbook, the expected this and now it is time to strike back, it’s time. All the pieces are being moved into place. Remember the art of war saying.,“Appear weak when you are strong, and strong when you are weak.”. Q is has come out of 12 days of darkness, the silence is over.  The heat is coming, the storm has arrived.

$2.5 Trillion Wiped Out As World Stocks Crash Most Since 2008

Saudi Arabia and Russia are arguing over the price and flow of oil. That, and the Fake News, is the reason for the market drop!

Good for the consumer, gasoline prices coming down!

Why did Trump respond in this fashion, he is dripping out that everything is changing, we are now in the great transition

2. Rare earth minerals mined in the US

4. Price of oil coming down, petrodollar system coming to an end

7. Nothing can stop this

The Fed Has Rendered Itself Impotent

the fed didn’t react fast enough, did not stop the market from falling

Why did Trump wait and allow the markets to fall?

Who is the leader and who is the follower?

The leader is about to step in

Joe Biden sums up his campaign:

“We cannot win this re-election. We can only re-elect Donald Trump.” pic.twitter.com/TrO7pCUCUT

A manipulated video featuring Joe Biden and spread by President Trump over the weekend has ratcheted up an online war that has put Twitter and Facebook in the middle of a debate over political speech https://t.co/HzUOA44Ifs

The video was NOT manipulated; it was a short clip of what Biden actually said.

Looking forward to an explanation from @TwitterGov on how this is “manipulated media.”

The video was NOT manipulated. https://t.co/p9QrNPYOvf

Everybody, from the president on down, needs to be focused on two things:

1. How to prevent the spread of this virus as much as possible.

2. How to support state & local officials, hospitals, doctors, & nurses so they can take care of the seriously ill.https://t.co/ZrXkmypGV3

This is significant – top health official says the country is moving into “mitigation” and past “containment” https://t.co/8oYPGjXjxN

Summer Heat May Not Slow Coronavirus Outbreak, Experts From Harvard And The WHO Warn

For 72 years, @TIME named a Man of the Year. For their 100 Women of the Year project, they chose some new faces to highlight, and I’m honored to be included alongside 99 remarkable women. https://t.co/9eevJSX5hY pic.twitter.com/nCF1EQG34o

Nothing Can Stop What Is Coming (Q Proof) 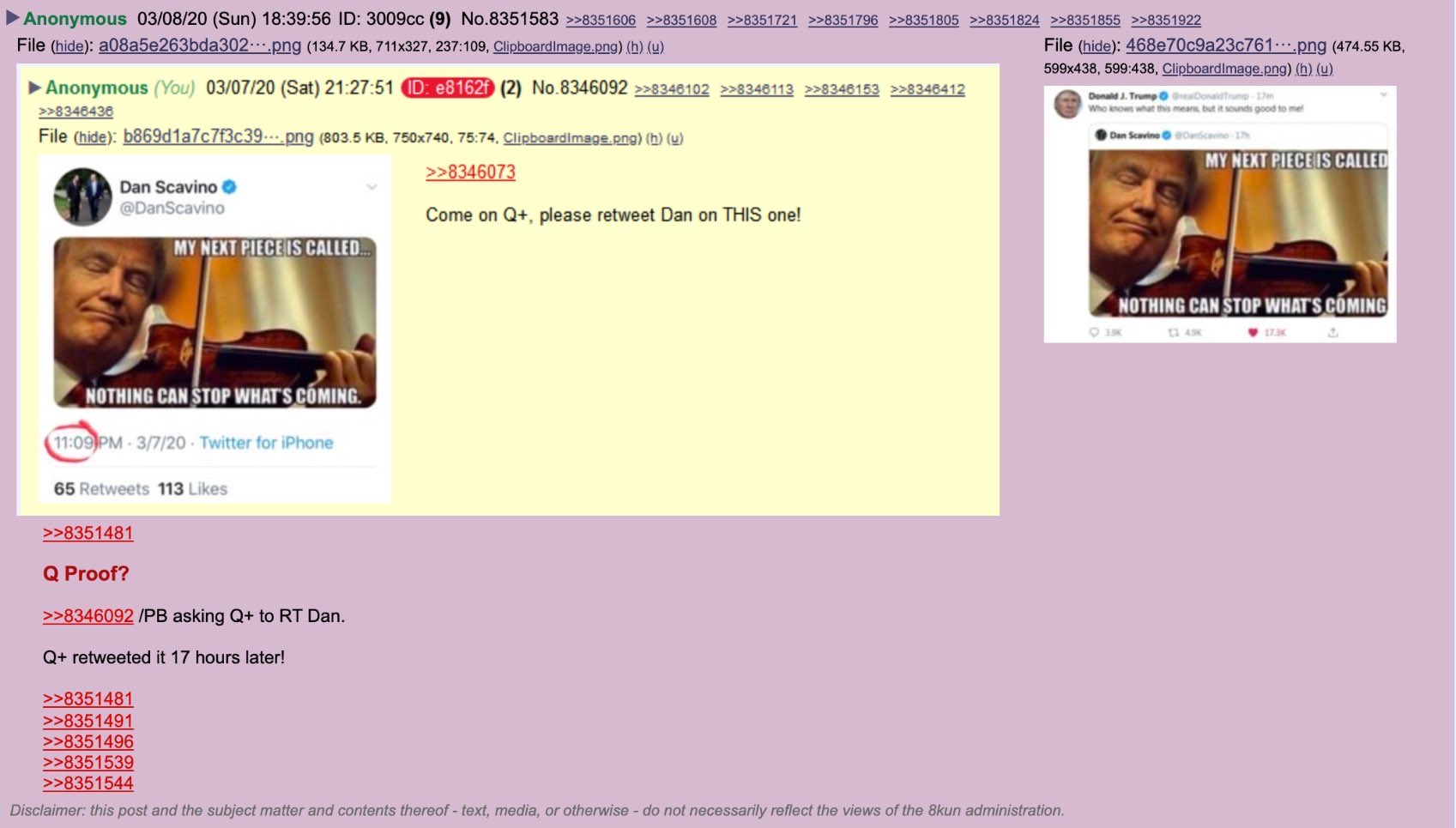 Trump was asked by an anon on 8kun to retweet Dan Scavino’s tweet and he did. Trump is connected to Q.

Nothing can stop what is coming.
Nothing!
Rig for Red.
Q

“Rig for Red” is normally a command used in the Control Room. It is normally used when the boat is going to be surfacing or coming to Periscope Depth at night. The purpose is to give the lookouts and the officer designated to head to the bridge upon surfacing a chance for their eyes to adjust to darkness, or the OOD the same thing before looking through the Periscope. However, with the change to Blue, often times Red glasses are also used to provide the same effect and then Control is changed when the command is given to surface or come to PD.
Q is letting us know that the days of silence is over

https://twitter.com/realDonaldTrump/status/1236980284744241154📁
The Obama/Biden Administration is the most corrupt Administration in the history of our Country!
Silent running is a tactic used when….
Q

When hunting for enemy subs, or DS players

https://twitter.com/RainbowFairy12/status/1236943098103713793
I’ve made an attempt to gather as many Q -related photographs from around the world as I can. Anons with signs, signs standing alone, all with identifiable landscape/architecture/location. This is not about Trump rallies. That’s a different thread.
+comments
Per MSM [Fake News]:
(person in the basement – LARP) who simply asks(ed) questions on a forum [imageboard] that generates(ed) continued [massive (thousands)] MSM attacks & WW movement [Great Awakening]?
Logical thinking.
Backchannels are important when the ‘news’ itself is untrustworthy [controlled].
WWG1WGA!!!
Q