Those in the MSM and who are pushing the idea that the economy will not recover will be exposed. Trump and the patriots have put certain mechanisms in place. The reports that are out now will feed into what the patriots plan to do, take this economy that has been pushed to the brink of destruction and brought it back to life. Trump has control over the [CB], is he using it to pressure or cripple the banking system? The [DS]/MSM are now pushing everything they have, if that doesn’t work they will push a FF. The patriots have now painted the targets, they are locked on, boom week coming.  This is just the beginning, those who committed treason will be held accountable.

De Blasio just said on CNN that New York cannot open because it has no money to do so. That is the first direct call for the federal government to actually fund the operation of major cities. He is talking about roughly $7 billion and suggesting that NYC simply cannot reopen…

Donald Trump And The Fed Could Be About To Destroy The U.S. Banking System

Barr appointed Jensen as a secret Special Counsel last January and sent him into that office to get this stuff from the other end.

They already had it from the FBI end – Durham and Horowitz already possessed it. https://t.co/rWdDrFadXX

It’s about PROVING THE MUELLER SPECIAL COUNSEL HAD IT.

AND THE MUELLER SPECIAL COUNSEL HID IT.

**NOW** you know why it’s so important the unsealed documents Jensen is giving to @SidneyPowell1 have official Mueller Special Counsel stamps on them.

Now they can prove the Mueller SC had this stuff and sat on it. They already HAD it from the FBI’s end. Durham and Horowitz had it long ago.

Understand? Barr KNEW what Jensen was going to find. There was no guesswork involved here. Jensen knew what he was looking for.

They wanted to provide Flynn with this information in a way that simultaneously proved the Mueller SC was hiding it. And that’s exactly what Barr used Jensen to do.

And they did it in a way that didn’t compromise Durham’s ongoing work.

Van Grack and the other Mueller prosecutors are gonna have to go into Judge Emmit Sullivan’s courtroom and try to EXPLAIN to him why they did not produce any of these documents to the court.

It’s going to be BRUTAL.

From comments, people seem to think the Flynn case is over.

THE FLYNN CASE IS NOT OVER.

Van Grack has to go BACK into the courtroom and FACE JUDGE SULLIVAN after it’s now CRYSTAL CLEAR he and his prosecution team DEFIED a Brady order for more than TWO YEARS.

Apparently people who haven’t been paying attention don’t know there was a meeting in court just YESTERDAY in the Flynn case where Covington & Burling, Flynn’s former lawyers, coughed up a staggering SEVENTEEN THOUSAND new Flynn case documents they failed to turn over a year ago.

You’re about to watch not only the Mueller prosecutors but also the Covington & Burling boys be personally shot, skinned, and their heads mounted on Judge Sullivan’s wall.

Research what Judge Sullivan did to the prosecutors in the Ted Stevens case.

What the prosecutors did here… is 1,000 times WORSE than anything that happened with Stevens.

And this time? Judge Sullivan doesn’t even need to appoint his own Special Counsel to investigate.

He did this back in January.

Full-length title: Early treatment of COVID-19 patients with hydroxychloroquine and azithromycin: A retrospective analysis of 1061 cases in Marseille, France

How do you expose those who planned the pandemic?

1. You take those that hid behind the curtain and put them front and center [Fauci,Birx]

EXCLUSIVE — DNI TO SCHIFF: THE TRANSCRIPTS ARE READY TO RELEASE. A big development in the fight over 53 secret interviews the House Intelligence Committee conducted during its Trump-Russia investigation. Acting Director of National Intelligence Richard Grennell has sent a letter to chairman Adam Schiff notifying him that transcripts of all 53 interviews, over 6,000 pages in all, have been cleared for public release. “All of the transcripts, with our required redactions, can be released to the public without any concerns of disclosing classified material,” Grennell wrote to Schiff in a letter dated May 4.

The Intel Committee did the first probe into Russia’s 2016 campaign interference and allegations of Trump-Russia collusion. Even today, its findings make up most of what we know about the affair. As part of that investigation — it was run by then-majority Republicans — the committee interviewed some key witnesses in the Trump-Russia matter: Donald Trump Jr., Steve Bannon, Andrew McCabe, Sally Yates, Michael Cohen, Hope Hicks, and many more.

In the letter, Grennell revealed that the 43 transcripts have been finished since June 2019. Schiff has been sitting on them all that time. Grennell said the final ten have just been finished as well. “I urge you to honor your previous public statements, and your committee’s unanimous vote on this matter, to release all 53 cleared transcripts to Members of Congress and the American public as soon as possible,” Grennell said. Just in case Schiff is still not interested, Grennell added, “I am also willing to release the transcripts directly from the Office of the Director of National Intelligence, as to ensure we comply with the unanimous and bipartisan vote to release the transcripts.”

Sorry, Adam, but the game is now over [it doesn’t end here].
Locked on target.
[it takes time to remove/install the right people [sleepers]]
We are ready.
Q

Imagine reading Congressional transcripts where 53 mostly Obama-era people are asked “Do you have any evidence of Collusion?” and getting 53 negative responses. That’s what Schiff doesn’t want anyone to see https://t.co/uBJrld2pUZ

Game Over, Adam. Anons Are Ready To Dig 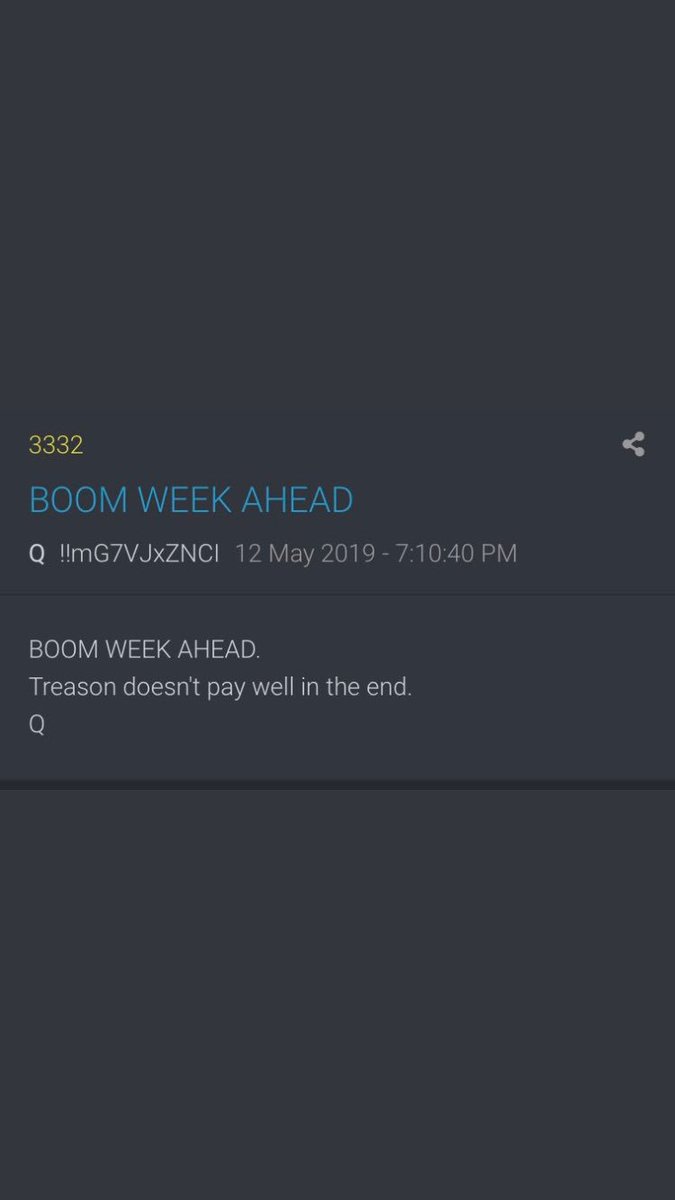 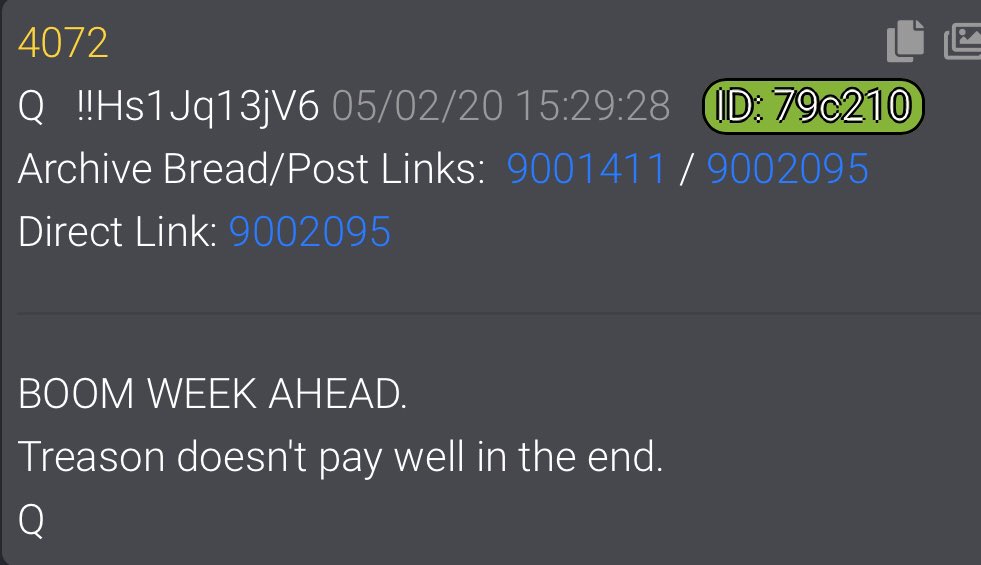 Attempts by Dems, FAKE NEWS, and those ‘guilty of TREASON’ to shape the public narrative [prior to] by providing FALSEHOODS will FAIL.
TRUTH TO LIGHT.
NO SLEEP IN DC.
Q
Will the DS/MSM/Social Media platforms try something to clog the news cycles, most likely yes

The Day The Earth Stood Still – It’s only on the brink that people find the will to change.

Sometimes you can’t TELL the public the truth.
YOU MUST SHOW THEM.
ONLY THEN WILL PEOPLE FIND THE WILL TO CHANGE.
Q

The judge told Shelley Luther she
could avoid jail time if she apologized, admitted she was wrong, and agreed to close her hair salon until it was allowed to open.

7 days in jail for cutting hair?? This is NUTS. And government officials don’t get to order citizens to apologize to them for daring to earn a living. https://t.co/3rulRlN0gE

This is Eric Moye. Vile excuse for a man.

Q: Can I obtain detailed information about a current FBI investigation that I see in the news?
A: No. Such information is protected from public disclosure, in accordance with current law and Department of Justice and FBI policy. This policy preserves the integrity of the investigation and the privacy of individuals involved in the investigation prior to any public charging for violations of the law. It also serves to protect the rights of people not yet charged with a crime.
Q 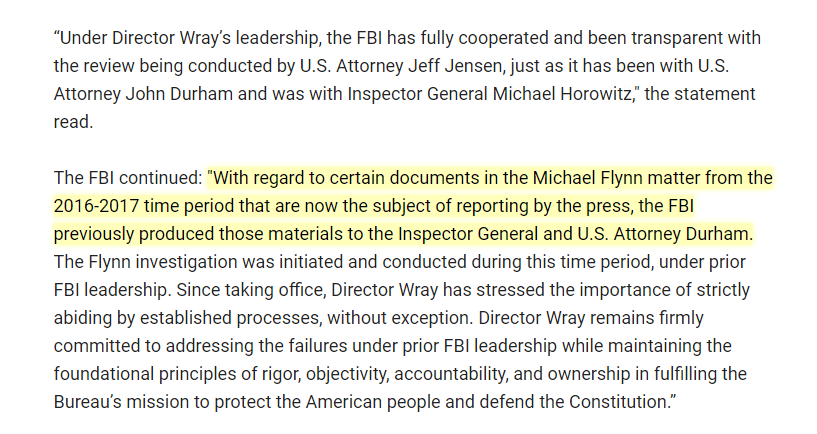 Chris Wray should be careful before issuing statements like this about “prior leadership” to check the dates on the FISA applications that the IG examined in his most recent interim report.#justsaying https://t.co/eIJnbeBzoh

Wray has to do 2 conflicting, yet necessary things:

1. Restore public confidence in the FBI
2. Speak to the FBI’s role in illegal FISA procedures on behalf of Hillary

Think of him like the anti-Comey. Quiet, ethical & OBJECTIVE. The moment Wray looks biased, it all falls apart. https://t.co/ohPhrgEPR6

If you want some kind of outspoken Trump loyalist leading the FBI, you’re asking for another Comey. I don’t want that. And btw, neither does Trump:

“This should never be allowed to happen to another President again.”

Trump is trying to fix a corrupt system. Not reinforce it.

The Spy Who Drove Her: Dianne Feinstein and Chinese Espionage

Five years ago, Senator Dianne Feinstein, the California Democrat who then chaired the Intelligence Committee, was approached by the FBI. The bureau had learned that a staffer in her San Francisco office was a Chinese operative “run” out of Beijing’s consulate in that city. It appears that he had started as a legitimate employee but was at some point, likely on a visit to the East, turned by a member of the Chinese Ministry of State Security.

The staffer had served the senator for some two decades as a general office lackey, a liaison to the local Chinese community, and, most important, the senator’s chauffeur whenever she was in San Francisco, her hometown. Driving Ms. Feinstein would have been a plum assignment for an intelligence operative; it allowed the Chinese access to the senator’s comings and goings and who she met with, as well as to any conversations she might have had in the car and any documents she may have left in it.

According to a column in the San Francisco Chronicle, the FBI did not believe the driver had managed to nab anything confidential. And after being approached by the bureau, the senator promptly fired him. It also appears that, ultimately, no charges were filed against the driver. Feinstein’s press secretary ignored requests for comment on this story; her office has issued standard boilerplate to media outlets saying that the senator was “mortified” by the revelation that she had a spy on her payroll.

Connected?
How do you comm [secure] non_publicly?
Define ‘backchannel’.
Q

Diane Feinstein Is the Bridge (Backchannel) to  China

DF used her chauffer as a backchannel for China. 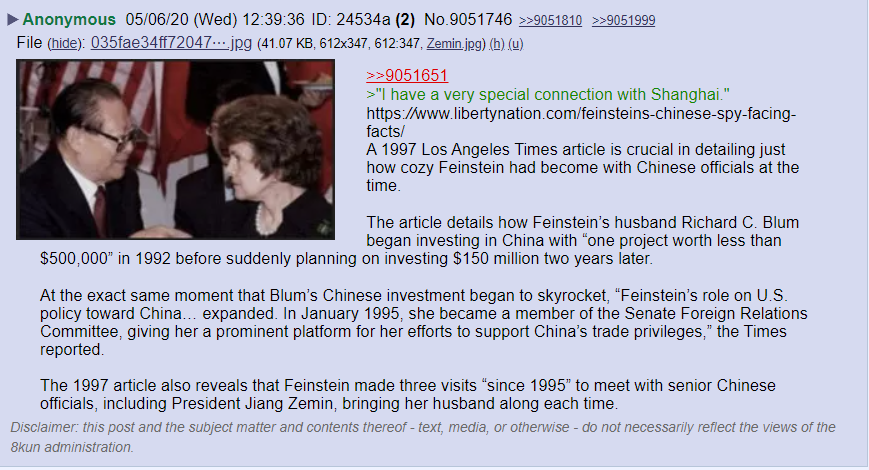 >>9052050
Is it really so hard to believe that there are elected officials in our gov who are enriching themselves at the expense of our Country [NAT SEC]?
Why do they always include their spouse, son, daughter, etc.?
Follow the money.
Q

How does the DS get  “Leverage of certain politicians, blackmail, or going along with the plan and making money off of scams, those who accept or blackmailed are offered more powerful positions, thats why you see the same people in gov for 15-30 years  ” 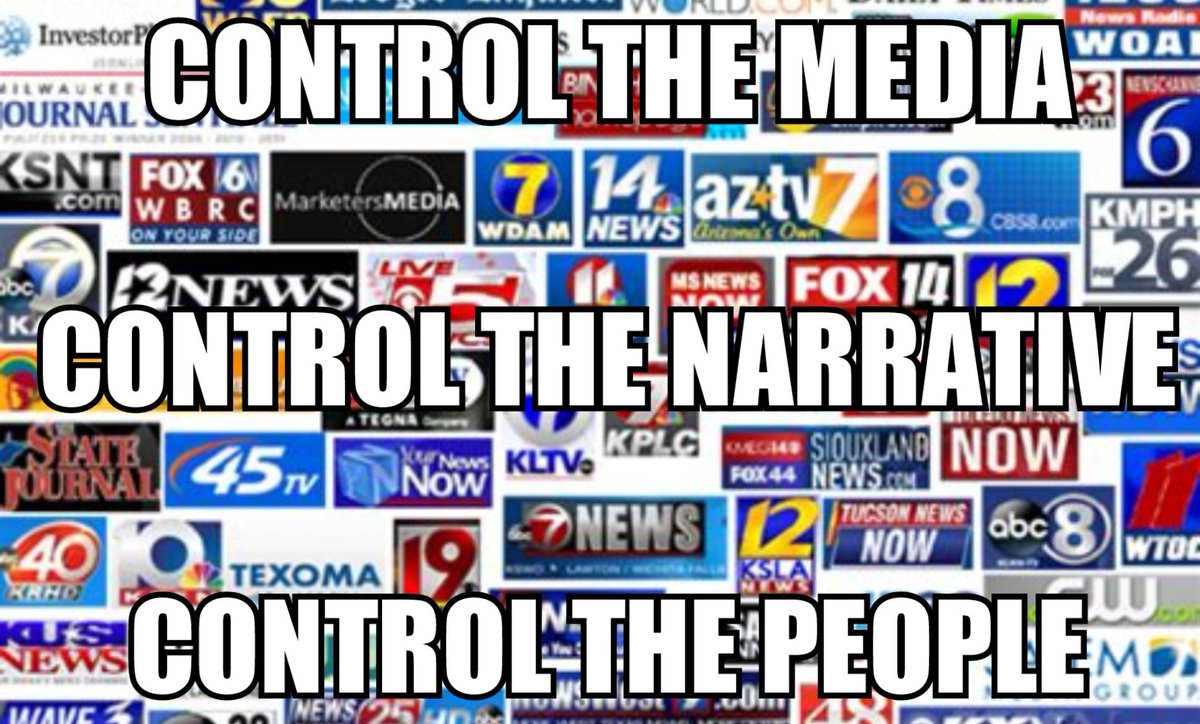 All assets deployed.
Social media yesterday verse today verse tomorrow.
WIN BY ANY MEANS NECESSARY.
Everything is at stake.
Q

Comey, Schiff and others are now painted targets

5 thoughts on “Targets Have Been Painted, Treason Doesn’t Pay Well In The End – Episode 2167”