Skip to content
Reports
November 11, 2020November 12, 2020 x22report
SPREAD THE WORD
113,163
The [DS]/CB are now making their move to reset the entire global economic system. Dark Winter is a cover story for their plan. The plan is make people think their is a resurgence of the virus which will lead to lockdowns. These lockdowns will destroy the global economy. The MSM are preparing the people for this. The [DS]/MSM and the [CB] have now been trapped by Trump and the patriots. Their plan was not to about an election, not about keeping everything the same, it’s about bringing the entire corrupt, diseased system down on the establishment. The entire plan has been created to take it all down. Timing is everything the world is watching.

Analysis: Job growth will slow during a Biden presidency: The easy gains are almost gone https://t.co/0kmNstMlol

Joe promised not to declare victory until the election results were independently certified. pic.twitter.com/IvwIJylwZN

JB is now paying all those people back that helped in cheat in the election, MSM, Social Media companies etc…

One Georgia resident, attorney Paul J. Dzikowski, attempted to obtain more information on the reported water main break in Atlanta.  He sent a letter to and requested any information related to the water main break under the Georgia Open Records Act.  This is what he wrote in his request:

Please accept this correspondence (and the attached letter) as a request for production and inspection of records under the Georgia Open Records Act, O.C.G.A. § 50-18-70, et seq. (the “Act”). Please produce, for inspection and copying, the following records:

• ALL “Public records” related to the burst pipe at State Farm Arena that occurred on or about November 3, 2020, which impacted the counting of ballots by Fulton County authorities, including and not limited to internal and external communications with any person(s), communications with Fulton Co. Board of Registrations and Elections, memoranda, notes, work orders, requisitions, invoices, repair records, and all other public records.

In response the only public records generated as a result of the alleged “burst pipe” that halted the counting of ballots in Atlanta (Fulton Co.) were a few text messages.  These messages were with the Sr. Vice President of the Atlanta Hawks, Geoffrey Stiles, who called it a “slow leak” that was “contained quickly,” and he said the entire thing was “highly exaggerated.” The evidence is now pouring in, the MSM/DS cannot counter all of this information so they are shifting the narrative, but before we get to the shift look how easy it is to gain admin access, it took under 2 minutes with no tools

Remember when Project Veritas did the story of USPS worker who reported that ballots were being back dated, well the MSM is trying to cover up the story but it has failed big time.

#USPS IG investigators informed Committee staff today that they interviewed Hopkins on Friday, but that Hopkins RECANTED HIS ALLEGATIONS yesterday and did not explain why he signed a false affidavit.

BREAKING: Here is RAW AND UNEDITED Audio of The More Than 2 Hour Coercive Interrogation of Military Veteran and @USPS #BackDateGate Whistleblower Richard Hopkins by Federal Agents He Believed Were There To Help Himhttps://t.co/IJ5JDkIyUc#ProtectRichard

You are looking at BALLOTS! Is this what our Country has come to? pic.twitter.com/cI2ZTItqUi

🇺🇸 — BREAKING: Georgia Secretary of State announced that they will conduct a ‘Hand Recount’ of the presidential race. pic.twitter.com/kXtm5fDGzF

Sampling of sworn affidavits from poll challengers in Detroit in new Michigan lawsuit. Do Biden, Ds, media believe this is acceptable behavior? That everything was above board? That this doesn’t call into question election integrity & demand open, honest, transparent accounting? pic.twitter.com/5eYll7Osif 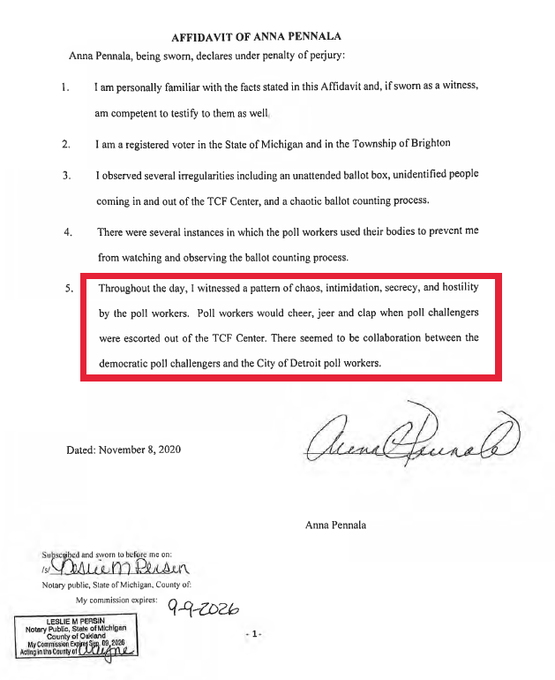 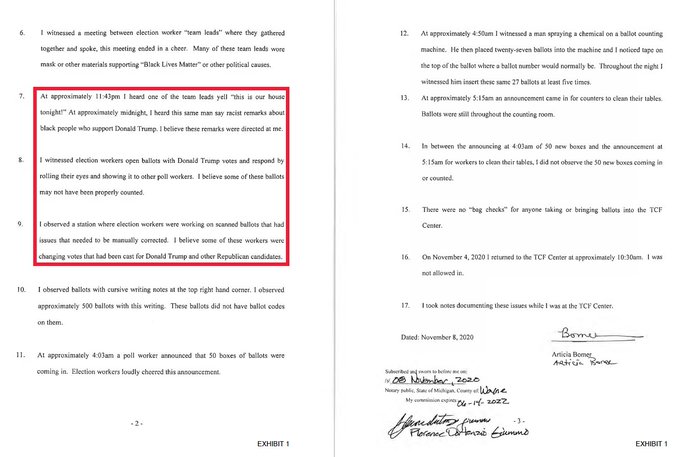 If you’re an officer / agent for Dominion, you know you’re f-d…right?

Do you understand what the term, “national security threat” brings with it?

People much smarter than you working tirelessly to bring you down.

I know some of them.

“I don’t care what state you’re in, this computer voting system is wide open to fraud and intervention.” @LouDobbs True, and wait until you see what’s coming!

BREAKING: #TrumanBlack Has Created A Computer Script That Combs Thru All The Election Data & Identifies Votes That:
“SWITCHED” FROM #TRUMP TO #BIDEN
& Votes “LOST” That Disappeared!
Data Shows ALL SWITCHED Votes WERE TAKEN FROM TRUMP & GIVEN TO BIDEN!
Site:https://t.co/kZBtfnHajR pic.twitter.com/4GFFWV6x1F

Lost Votes means that the total amount of votes counted decreased by that amount throughout the counting. I’ve only done states that use Dominion Voting Systems so far.

THIS DOESN’T TAKE INTO ACCOUNT ALL THE HUNDRED THOUSANDS OF TRUMP VOTES DESTROYED, BURNED AND RIPPED APART, THE THOUSANDS OF BALLOTS JUST MARKED FOR BIDEN. THIS IS THE EVIDENCE WE’VE FOUND SO FAR.

Lets go back in time to Oct 2018 when Trump tweeted this out.

All levels of government and Law Enforcement are watching carefully for VOTER FRAUD, including during EARLY VOTING. Cheat at your own peril. Violators will be subject to maximum penalties, both civil and criminal!

Scoop: Mark Tomb, a Pentagon policy official, has been fired as the unusual shakeup at DoD continues. https://t.co/H5WT5bpHiz

The [DS]/MSM are now pushing their reset agenda. They are using the lockdowns to bring down the world economy

The MSM/DS are now shifting their narrative, no fraud narrative is falling apart, just like the no riots narrative fell apart, since they are pushing that JB has is the new president, the DS/CB invisible enemy have instructed the MSM to start pushing  the new agenda and to fall inline with the dark winter operation

Under U.S. Constitution, state legislatures in PA, GA, AZ, MI, and WI can reject electors or appoint a clean slate of electors to support @RealDonaldTrump. For example, Pennsylvania legislature can reject compromised election and swing its Electoral College votes over to Trump. https://t.co/BxZjNVTCEZ

THE ONLY WAY TO REGAIN THE TRUST (RE: EQUAL JUSTICE UNDER THE LAW RE: WH RE: INTEL RE: FBI RE: DOJ RE: SENATE RE: CONGRESS RE: FVEY RE: OUR GOV’T) OF THE ‘MAJORITY’ OF THE AMERICAN PEOPLE IS TO PROVIDE TRUTH, TRANSPARENCY, AND PROSECUTION OF ALL THOSE WHO ‘KNOWINGLY’ TOOK PART IN THIS ILLEGAL MANUFACTURED EFFORT [ATTEMPTED COUP] TO TAKE DOWN THE PRESIDENT OF THE UNITED STATES [1].
[1] OPENS THE DOOR.
THE GREAT AWAKENING.
Q
Dark Winter, taking down the entire corrupt diseased system