Ep 2571b – The Tide Has Turned, Flags Out, The Country Will Be United Once Again Trump has trapped [JB] and the [CB] by using tariffs, now Biden is in a tough spot when dealing with China and Europe, no matter what he does he does not win. The [CB] are panicking over alternative currencies, the people will decide in the end. The patriots are now pushing forward, Big Pharma FDA, CDC and Fauci are now being exposed. The people are no longer believing what they are saying, the people are turning on them. Documents have been produced showing Fauci lied to congress and the American people, tick tock time is up.  The tide is turning, flags out patriots. The country will begin to come together, think crimes against humanity, treason, the forensic audits. Buckle up it’s going to get rough as the patriots produce the evidence and show the people the truth.

Bitcoin tumbles 10% as El Salvador adopts it as legal tender

The US helped facilitate the departure of four American citizens from Afghanistan via an overland route to a third country, a State official says. https://t.co/dgcATuXgsq

This is a flat out lie. The Biden Administration abandoned them. Let’s be clear, it was our team of patriots who worked around the clock for two weeks to get them out, despite the many roadblocks from the State Department. https://t.co/75lA8jOLHO

“The trove of documents includes two previously unpublished grant proposals that were funded by the NIAID, as well as project updates relating to the EcoHealth Alliance’s research, which has been scrutinized amid increased interest in the origins of the pandemic.”

The materials confirm the grants supported the construction–in Wuhan–of novel chimeric SARS-related coronaviruses that combined a spike gene from one coronavirus with genetic information from another coronavirus, and confirmed the resulting viruses could infect human cells.

The materials further reveal for the first time that one of the resulting novel, laboratory-generated SARS-related coronaviruses–one not been previously disclosed publicly–was more pathogenic to humanized mice than the starting virus from which it was constructed…

The documents make it clear that assertions by the NIH Director, Francis Collins, and the NIAID Director, Anthony Fauci, that the NIH did not support gain-of-function research or potential pandemic pathogen enhancement at WIV are untruthful.

How is it possible that our intel agencies were unable to confirm the origin of COVID-19 but The Intercept could confirm it with a simple FOIA request?

What does that tell you?

I have already asked the DOJ to review Fauci’s testimony for lying to Congress. This report should make it abundantly clear that he needs to be held accountable.
https://t.co/PfuketQaWc

Did you know the contracts Pfizer makes governments sign for vaccines includes a section for Emergency Use Authorization {EUA] where the contract clearly states the EUA for their experimental vaccine can be in force only as long as no effective drug treatments for COVID are found? This explains the incentive to pretend there are no cheap drugs with prophylactic properties vs. COVID. As usual, you have to follow the money.The moment they admit HCQ/zinc, or Ivermectin is an effective prophylactic against COVID, the EUA for the Pfizer, Moderna and Johnson & Johnson vaccines is rendered null and void and the vaccination train halts. They simply cannot let that happen.

Fewer Americans Than Ever Think Biden Has A Clear Plan To Fight Covid, Poll Finds 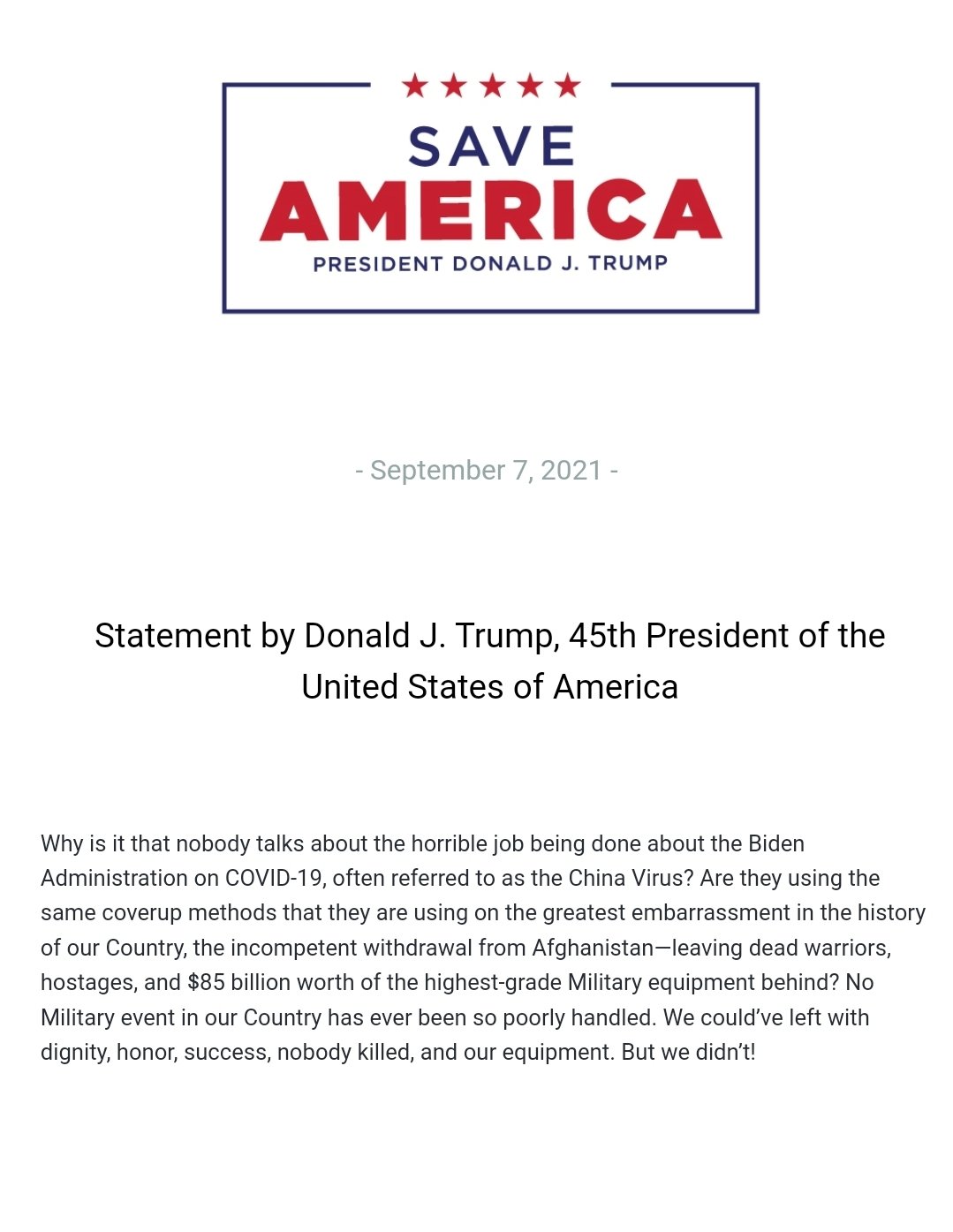 Lawyer for January 6 Clients Released From Hospital, Says Reports That He Was ‘Missing’ Are False
Today at 1:15 PM

>> Law enforcement within Washington are looking at hotel bookings for those possibly attending the Sept. 18 “Justice for J6” rally, I’m told by officials directly familiar.

FBI trying to stop a rally in defense of political prisoners.

Media doing its part to promote baseless claims of violence.

Remember when y’all thought this was really about January 6? https://t.co/cyQokQd2Dp

Hotel bookings. We’re letting in who knows how many illegals with criminal records and criminal intent while USCP/DC Metro/FBI investigating hotel reservations at DC hotels next weekend.

>>5176626
More importantly, why is the WASH POST leading the attack vs ‘Q’?
Who owns the WASH POST?
Who funds Amazon?
Who targeted NSA re: SURV expose/prevent pre U1 / IRAN?
Why are we attacked daily by the largest news co’s on the world?
Use caution – high follower count targeting to direct ‘deep in narrative’ mob as method to remove.
Q

“Election integrity is now law in the state of Texas.” pic.twitter.com/iViAQZZ6SB

Image Name: patriotic-flag-american-freedom-708237-4487849.jpg
Filename: ecaa72306e61f77fc86a22f16483c111a2677bad2ffa8853bf3502dcc441a8ce.jpg
“Freedom is never more than one generation away from extinction. We didn’t pass it to our children in the bloodstream. It must be fought for, protected, and handed on for them to do the same, or one day we will spend our sunset years telling our children and our children’s children what it was once like in the United States where men were free.”
“You and I have the courage to say to our enemies, “There is a price we will not pay.” “There is a point beyond which they must not advance.”
“We’ll preserve for our children this, the last best hope of man on earth, or we’ll sentence them to take the last step into a thousand years of darkness.”
-Ronald Reagan
[BOOM WEEK]
Q