Skip to content
Reports
February 26, 2020February 27, 2020 x22report
SPREAD THE WORD
The globalist system is about to change, the event the [CB]/Elite have pushed is now backfiring on them, instead of hurting Trump economic system it has hurt their system. Trump tweeted what is really happening with the event, its about the economy, the stock market, their way of life. The Fed is saying there is no need to cut rates. Kudlow says everything is contained and at this time no need to cut rates, game theory. The [DS]/D’s are pushing the latest Coronavirus event, they are all in. Trump sent a message, the market went up. The game has just begun. Trump is now suing the NYT, libel  laws, end of MSM. Q dropped more bread, and there seems to be a silent war countdown happening, we are now at [T -2] and counting.

Coronavirus is a game-changer for globalisation, but no-one knows how it’s going to unravel

Low Ratings Fake News MSDNC (Comcast) & @CNN are doing everything possible to make the Caronavirus look as bad as possible, including panicking markets, if possible. Likewise their incompetent Do Nothing Democrat comrades are all talk, no action. USA in great shape! @CDCgov…..

Fed should not cut rates since the U.S. has ‘contained’ coronavirus, White House economic adviser says

#Winning. Now the President can legally starve into submission the corrupt failed states who all but tore themselves out of the union with their treasonous and unconstitutional policies. Illegal immigration is the strategy for our domestic enemies to seize power at the ballot. https://t.co/e8Boq59W0Q

Today, Team Trump filed a libel lawsuit against the New York Times over a story falsely reporting as fact a conspiracy with Russia. 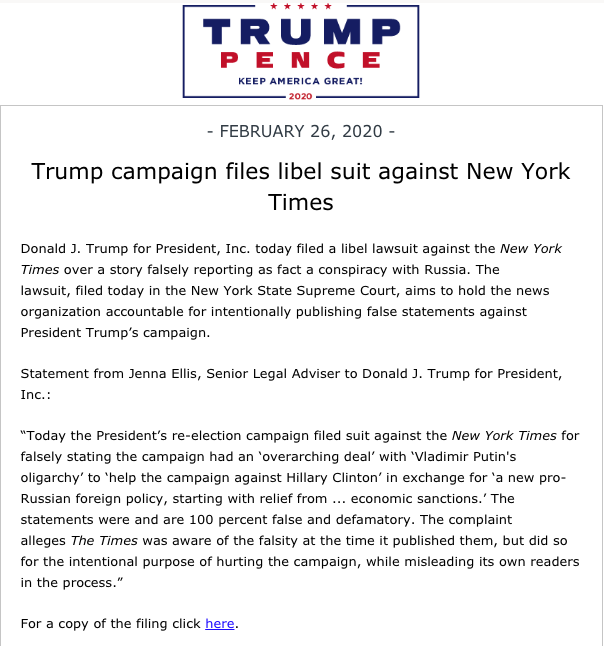 As a national political reporter at a legacy broadcaster, Wright said he feels left behind by the new digital media.

“We live in a moment where people live in echo chambers and the truth suffers and, in an effort, to compete, we’ve become an echo chamber ourselves. We’ve been in the mainstream media we have an effort to match the zippy news cycle with responding to the latest tweet and trying to keep pace with the desperate pace of it all.”

The desperate pace means reporters like him lose focus, he said.

Does anyone think that if there were a consequential national security/economic crisis that this Administration has the intellectual capacity and policy acumen to navigate the nation through it? The answer, frighteningly, is no. Now we have the coronavirus and they have no idea. pic.twitter.com/Yr3K0SKtfi

They are facing a “Crisis” pic.twitter.com/KbpaGSzYPd

Just Like Her Corrupt Brother Rod Rosenstein — The CDC’s Dr. Nancy Messonnier, Drops a Bomb on President Trump While On International Trip

President @realDonaldTrump is leading an aggressive coronavirus response & preparation effort. The Administration has:

Because of President Trump’s early containment strategy, local governments have been granted time to prepare.

Meanwhile, the White House is educating the public, expediting development of a vaccine, and minimizing the risk of medical shortages or disruptions to supply chains.

Do you see a pattern

Why isn’t Q mentioning the coronavirus 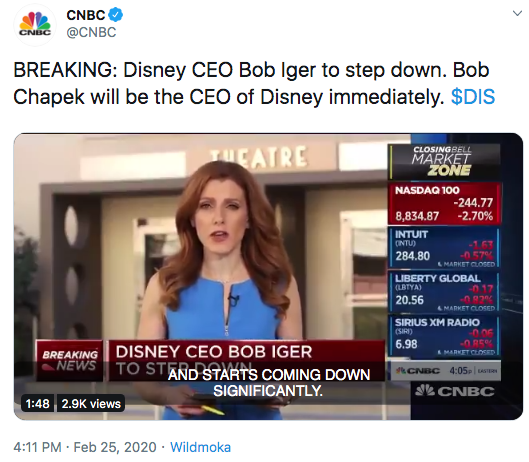 Iger didn’t actually quit disney, he stepped down as ceo.  Many CEOs step down but they don’t immediately leave their companies, they remain as a member of the board, the become advisors.

Q has been ending his post with the following saying,  : “The Silent War Continues.”

Q has been posting “The Silent War continues” lately with fewer periods each time.

It seems Q is counting down to something and we are at 2. 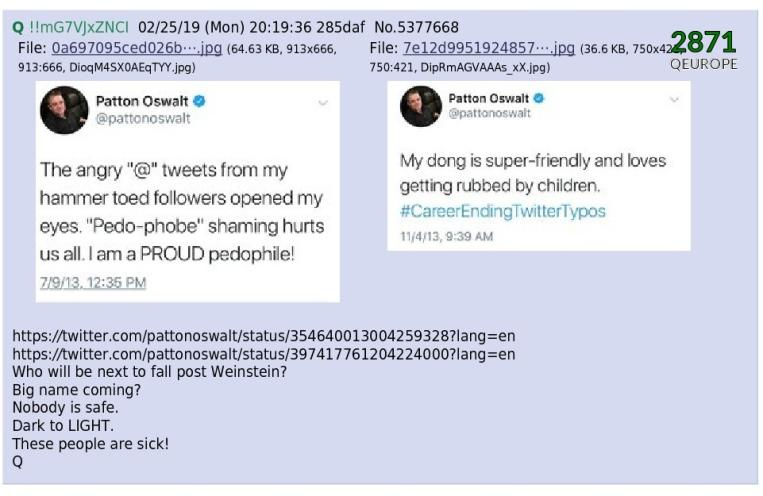 Yesterday we talked about this post and Q reposted it, it is from last years,  Is it a coincidence that Iger stepped down as CEO of Disney 1 day after Weinstein was convicted of rape.

Major CEOs who stepped down in the past month:

Do you know how old the #ResignationList becomes tomorrow? pic.twitter.com/izf1yMVhU7

By a vote of 53-44, the Senate has failed to pass the Born-Alive Abortion Survivors Protection Act, which would have required doctors to provide medical care to infants born alive after an attempted abortion procedure. The bill — sponsored by Senator Ben Sasse (R., Neb.) and cosponsored by 49 of his fellow Republican senators — needed 60 votes to overcome the legislative filibuster.

Three Republican senators did not vote on the bill: Kevin Cramer (N.D.), Lisa Murkowski (Alaska), and Tim Scott (S.C.). According to their communications directors, both Cramer and Scott missed the vote due to flight delays.

These people are sick!
Q

Forty-one Democratic senators voted this afternoon to block the Born-Alive Abortion Survivors Protection Act, successfully filibustering the legislation and preventing it from receiving a final vote. The bill would have required doctors to provide standard medical care to newborn infants who survive abortion procedures.

Fifty-six senators voted in favor of the legislation, including three Democrats: Bob Casey Jr. (Pa.), Doug Jones (Ala.), and Joe Manchin (W.Va.). All three also voted for the legislation when it came to the floor last February, though Jones was considered a potential “flip” vote this year, as he is up for reelection this November.

Both Susan Collins (Maine) and Lisa Murkowski (Alaska) voted for the bill as well, despite the fact that they often break from the Republican Party on legislation that has anything to do with abortion. Last year, Murkowski did not vote on the born-alive bill.

Three senators who are running for president — Bernie Sanders (I., Vt.), Amy Klobuchar (D., Minn.), and Elizabeth Warren (D., Mass.) — did not vote. All three voted against the legislation last February.

Why did Q post this, to let us know that 1 year ago the D’s blocked the passage of the born-alive bill in the senate

Biblical: Locust Swarms and Rivers Running Red Around the World

https://twitter.com/Inevitable_ET/status/1232333000853147648📁
It’s going to be Biblical Rev 9:3 “Then out of the smoke came locusts upon the earth, and power was given them, as the scorpions of the earth have power.” Saudi Arabia
Finally, be strong in the Lord and in his mighty power. Put on the full armor of God, so that you can take your stand against the devil’s schemes. For our struggle is not against flesh and blood, but against the rulers, against the authorities, against the powers of this dark world and against the spiritual forces of evil in the heavenly realms. Therefore put on the full armor of God, so that when the day of evil comes, you may be able to stand your ground, and after you have done everything, to stand. Stand firm then, with the belt of truth buckled around your waist, with the breastplate of righteousness in place, and with your feet fitted with the readiness that comes from the gospel of peace. In addition to all this, take up the shield of faith, with which you can extinguish all the flaming arrows of the evil one. Take the helmet of salvation and the sword of the Spirit, which is the word of God.
And pray in the Spirit on all occasions with all kinds of prayers and requests. With this in mind, be alert and always keep on praying for all the Lord’s people.
Q

This is from  Ephesians Chapter 6

Redrop: The Armor of God Prayer

an anon in India sends his love to Q and Q+

US Military Troops Pose Next to US Flag 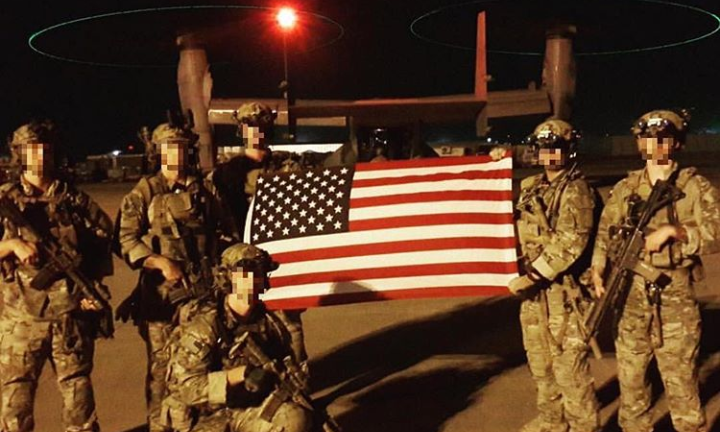