Trump and the patriots are strategically positioning individuals to move us to a sound money system. Two individuals are nominated to the Fed, setting up the possibility that one of them will become the chair of the Fed in 2022. This is all part of the patriots plan. The fake impeachment is continuing, the patriots are now showing the country what the [DS]/D’s have done, the rules and laws that they broke to get the impeachment. This is not an impeachment, it is a tribunal for the [DS]/D’s. There are many coincidences that have occurred during Trump’s defense time, the latest is the leaking of Bolton’s book. The patriots knew this was going to happen, they know the playbook of the [DS]/D’s. This is about exposing these individuals, enjoy the show.

Could We Be Heading Back Towards A Gold Standard?

“When governments manipulate exchange rates to affect currency markets, they undermine the honest efforts of countries that wish to compete fairly in the global marketplace. Supply and demand are distorted by artificial prices conveyed through contrived exchange rates. Businesses fail as legitimately earned profits become currency losses,” she wrote in a February 2017 opinion article in The Wall Street Journal.

“Forget hawks and doves – this job needs a woodpecker, someone who’ll hammer away at the importance of stable money. The goal: not a strong dollar or a weak dollar, but a dependable dollar,” she wrote in an October 2017 opinion piece in the Journal.

“The Fed should focus on stable money as a key factor in economic performance. Given that central banks today are the world’s biggest currency manipulators, it’s imperative that the next chairman prioritize the integrity of the dollar.”

Secondly, President Trump understands the gold market and its importance of it being a stabilizer in turbulent economic times.

“Remember the golden rule of negotiating: ‘He who has the gold makes the rules.’” – Midas Touch

You can’t make this stuff up folks.

Here’s Nancy Pelosi just 2 weeks ago saying that if Senate Republicans don’t call impeachment witnesses they will “pay a price.” 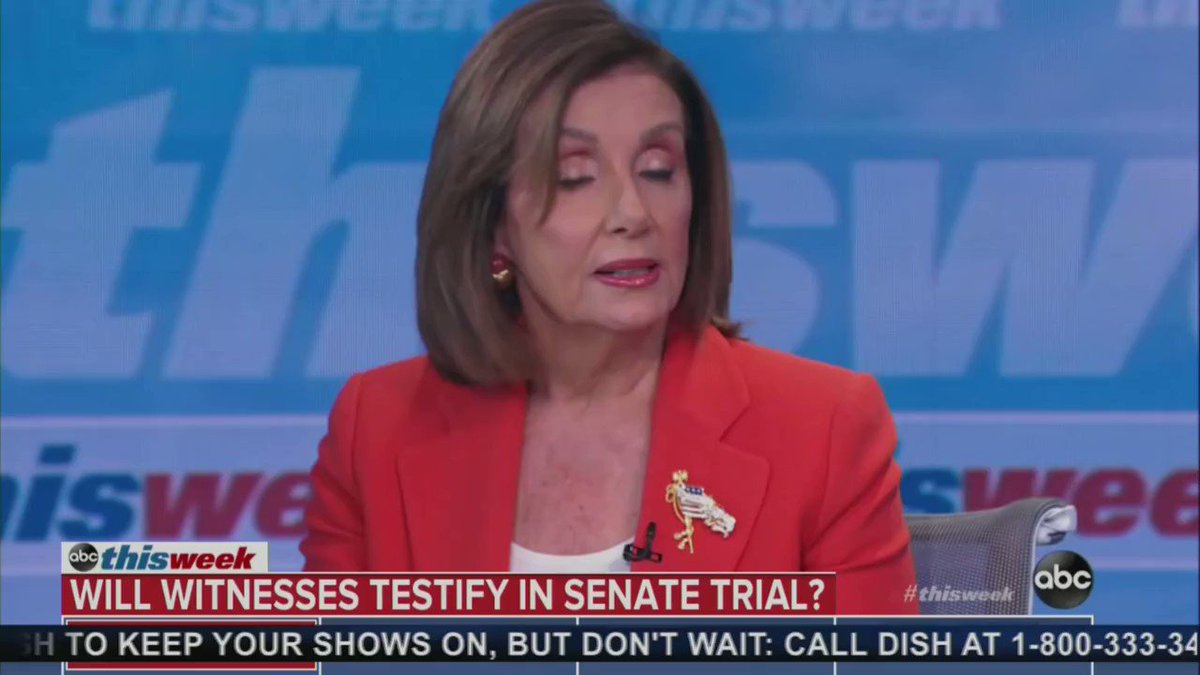 Rep. Schiff tells @MeetThePress that he thinks President Trump’s tweet this morning asserting that Schiff will pay a “price” for his role in the impeachment effort “is intended to be” a threat. https://nbcnews.to/36uzHZ8

6. And now Bolton’s book was leaked

I NEVER told John Bolton that the aid to Ukraine was tied to investigations into Democrats, including the Bidens. In fact, he never complained about this at the time of his very public termination. If John Bolton said this, it was only to sell a book. With that being said, the…

…(Democrats said I never met) and released the military aid to Ukraine without any conditions or investigations – and far ahead of schedule. I also allowed Ukraine to purchase Javelin anti-tank missiles. My Administration has done far more than the previous Administration.

[…] Prior to joining the Trump administration, Peek served as a U.S. Army intelligence officer who worked under General John Allen in Afghanistan.

[…] He was also a national security adviser to Senator Gordon Smith, an Oregon Republican, and Senator Mike Johanns, a Nebraska Republican.  (link)

So most likely Peek is the guy who leaked to the NYTimes, and that means that POTUS’ team have been aware of [DS]/D’s playbook

D’s Walking Into a Trap?

What advantages might exist when you know the other sides playbook?
https://www.merriam-webster.com/dictionary/trap📁
Enjoy the show!
Q

From the beginning, I’ve said that in fairness to both parties the decision on whether or not to call witnesses should be made after both the House managers and the President’s attorneys have had the opportunity to present their cases.

I’ve always said that I was likely to vote to call witnesses, just as I did in the 1999 Clinton trial.

The reports about John Bolton’s book strengthen the case for witnesses and have prompted a number of conversations among my colleagues.

Although we won’t vote on additional witnesses in impeachment trial until Friday, House managers need to know that both sides will have same chance to identify potential witnesses to call. Obvious choices are Adam Schiff, Joe Biden and Hunter Biden for starters.

Schiff must release the IG report, without changes or tampering, which is said to be yet further exoneration of the Impeachment Hoax. He refuses to give it. Does it link him to Whistleblower? Why is he so adamant?

I love watching Democrats and their puppet media scream that “Bolton is the one who will finally bring down Trump! The walls are closing in!”

🚨FACT CHECK🚨
From the NYT’s own article, it appears that Trump was focused on the 2016 Ukrainian election interference / backing of Hillary Clinton and his grievances regarding Ambassador Yovanovitch… NOT THE BIDENS. https://t.co/LHmLOciPNa pic.twitter.com/gVJD46tT8c

Kris: “I will be happy to cut or modify” the op-ed at your request. pic.twitter.com/s1bAX4ira8 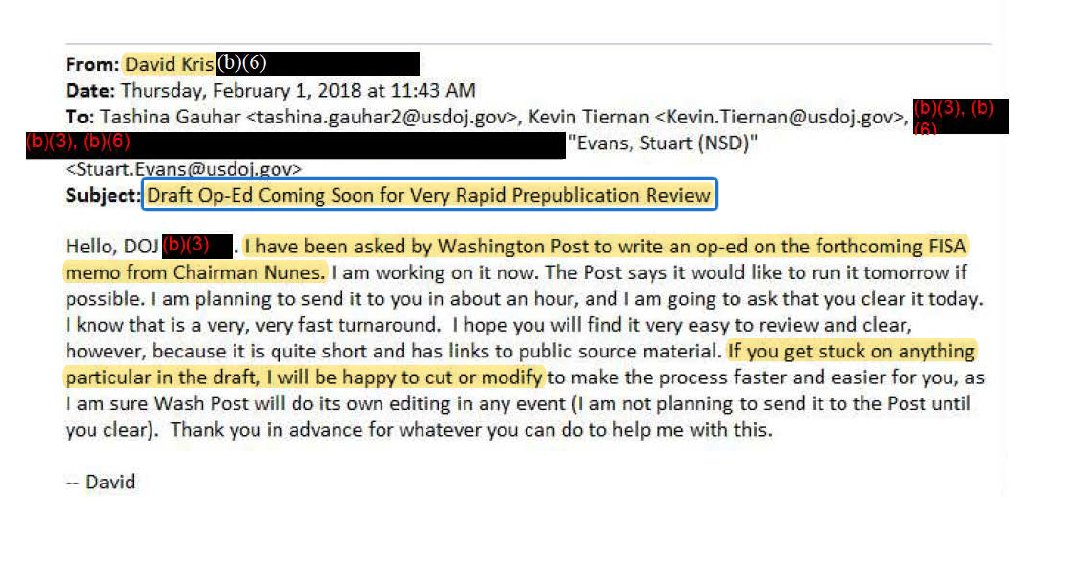 Note that FISC appointed Kris – and Kris alone – to review FBI/DOJ efforts to fix their own FISA abuses.

He was a national security adviser to the 2008 and 2016 Hillary Clinton presidential campaigns. pic.twitter.com/sKKtMP7s4g 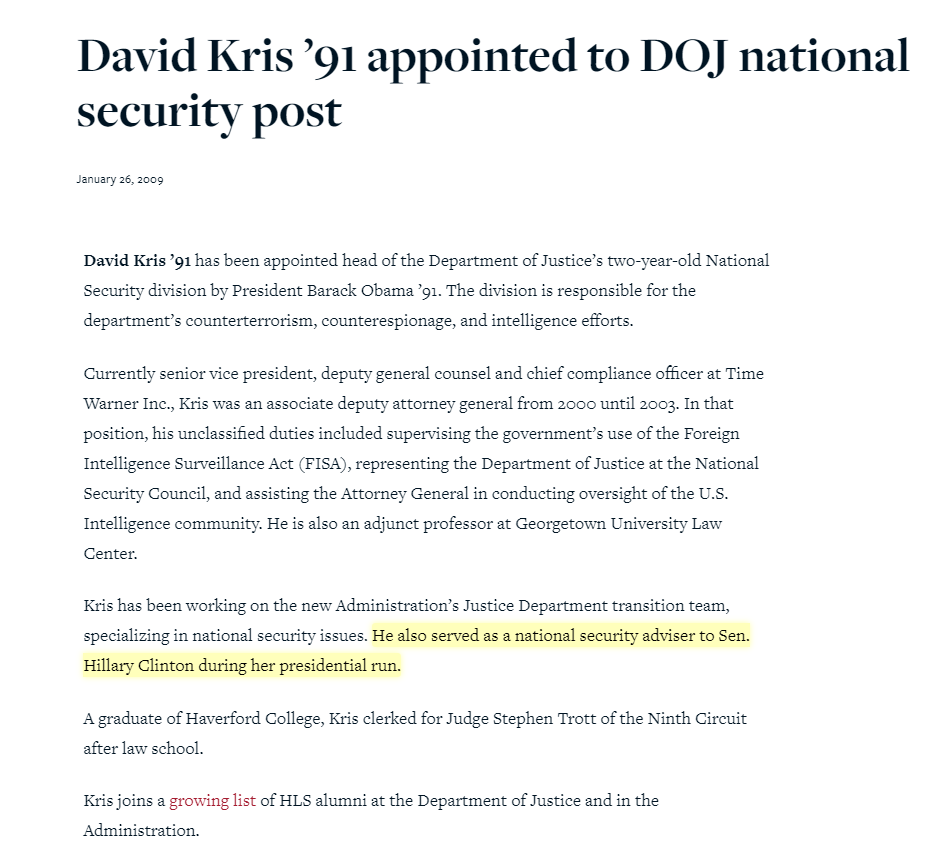 We are in very close communication with China concerning the virus. Very few cases reported in USA, but strongly on watch. We have offered China and President Xi any help that is necessary. Our experts are extraordinary!

Another company creating a coronavirus vax.

They received a $9M grant from the Coalition for Epidemic Preparedness Innovations, and you’ve got the CDC, FDA, Gates Foundation, and WHO connected all over to this group – https://t.co/oqPweqR3zx

Ken Starr: “we’re in a tribunal”#SenateImpeachmentTrial