Business are now seeing the inflation, they know this is going to effect their business. When people start to see higher prices it means more currency is taken out of their pockets and as this happens it makes much more difficult to live. The [CB] cannot stop this so they will need to distract from it. The [DS] did not see the plan for 2016 and they thought they got away with cheating in the 2020 election. Trump confirms the [DS] will be surprised once again. The people of the US are now rejecting Biden and the [DS] agenda, more and more people are siding with Trump. In the end the election fraud will be released, the [DS] will react and try to stop the information from being released, this will fail. The country will be in a constitutional crisis and the military who already knows that [JB] is not the real President, they will step in keep the country running. Ep 2535b – We Got Them In The 2016 Election By Surprise, They Said It Would Never Happen Again Cleveland Indians Changed Their Name To the Guardians

Can anybody believe that the Cleveland Indians, a storied and cherished baseball franchise since taking the name in 1915, are changing their name to the Guardians? Such a disgrace, and I guarantee that the people who are most angry about it are the many Indians of our Country. Wouldn’t it be an honor to have a team named the Cleveland Indians, and wouldn’t it be disrespectful to rip that name and logo off of those jerseys?  The people of Cleveland cannot be thrilled and I, as a FORMER baseball fan, cannot believe things such as this are happening. A small group of people, with absolutely crazy ideas and policies, is forcing these changes to destroy our culture and heritage. At some point, the people will not take it anymore!

What are they so afraid of, that when the children do not wear masks it is shown to the world that the children and teachers are not dropping dead. Will they try to push propaganda that covid is spreading, of course, but we no masks do not work and the the pcr test doesn’t work, we will be discussing the test in a little bit 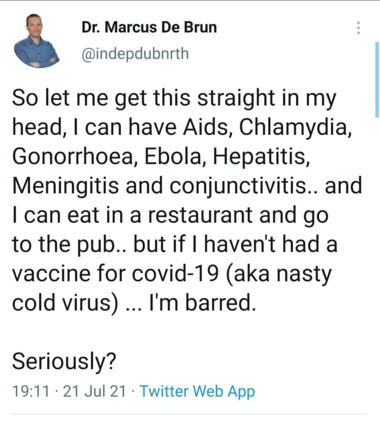 1. Experts compiled three datasets with officials from the states of Massachusetts, New York and Nevada that conclude:“Up to 90% of the people who tested positive did not carry a virus.”

3. An appeals court in Portugal has ruled that the PCR process is not a reliable test for Sars-Cov-2, and therefore any enforced quarantine based on those test results is unlawful.

4. A new study from the Infectious Diseases Society of America, found that at 25 cycles of amplification, 70% of PCR test “positives” are not “cases” since the virus cannot be cultured, it’s dead. And by 35: 97% of the positives are non-clinical.

5. PCR is not testing for disease, it’s testing for a specific RNA pattern and this is the key pivot. When you crank it up to 25, 70% of the positive results are not really “positives” in any clinical sense, since it cannot make you or anyone else sick

this clearly explains the disappearance of the “flu” during this season as the plethora of high Ct PCR Tests supposedly pointing to a surge in COVID are nothing of the sort.

This is what they are afraid of, the people waking up and seeing that they have been lied to. Think about the push for vaccines, if half the people do not get and we don’t see death all around us, what happens.  Think about Texas and Florida when they opened the states and there were no mask mandates, Fauci said it was going to be a disaster, was it, no,

75+ MILLION PISSED OFF PATRIOTS. Still no riots, looting or burning our cities.