The economy is improving, the [DS]/[CB] players are doing everything they can to stop this, but it can’t be stopped. Trump is now burying the [CB] with everything, it will be a total disaster in the end, watch happens next. The [DS]/MSM are now showing their true colors, they are no longer hiding in the shadows, the are censoring where everyone can see. The patriots are releasing everything they have on Hunter Biden, they are showing the public the truth and the [DS] is doing everything in their power to stop it. This will not work, sometimes you must show the people the truth, the FCC is now taking aim, tick tock.

President @realDonaldTrump: In my first three years, family income increased by $6,000 – more than FIVE times the gains in all eight years under the Obama-Biden administration pic.twitter.com/zdiK0MlNHW

The Fed Is Almost Out Of U.S. Treasuries To Buy

BREAKING: C-SPAN suspends political editor indefinitely after he admitted to lying about his Twitter account being hacked. Steve Scully claimed to have been hacked after an exchange on the social media platform with former Trump aide Anthony Scaramucci. https://t.co/ULwcTKcp1F

I was right again! Steve Scully just admitted he was lying about his Twitter being hacked. The Debate was Rigged! He was suspended from @cspan indefinitely. The Trump Campaign was not treated fairly by the “Commission”. Did I show good instincts in being the first to know?

Our communication around our actions on the @nypost article was not great. And blocking URL sharing via tweet or DM with zero context as to why we’re blocking: unacceptable. https://t.co/v55vDVVlgt

Senate Republicans vow to subpoena Twitter & Facebook over blocked Biden story@HawleyMO: “The attempt to rig an election—which is what we’re seeing here—by monopolies is unprecedented in American history.”

Your ability to spread information across the digital battlefield and bypass their control is what they fear [narrative failure] and why they are doing everything in their power to disrupt [false labeling [daily attacks], censorship, termination, gov hearings > foundation to term/censor, etc].
Keep charging, Midnight Riders!
https://www.youtube.com/watch?v=_Ci0Kgdpgsw 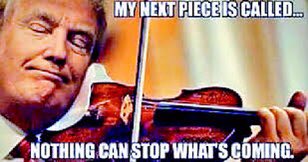 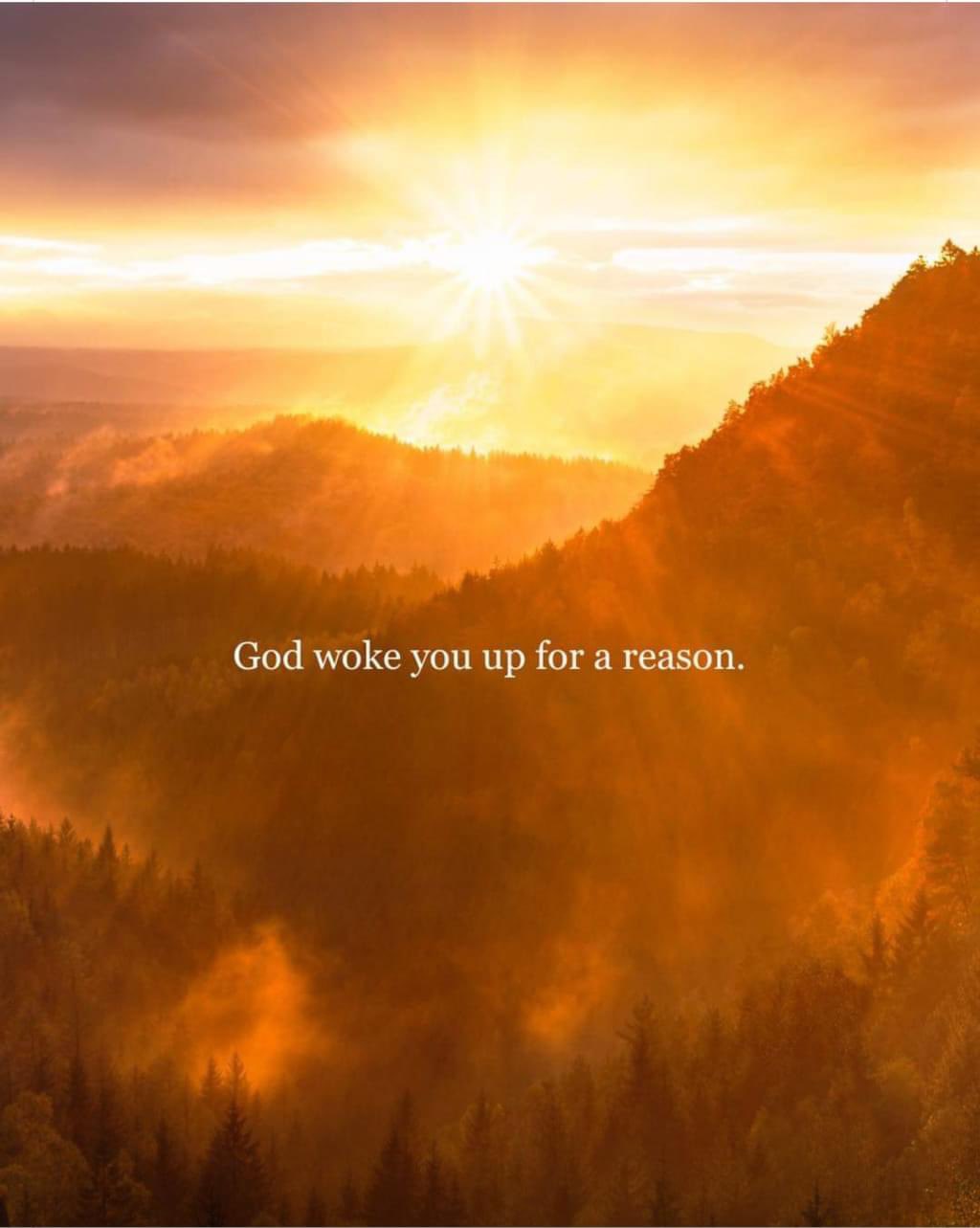 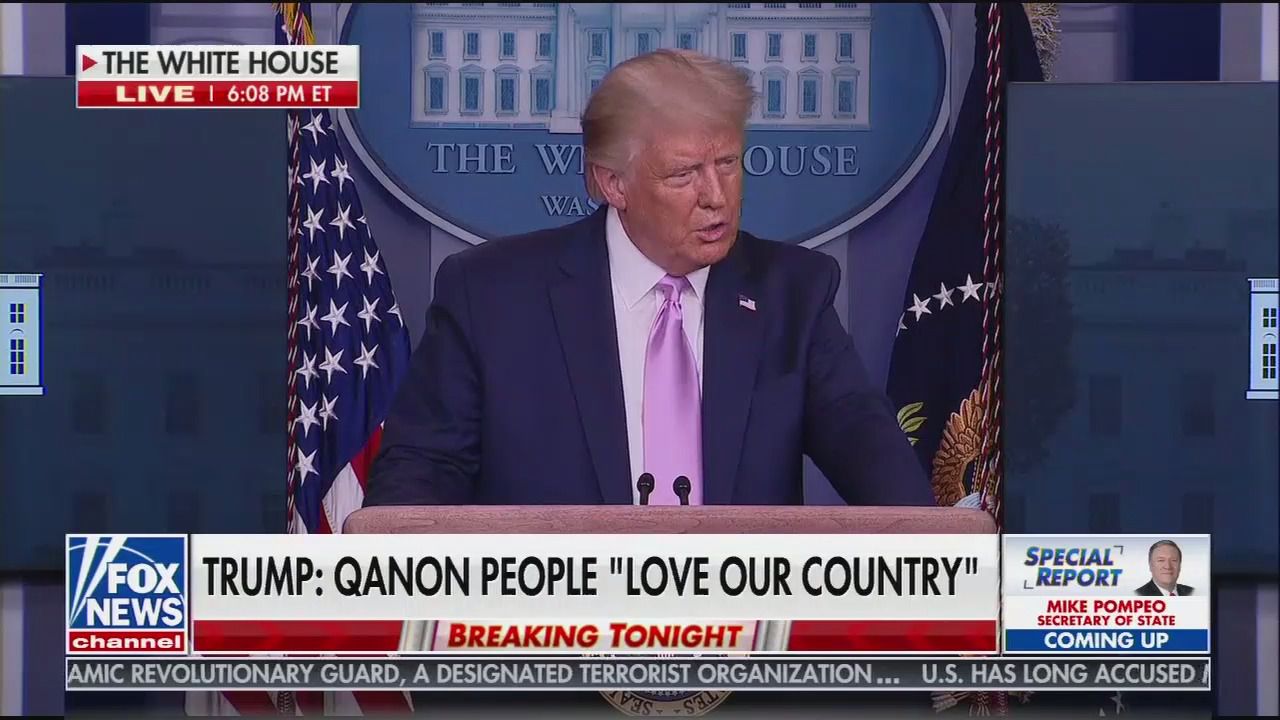 European intelligence agencies are deploying resources to track QAnon as the conspiracy theory spreads beyond the US, sources say

Europe’s domestic intelligence and law-enforcement services have apprehensively watched the QAnon conspiracy theory migrate from the US and now consider it a significant security concern.

Before more journos go peddling this
@nypost story, they should do some diligence on the cover story for how Giuliani got the “hard drive.” Giuliani has been conspiring with Russian agents for months, including someone the US says is actively trying to interfere in this election

And let’s remember, Burisma was hacked last fall by Russia.

Do not be complicit in spreading Russian efforts to interfere in the election.

The Biden Campaign claims that the reports coming out from the New York Post about Hunter Biden are not true.  Unfortunately for them, we have AI (artificial intelligence) analysis that proves that Hunter Biden is indeed the man with the crack pipe in his mouth like a baby sleeping with a pacifier.

Yaacov Apelbaum at the Illustrated Primer, a contributor at the Gateway Pundit, provided an analysis of the picture of Hunter Biden with a crack pipe to determine whether the picture was accurate.  Apelbaum used AI to determine the accuracy.

In the emails were a couple of pictures of Hunter Biden.  One picture is Hunter with a cigarette in his mouth and the other is Hunter asleep with a crack pipe in his mouth.

The pictures were compared to a known picture of Hunter Biden with his father Joe Biden.

Next Yaacov performed a battery of tests using XRVision Sentinel AI Platform (Face recognition, image reconstruction, and object classification) to determine that the pictures weren’t doctored in any way.

Based on all these tests, we know it is Hunter Biden in the pictures released by the New York Post.  Sorry left-wing media – these emails are legit.

The photo below is a screenshot of a text message from Hunter Biden to his daughter, Naomi Biden, on January 3, 2019.

This describes the amount kicked back to the Boss, Joe Biden, as happens in every organized crime group.

The Burisma Holdings executive who reportedly met with Joe Biden and his son Hunter in 2015 subsequently pitched the Obama administration’s foreign aid agency for business a year later, even as the Ukrainian gas company remained under a cloud of corruption suspicion, according to State Department memos obtained by Just the News.

The November 2016 meeting between Burisma’s Vadym Pozharskyi and USAID officials came as the Ukrainian gas firm where Hunter Biden worked as a highly compensated board member was scrambling to settle corruption allegations in Ukraine before Donald Trump became president and Joe Biden left office, according to the memos released under the Freedom of Information Act.

Pozharskyi’s contact with USAID officials was flagged in a Dec. 8, 2016 memo to U.S. Ambassador Marie Yovanovitch, then the top American diplomat in Ukraine, as she prepared herself to meet with representatives of a Democratic firm named Blue Star Strategies that was leading Burisma’s campaign to end the corruption probes in Ukraine.

Under the heading “WATCH OUT FOR,” Yovanovitch’s team recounted to the ambassador how Burisma had previously participated in a clean energy program with USAID before the embassy canceled the partnership because of the firm’s reputation for corruption.

“Subsequently, USAID spoke to Blue Star Strategies representative Sally Painter by phone and indicated that we would be open to discussing other forms of cooperation between USAID and Burisma and agreed to meet with Burisma government and public affairs representative Vadym Pozharskyi,” the memo read.

“In the November meeting, Pozharskyi briefed USAID on Burisma and the gas sector more broadly but did not propose specific ideas for cooperation,” the memo stated.

Hunter Biden pursued lucrative deals involving China’s largest private energy company — including one that he said would be “interesting for me and my family,” emails obtained by The Post show.

One email sent to Biden on May 13, 2017, with the subject line “Expectations,” included details of “remuneration packages” for six people involved in an unspecified business venture.

Biden was identified as “Chair / Vice Chair depending on agreement with CEFC,” an apparent reference to the former Shanghai-based conglomerate CEFC China Energy Co.

His pay was pegged at “850” and the email also noted that “Hunter has some office expectations he will elaborate.”

In addition, the email outlined a “provisional agreement” under which 80 percent of the “equity,” or shares in the new company, would be split equally among four people whose initials correspond to the sender and three recipients, with “H” apparently referring to Biden.

Neither Jim nor the “big guy” was identified further.

Among the deluge of explosive claims tucked inside the new Senate Republican report about Hunter Biden’s business dealings is the allegation that the Democratic presidential nominee’s son has a history of paying Russian or Eastern European women linked to sex trafficking.

“Hunter Biden paid nonresident women who were nationals of Russia or other Eastern European countries and who appear to be linked to an ‘Eastern European prostitution or human trafficking ring,’” read the report from the Homeland Security and Governmental Affairs and Finance Committees.

The GOP report did not link Biden in any way to trafficking but suggested that he potentially paid prostitutes, presumably without knowledge, who may have stemmed from such rings.

Worth remembering.
Underage women (young girls) sexually exploited _[context for future].
Q
The most compelling piece of this Hunter Biden story is that he was actually dumb enough to drop off 3 of his laptops for repair and then never returned back for them… in 2019…as his father ran for office, boldly lying to the world. This is why you don’t smoke crack, kid

BREAKING: The Mac Shop manager in Wilmington, Del., who blew the whistle on alleged Hunter Biden laptop says he tipped off the FBI and the Senate for his own protection out of fear “the Biden family” would threaten him for discovering compromising photos of Hunter

NAT SEC concerns re: blackmail [gain control] of J. Biden by Russia, China and/or other foreign [or domestic] entities?

Filename: 90862f5671d8c7d5c0bb8b96b0f69b7f7b82eb85a60531bf2b93a6935448fc25.jpgImage Name: EkYXV_wVcAAck2O.jpg
Anons were warned years ago of pending ‘China [communist] style’ tactic approaching re: censor and terminate any/all dissenting views.
They are not in control of their own platform(s).
EVERY ASSET DEPLOYED.
You didn’t think it was just a conspiracy did you?
Q

Would you like to send anything else on over during the House Intel Committee hearing?
Nothing can stop this.
Q

https://twitter.com/BrandyZadrozny/status/1316755720029822977
BREAKING: From me and@oneunderscore__
YouTube bans QAnon, Pizzagate, and other conspiracy content that targets individuals.
YouTube said it would be enforcing the updated policy immediately, and plans to “ramp up in the weeks to come.”

YouTube said Thursday that it would no longer allow content that targets individuals and groups with conspiracy theories, specifically QAnon and its antecedent, “pizzagate.”

“Today, we are taking another step in our efforts to curb hate and harassment by removing more conspiracy theory content used to justify real-world violence,” the company announced on its blog.

The new rules, an expansion of YouTube’s existing hate and harassment policies, will prohibit content that “threatens or harrasses someone by suggesting they are complicit in one of these harmful conspiracies, such as QAnon or Pizzagate,” the post read.

YouTube said it would be enforcing the updated policy immediately and plans to “ramp up in the weeks to come.”

Judging by the censorship lengths they’re going to with this Hunter/Ukraine report, you can bet your ass they’ll try to shut the entire web down with Hillary/Haiti.

It is 2:30 on Kayleigh’s clock yesterday and Twitter and Facebook censoring happens. POTUS puts this out and so do a lot of Republican Congressmen. I truly believe we are watching a movie. What are your thoughts? #Repeal230 pic.twitter.com/kSn54RIpRG

If Big Tech persists, in coordination with the mainstream media, we must immediately strip them of their Section 230 protections. When government granted these protections, they created a monster!pic.twitter.com/velyvYTOR0

I intend to move forward with an @FCC rulemaking to clarify the meaning of #Section230.

Read my full statement below. pic.twitter.com/LhUz5XMdSC 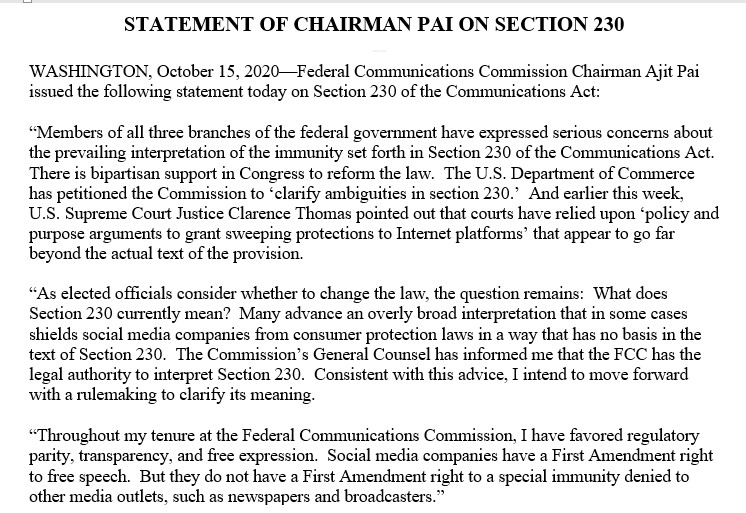 the @FCC has the legal authority to interpret #Section230. We now intend to move forward with a rulemaking to clarify its meaning.

The FCC has the authority to interpret the protections of Section 230. If they remove protection from litigation, it’s game on.