The patriots knew the playbook, they knew how to prepare. The patriots staged the economy to get everything they needed to move forward, this was done at an accelerated rate. The entire world has now been shown why globalism is not good. Trump has set the stage for the economy to take off, timing is everything. The patriots are in complete control of this operation. The [DS] players are struggling to keep this event alive long enough but everything they have tried is failing. Trump, Flynn are now sending out messages letting us know that something is about to happen, is it the storm, is it something else, whatever it is, it is coming. Panic is in the air, the sky is turning yellow, the booms are coming.

While coronavirus reigns, Trump can’t jump-start the economy by himself https://t.co/iaN7I8Vet3 pic.twitter.com/3hcOSXuURI

Trump is counting on the boom, the Fed lowered rates to 0-25bps, is pushing stimulus like there is no tomorrow, they are absorbing the toxic crap just like they did in 2008, what will happen next

The third quarter is going to look great, right before the elections, Trump is going to show the world how he can bring back an economy that was about to collapse

Trump and the patriots used this crisis to accelerate the transition

We should never be reliant on a foreign country for the means of our own survival. I think we’ve learned a lot. This crisis has underscored just how critical it is to have strong borders and a robust manufacturing sector. For three years, we’ve embarked on a great national project to secure our immigration system and bring back our manufacturing jobs. We’ve brought back many jobs, record numbers of jobs, and this really shows, this experience shows how important borders are. Prince Charles from Great Britain tested positive for the coronavirus.
The Prince is 71. I thought the Deep State #FakeNews fabricated those stories about Chloroquine overdosing just to scare people from taking it, but it looks like they intend using these fake reports to ban the drug and prevent people from getting well! #ThesePeopleAreSick!!

Please do not take medical advice from a man who looked directly at a solar eclipse.

Today, I signed an emergency regulation limiting the prescription & issuance of two drugs that have unproven results with treating COVID-19. While these drugs serve necessary medical purposes, this regulation protects the Nevadans who need them and prevents unnecessary hoarding. pic.twitter.com/dGMDJfdNAW

We have secured 70,000 hydrocloroquin; 10,000 zithromax from the federal government. I want to thank the FDA for moving very expeditiously to get us this supply.

The President ordered the FDA to move and the FDA moved. We’re going to get the supply and the trial will start this Tuesday. The President is optimistic about these drugs and we are all optimistic that it could work.

Here it is (deaths per million in population): pic.twitter.com/QEy5Z7j07Y 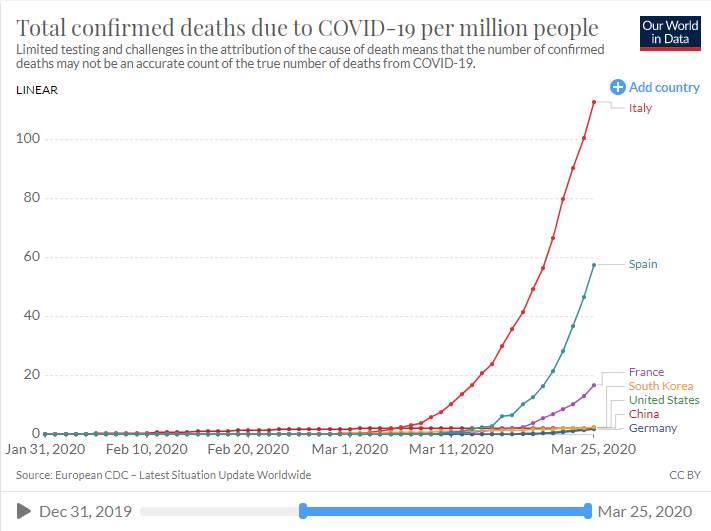 Trump was giving an interview and he said he would like APril 12, Sunday, which is easter, he would like the US open, its a perfect time line, then he mentions the countdown and the number 7 and 9 take a listen

Wow! Great catch @meggersxo129 ! I thought it was interesting when POTUS explained yesterday why he wanted to open everything back up by Easter! Assumed it was #Storm related.https://t.co/IoyoWXr6zi

Think the young lady the rescued

Trump: ‘Suicides By The Thousands’ If U.S. Coronavirus Shutdown Goes On Too Long

Why Does the Sky Turn Yellow Before a Storm?

Scientists’ best theory for why the sky sometimes changes to a yellow or greenish hue before a severe storm is that storm clouds of a certain thickness and water concentration act as a filter for the light that passes through them, according to The Guardian. Green and yellow clouds were long considered to be an optical illusion rather than a true color change.