The BREXIT is not going the way the [CB] want, project fear is not working, it is being debunked, the [CB] is losing the battle, soon the world will know and understand how bad the [CB] is for the people, the economy and the world. The debt is increasing in the US, this is on purpose the patriots are going to push the [CB] to the edge and then it will implode on itself. The MSM/DS/CB are hoping Trump removed Powell, this is not going to happen. The [DS] fake impeachment is now going to be exposed, the whistleblower is going to exposed and the people will see that it was setup, this is all part of the plan. 8chan is now 8kun and it is back, Q is posting again, get ready because after 93 days of darkness it is time to return.

Mark Carney said the City is ready for a no-deal. We’ve not lost jobs, we are ready to go… Now they are clinging to ‘you won’t be able to buy lettuces for a few weeks’ as their last hope for Project Fear. Well, Project Fear is dead and we’re ready to trade without the shackles of the European Union.

Total US Debt Surpasses $23 Trillion For The First Time

Putting this increase in context: since Nov 8, 2016, when Donald Trump was elected US president, and when US debt was $19.8 trillion, the federal debt has increased by $3.2 trillion

The Third Wave Of Globalization Has Ended

The MSM continually pushes the fake news narrative, everytime they do this they expose themselves to the American people, they keep digging the their hole deeper and deeper, look at what happen when Trump visited the UFC in Madison square garden, the MSM reported that he got booed when he entered the stadium but from those who were there tell a different story, Tara La Rosa tweeted out the following, take a listen to crowd

Thanks for speaking the truth @TaraLaRosa. The rest of blue checkmark twitter is #fakenews-ing the hellnout if that awesome welcome. https://t.co/aQyfXZZ1mX

Here another individual sitting in the upper seats, take a listen

The patriots are now controlling where they want the DS to go, the DS the dems believe they are controlling the situation with the fake impeachment but this done on purpose, when it is all exposed the DS/Dems will realize they are in trouble and they don’t have a way out of this, we will be talking about this a little later in this report but first, Trump decided to leave NY and move to Florida, Cuomo and DeBlasio are cracking jokes saying we don’t want Trump in NY anyway, but lets look at the situation in NY Now what is very interesting, remember when the MSM, politicians said that the DS is a conspiracy, now the former CIA dir is saying thank god the DS is trying to impeach Trump, acknowledging that there is a DS. Take a listen

The Trump administration are not going along with the fake impeachment,

Mulvaney aide will not testify on Monday, lawyer says

Thomas Massie Tweeted out the following

I’ve attended several hours of the secret depositions as a member of @GOPoversight cmte.

Unfortunately, most of my colleagues and all of the media must rely on leaks to form their opinions.

I’m urging @SpeakerPelosi to release the transcripts of the depositions immediately. pic.twitter.com/jD2sSGdv5F

The GOP oversight committee tweeted out the following

82 Days since @RepAdamSchiff learned the identity of the whistleblower  pic.twitter.com/AKE4Jtb1dj 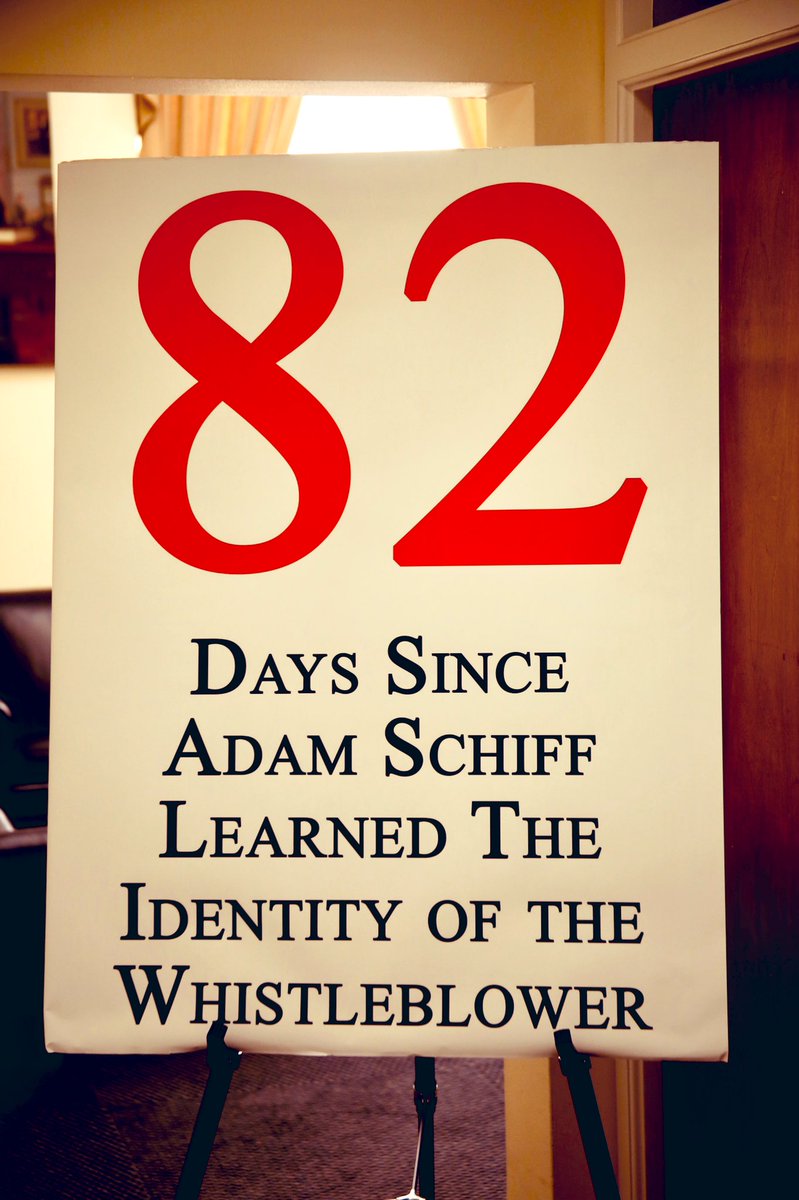 Didn’t he pick the Whistleblower? https://t.co/yalRJr8DgA They mention Eric many times in their texts – Many people listened to my phone call with the Ukrainian President while it was being made. I never heard any complaints. The reason is that it was totally appropriate, I say perfect. Republicans have never been more unified, and my Republican Approval Rating is now 95%!

The Fake News Media is working hard so that information about the Whistleblower’s identity, which may be very bad for them and their Democrat partners, never reaches the Public.

The Whistleblower got it sooo wrong that HE must come forward. The Fake News Media knows who he is but, being an arm of the Democrat Party, don’t want to reveal him because there would be hell to pay.
Reveal the Whistleblower and end the Impeachment Hoax!

Trump was talking to

Now the Flynn case is not going well for the DS,

In contrast, Special Agent Joe Pientka, who was with Peter Strzok in the Flynn ambush interview took notes that look like they were taken in real time (shorthand, messy):

Now out in CA, and Q has told us to watch CA,Gov Newsom has done a terrible job with forest management, Trump tweeted out the following

The Governor of California, @GavinNewsom, has done a terrible job of forest management. I told him from the first day we met that he must “clean” his forest floors regardless of what his bosses, the environmentalists, DEMAND of him. Must also do burns and cut fire stoppers…..

..Every year, as the fire’s rage & California burns, it is the same thing-and then he comes to the Federal Government for $$$ help. No more. Get your act together Governor. You don’t see close to the level of burn in other states…But our teams are working well together in…..

….putting these massive, and many, fires out. Great firefighters! Also, open up the ridiculously closed water lanes coming down from the North. Don’t pour it out into the Pacific Ocean. Should be done immediately. California desperately needs water, and you can have it now!

The trucks were loaded with U.S. armored vehicles, min-clearing vehicles and other military equipment. 8chan now 8kun is back online, there is a lot of traffic and to access the boards you need to use a tor browser for now, this will change, but it seems Q is posting again,

Now there were other posts but these were security posts, Q normally does this to check everything, but Q did post something very interesting, first Q posted

Video of American Flag Waving in the Wind