Trump and the patriots are now ready to turn the global economy, the globalists are ready to be pushed out, Trump is ready to make a huge trade deal with the UK once it leaves the EU. This US economy is booming statistically, Trump and the patriots needed to push the economy to the extreme, they now have control of the narrative. Gold and the stock market is up, people are feeling good. The [DS] is now trapped in their impeachment plan, it will start to blow up all around them and they will not be able to stop it. The world is watching. The [DS] is now panicking over the whistleblower identity because once it is revealed it is game over and the entire plan is exposed. Propaganda cannot win against the truth and facts and the [DS] is pushing their agenda using propaganda which will fail in the end, just like the Mueller investigation. In this new world controlled by the patriots only truth will win. There is no place to hide or run.

Tired of winning yet? 👍 🇺🇸

Wow, a blowout JOBS number just out, adjusted for revisions and the General Motors strike, 303,000. This is far greater than expectations. USA ROCKS!

The [DS] Ukraine/Whistleblower impeachment push is falling apart on the [DS], how do we know this, secret hearings, only the dems voted for the house impeachment resolution, except 2, the lawyer for the whistleblower put out a statement that if anyone mentions the name of the whistleblower they will be held liable if anything happens, they are panicking because if the identity is revealed and we believe we know who it is the entire Ukraine/Impeachment  push goes out the window, panic has set in, we will be talking about this a little later in the report, but first yesterday we talked about how HRC is preparing to run once Trump is hurt enough or is impeached and Big tech is behind her on this, but Facebook doesn’t seem to onboard with this, but of course we will have to see what pressure the DS puts on Zuckerberg, remember Twitter, Facebook, Google are being investigated

Nancy and Schiff have announced public hearing coming soon, why did they announce this now, why were the other held in secret.

Doug Collins tweeted out the following

Fact: Pelosi’s inquiry is officially the first presidential impeachment inquiry in modern history authorized by members of only one party.

Doug Collins Glove Slaps Adam Schiff: Testify About Your Involvement With The Whistleblower

“Adam Schiff has taken all of the power for himself. That is very unfair. There were dozens of people on this call, yesterdays witness knew that and had no problems (nor did any of them). Facts matter, and that’s why this is not about Impeachment.” Guy Lewis, former prosecutor…

….@FoxNews @BillHemmer The public is watching and seeing for themselves how unfair this process is. Corrupt politicians, Pelosi and Schiff, are trying to take down the Republican Party. It will never happen, we will take back the House!

Remember the world is watching, this about exposing the [DS] players, the people are realizing what is going on, as they see this move forward its going to get worse for them, this will backfire on all of them, why

Dems panicking that Bidens have been caught in four decade pay for play. If pursued it will extend high and wide. That’s why they are doing phony impeachment and trying to have me investigated and disbarred. I’ve got the evidence. Who has the guts to pursue big Dem crooks.

Pelosi and Schiff massive attack on our constitution is worse than anything since Senator Joseph R. McCarthy. Every substantive right trampled. An innocent conversation falsified. @realDonaldTrump did nothing wrong. The crimes will be the frame-up.

And now we have the State Dept ready to release docs of Giuliani communications, be-careful what you ask for.

Feels like the [DS] is now walking right into the trap, tick tock

The [DS] is now trapped in this fake impeachment show, when the impeachment show fizzles out and it will the American people will see exactly what they have done, they created propaganda to push their own agenda, this is exactly what Trump and the patriots want to happen, this is why they want this to play out.

The [DS] are in a deep panic when it comes to the whistleblower, they are trying desperatly to keep the identity a secret, once the identity is officially released it is game over and everything they trying to do will fall apart with a snap of a finger. Lawyers for the whistleblower decided to threaten anyone who mentions the identity. 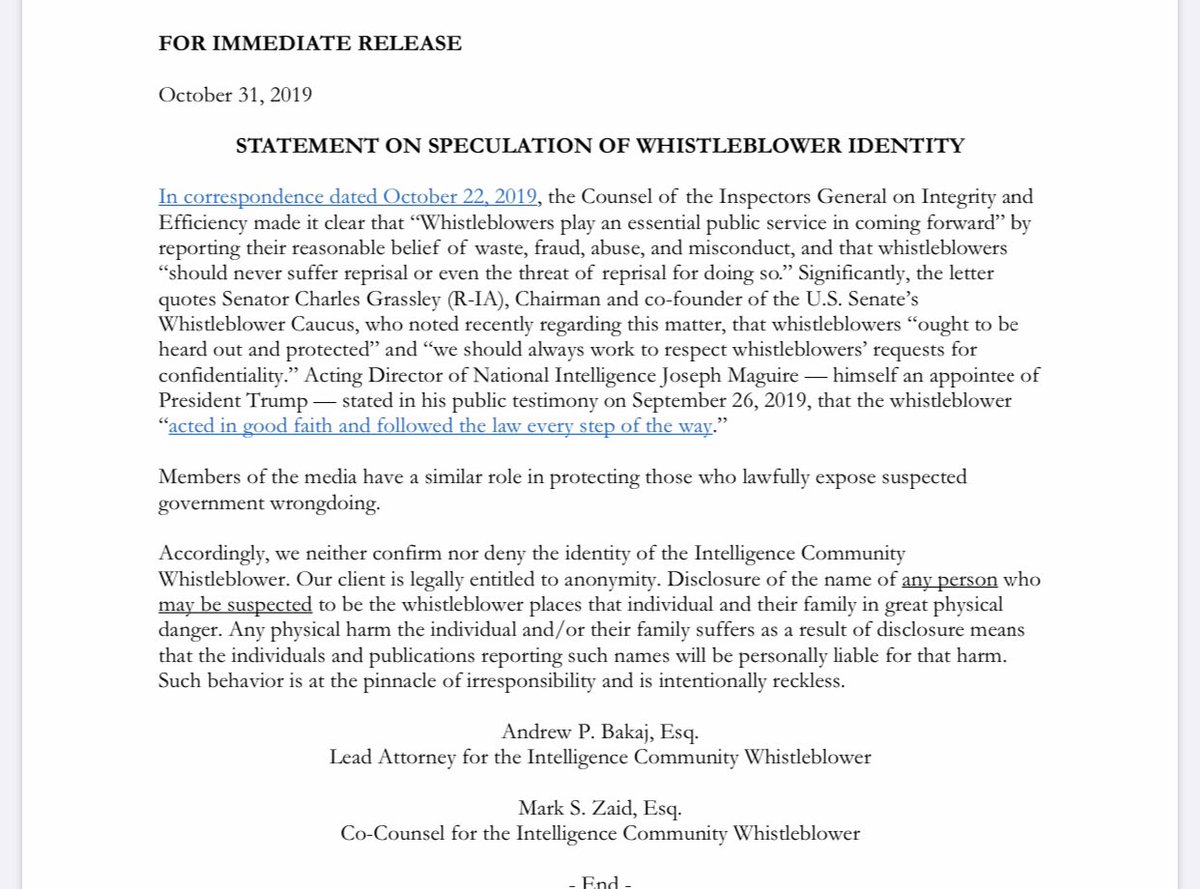 Then we have this, Dan Bongino put it all together

And now we find out that AS is backing out, the whistleblower will not testify

Trump decided to push the envelope on the Ukrainian, impeachment issue, he will read the phone transcript to the American people

UPDATE: Lindsey Graham Announces He Will Give Up Senate Judiciary Chair in 2020

ISIS has a new leader. We know exactly who he is!

1600 Pennsylvania Avenue, the White House, is the place I have come to love and will stay for, hopefully, another 5 years as we MAKE AMERICA GREAT AGAIN, but my family and I will be making Palm Beach, Florida, our Permanent Residence. I cherish New York, and the people of…..

….New York, and always will, but unfortunately, despite the fact that I pay millions of dollars in city, state and local taxes each year, I have been treated very badly by the political leaders of both the city and state. Few have been treated worse. I hated having to make….

….this decision, but in the end it will be best for all concerned. As President, I will always be there to help New York and the great people of New York. It will always have a special place in my heart!

2 thoughts on “[DS] Panicking Over The Whistleblower Identity, The World Is Watching – Episode 2010”