The [DS]/[CB]/MSM begin pushing the reset narrative. They are now blaming the pandemic, the [CB] needs to do more before the system implodes. They have fallen right into the trap, as their system implodes the US will be doing the opposite. Sometimes you must show the people to make them understand. The [DS]/MSM are now panicking, they pushing to confirm [JB] cabinet, they know that this is not going to end well. The deep dark world is being exposed, once the public knows all protections are  removed. The evidence is now being brought out into the light and the people are starting realize that there is something wrong with the election results. Messages sent and received. Tick tock, time is ticking down. Ep 2341b – A Deep Dark World Is Being Exposed, Public Awareness Kills All Protections “In the midst of this once-in-a-century crisis, it’s imperative the next administration can count on the Senate to confirm its cabinet without delay” pic.twitter.com/ZcFJXbwKSa

But apparently the achievements of GOP women don’t count in the eyes of the media… pic.twitter.com/Q3zWoxgF3j

Sidney Powell @SidneyPowell1 & I won, then lost, but ended up winning. We will never give up the pursuit of TRUTH to achieve justice.@realDonaldTrump@KrakenWood @GenFlynn #FightLikeAFlynn#FightBackhttps://t.co/mV6SGVLsv9

Gov. Kemp is no stranger to *wiping servers clean.*

In 2017, Kemp was caught in a scandal over a server “quietly wiped clean” just after a suit was filed.

Today, a judge issued an order to halt a “software update.” It was reversed. Voters’ blood should be boiling.👇 pic.twitter.com/G8aorxZlRh 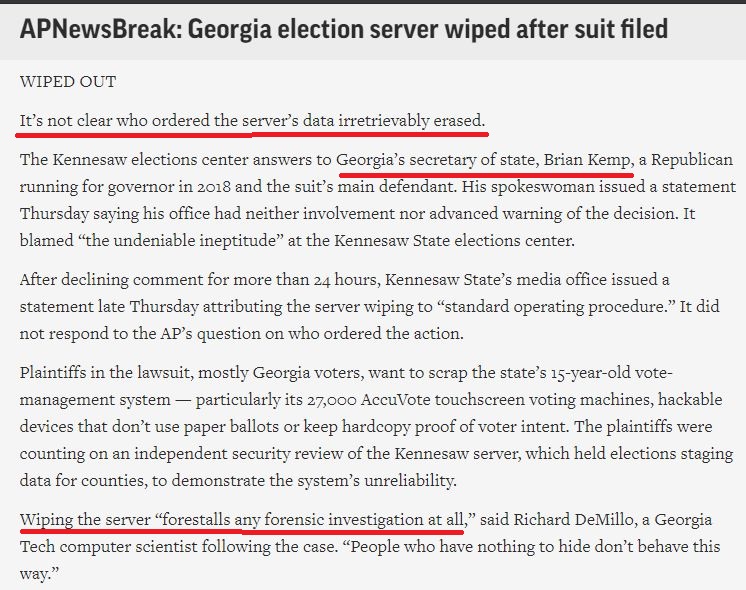 The GA judge has rendered another order stopping the “wiping clean” of servers. Transparency is all “We The People” want. Why would any God-fearing American not seek the truth about this disaster of a Presidential election?@KrakenWood @SidneyPowell1 @RudyGiuliani @LLinWood https://t.co/fkm7OTRuUJ

People seem confused by the lawsuit filed in Georgia. It isn’t that difficult to understand when explained plainly. I want to try and do that for you here.
Important: Some judges take their oaths to execute law as written very seriously. They execute that duty with integrity.

Why won’t Governor @BrianKempGA, the hapless Governor of Georgia, use his emergency powers, which can be easily done, to overrule his obstinate Secretary of State, and do a match of signatures on envelopes. It will be a “goldmine” of fraud, and we will easily WIN the state….

“Democrats suffered crushing down-ballot loss across America.” @nytimes. This is true. All statehouses won, and in Washington we did great. So I led this great charge, and I’m the only one that lost? No, it doesn’t work that way. This was a massive fraud, a RIGGED ELECTION!

Down ballot results present like a typical incumbent re-election cycle.

His party recovers much but not all of their 1st incumbent midterm losses, largely fight off upper chamber challenges and wins bellwethers.

This is what happens when a POTUS gets re-elected, not defeated. https://t.co/8732X2S2RY

“@RandPaul wants an explanation on WHY Trump’s “defeat” happened in FOUR DATA DUMPS between 1:34 am & 6:31 am.

We all know Trump won this election.

If we don’t fight for truth here — we will FOREVER get evil by default.#FreeAndFairElectionshttps://t.co/0AbXUkZ7eb

.@60Minutes never asked us for a comment about their ridiculous, one sided story on election security, which is an international joke. Our 2020 Election, from poorly rated Dominion to a Country FLOODED with unaccounted for Mail-In ballots, was probably our least secure EVER!

RIGHT NOW: The Arizona Secretary of State’s Office certifies the results of the 2020 general election.

“The republic is at stake. This is no game for us.

“There’s a group in this state and country willing to throw away our valuable and precious freedoms.

Pennsylvania can lead the way, just like it did many years ago. Very important things happening! https://t.co/uzG29zpBAk

We have some big things happening in our various litigations on the Election Hoax. Everybody knows it was Rigged. They know Biden didn’t get more votes from the Black community than Obama, & certainly didn’t get 80,000,000 votes. Look what happened in Detroit, Philadelphia, plus!

I’m not fighting for me, I’m fighting for the 74,000,000 million people (not including the many Trump ballots that were “tossed”), a record for a sitting President, who voted for me!

I’m curious to know why the EO hasn’t been used yet. Is the president waiting for something to fall into place? 🤔 Are there things happening in the background that haven’t been revealed to the public yet?

Review the Executive Order for deadlines. Every lie will be revealed. Democrats screamed Russia for years. They have ensnared themselves. Patriots will soon know it was bad actors in China, Iran, Venezuela, Canada, Cuba, Germany, Spain, Mexico, etc.

The activist media has spent more time covering Joe Biden’s broken foot than the credible allegations of voter fraud in the 2020 election. That tells you everything you need to know about “journalism” today.

THREAD: Who else did Trump “wish well? https://t.co/EgdhXpbjfL

https://www.youtube.com/watch?v=j0uCrA7ePno
“Super-predator”
“Bring them to heel”  To force someone to obey one’s wishes or commands; to make someone act in accordance with one’s authority.
Define heel.
(of a dog) follow closely behind its owner.

6 thoughts on “A Deep Dark World Is Being Exposed, Public Awareness Kills All Protections – Ep. 2341”