Ep 2740a – The [CB] Just Revealed Their Entire Plan, Conspiracy No More, Down She Goes
The people are feeling the pain that the puppet masters are inflicting on them, 1 in 5 workers run out of money before payday, wages are not keeping with inflation. The [CB] agenda is exposed, there is no place to hide and the admit that they want to control the population, down goes the [CB]. March was a crazy month, so much was produced and the American people needed to digest it, this is just the start. April showers, the MOAB is coming and events are about to unfold. The [DS] has lost the narrative, they cannot control what is coming, no matter how they spin it. All they will be left with is to shut everything down, but the patriots are prepared for this. No escape, no deals, each step of the way they will feel pain.

1 in 5 workers runs out of money before payday, survey finds

To meet its zero-emissions goals, #LosAngeles and #LongBeach ports will start charging trucks that use #FossilFuels an extra fee April 1 to pick up or drop off shipping containers. https://t.co/Ag4FiXsL9F

A single Tesla battery weighing 1,000 pounds requires extracting and processing some 500,000 pounds of materials. At this rate, over the next thirty years we will need to mine more mineral ores than humans have extracted over the last 70,000 years. #GreenEnergy pic.twitter.com/4FXcYHlSFt

By demanding that all gas and oil exports from Russia must now be paid in Ruble it’s like saying pay us in Gold. As a result both Gold and Ruble increase in value.

Sanctioned Russian Oligarchs will see the value of their stock and Ruble holdings increase.

With time they can build 5 new super-yachts for every yacht they lost. Russia is likely to come out of this conflict stronger.

What a huge miscalculation by the US Govt and EU leaders.

At the moment it looks like Vladimir Putin is outsmarting the western leaders that played with fire in Ukraine. It may become a historic lesson for future strategists to stay away from proxy and regime change wars, especially against an enemy with a nuclear arsenal and brains.

“We are on the brink of a dramatic change where we are about to, and I’ll say this boldly, we are about to abandon the traditional system of money and accounting and introduce a new one. And the new one; the new accounting is what we call blockchain… It means digital, it means having an almost perfect record of every single transaction that happens in the economy, which will give us far greater clarity over what’s going on.”

April fool’s Day is canceled because nothing could be a bigger joke that the joke that’s running our country right now!!!

Fight with Clinton campaign and DNC looms in Sussmann case

Politico is trying to spin all of this,  Durham’s grand jury already subpoenaed this stuff and he has been using it in his indictments.

The Special Counsel’s argument on materiality was more more effective, explaining what Sussmann did and why his lies mattered:

Interestingly, the Court also asked if the underlying information – the Alfa Bank/Trump Organization data that Sussmann provided the FBI – was “false”. On that question the Special Counsel declined to show their hand.

EXCLUSIVE: Hunter Biden texted Hallie that China arrested CIA informants in ‘retaliation’ for the U.S. arresting ‘my client the chief of intelligence of the people’s republic of China’

The reason for denying a foia request can be revealing. The FBI denied my foia for documents on the condition, functionality and/or repair of the cameras directed at Jeffrey Epstein's cell. DOJ just affirmed under exemption 7(A). Open investigation?!? https://t.co/M1qzZu6ANv pic.twitter.com/rdjqc8AyvM

A source within CBP who has worked in law enforcement for 20+ years –  who is familiar with the process – who agreed to speak on the condition of anonymity tells me DHS is bracing for as many as 500,000 migrants in the six weeks following Title 42 being lifted.

CBP source says DHS is trying to figure out how to get enough medical personnel to provide the COVID vaccines the Biden administration promised migrants – as well as staff to handle any medical issues many migrants will have.

🚨This CBP source tells me that due to the wave of migrants they are expecting after Title 42 lifts – Biden Admin is looking at doing NTA’s (notices to appear) with “minimal biometric data and vetting” to expedite processing.

🚨A CBP source tells me the Biden Admin is also looking at deploying a smart app for migrants to use to submit to pre-screening. There is talk of expanding the “CBP1 App” for migrants so they can submit pre-screening prior to approaching a point-of-entry.

We won! Judge Porzio just ruled in the favor of parental choice and democracy. He found the Toddler Mask Mandate to be arbitrary, capricious and unreasonable. Effective immediately, the policy is void and unenforceable.

The mystery of the seven-hour gap has fueled furious speculation as to why calls are missing. That includes allegations that Trump was using “burner phones” (which he has denied) or that the logs were purposely suppressed. 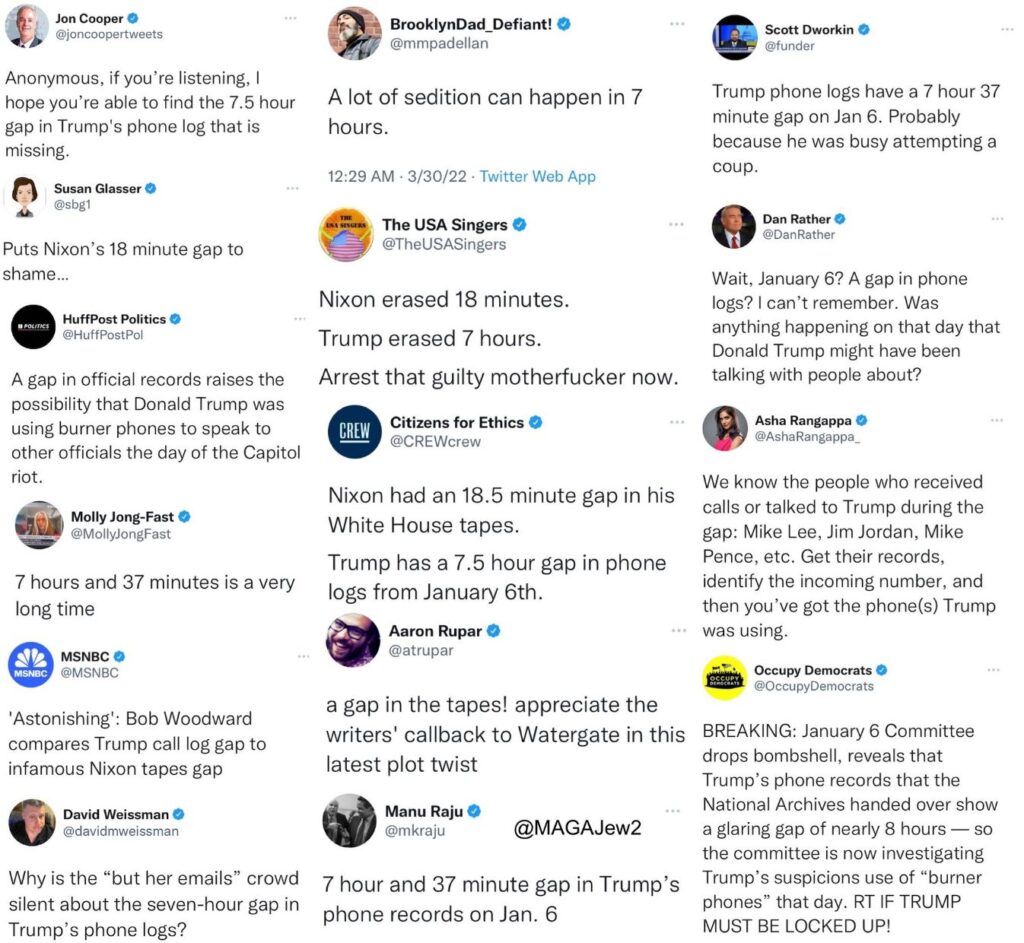 Voter Enthusiasm for Republicans in the Midterms Highest Since 2010

Welcome to the Great Awakening, Sometimes you must show the people, as the people continually see what the [DS] is doing this country the people are rallying and fighting and they will show how angry they are at the polls, nothing can stop the tsunami