Skip to content
Reports
July 20, 2020July 21, 2020 x22report
SPREAD THE WORD
The economy is starting to boom again, gold and silver are rising quickly and the ratio has begun too close.  House sales are rising at an incredible pace. Trump is getting ready to push the infrastructure build by cutting more taxes and de-regulating, Judy Shelton ready to come on board. The [DS]/MSM are panicking, their entire event is now falling apart, the people know the truth and people are not going along with their agenda. The silent majority is growing every day and arrests are coming. August is going be a hot month, the [DS] already know they lost so they are planning additional events, the patriots already know the playbook.

For the first time since September 2016, Silver futures just broke above $20…

As the gold/silver ratio reverses from its record high spike...

Mnuchin Suggests US Should Forgive “Small” PPP Loans Of $150,000 Or Less

The family that owns The New York Times were slaveholders: Goodwinc

The meltdown over federal law enforcement’s “driveby” arresting tactic is because it’s effective & uses minimal force. Antifa know this & that’s why they’re having friends in media press this point (like WaPo’s Katie Shepherd, who erased her Twitter history after getting the job) pic.twitter.com/Je4jTlsczU

Thanks to @DHSgov, they’ve been able to arrest rioters recorded committing serious crimes like assault, arson, property destruction & more. Some of the weapons found on the federal suspects here include a machete, pipe bomb, hammer & more. pic.twitter.com/Yd6xOzpNZq 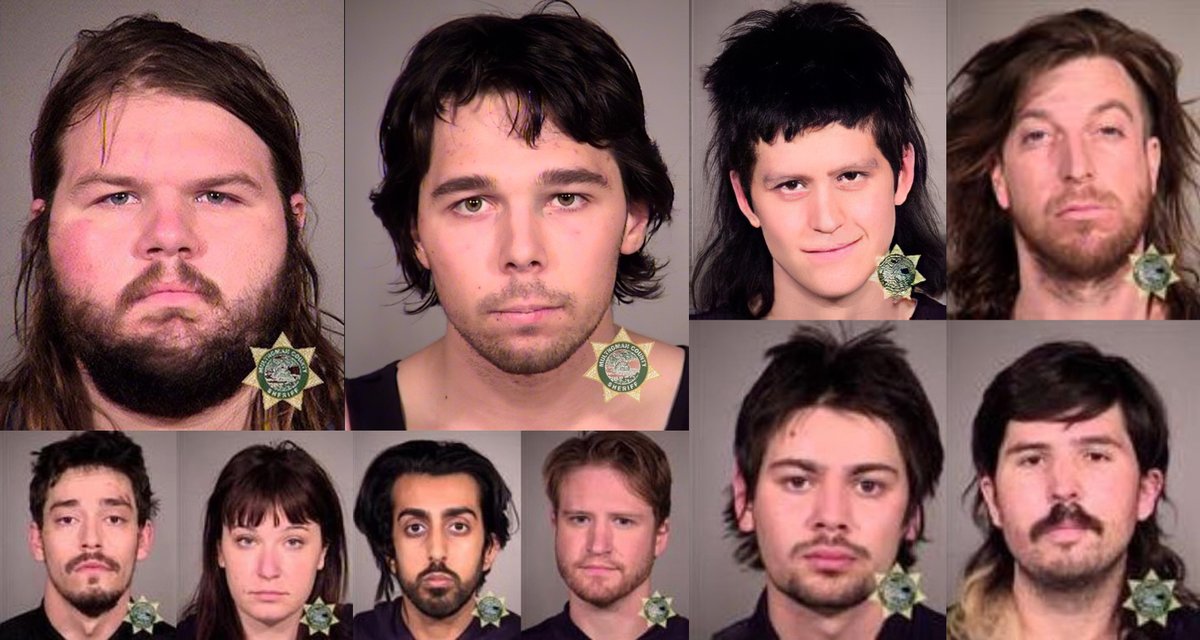 Antifa train in black bloc tactics to “de-arrest” their comrades by swarming police & pulling them out. It’s already happened this week with the local police. They can’t do that as easily w/federal law enforcement. And that’s why they want to stop them. https://t.co/tsdGpM3VcO pic.twitter.com/RTVZrrOmmk

Politicians like @SenJeffMerkley have spread the antifa lie that unmarked law enforcement is going after criminal suspects. That is false.

They ALL wear uniforms with their agency patches on their shoulders. https://t.co/NVPIQHgzk7

Black people are rising up against Black Lives Matter, realizing that the central control of the movement is lead by people trying to control and manipulate their thoughts and actions.

“We aren’t standing for black lives matter.” She says.pic.twitter.com/KvtMin3HJx

They Manipulated COVID-19 For Political Purposes and the 2020 Election 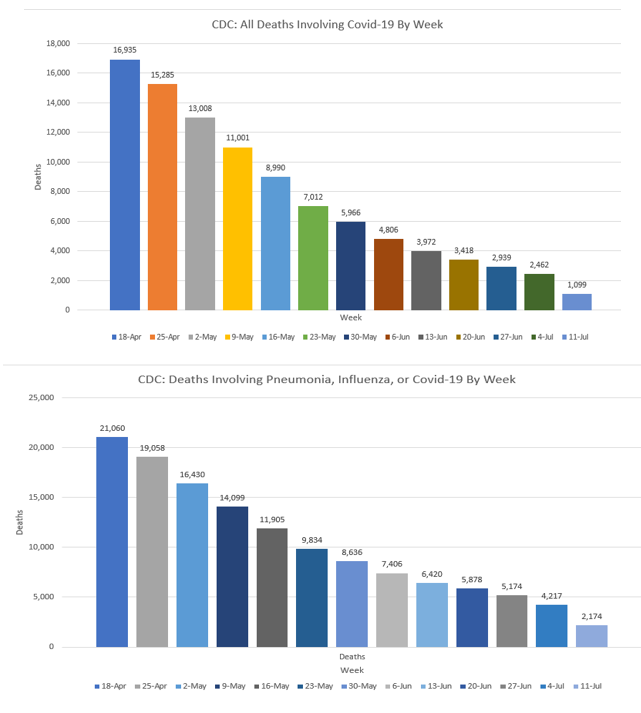 Fox 35 News ran an investigation of the figures, contacting local locations listed in the state’s report

Incomplete reporting from some Florida laboratories resulted in errors on the state’s report on virus positivity rates, according to a Fox 35 News report.

That rate implies every person tested had a positive result.

How important is FL re: 2020 election?
1 lab = possible human-error
‘Countless’ labs = deliberate [coordinated]
Largest coordinated mis[dis]information campaign ever to be pushed by controlled entities?
Who benefits the most?
Q

Do not give up the citizen investigation.
Public awareness important [bypass of controlled [approved] topics].
[General public steered by MSDNC like a dog steering sheep]
Have faith in Humanity.
Q

Ghislaine Maxwell was far worse than Jeffrey Epstein when it came to abusing young women and girls, according to their most outspoken accuser — in fact, she was “Gepetto” to his “Pinocchio.”

“She was pulling the strings,” Virginia Roberts Giuffre , she called  Maxwell the mastermind, and a “monster.”

“Ghislaine was much more conniving and smart than Epstein ever was,” Giuffre said.

“I know that woman. I’ve known her really well. Put it this way — Epstein was Pinocchio, and she was Gepetto.”

“This marks the third Spacey accuser to die in 2019.”
At what point does it become painfully obvious?
Q

“St. Joseph’s Church … was vandalized this week, as an unknown individual or individuals painted ‘satanic’ and ‘anarchist’ symbols on its doors,”

According to St. Joseph’s pastor, Rev. John Paul Walker, the church was desecrated using pink paint, including a pentagram and the symbol for anarchy.

Here’s the rundown of attacks on the Christian church over just the last two months — ten in the last month — which coincides with the lawless rioting, vandalism, and looting at the hands of the corporate media’s and Democrat Party’s Brownshirts in the left-wing Black Lives Matter and Antifa terrorist groups:

July 16: Statue of Christ decapitated inside a Florida church

July 12: Statue of Virgin Mary lit on fire in Boston

July 11: Suspect arrested after detectives “say he plowed a minivan through the front door of Queen of Peace Catholic Church in Ocala, doused the foyer with gasoline and set it on fire, causing extensive damage”

Germany: “We Are Not Alone. More and More People Awake. Where We Go One, We Go All.”

The comments came as Fox News learned this weekend that Jennifer Boone, a senior FBI official who oversaw the flawed probe into former Trump adviser Carter Page, has received a major promotion to lead a field office — and the bureau won’t say why.

https://twitter.com/AngelGotti5/status/1284664059758022661📁
The head of the FBI, Christopher Wray, has hired a new general counsel named JasonJones, who is a partner of Rod Rosenstein in the law firm King & Spalding, which also employs Sally Yates
#FBI #DeepState
THE SWAMP RUNS DEEP.
v2_change we can believe in
Q
In July of 2019, an anon suspected Chris Wray was secretly working for the deep state as a “sleeper.” Q’s response seemed to confirm his suspicion. After deep state sympathizers are removed, version 2 (v2) of the Trump administration should run more efficiently.

>>10010940
Important to fully digest and understand.
Follow for days ahead [DECLAS].
[note the pen]
You have more than you know.
Q

In his December report, IG Horowitz wrote the dossier’s source made statements “inconsistent…

w/multiple sections of the Steele reports, including some that were relied upon in the FISA applications” Then just before final FISA June 2017, FBI lawyer apparently blew through another stop sign when he “altered an email” to omit “Page’s prior relationship” w/US intel agency.
Revealing that relationship would have likely gone a long way to explain Page’s Russia contacts. IG Horowitz found dossier “played a central + essential role” in FBI decision to surveil Page. At what level + who made call to blow through these warnings? RE-READ Horowitz Xi+ Vi. 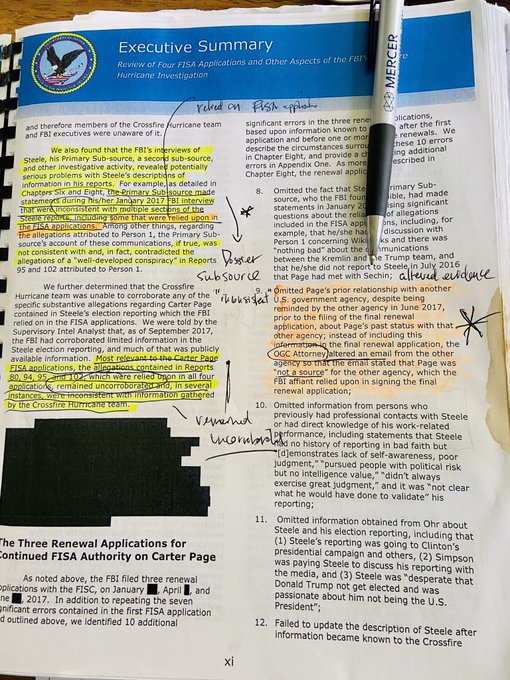 Q reposted a link to today’s thread by Catherine Herridge on problems with the FBI’s surveillance of Carter Page. I suspect this thread is being highlighted again to bring more “sunlight” to the matter. Light dispels darkness. 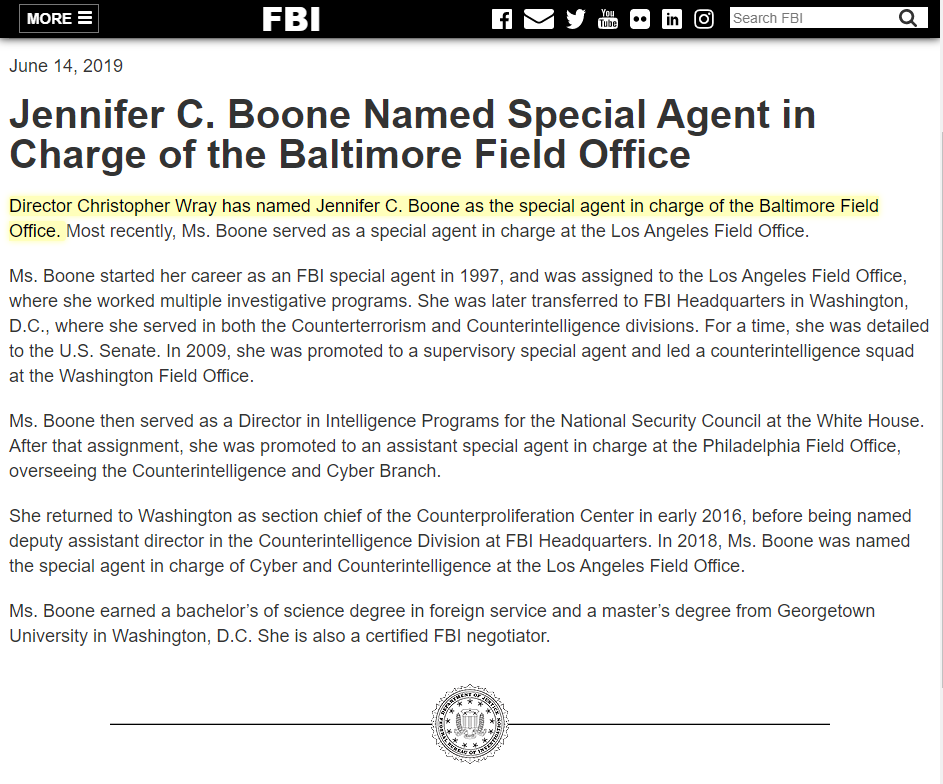 Q posted a link to a thread by @Techno_Fog that explains the role Jennifer Boone played in facilitating the surveillance of Carter Page.
Despite being involved in the illegal surveillance of Carter Page, Jennnifer Boone was promoted by Chris Wray to head the Baltimore field office.Boone was warned of red flags about having an FBI agent meet with Bruce Ohr. The concern was Ohr’s connections to Christopher Steele Boone directed the FBI agent to meet with Ohr anyway. It’s not like Boone can claim ignorance. She supervised the team tasked with determining the sources of information contained in Christopher Steele’s dossier.

We Are One of Many Vehicles Traveling on the Information Superhighway

Batten Down the Hatches

Comms Between Q and General Flynn

Anons Have a Rival

Anons take note.
You have a rival.
Q