Trump administration is now pushing the payroll tax cut proposal, but the corrupt politicians are pushing back. This is now about making the [CB] recover it is about running the system into the ground. Trump just made a trade deal with India, the new trade system is being built to go up against the globalist system. Judy Shelton is on deck and it seems she got the green light, the setup is almost complete. The [DS]/MSM are now planning their next move, they know their events are not working and they are falling apart each day. We have never seen panic like this before, they are prepared to make their next move. Trump and the patriots already know their next move, the people must see it all. The [DS]/MSM will be so desperate at the end they will show the world who and what they truly are.

Both New Delhi and Washington should also look at a preferential trade pact with 50 to 100 products and move to a free trade pact in the long term, Goyal said. (read more)

JUST IN: Pelosi, Schiff, Warner, Schumer askin the FBI for an all-Congress briefing after learning of “specific” intelligence about a foreign influence operation aimed at Congress. pic.twitter.com/RWKvwiISPb 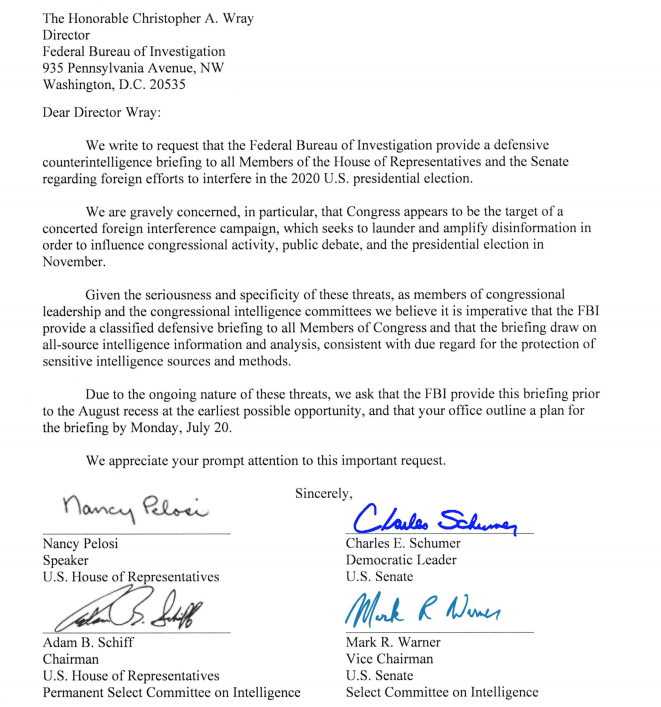 Gang of Eight (and others impacted) were already briefed. Weeks ago. This request is a CYA. https://t.co/XpF3FT8gzH

#FLYNN In 24 page filing, Solicitor General says Judge Sullivan overstepped his authority, citing case law + request to reconsider dismissal by full panel should be denied. “In this case, the panel followed established precedent from this Court + the Supreme Court to stop an…

intrusive process that would usurp the core executive power to decide whether to continue a prosecution. Both this + another circuit have granted mandamus in similar circumstances. In response, the district judge—an officer who would not normally be an interested party-took the..

extraordinary step of filing a petition in his own name seeking rehearing en banc. That petition only underscores that no case or controversy exists between the actual parties—the government + the defendant— + that any continuation of the criminal proceedings would transform..

them into a judicial, rather than executive, prosecution. As far as the government is aware, only one district judge has ever before filed a petition for rehearing en banc in a mandamus case + that petition was denied. This Court should follow the same course here.”@CBSNews pic.twitter.com/c3E9a58GAK

What happens when Flynns case is dismissed, why is they [DS] panicking

BREAKING: Speaker Pelosi slams Trump: “Whether he knows it yet, or not, he will be leaving.” @morningmika pic.twitter.com/BqbV6kEUmr

Why did Nancy Mention this,

CONTINUITY OF GOVERNMENT: What Is the Presidential Succession Act?

Is she projecting, you can see she is panicked by all of this

Clinton said the following  Donald Trump   is to try to make it as difficult as possible for people to vote, to have those votes counted, and to sew further distrust in our electoral system,

Mail-In Voting, unless changed by the courts, will lead to the most CORRUPT ELECTION in our Nation’s History! #RIGGEDELECTION The #FBI and our partners have announced that a federal grand jury returned an indictment earlier this month charging Li Xiaoyu and Dong Jiazhi for their alleged participation in a global computer intrusion campaign. https://t.co/BJOJtDA8cH pic.twitter.com/zMVJkmHubL

The U.S. Justice Department has accused two Chinese hackers of stealing hundreds of millions of dollars of trade secrets from companies across the world and more recently targeting firms developing a vaccine for the coronavirus. 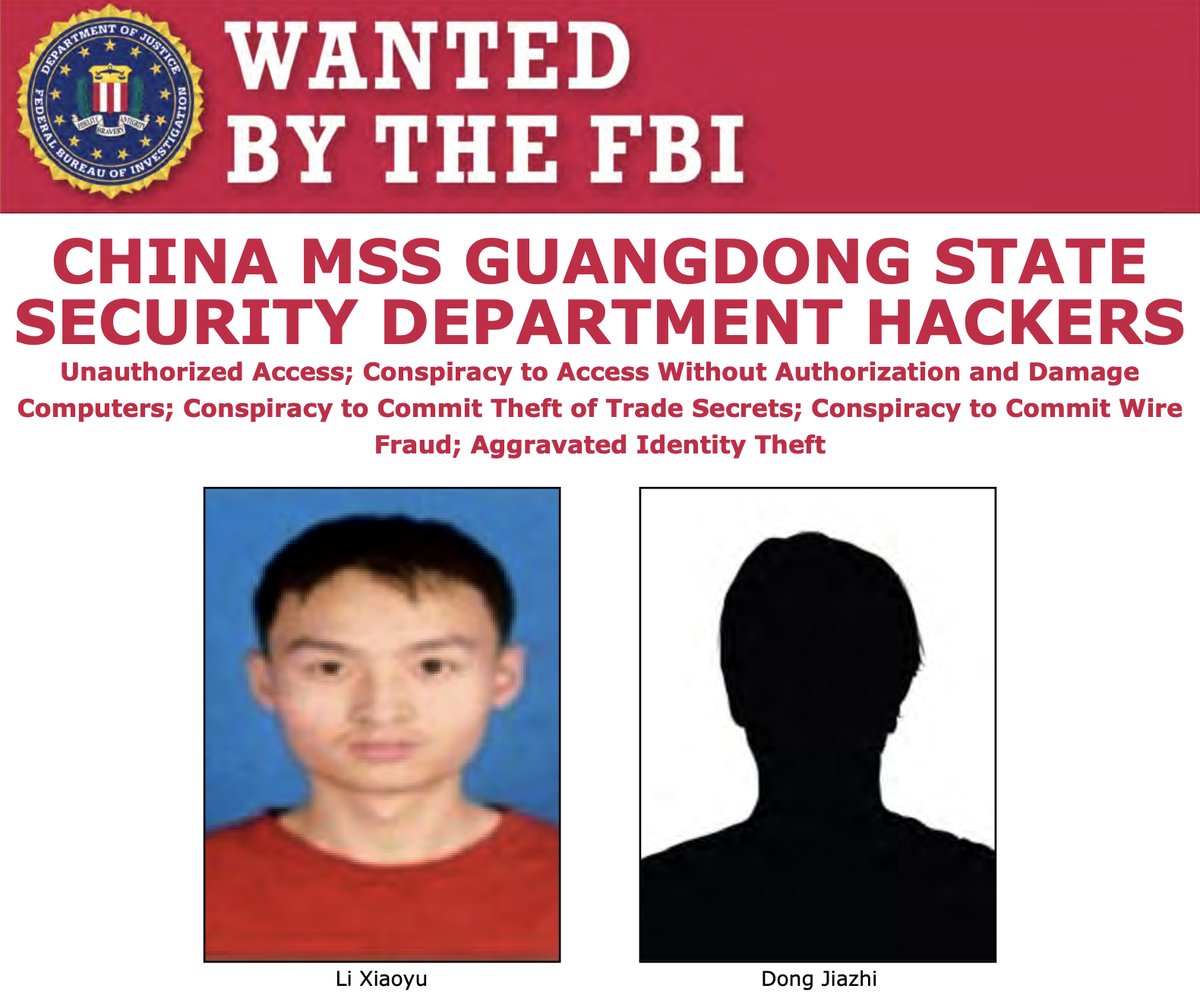 I entered the case seeking a dismissal.

As AG I have a duty to protect the fundamental rights of all Missourians including the right to keep & bear arms in self-defense of one’s person & home.

This case is extraordinary. Based on widely reported facts, this prosecution targets conduct explicitly protected both by the MO Constitution & statutes setting forth the “Castle Doctrine” of self-defense. #2A

The Founders viewed the right to keep & bear arms in self-defense as a natural right that was inalienable.This recognition predated the adoption of the US Constitution & had deep roots in English concepts of liberty forged in the Glorious Revolution of 1689. #2A

Michelle Malkin was brutally assaulted and prevented from speaking as she made her way to the speaker’s platform at a pro-police public rally in downtown Denver on Sunday.  The patriotic event, the 6th Annual Law Enforcement Appreciation Day billed as “family friendly,” was advertised in advance on social media including at Malkin’s Twitter, where she has 2.2 million followers.

Malkin was live-streaming the event from her cell phone on Periscope Sunday afternoon as the situation deteriorated after masked thugs wearing Black Lives Matter t-shirts assaulted two speakers and then set upon Malkin.  A diminutive child of immigrants from the Philippines who legally moved to the U.S. in the late 1960s, Malkin, who was born in Philadelphia in 1970, describes herself as a “little brown woman” with a “big mouth.”  Malkin linked to the entire 35-minute long Periscope video at her Twitter feed.

On the video, which had been viewed over 150,000  times by early Monday, several individuals identifying themselves as Black Lives Matter accost Malkin as one or more of them unfurl collapsible batons and begin pushing and beating on Malkin.  In the process, she loses a shoe and is eventually assisted in escaping to a waiting car by the event’s security volunteers, at which point the video feed ends.  Malkin was understandably distraught at this unanticipated violent turn of events and expressed frustration that Denver police, who were visibly present in the area, did nothing to stop the attacks or to allow the peaceful pro-police rally to continue.

Thank you for the good reviews and comments on my interview with Chris Wallace of @FoxNews. We may have set a record for doing such an interview in the heat. It was 100 degrees, making things very interesting!

Trump is talking about the heat, that its about to get hotter this summer,

We are United in our effort to defeat the Invisible China Virus, and many people say that it is Patriotic to wear a face mask when you can’t socially distance. There is nobody more Patriotic than me, your favorite President! pic.twitter.com/iQOd1whktN

Looked up the last drop using “Patriotic” and found this. [Drop 4592]

Could POTUS be telling us that he’s deceiving [them]? pic.twitter.com/hNbVHd7TsJ 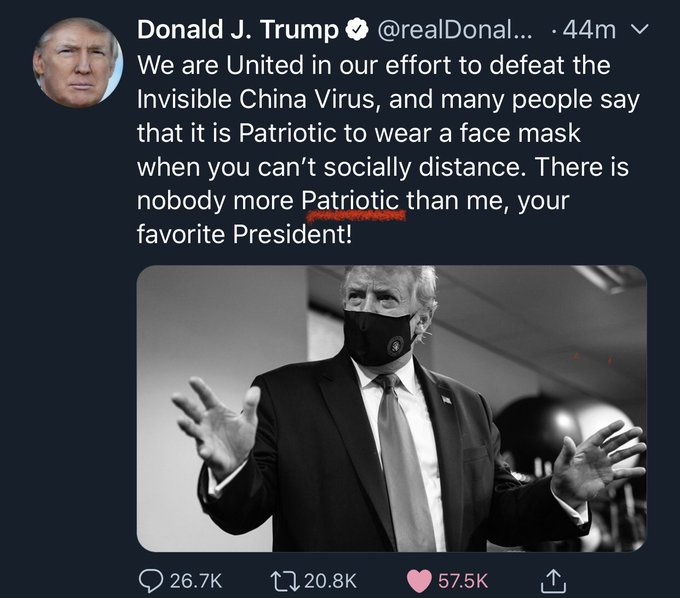 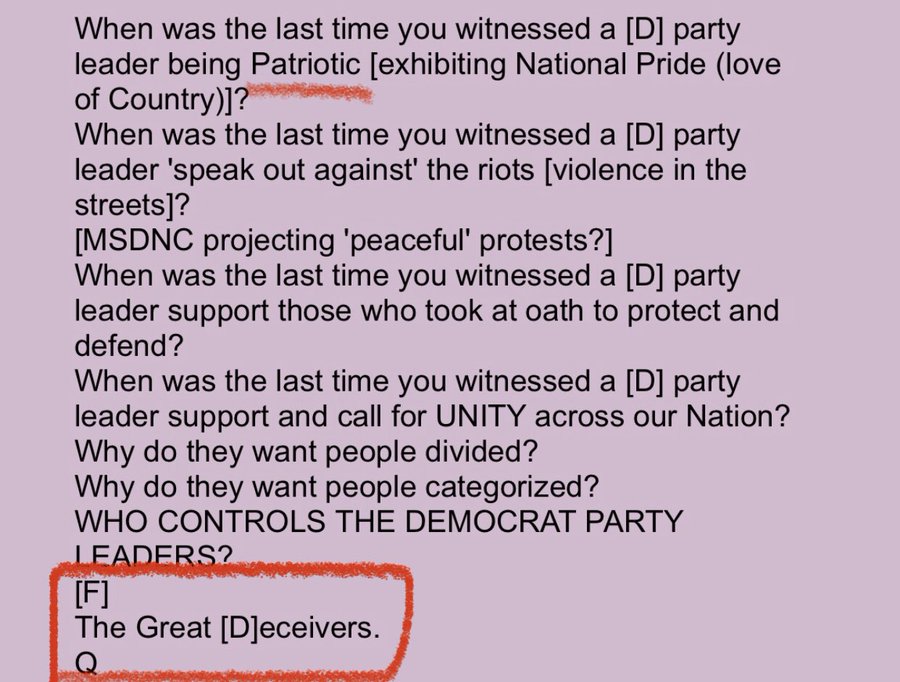 POTUS: “I’m going to do something, that I can tell you…” pic.twitter.com/ytPzotcwFk

YOUR VOICE AND YOUR VOTE ARE WHAT MATTERS MOST

Q!!Hs1Jq13jV627 May 2020 – 12:22:55 PM
YOUR VOICE AND YOUR VOTE ARE WHAT MATTERS MOST.
[WITNESSING] ATTEMPTS TO REMOVE BOTH.
1. CENSORSHIP [FASCISM][AUTHORITARIAN]
2. DEPLATFORM/REMOVAL [SILENCE]
3. MAIL-IN-VOTE FRAUD [DILUTE]
[WATER DOWN] CONSTITUTIONAL RIGHTS?
FREEDOM OF SPEECH?
WILLFULLY BLIND OR WILLFULLY ACCEPTING?
Q

DECLAS, indictments and the November election appear to be merging. Can you sense the panic?

3 thoughts on “Never Seen Panic Like This, It’s Time, This Is Not About Another 4 Year Election – Episode 2229”