The transitional economy is now being built on an accelerated rate. Trump is re-negotiating trade deals, re-working regulations. The USMCA is now on deck, Trump and the patriot need the USMCA passed, this will make the US a manufacturing powerhouse. Once passed, Trump’s leverage on China will be even greater. The [DS] is now pushing for impeachment, they are preparing the articles of impeachment, but they don’t include, quid pro quo, bribery, extortion etc.. why is that. we know why. The patriots tangled the bait and the [DS] dems took the bait. The MSM is spinning the IG FISA report because they know how damaging it really is, this report is going to be used as the foundation for what is coming. Barr says it takes time to gather evidence, make sense of it and then indict, the DOJ will not move forward unless they have it all, and soon that announcement will be made.

Since the election, women have gained +4 Million jobs, 58.3% of all new jobs created! 👏

America’s great USMCA Trade Bill is looking good. It will be the best and most important trade deal ever made by the USA. Good for everybody – Farmers, Manufacturers, Energy, Unions – tremendous support. Importantly, we will finally end our Country’s worst Trade Deal, NAFTA!

Nancy Pelosi says that #USMCA is “much better than NAFTA.”

None of this would have ever been possible without the leadership of President @realDonaldTrump!#PromisesMadePromisesKept pic.twitter.com/yWkYb2Cr4e

Watching the Democrats roll out the end of their House Impeachment Farce by revealing these two articles of impeachment & then ANNOUNCING A DEAL ON THE USMCA and trying to claim THIS IS OUR TRADE DEAL, NOT TRUMP’S! is the most hysterically funny thing ever.

Nadler just said that I “pressured Ukraine to interfere in our 2020 Election.” Ridiculous, and he knows that is not true. Both the President & Foreign Minister of Ukraine said, many times, that there “WAS NO PRESSURE.” Nadler and the Dems know this, but refuse to acknowledge!

What happen to quid pro quo?

What happen to bribery?

What happen to extortion

All proceeding according to plan

The [D] party will cease to exist once it’s all exposed.
FAKE NEWS can no longer control [dampen] public awareness of the TRUTH.
DARK TO LIGHT.
Q

The GOP pushed Nadler to accepting Ukranian interfence in the 2016 election, by doing this it debunks all those who have said that the Ukrainian meddling was debunked.  Now why would the GOP push hard to get this into the impeachment record.?

BREAKING: Nadler just reluctantly agreed with GOP request to enter this https://t.co/WEMVT7ouHJ article into the official impeachment record. This article is key. It debunks Dems & MSM talking pt that Ukrainian interference in 2016 election was “debunked”https://t.co/oNdsFAUFWI

The [DS] players are panicking, each carpet bomb, each wave will inflict pain and we will see their tweets get angry, and louder towards Trump

The damage being inflicted by @realDonaldTrump on our national conscience & our government is tragic.

Members of Congress & staffers who defend & misrepresent his indefensible actions are telling Americans it’s ok to be dishonest, unethical, & corrupt.

How far we have fallen.

We must defend our democracy, and the painful truth is that the occupant of the Oval Office is waging war against it. https://t.co/PHav51evya

At the same time the Dems introduced impeachment articles Ukraine dropped a bomb on their star witness, Mark Meadows tweeted out the following

Lets look at the IG FISA report, because the more you delve into it, the worse it gets for the [DS] players. Yesterday Durham put out a statement contradicting a key and consequential  conclusion of Inspector General Michael Horowitz,

…”last month we advised the Inspector General that we do not agree with some of the report’s conclusions as to predication and how the FBI case was opened.”

“You have to look at the 17 instances of misconduct cited in the Report, they are very bad. The FISA Court was clearly taken for a ride on this, a failure of the FBI up and fown the chain of command. It’s about as strong a medicine as I’ve seen in a report of this kind…

….in a very long time. The FBI has had some dark day in its past, but nothing like this. This was VERY SERIOUS MISCONDUCT ON THE PART OF THE FBI.” @brithume @BretBaier Are you listening Comey, McCabe, lovers Lisa & Peter, the beautiful Ohr family, Brennan, Clapper & many more?

Now what is very interesting about the mistake @ error is that all of them go in one direction against Trump,  none to his aids are anything else

I don’t know what report current Director of the FBI Christopher Wray was reading, but it sure wasn’t the one given to me. With that kind of attitude, he will never be able to fix the FBI, which is badly broken despite having some of the greatest men & women working there!

Remember Nunes criticized the FBI handling of the Dossier and then Adam Schiff put out a  memo on Feb 2018 defending Steele dossier’s and FBI’s surveillance of Carter Page.

REPORT: “[B]ecause the FBI did not have information corroborating the Steele reporting relied upon in the Carter Page FISA application, it was particularly important for the application to articulate to the court the FBI’s assessment of the reliability of the source.” Now we need to remember that Steele  says his  source said that Wikileaks got emails from Russia. the  Source firmly denies this. Steele was instructed to include this to help the DNC claim .

We now know that the Steele dossier was never corroborated, Comey, McCabe, Brennan and the rest all knew this but they decided to use it to get the warrants.

With the IG Report out, the bigger picture.

1) Team Mueller (Weissmann, Van Grack, etc.) pursued an obstruction case against Trump – when they knew the underlying investigation was based on lies, omissions, and altered evidence.

Powerful circumstantial evidence: all these “failures” worked to further the goal of FISA renewals.

4) The predication for the Flynn/Russia investigation:

Flynn’s December 2015 travel to attend the RT Gala in Moscow – after which he fully debriefed the US Govt.

[Halper’s accusations that Flynn was having an affair w/ a Russian spy (@RealSLokhova) may also be part of this] pic.twitter.com/nKgnRXylyW 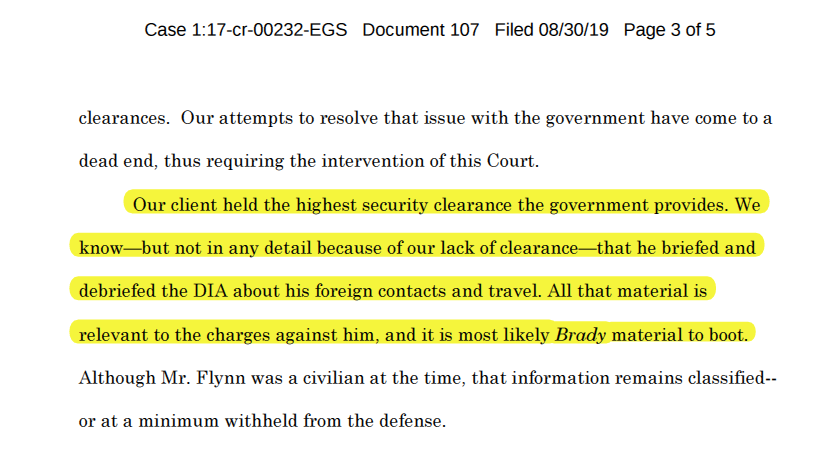 Just how bad was the FBI’s Russia FISA? 51 violations and 9 false statements

The Obama administration told Russia it was investigating Russian meddling, but refused to tell the Trump campaign what it was doing. The FBI later lied to Congress about how it used a fake “defensive briefing” to spy once again on Trump campaign staff.

Now the FBI kept the operation very small, why, because they didn’t want anyone catching on to what they were really doing. 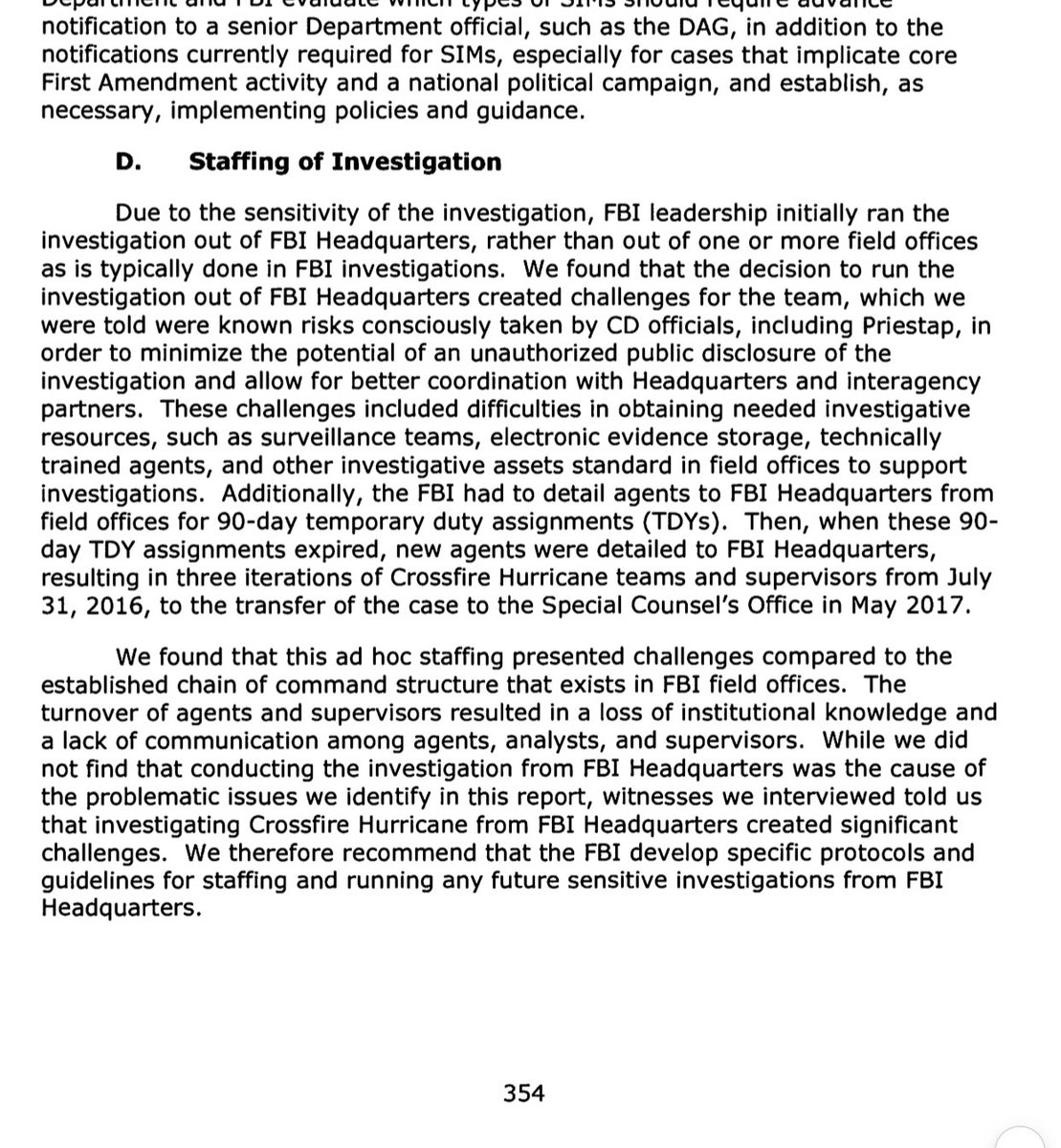 The [DS] players covered their tracks as they went along, at least they thought they did, the scope of IG Horowitz was to show how they side steps the rules and held back exculpatory evidence from the courts.   Durham and Barr have much more, they spoke to people outside of the agency, they have personal emails, documentation etc…
recap
The FBI:
doctored documents
hid exculpatory evidence
relied on fake Clinton-funded Steele dossier
had no good explanation for misconduct

The MSM/DS players are using the FISA as if this is the end, that the [DS] players have nothing to worry about , they are cleared, they have it backwards this is the beginning of their end, The IG report sets up the Declas, which leads to the criminal investigations. The FISA is the first of many waves, these are the carpet bombs, the MOAB is coming, but with each wave it makes the DS struggle, it makes the MSM struggle to explain it all, it will get harder and harder until they are backed in the corner and the spin no longer works.  Then its GAME OVER

Horowitz testifies tomorrow and we are already seeing events, there was one in NJ with a shooter on the roof top shooting at people

Barr was being interviewed

We get one chance at this,

3. to indict someone the DOJ needs proof beyond a reasonable doubt