The Fed head Paul Volker passed away at 92, he was the individual that was handling the transition during the 70’s with Nixon. The patriots are dismantling the globalist system, first the trade deals, next the trade organizations. Trump and the patriots are now going after the WTO. The [DS] held another round of fake impeachment hearing, same show different day. The IG released the report and the report show that the FBI withheld exculpatory evidence to obtain the FISA warrants, the IG lists many violations and Durham and Barr both released statements that there is much more to the story. The IG report was to name the players, outline what they did, the next level will show why they did it. Those who have committed treason will be held accountable.

World Trade Organization Becomes Irrelevant on Wednesday, Thanks to Trump

FIVE INDISPUTABLE FACTS:
1. No evidence of wrongdoing by @POTUS
2. Ukraine said there was no pressure
3. Lethal aid to Ukraine wouldn’t exist w/o @realDonaldTrump
4. There’s no obstruction whatsoever
5. This is an unfair & unprecedented impeachment process

RG is going to present his findings to congress and Bill Barr, Jason Miller is letting us know that the information is coming.

Report from @RudyGiuliani will likely be a little later than Wednesday, to be clear, but this evidence will definitely be put forward soon! https://t.co/51fEEKJUF0

The MSM is now in full spin mode, they are not digging into the report because there is nothing that they want to report, so they are using the high level headlines to convince everyone that this is a nothing burger, hear are some of the headlines.

Report: Start of Russia probe was justified, but had significant errors -cnn

The MSM are pushing two narratives, opening the probe was justified and there was no bias, lets go with the first part, it was justified, once the FBI started to probe they would have found that there was nothing there there if they were truly investigating and the probe would have complete stop, but they knew that this was not part of their agenda, that is why they with held excuplatory evidence, Durham put out a statement

Now as we know the IG report has been released, and with it we get a Q proof, the The DOJ Twitter account posted the IG FISA Report at 1:29 EST

Pics of the Pen, Notebook and a New IWC Watch

The report was posted at that time, we have another Q proof which we will go over in a minute but first lets look at the FISA report that the MSM is saying that it is a nothing burger.

American people will finally learn the truth that the Steele dossier WAS IN FACT used in Obama Administrations Intelligence Community Assessment! Obama’s Dossier

Let me start out with the role of the review and this is from the report. 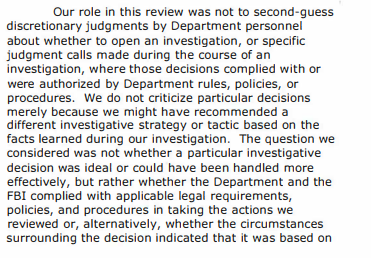 In 2017, the FBI told @ChuckGrassley in a letter that it provided a “defensive briefing” to Trump and his campaign in 2016.

The IG report today shows that claim was a lie. The FBI attended the briefing to spy on the Trump team, not warn it of Russian attempts to infiltrate it. pic.twitter.com/2wpP2RrpYj

Tom Fitton tweeted out the following

The worst accusations against @carterwpage – that he was was offered a “bribe” in return for lifting sanctions – turned out to be a Steele lie.

Texts from the “sub-source” never even discussed a bribe. pic.twitter.com/o5b1o8rCtC 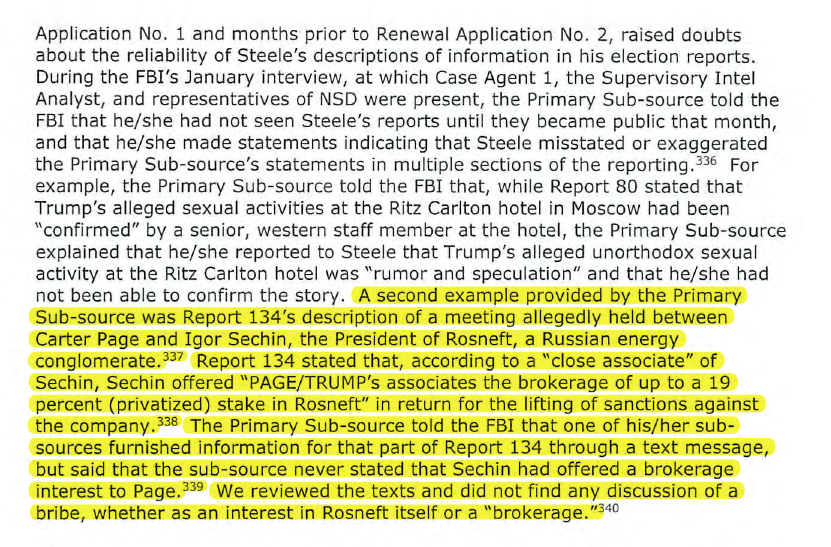 Remember when Schiff tweeted this out back in July 22, 2018

The release of the Carter Page FISA application makes clear, once again, the FBI acted lawfully and appropriately.

This hasn’t stopped the President and Republicans from repeating the same fraudulent taking points in the discredited Nunes memo.

Now the MSM is making a big deal that there was no BIAS, but what does this really mean, not much, it means that nobody said we hate Trump and we are getting a FISA, nobody did this, and I would expect no one really would do this because they thought that their plan was going to work with no problem 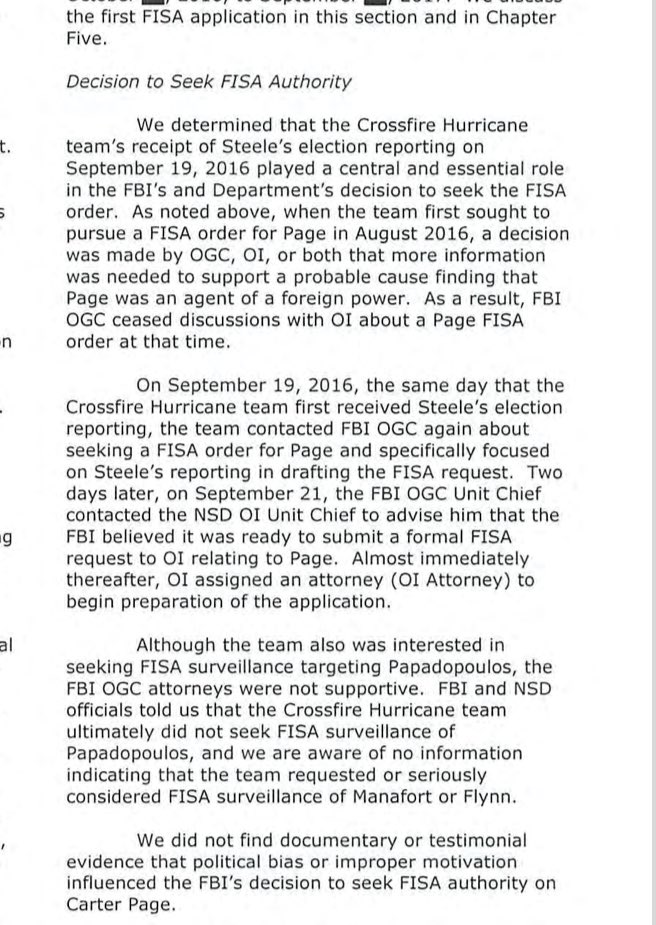 THREAD: You will probably see plenty of spin and headlines today claiming the FBI is exonerated in this report. That is laughable, to put it lightly. The report eviscerates senior officials who broke rules and abused power.

Let’s go over some of the details.

For starters, the “no bias” talking point you see is misdirection from the left. See this line, from the IG:

If you see someone harping on the “bias” point, they are giving you a broad, misapplied talking point to distract from the specifics within the IG report that are damning.

In its initial FISA application, the FBI claimed Christopher Steele was a reliable source, and the information was corroborated, but the report says the opposite. 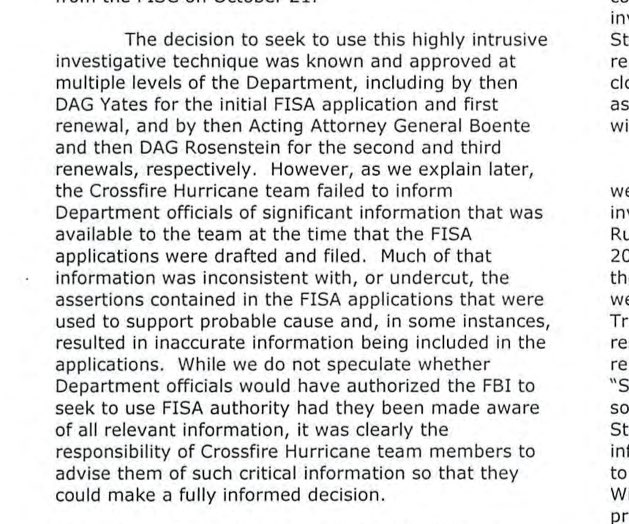 We also come to find out that the FBI used Christopher Steele to get info on General Flynn, Techno Fog tweeted out the following

The FBI used Christopher Steele to get information on General Flynn.

FBI promised Steele he would be paid “significantly” for this information. 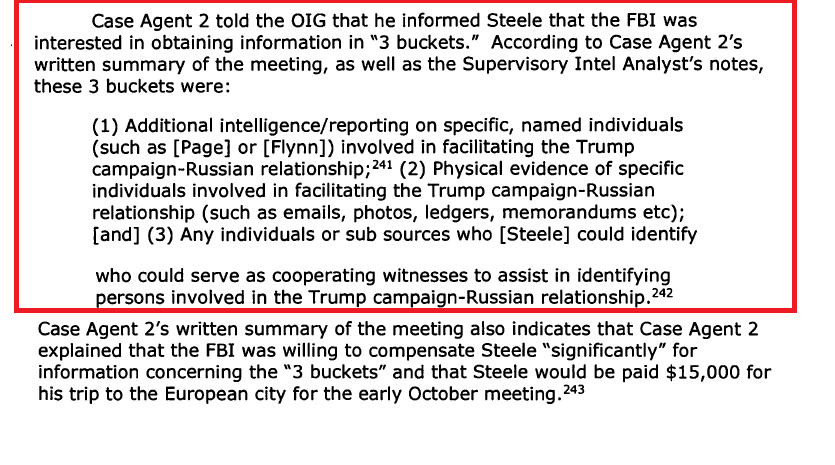 All The [DS] players knowingly knew the information was not corroborated but they went went ahead with their agenda, this is huge, Comey, McCabe, Baker etc 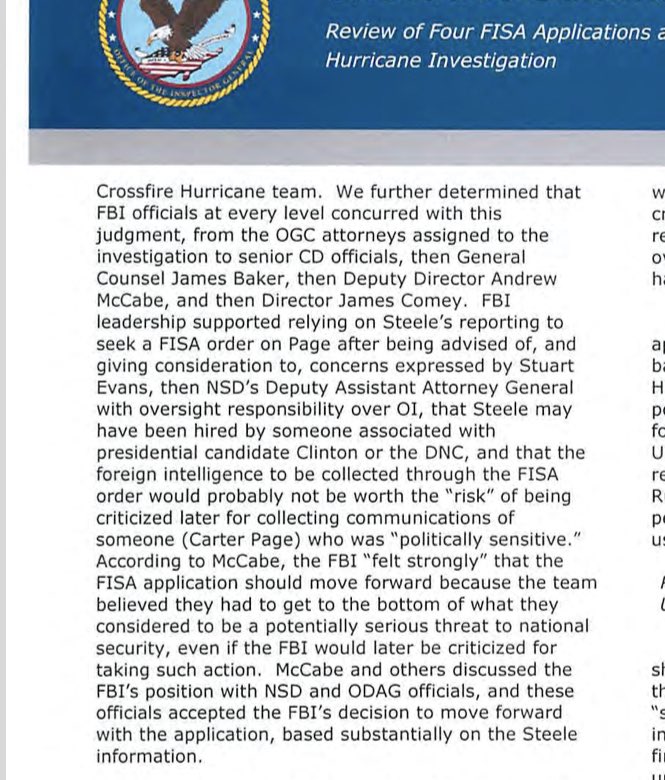 This next part shows how the FBI knowingly omitted exculpatory information  when they  filed,  let me read 14,15,16,17 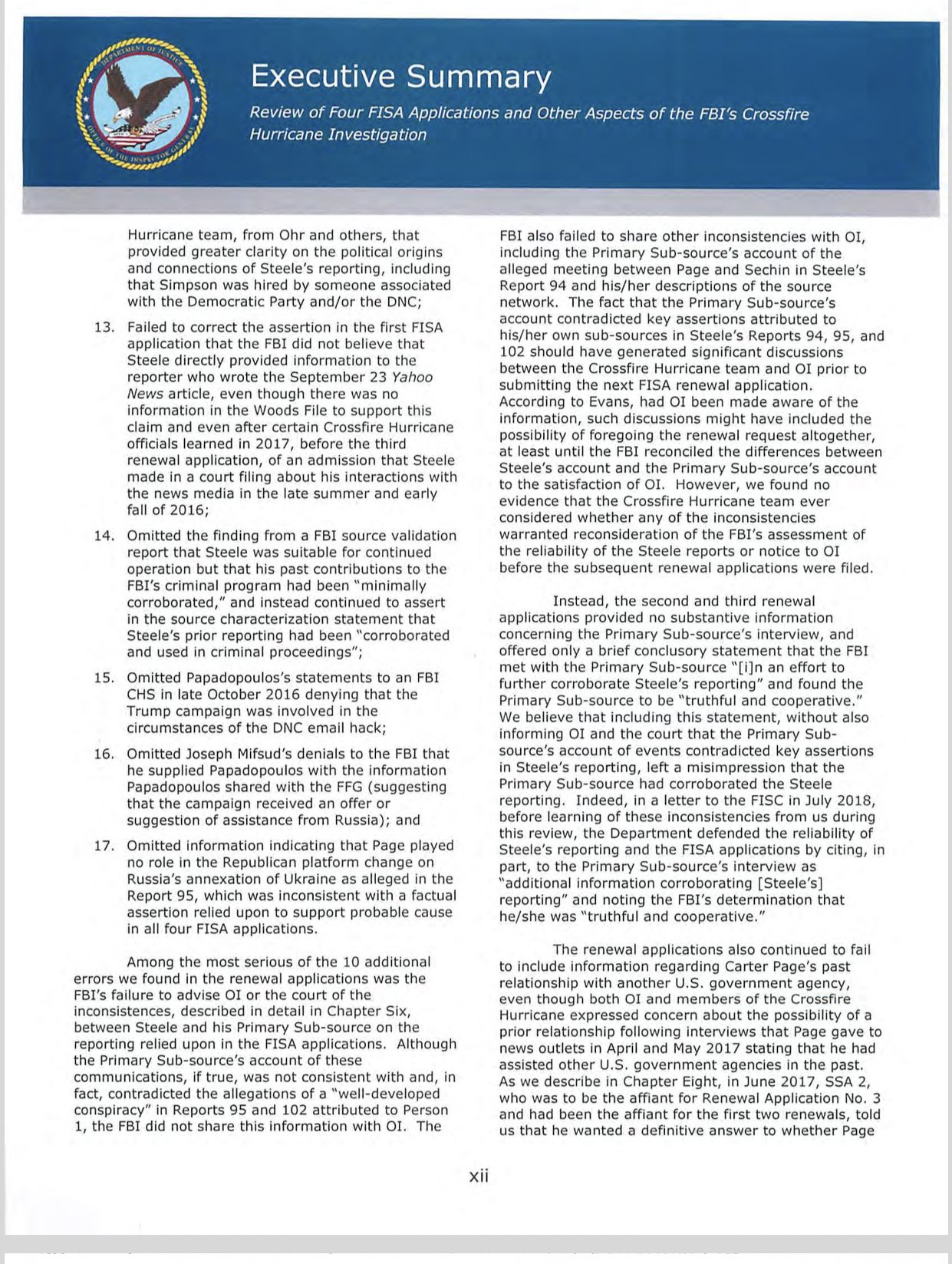 Then we find out Brennan lied, not really a surprise to anyone who has been following this.

Now we find out that the FBI was spying on more than two people, they were spying on four

“We thought they spied on two Americans, we now know it was FOUR. The Inspector General’s report confirms what many of us feared: James Comey’s FBI ignored guidelines and rules in spying on President Trump’s campaign in 2016. e now know that within one week of the investigation opening, the FBI was surveilling the campaign and four specific individuals associated with it. The U.S. government’s powerful tools designed and authorized for international intelligence gathering were deployed to monitor the activities of a Presidential campaign. This is a grave matter that should deeply trouble Americans of all political stripes. There are many lingering questions, and I expect both @RepJerryNadler and @RepMaloney to convene hearings with Inspector General Horowitz as soon as possible.”

Statement by Attorney General William P. Barr on the Inspector General’s Report of the Review of Four FISA Applications and Other Aspects of the FBI’s Crossfire Hurricane Investigation

The IG was given a limited scope. US Attorney Durham’s investigation is a much wider scope, he is invetigating the  State Dept, C_A, ODNI, Pentagon, and more and will cast a larger light on what really happened.

So it was all lies. No treason. No spying on the campaign. No tapping Trumps wires. It was just good people trying to protect America. https://t.co/9nurCaIBq2

Remember these violations all occurred while Comey was running the operation, he was the head guy

If you type Comey into the report it comes up with nothing on Comey, but if you type C o r n e y, it comes up with every Comey mention, was this done on purpose, I believe so, remember this report does not show treason, spying, wire tapping, this report shows those who knowingly knew tha dossier was not corroborated, that knowingly witheheld exculpatory evidence and applied for FISA knowing this but did not present this to the judges

Remember what the US Attorney  said that the Crossfire Hurricane probe was started improperly.

Based on the evidence collected to date, and while our investigation is ongoing, last month we advised the Inspector General that we do not agree with some of the report’s conclusions as to predication and how the FBI case was opened.”

People are going to be held accountable.

Now this is very important the IG could  not  determine the intention or justifications for the blatant abuse of the FISA process.

This then leads us to why Durham needed to make this statement today, he has that part, he will bring it out into the light

This is the conclusion of IG, the FISA court was misled. AG Barr says report substantiates ‘clear abuse of FISA process’