Skip to content
Reports
December 2, 2020December 3, 2020 x22report
SPREAD THE WORD
The [CB]s and the [DS] thought they had the upper-hand, they thought that their plan was moving forward. They will soon realize that their plan was a trap by the patriots. The MSM is still pushing the idea that the economy is about to implode. The [DS]/MSM are now being backed into a corner. The evidence is about to be produced. Barr places Durham into position. The storm is about to hit, the [DS] is now panicking, their [e] fraud did not work, people are waking up and now they are trapped. The raid on their system is about to happen, hold the line until the right moment. SP announce that the white hat hackers got it all and the connection to other countries is being produced. Trump makes one of the most important speeches about [e] fraud. Ep 2343a – The [CB]s Trapped Themselves In Their Own Plan, The World Is Watching

Is @UPS supposed to carry official election material? Because I and three #DominionWatch volunteers saw a UPS truck picking up a ballet of boxes marked “official absentee” from the Secretary of State’s warehouse. pic.twitter.com/VY1NPJgPNE

BOOM!!!!!
Gwinnett County Official admits to taking data from the Election Management System, plugging it into a laptop, then filtering it with excel. This circumvents the rules that external software isnt allowed on election machines!! https://t.co/9CVJCDM6BK

Not to mention we received a report that despite Federal Court order, machines were being removed from Gwinnett County elections offices and a shredder truck was there. @LLinWood @KrakenWood @GenFlynn @JosephJFlynn1 @abigailcfrye https://t.co/wIlDzAJU90

In case you missed it…. “White Hat Hackers” Enjoy the show!

#Election2020results From a DOJ spokesperson: “Some media outlets have incorrectly reported that the Department has concluded its investigation of election fraud and announced an affirmative finding of no fraud in the election. That is not what the Associated Press reported nor

what the Attorney General stated. The Department will continue to receive and vigorously pursue all specific and credible allegations of fraud as expeditiously as possible.” @ClareHymes22 @CBSNews

Has Kamala resigned from the Senate yet, no, why?

News: Here is a copy of the order from Barr appointing John Durham as special counsel of the investigation into the origins of the Russia probe pic.twitter.com/rUFbDO6Amj 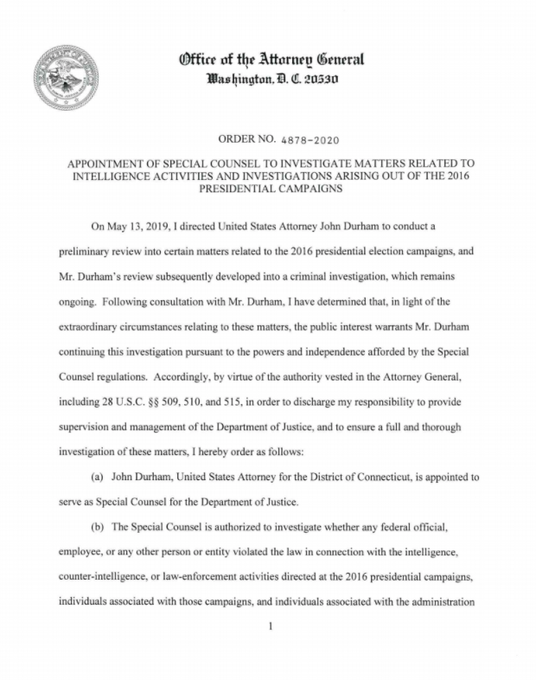 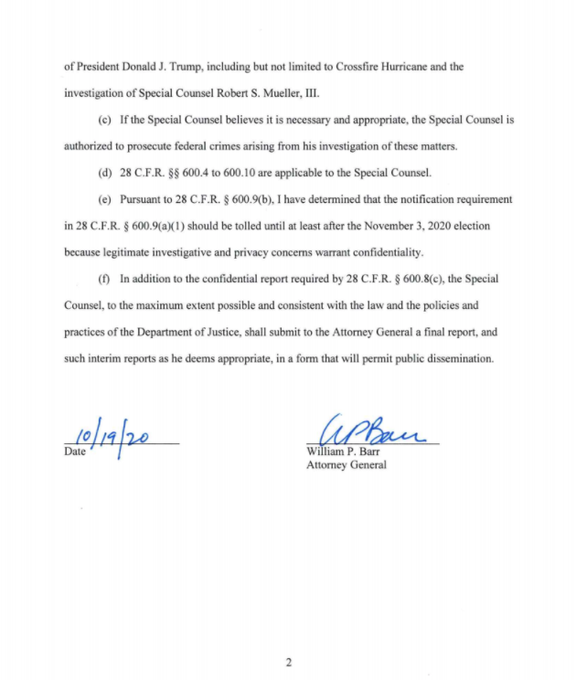 (c) Civil and administrative jurisdiction. If in the course of his or her investigation the Special Counsel determines that administrative remedies, civil sanctions or other governmental action outside the criminal justice system might be appropriate, he or she shall consult with the Attorney General with respect to the appropriate component to take any necessary action. A Special Counsel shall not have civil or administrative authority unless specifically granted such jurisdiction by the Attorney General.

Kayleigh McEnany just held a press conference where she took dozens of questions over 30 minutes and not one reporter asked about the appointment of Special Counsel John Durham. An absolute disgrace. They literally think they can just pretend that his investigation doesn’t exist.

Legal experts say this may be a felony. We‘ve referred it to law enforcement.

It’s amazing that CNN had no problem aggressively running with secretly recorded audio tapes of the First Lady non-stop for weeks, but has a serious problem when someone does the exact same thing to them!

If it wasn’t for double standards, they would have no standards at all. https://t.co/THV2PpHmiN

Section 230, which is a liability shielding gift from the U.S. to “Big Tech” (the only companies in America that have it – corporate welfare!), is a serious threat to our National Security & Election Integrity. Our Country can never be safe & secure if we allow it to stand…..

…..Therefore, if the very dangerous & unfair Section 230 is not completely terminated as part of the National Defense Authorization Act (NDAA), I will be forced to unequivocally VETO the Bill when sent to the very beautiful Resolute desk. Take back America NOW. Thank you!

The calm before the storm ⚡️

A team of Rangers silently hold their position before executing a platoon raid.

Statement by Donald J. Trump, The President of the United States