Skip to content
Reports
December 3, 2020December 4, 2020 x22report
SPREAD THE WORD
96,507
The economy continues to improve, the [CB]/[DS] plan has failed, the economy did not implode on itself. The US is going to come out as the shining star. Trump gets one of this nominees into position, Shelton is standing by, everything is going according to the plan. Trump and the patriots know the playbook of the [DS], they are using their plan against them. The [e] fraud is off the charts and now the evidence is being produced. We are now seeing video evidence and other evidence. This is just the beginning. The [DS] plan lets us know they will be trying to create delays in the electoral counting, they are trying to make it so nobody becomes President, then call on the military. Trump and the patriots know the playbook, it begun in with the keystone state and will end there, military control, constitution is the only way forward. Ep 2344b – It Begins And Ends With The Keystone, [DS] Battle Plan Known, Military Control Ep 2344ba – Trump Gets Waller On Fed Board, Shelton Standing By, Restructure On Deck

Waller is known as a “dove” favoring low interest rates.[13] He has worked closely with the St. Louis Federal Reserve bank’s president, James B. Bullard, who was a vocal supporter of lower interest rates in 2019.[3] Waller has argued that the Fed should not raise rates at a time (such as in 2019-20) when inflation is low and people’s savings are high

A Michigan Democrat made the mistake of asking a witness just now why more witnesses don’t come forward.

The Amistad Project filed a motion last night in Maricopa Co Superior Court contesting the results of the 2020 presidential election.

Expert data analysis indicates hundreds of thousands of potentially illegal votes were counted while over 100,000 legal ballots were not counted.

In Arizona, it turns out that 3% of the votes cast in the 100 count vote sampling were tainted or worse. This would be, if carried forward, approximately 90,000 votes more than we would need to win the State. Now we were granted a much larger sample to work with. Wow!

Video footage from Georgia shows that poll workers were told to stop counting and leave, while 4 people stayed behind to continue counting ballots in private pic.twitter.com/bEYdFMAvsa

The VIDEO EVIDENCE being shown in the Georgia Senate Hearing is SHOCKING.

Room cleared at 10:30pm. 4 people stay behind. Thousands of ballots pulled from under a table in suitcases and scanned.

Wow! Blockbuster testimony taking place right now in Georgia. Ballot stuffing by Dems when Republicans were forced to leave the large counting room. Plenty more coming, but this alone leads to an easy win of the State!

In September 2019, a document was published that details the 2020 election – so far – to a frightening precision.

THIS IS THEIR BATTLE PLAN.

Only by knowing their strategy can you know how to win.https://t.co/7AQ0tAvKnO pic.twitter.com/TMlRKEWpLa 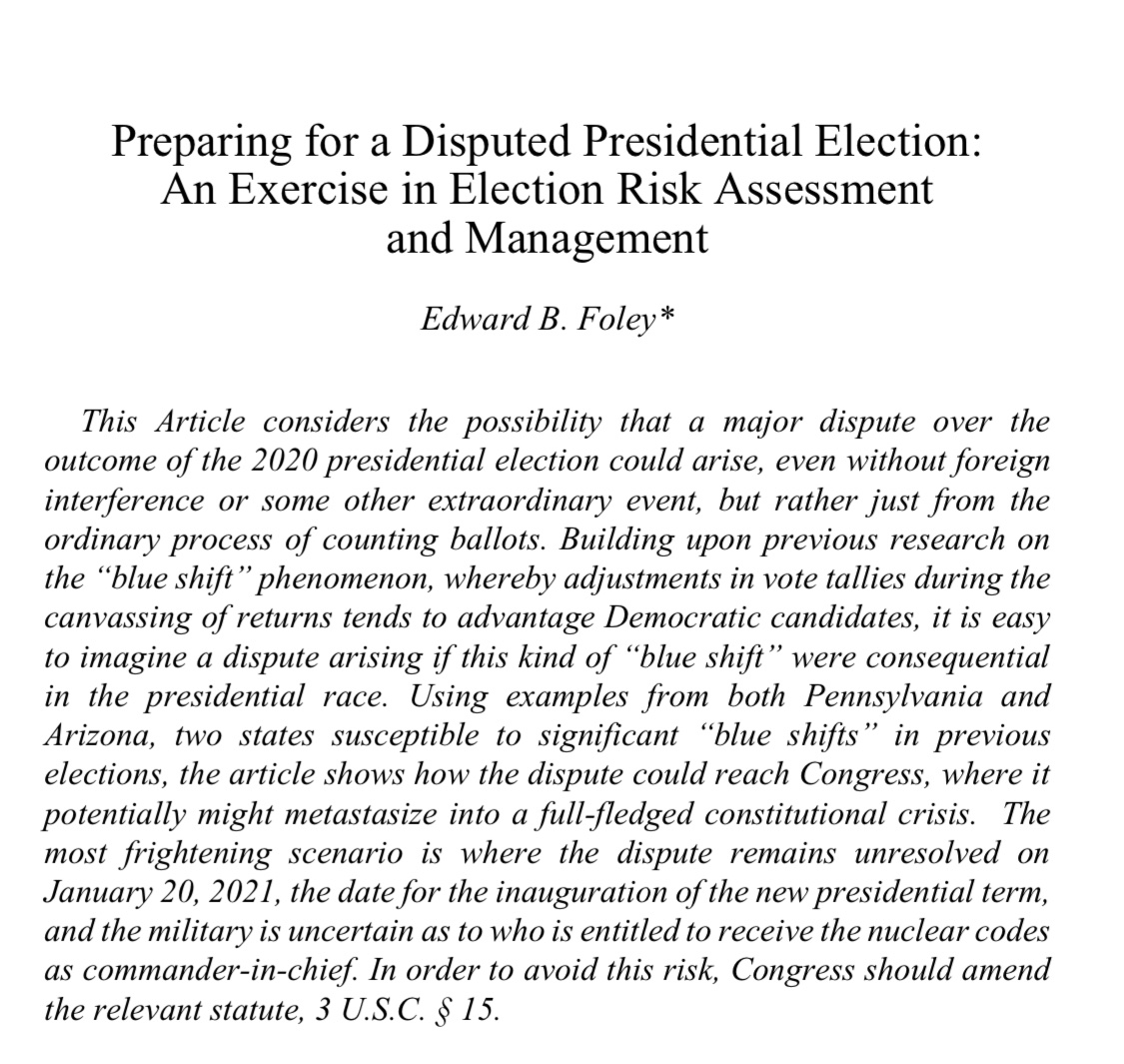 This is the game plan that was written last year which laid out the detailed, in-depth, strategy that is possibly being used to obstruct the election and ERODE our First Amendment rights. https://t.co/fXj7d2S3qZ

Edward B. Foley is an American lawyer, law professor, election law scholar, and former Ohio Solicitor General.[1] He is the theorist of the blue shift, a phenomenon in US politics in which in-person votes overstate overall percentage of votes for the Republican Party (whose color is red), while provisional votes, which are counted after election day, tend to overstate overall percentage of votes for the Democratic Party (whose color is blue). When the provisional votes are counted after the election, there is often a shift in totals toward the Democrat, or blue, candidate.[2][3]

It is Election Night 2020. This time it is all eyes on Pennsylvania, as whoever wins the Keystone State will win an Electoral College majority. Trump is ahead in the state by 20,000 votes, and he is tweeting “The race is over. Another four years to keep Making America Great Again.”Although 20,000 is a sizable lead, they have learned in recent years that numbers can shift before final, official certification of election results. They are afraid of “calling” the election for Trump, only to find themselves needing to retract the call—as they embarrassingly did twenty years earlier, in 2000. Trump’s Democratic opponent, _________ (fill in the blank with whichever candidate you prefer; I will pick Elizabeth Warren since at the moment she is the front-runner according to prediction markets),1 is not conceding, claiming the race still too close to call. Both candidates end the night without going in front of the cameras. In the morning, new numbers show Trump’s lead starting to slip, and by noon it is below 20,000. Impatient, Trump holds an impromptu press conference and announces:

Given that 3 U.S.C. § 15 requires the counting process to consider one state at a time in alphabetical order, what happens if Congress appears to be stuck on a particular state (before any candidate has reached an indisputable majority of all electoral votes in the count)? Does the vice president of the United States, as President of the Senate and thus presiding officer over the special electoral count procedure under the Twelfth Amendment and 3 U.S.C. § 15, have constitutional or statutory authority to insist upon completion of the count in a timely manner (before noon on January 20), if the two chambers of Congress otherwise would remain mired in a dispute over a particular state?

There are various provisions of the Electoral Count Act that endeavor to move the count along, so that it does not become stuck or bogged down. 3 U.S.C. § 15 itself provides: “When the two Houses have voted, they shall immediately again meet, and the presiding officer shall then announce the decision of the questions submitted.” This provision seems to authorize the vice president to make some definitive pronouncements in light of disagreement between the two chambers. But the extent of the vice president’s authority is unclear in this regard.

The Twentieth Amendment seems to contemplate the possibility that the counting of electoral votes may be incomplete and thus there might be neither a president-elect nor a vice president elect at noon on January 20, when the terms of the previous president and vice president expire, and thus there would need to be an acting president to be identified in a statute enacted by Congress:

Related, if there were to exist the situation at noon on January 20 of two simultaneous claims to the status of commander-in-chief—one from previously incumbent president claiming to have been declared re-elected by the outgoing vice president, and the other from the Speaker of the House claiming to assume the status of acting president given the House’s declaration that there is no president-elect because the electoral count remains disputed and incomplete—do military officials, including those responsible for control of nuclear weapons, wishing to obey the lawful commander-in-chief know how to decide who is the lawful commanderin-chief?

Key:
Military Intelligence v FBI CIA NSA
No approval or congressional oversight
State Secrets upheld under SC
Who is the Commander and Chief of the military?
Under what article can the President impose MI take over investigations for the 3 letter agencies? What conditions must present itself? Why is this so VERY important? Who surrounds POTUS? They lost this very important power _ the one area of the govt not corrupt and directly serves POTUS.
22
Anonymous 11/01/2017 00:57:15 ID: grTMpzrL
4chan Thread/Post: 147433975 / 147445681
Direct Link: 147445681
Who controls the NG?
Why was the NG recently activated in select cities within the US?
Can the NG work in coordination w/ the marines?
Do conditions need to be satisfied to authorize?
What former President used the military to save the republic and what occurred exactly?
Biggest drop to ever be provided on Pol. Study and prepare. The masses tend to panic in such situations. No war. No civil unrest. Clean and swift.

“so on Friday there were a bunch of DNC emails posted on Wikileaks, that was our guys”

“That was our guys” 🤔 pic.twitter.com/FbMKQh7QrG

Our guys: Russians or someone else?

“Our guys” could benignly mean “our suspects”, such as Russian hackers. Or it could mean something sinister. The fact is, we have no way to gage because we have never seen the underlying intel or Crowdstrike reports attributing the hack to Russia. That should be declassified. https://t.co/1xvNwUVyho

The NDAA does NOT contain any reform to Section 230 but DOES contain Elizabeth Warren’s social engineering amendment to unilaterally rename bases & war memorials w/ no public input or process. I cannot support it

Looks like certain Republican Senators are getting cold feet with respect to the termination of Big Tech’s Section 230, a National Security and Election Integrity MUST. For years, all talk, no action. Termination must be put in Defense Bill!!!

A huge group of people gathered outside the Staten Island bar – in the middle of a COVID hot zone – that was shut down last night by police for violating pandemic safety rules. Many could be seen carrying the American flag. https://t.co/wNY30RhP1l pic.twitter.com/c4CLajRio7

Happening now in Staten Island: American Patriots protesting against @NYGovCuomo and @NYCMayor for arresting a bar owner for going into his own establishment.

Reporter: “Do you still have confidence in Bill Barr?” POTUS “Ask me that in a number of weeks from now.”

https://www.youtube.com/watch?v=G2qIXXafxCQ
This is not another 4-year election….
Listen very carefully.
Power returned to the people.
Long term solutions.
Panic.
Q