New homes sales are soaring, the real estate market is rebounding and people are taking advantage of the low rates. Homebuilder sentiment is up. Trump and the patriots are getting ready to use another around of stimulus to help the everyday person get back on their feet. The [DS]/MSM blocks are being removed one by one, the patriots are clearing the path. Trump calls out BO again and begins to educate the people that BO committed treason. The [DS]/MSM are being pushed to where the patriots want them. JB & GS information leaked in the same time frame as GB was removed from the SDNY. The attack run has begun, the [DS] doesn’t event have a chance.

US New Home Sales Soar In May, After Huge Downward Revision 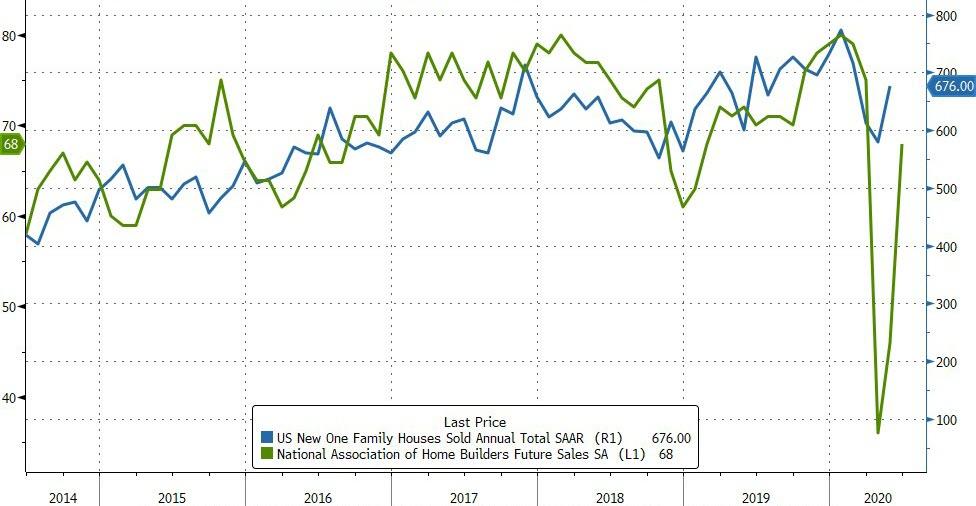 I wonder if he is actually going to follow through on this or are we going to see events popup right before so he can bow out.

How many aliens will illegally vote in elections this year? Based on previous study, well north of one million. @realDonaldTrump @JudicialWatch https://t.co/yB3WTZ5tdM

The 200th mile of Wall just went up along the US-Mexico border!

Acting USA Strauss: As alleged, Ethan Melzer, a private in the U.S. Army, was the enemy within. He allegedly attempted to orchestrate a murderous ambush on his own unit, unlawfully revealing its location, strength & armaments to a neo-Nazi, anarchist, white supremacist group.

Married Hollywood executive David Guillod is charged with 11 sex crimes, including rape and kidnapping for ‘attacks on four women dating back to 2012’

Cases are going up in the U.S. because we are testing far more than any other country, and ever expanding. With smaller testing we would show fewer cases!

Cases up only because of our big number testing. Mortality rate way down!!! https://t.co/bKFmgOLEGZ

This is why [they] are now starting to make masks mandatory. The death rate has plummeted,  more tests means the death rate becomes less and less, soon covid19 will be equal to the common cold

Due to Seattle’s unrest, billion-dollar investment firm moving to Phoenix

the sculptor, James Earle Fraser, said this about the Roosevelt statue: “The two figures at [Roosevelt’s] side are guides symbolizing the continents of Africa and America, and if you choose may stand for Roosevelt’s friendliness to all races.”

§1369. Destruction of veterans’ memorials
(a) Whoever, in a circumstance described in subsection (b), willfully injures or destroys, or attempts to injure or destroy, any structure, plaque, statue, or other monument on public property commemorating the service of any person or persons in the armed forces of the United States shall be fined under this title, imprisoned not more than 10 years, or both. 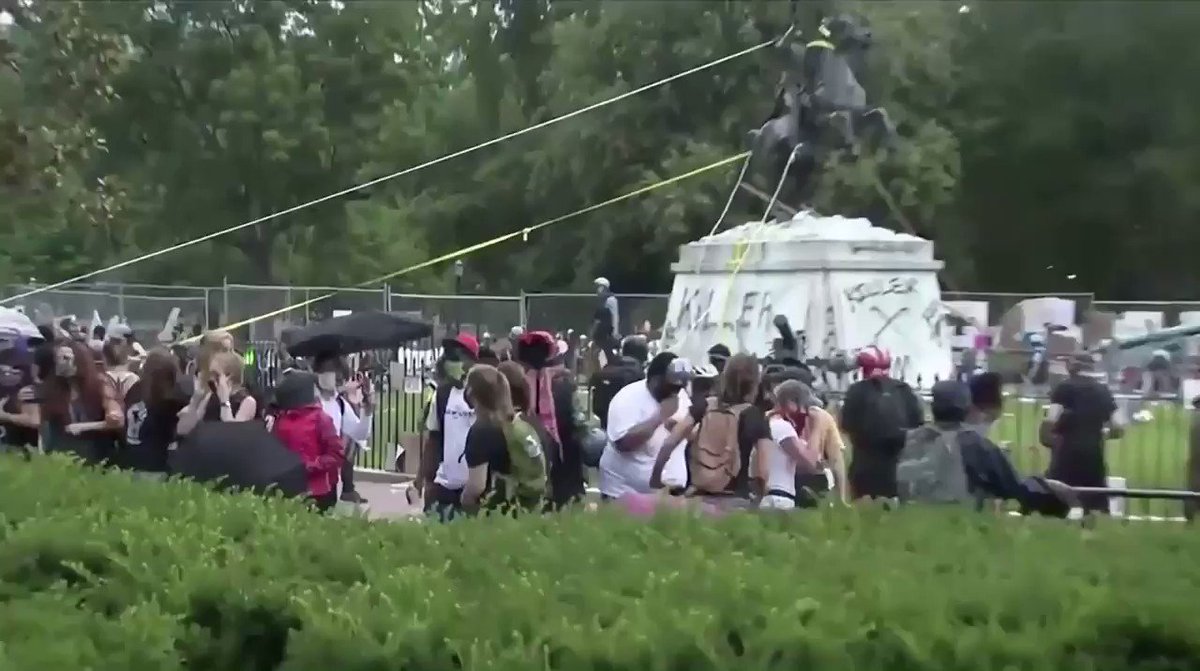 I have authorized the Federal Government to arrest anyone who vandalizes or destroys any monument, statue or other such Federal property in the U.S. with up to 10 years in prison, per the Veteran’s Memorial Preservation Act, or such other laws that may be pertinent…..

There will never be an “Autonomous Zone” in Washington, D.C., as long as I’m your President. If they try they will be met with serious force!

Digital Warriors, Let’s Do This!

President Trump on Monday suggested without evidence that his predecessor, former President Obama, committed treason in connection with the investigation into the 2016 Trump campaign’s contacts with Russia.

“Treason. Treason. It’s treason,” Trump said in an interview with CBN News. The president did not elaborate on the specific charge but repeated his assertion that the previous administration “spied” on his campaign in the course of the Russia probe.

EXCLUSIVE: President Trump on what crime President Obama would have been potentially committing regarding the previous administration spying on his campaign: “Treason. It’s treason.” Watch the explosive clip from my White House interview with @realDonaldTrump @POTUS @WhiteHouse pic.twitter.com/IFui3fNigS

take a meme leave a meme

this is how anons pass out ammo

“I just want to make it very clear that our guidance was absolutely crystal clear,” Verma said in an exclusive interview late last week. “It was clear and unmistakable. Any insinuation to the contrary is woefully mistaken at best and dishonest at worst. We put out our guidance on March 13. It’s very clear when it says that, I’m actually going to read this to you, it says that: ‘When should a nursing home accept a resident who is diagnosed with COVID-19?’ It says: ‘A nursing home can accept a resident diagnosed with COVID-19 and still under transmission-based precautions,’ which means if this person is infectious you have to take precautions. It says ‘as long as the facility can follow CDC guidance for transmission-based precautions.’ It says: ‘If a nursing home cannot, it must wait until these precautions are discontinued,’ meaning if you are not able to care for this patient—somebody is still positive and you’re not equipped to care for the patient, then you shouldn’t accept the patient into your care. That’s really important because longstanding discharge—when you’re discharging a patient from the hospital, longstanding guidelines require when you transfer them somewhere you transfer them to a place that can take care of their needs whether they’re going home or they’re going to a nursing home or some other facility.”

Verma added later that it is “disingenuous” for Democrats such as Cuomo to claim they were following federal guidelines when they were not.

A translated Ukrainian press conference from yesterday not only implicates Biden, but also George Soros, in a plot to snatch 1.5 billion from Ukrainian tax payers for a…get this…”corruption tax”, through overstated gas tariffs from Naftogaz.

Fired NY prosecutor was given Biden-Ukraine allegations in 2018 but didn’t follow up, emails show

Could the impeachment scandal have been prevented if the now-fired U.S. Attorney Geoffrey Berman had followed up on Ukrainian allegations about Joe Biden and his family in 2018?

The memos show that well before Ukrainian prosecutors reached out to Rudy Giuliani, President Trump’s lawyer, in 2019 to talk about the Bidens and alleged 2016 election interference they first approached Berman’s office in New York in October 2018 via another American lawyer.

Timing of video release [#4500] & Berman termination?
Coincidence?
“You cannot attack your political opponent.”
The doubters will soon be believers.
Years in the making.
Q

Black lives matter … but the lives of “men and white folks” do not?

That apparently is the message Black Lives Matter Toronto co-founder Yusra Khogali was trying to convey when she posted a controversial tweet on Feb. 9 that surfaced Tuesday morning.

In the tweet, Khogali asks Allah for strength “to not cuss/kill these men and white folks out here today.”

Black Lives Matters activist Sandy Hudson blamed the media for focusing on the tweet, instead of the larger issues at hand.

“This is extremely frustrating and emotional for me because we slept outside for two weeks to get somebody to care about death in our community and this is what you decided to focus on? It’s very, very, very irresponsible,” she said.

This was removed by @yusrakhogali from twitter after I tweeted about it. She is co-founder #blacklivesmatterTO pic.twitter.com/TksW5kj4oX 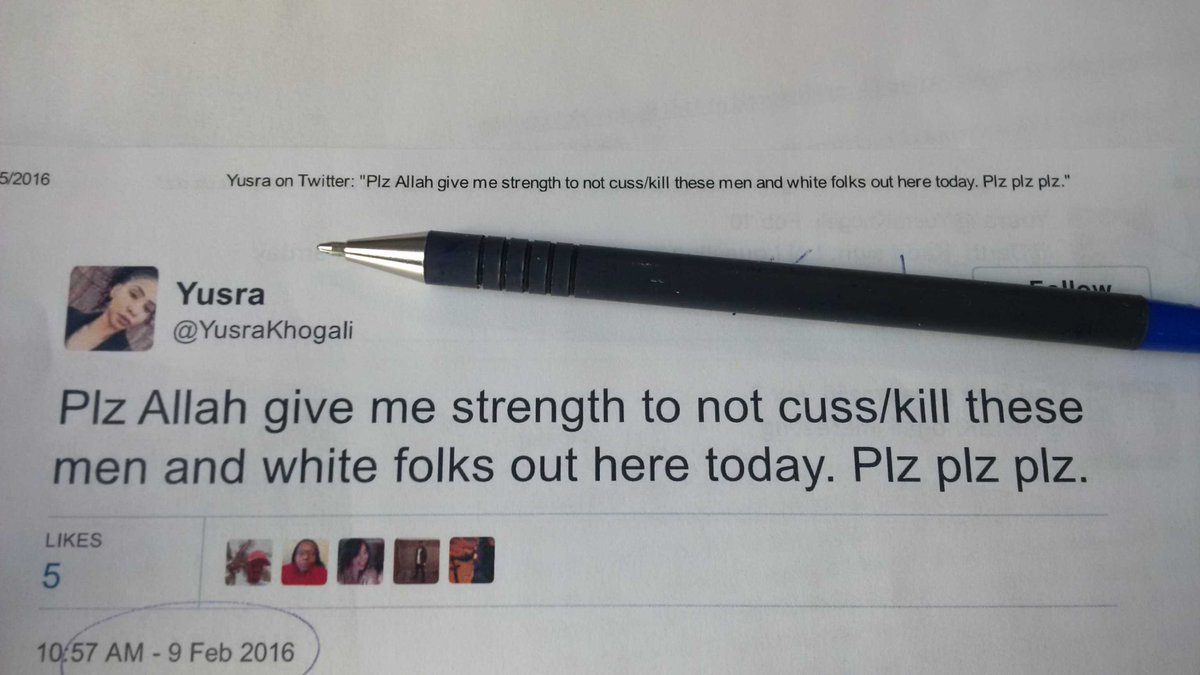 Worth remembering.
What happens when ‘racists’ are running a supposed ‘anti-racist’ organization?
Hatred?
Violence?
Destruction?
Murder?
Division pushed every election year [4 years]?
Why?
Political advantage to one party over another?
What if [D]s never let go post civil war?
What if they simply implemented a new form of control [ownership]?
Knowledge is power.
Take ownership of yourself [your life].
Q

UPDATE: Proved to a Certainty – Is Bubba Wallace “Rope Noose” a Hoax or Misunderstanding? All Talladega Garage Doors Have Nooses – NASCAR Video Evidence…

“Dangerous game” is [their] phrase of the day.