The Fed had no reason to cut rates, the economy is strong they say, so the question is why would they cut rates if the economy is doing better than 2017,2018 where they were raising rates, patriots are in control. The Fed is now fighting amongst each other. Trump and the patriots shutdown the [CB] economic plan, we have now taken back our port. The [DS] are using what every they can to keep their agenda alive. It is now falling apart, it is not gaining steam. RG releases a bombshell to the public. . The [DS] is trying to discredit RG, he predicted this. Ukraine is now investigating HRC emails. IG is ready to release the FISA Abuse report. The [DS] are panicking, the patriots are in control.

The Fed is now divided, Fed officials are taking sides

China is now at Americas mercy with Pork

Trump let everyone know that the US and China are meeting for Trade Talks, he tweeted out the following

Big day of negotiations with China. They want to make a deal, but do I? I meet with the Vice Premier tomorrow at The White House.

Then Trump makes a move to take back American Ports

The impeachment and WB complaint have hit a major roadblock, the patriots just shutdown it down and  Dems are now saying that they are no going along with the fake impeachment plan, instead of gaining impeachment steam they are losing impeachment steam, the DS players are now acting out, Biden wants the MSM to stop reporting on what happened in Ukraine, Pelosi and Schiff are being caught in a major lie, changing the rules and not following them, the patriots are making them feel the pain, we will be talking about how the patriots just shutdown the entire plan, but first we have another TV news person who is involved in a sexual harassment complaint,

Biden is now getting hit from all sides, the Senate is calling Guiliani, LG is threatening to have Volker testify and do it publicy, Ukraine has been investigating Biden since Feb

Now the DS was trying to put pressure on RG when he was gathering evidence in Ukraine, it didn’t work, RG exposed the Bidens, but now they are trying to discredit him,

The corrupt WP is tirelessly working on stories to discredit me. Stooping so low as to actually ask me about my pending divorce, to see if it affects my work. It doesn’t. Meanwhile, they don’t hold Biden accountable to answer questions about 4 decades of selling public office.

Since Biden has been caught in a lie, where he said he never spoke to his son about his business dealing in Ukraine, he has now changing his story

Joe Biden Changes Story – Now Says He Spoke with Son Hunter on His Lucrative Ukrainian Deals, “I Sure Hope You Know What You’re Doing” (VIDEO)

Take a Listen to what Biden said

Via FOX and Friends:

Then we find out that

It continues to get worse for the Bidens, The Ukrainian Parliament News revealed something very interesting about the Bidens

Eric Trump tweeted out the following

Board members of Exxon Mobil (one of the worlds largest and most prestigious energy companies) make $330,000 annually.

Hunter Biden, with no industry knowledge or duties, was being paid $600,000 annually.

All of this while the average annual salary in Ukraine is $1700 per year.

Where is Hunter Biden? He has disappeared while the Fake News protects his Crooked daddy! https://t.co/Gtwn0nxOTt

Where is Obama!? He is eerily quiet about @JoeBiden and his family cashing in on his watch… speaks volumes

As we know the WB complaint cannot go anywhere, why Trump released his phone transcript and countered the WB complaint, the DS is getting so desperate to get Trump the WB attorney are now issuing coupons for a rate discount if WBs come forward, this seems right

Former US Attorney: The Whistleblower’s Identity Is Typically Revealed – Democrats Are Trying to Change the Rules (VIDEO) Why isn’t the IG investigating his so-called Whistleblower? All bad info!

Ukrainian President Zelensky came out in defense of Trump once again, so lets get this straight, we have the phone transcript, and the person Trump spoke to is countering everything the DS WB is saying, so how does the DS have a case, they don’t “There was no blackmail,” Mr Zelensky said during a press conference on Thursday. “I had no idea the military aid was held up.”

Remember, The issue of whether Mr Trump offered Mr Zelensky a quid pro quo — US military support in exchange for an investigation into former vice-president Joe Biden in Ukraine — is one of the main focuses of an impeachment inquiry underway in Washington.

The President of the Ukraine just stated again, in the strongest of language, that President Trump applied no pressure and did absolutely nothing wrong. He used the strongest language possible. That should end this Democrat Scam, but it won’t, because the Dems & Media are FIXED!

Pence Then makes a move that the DS is not going to like,

Pence: ‘Release My Transcripts With Ukraine’

Trump and Pence are being completely transparent, now it’s Obama’s and Bidens turn, release the transcript, prove to the American people that there was no quid pro quo, if you Obama/Biden can’t do this it is game over for them

Lets sum it all up.

If you notice their plan is failing on all fronts

Pelosi is facing heat from the Dems, some are turning on her and others want the vote now

Now we know that Trump has been pushing Clinton to run in the 2020 election, he is trying to put her in the spotlight, I believe they have something special planned for her, Judicial watch is now pushing Clinton to testify in her email scandal.

It is getting real for HRC, JW, Barr and now Ukraine are investigating HRC emails, yes heard this right they are hitting her from all sides, this is why Trump and the patriots want her to run again, it will put her in the spotlight

RG tweeted out a bombshell

BREAKING NEWS: This email exchange between Ali Chalupa (Consultant for the DNC) and Luis Miranda (Comms Director for the DNC) dated 5/3/16, is one of many instances proving collusion between Ukrainian officials and DNC/Clinton campaign. pic.twitter.com/7eoRXk6DDv 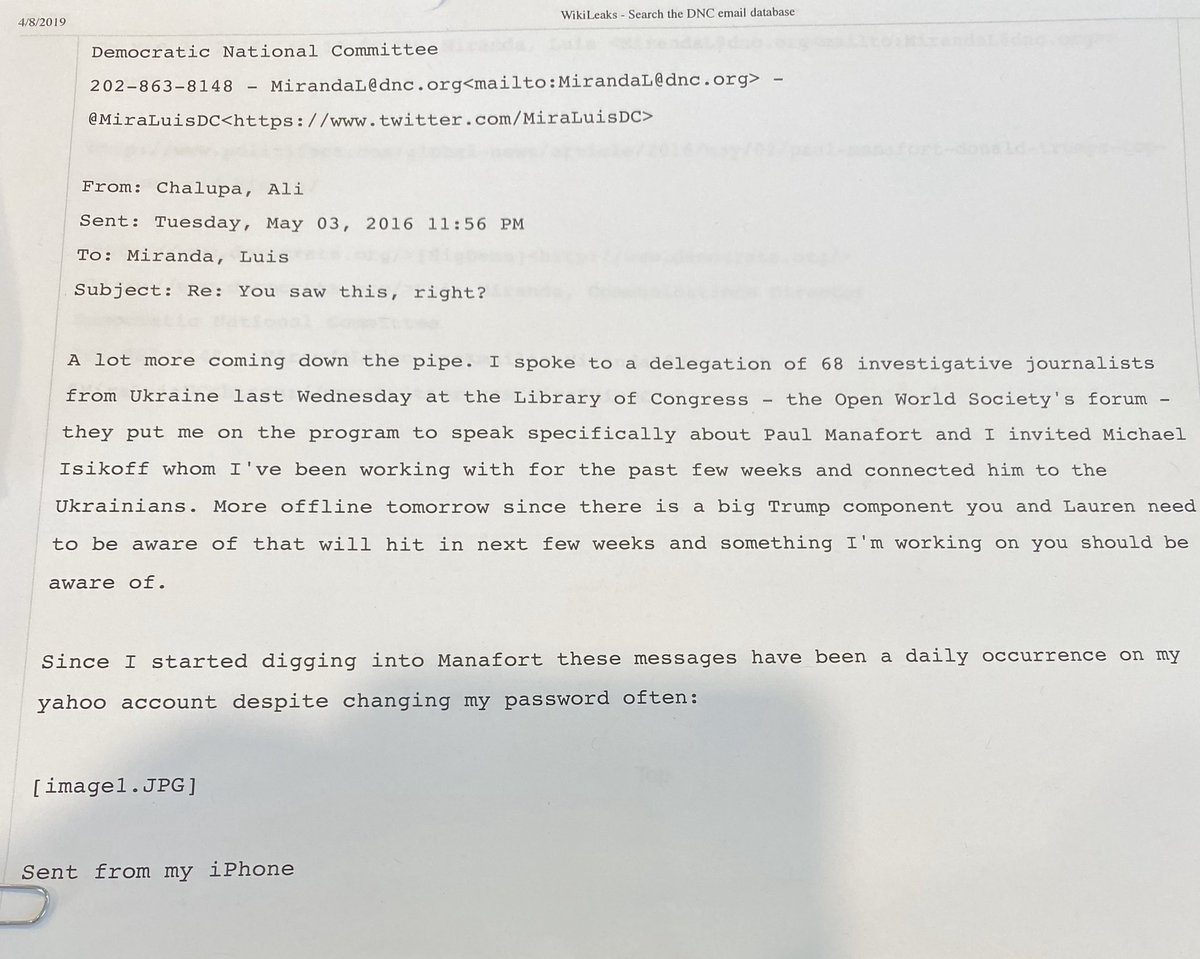 And then we have Seth Rich, remember when the

EXCLUSIVE: Despite Prior FBI Statements that Seth Rich’s DNC Computer and Emails Were Investigated, FBI Now Claims in FOIA Request that No Related Docs Exist

[D] Party Con:
When you can’t raise money ‘organically’ through party (individual) donations (voter base) YOU STEAL IT from the American taxpayer and give it back to yourself in the form of campaign contributions.
[Example 1]
Planned Parenthood
https://www.gao.gov/products/GAO-18-204R
$1.5 billion provided in taxpayer funding over 3-year period.
[Case 1]
PP spent $30 million [disclosed – real estimates close to $65 million] in taxpayer subsidies to influence the outcome of the 2018 midterm elections.
[Conclusion]
Should it be legal for a taxpayer [D+R+I] funded organization to donate massive amounts of money to the D party in an effort to sway an election?
D_insider_term: T_WASH
Re_read drops re: Soros & taxpayer funding
YOUR HARD EARNED TAX DOLLARS AT WORK.
VOTE! VOTE! VOTE!
Q

Trump brings Kirstjen Nielsen back into his administration

Now the DS players are panicking over Syria, remember they are watching their plan go down the tubes and they are at risk of being exposed.

UK SAYS HAS SERIOUS CONCERNS OVER TURKISH OFFENSIVE IN SYRIA

George Orwell explains why a society hates those who speak the truth, why people lash out when they hear the truth, the DS knew that if they were able to spread propaganda lies it would have a certain effect, Here is the quote from GO,

“The Further a society drifts from the truth, the more it will hate those that are speaking it”,  George Orwell