The [CB]s are not pushing fear if the BREXIT goes through. The [CB]s are creating charts and telling the UK and the world if the BREXIT happens the UK could face recession, high unemployment etc.  Consumers in the US are very optimistic about the economy, Trump and the patriots have now succeeded in their goal to get the people behind them. The China deal is very close to being made. The Fed officially starts QE even though it is not QE. Trump and the patriots are in control. The [DS] is now struggling to keep their plan from falling apart. The whistleblower identity might have been revealed. The WB does not want to testify and we have come to learn the WB has connections to AS and JB, this is a political hit job. The patriots are pushing their agenda in Syria, I do believe Turkey is their to remove the DS operatives, paid mercenaries in the Kurd area, this was preplanned, once removed Trump will mediate a deal with Turkey and the Kurds.

The [CB] are now projected that if the BREXIT happens the country would go into a recession, the fear mongering will intensify as we get closer to Oct 31.

NO-DEAL BREXIT COULD CAUSE ANOTHER RECESSION, CENTRAL BANK WARNS

We need to ask a simple question, when we came off the gold standard on to the fiat system, what happened

And what happened in the US when we were moving onto the CB petrodollar system.

Here in the US Trump is keeping the illusion alive, when we look at the UMich

The White House tweeted out the following 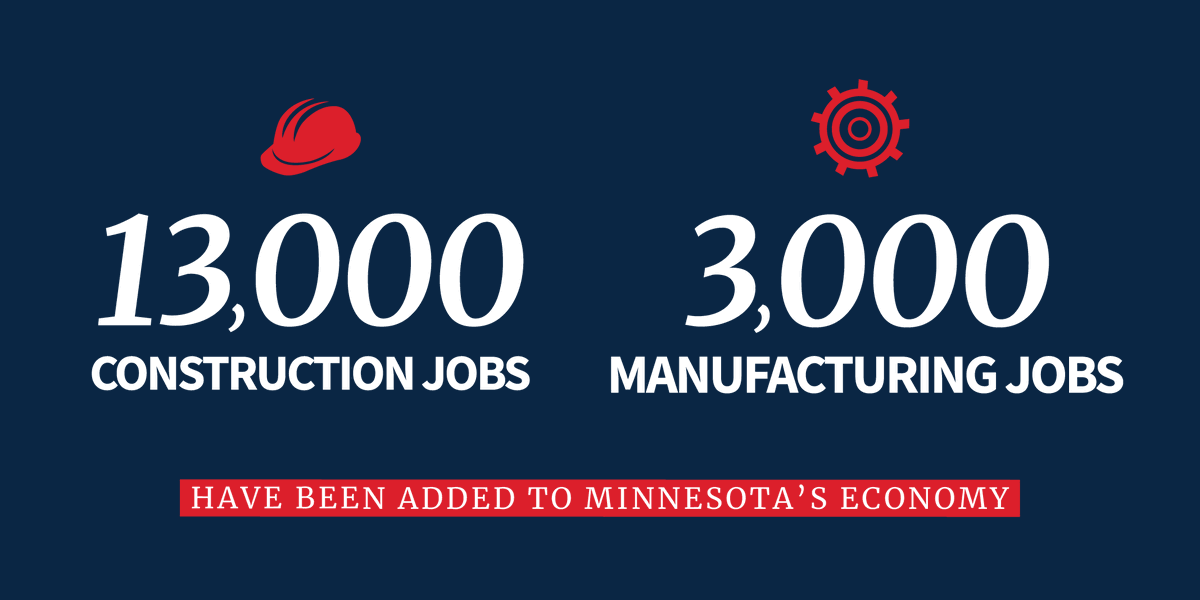 Trump is now meeting with the Chinese, the Chinese are now buying more pork and the US now has more leverage over China. Trump Tweets out the following

Good things are happening at China Trade Talk Meeting. Warmer feelings than in recent past, more like the Old Days. I will be meeting with the Vice Premier today. All would like to see something significant happen!

One of the great things about the China Deal is the fact that, for various reasons, we do not have to go through the very long and politically complex Congressional Approval Process. When the deal is fully negotiated, I sign it myself on behalf of our Country. Fast and Clean!

Now the Fed the other day announced the QE was going to start very soon, they are not calling it QE but it is QE, the Fed

The [DS] fake impeachment is running into problems, the whistleblower identity is being revealed, and it seems a candidate running for the Presidential election is associated with this WB and the WB does not want to testify, the lawyers of the WB wants testimony via letters, it is all falling apart for them, the scam is being revealed, the patriots are exposing it all, why intefere with any enemy while their destroying themselves, we will be discussing this a little later in this report, but first it seems Mitt Romney realizes he does have a chance to become President in 2020

The case against Hunter And Joe Biden is building, the patriot have been gathering evidence and Hunter has disappeared, RG is producing more and more evidence and he is letting everyone know that Ukraine and China are not the only places we should be looking at,

Guliani says “keep your eye on Romania”, says there’s Biden Corruption there too as well as another country he hasn’t named yet.

Now , we know RG was working with two individuals that were arrested, but we need to understand that the arrest has nothing to do with RG or the Ukraine call,

Fact Check: No, the Indictments of 2 Rudy Giuliani Aides Did Not Stem from the Ukraine Call

Now the WB, who the MSM/DS have been promoting to push the fake impeachment hearing has

BNL news tweeted out the following

BREAKING NEWS: Three current and former national security officials tell OANN that the CIA whistleblower likely accompanied Joe Biden on one or more of his trips to Ukraine while he was Vice President

Internet sleuths started digging to find out the identity, they know this person is associated with Biden, he traveled with Biden and now they came up with a name.

Fool nelson tweeted out the following 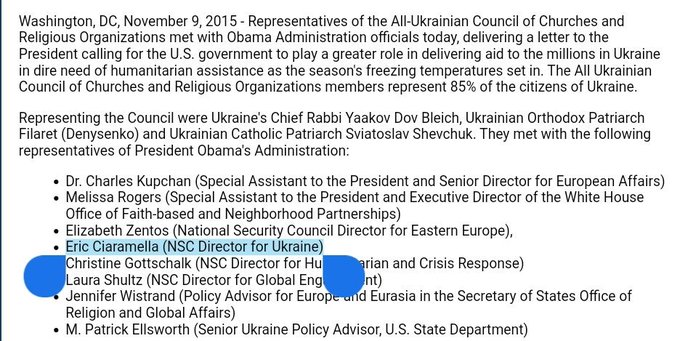 When looking into this Eric Ciaramella, we come across none other than Ali Chalupa, DNC operative involved in digging up dirt on Trump and Manafort back during the 2016 election. 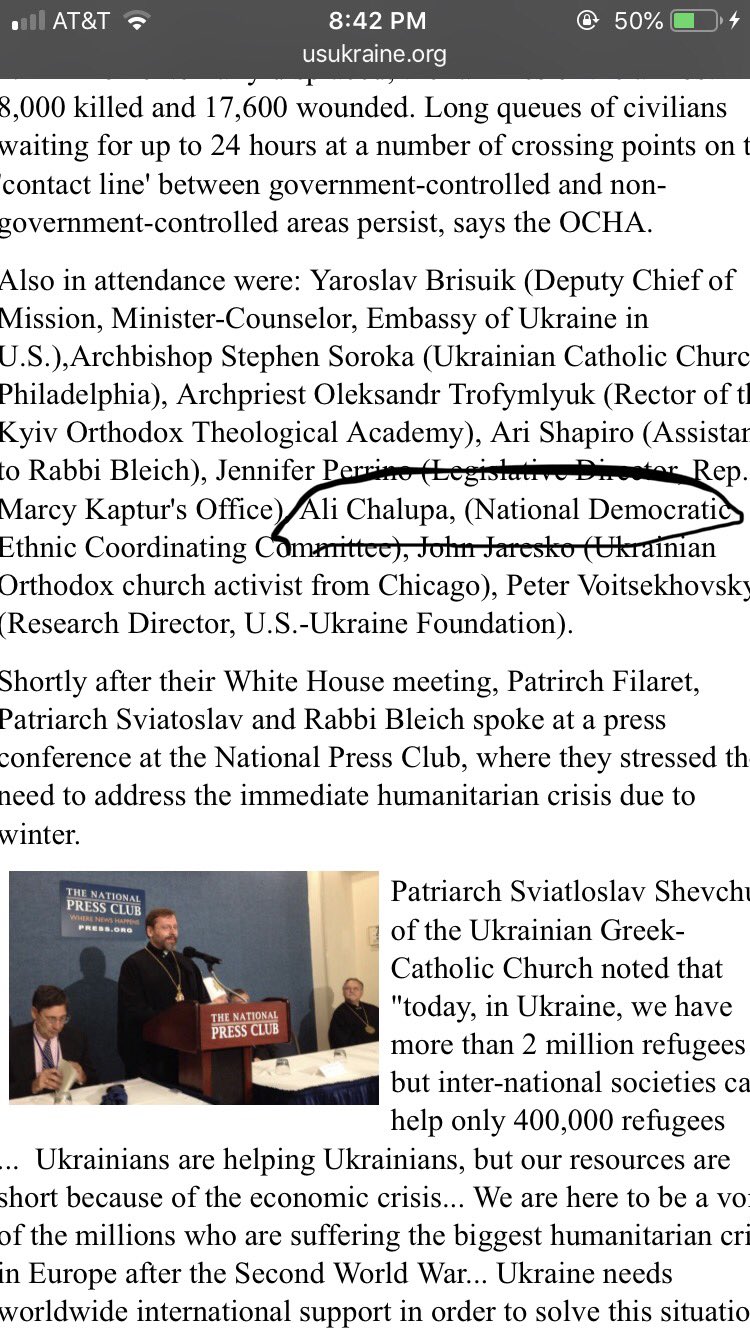 We will know soon if this is the person

Then we find out

This was another coup attempt.
Via Gregg Jarrett:

The former Inspector General for the Intelligence Community, Charles McCullough, who worked under President Obama’s Director of National Intelligence, James Clapper, assisted and advised the Ukrainian-call “whistleblowers”. McCullough, is a partnered attorney at Compass Rose Legal Group, and assisted Andrew Bakaj, a former staffer of both Sen. Chuck Schumer and Sec. of State Hillary Clinton.

With James Clapper admitting that President Obama was the one who ordered the intel community to start “compiling” information to launch the “witch hunt”, this new revelation should not be that surprising. This just adds to another example of the deep state showing their uncontrollable hatred toward President Trump.

And all of this brings us to the fake impeachment hearing, like we discussed before the subpoenas that the house is issuing are not subpoenas they are letters.

So lets see, does the DS really they can remove the most powerful elected political representative of The United States, could continue based on an anonymous complaint.   These people really are stupid

This entire fake impeachment is coming down around them, and now Pelosi, Schiff and the rest are in the crossharis. House Freedom caucus tweeted out the following

Being in contact with a key witness and then lying about it renders Adam Schiff unqualified to lead a fair and just inquiry. Members of the House @FreedomCaucus call on Speaker Pelosi to request the immediate recusal of Adam Schiff. https://t.co/jeoFINtkDF

An now it seems like it is time to go after Brennan, the architect of the entire push to get Trump out of office

Now we know the [DS] has been trying to get Trump tax records since he got into office. Remember before Trump was brought in they went through everything to make sure he was clean, there is no law that says he needs to hand over his tax records, but the [DS] believe since he is holding them back there must be something there that they can use, he did this on purpose, he will use this later on to his advantage.

Now in the case of Duetsche Bank

Lets head on down to the border, the wall is going up and the border patrol explains how the old wall is coming down and the new one is going up, take a listen

The old barriers along our southern border were built to defend against vehicle crossings—and not much else.

How comprehensive technology will keep our borders safe, strong, and secure: pic.twitter.com/JTGOd8e6Gw

Now out in Syria, the DS players are panicking big time, the MSM is pushing the idea that Turkey is invading Syria and killing the kurds, this entire operation was planned from the beginning.

Trump and the White House say the Turkey is running this operation, remember this is for optics, remember when Trump fired the missiles into Syria, the airbase was cleared, hardly any damage, this wasn’t the target, the DS was, optics.

We defeated 100% of the ISIS Caliphate and no longer have any troops in the area under attack by Turkey, in Syria. We did our job perfectly! Now Turkey is attacking the Kurds, who have been fighting each other for 200 years….

….We have one of three choices: Send in thousands of troops and win Militarily, hit Turkey very hard Financially and with Sanctions, or mediate a deal between Turkey and the Kurds!

This was a brilliant move by Trump, how do you get the paid mercenary army in an area where the DS Kurds are protecting them, you remove the troops from harms way, let Turkey push their operation in Syria, The DS and MSM focus is not on Turkey, Trump and the White House say that Turkey needs to stop or else, once the operation is complete and the rest of the paid mercenary army and DS players are defeated and removed, Trump comes in to mediate a peace deal with Turkey and the Kurds, Syria gets involved, and who wins, the patriots.

Now Trump was in Minneapolis yesterday and he let the DS players have it.