Trump and the patriots are letting the people know that the economy is strong, wages are up, unemployment low, new trade deals are in the works. The US is now being prepped for the transition, do not get confused, the old [CB] is dead, Trump will drive it into the ground and transition us to a sound money system. The IMF fell right into the trap, the are now reporting that the trade wars are the cause of the global meltdown. The [DS] has no way out of their plan that didn’t work, they are holding close door meetings so the people don’t catch on. The AS, NP have changed the rules to fit their agenda and now the people are catching wind of this. JA is now in court to see if he will be sent back to the US, the patriots are getting prepared for the evidence to be produced, timing is very important. The Syria plan is moving along according to schedule, here come the negotiations between Turkey, US, Syria and Russia, boom. Trump and Flynn have coordinated their banner pages.

Just out: MEDIAN HOUSEHOLD INCOME IS AT THE HIGHEST POINT EVER, EVER, EVER! How about saying it this way, IN THE HISTORY OF OUR COUNTRY! Also, MORE PEOPLE WORKING TODAY IN THE USA THAN AT ANY TIME IN HISTORY! Tough numbers for the Radical Left Democrats to beat! Impeach the Pres.

I just wanted to make a correction, I said yesterday that the port of long beach is in AS district, that was incorrect, it is in Adam lowenthal district

The [DS] are now trying to do damage control with HB and JB, HB gave an interview, he says its all a conspiracy theory, the [DS] is struggling, they are on the hunted, Hunter is now the hunted. The [DS] is now operating in the dark, they don’t want the American people to see they have nothing that they can use, they are in trouble, the impeachment is not going anywhere and I do not believe they have the votes, because if they did have the votes they would have held vote to show that congress is behind the impeachment. The IG report was suppose to be released on Oct 18, and now they are saying it will be later, disinformation to keep the [DS] off guard and to gather intel to see what they are planning, Flynn and Trump put up similar Twitter banners, we will be talking about this a little later in this report, but first it seems the [DS] are putting out feelers for Michelle Obama, I know she said she is not going to run, so why put out a poll…..

Now Hunter Biden appeared on the MSM to clear his name, and the MSM did what they do best, they asked softball questions and did not real investigation into the Biden’s, they are just taking his word and what RG/Trump are pushing is a conspiracy theory.  Hunter fell right into the trap

HB was asked very simple questions about money and his business dealing, take a listen

“Have you received any money from that business dealing at all?”

Hunter said something very interesting he used the Alice in Wonderland reference, is this a coincidence that  Hunter mentions “Alice in Wonderland” and “Rabbit hole?” I don’t believe so…  the question is what else was he involved in. 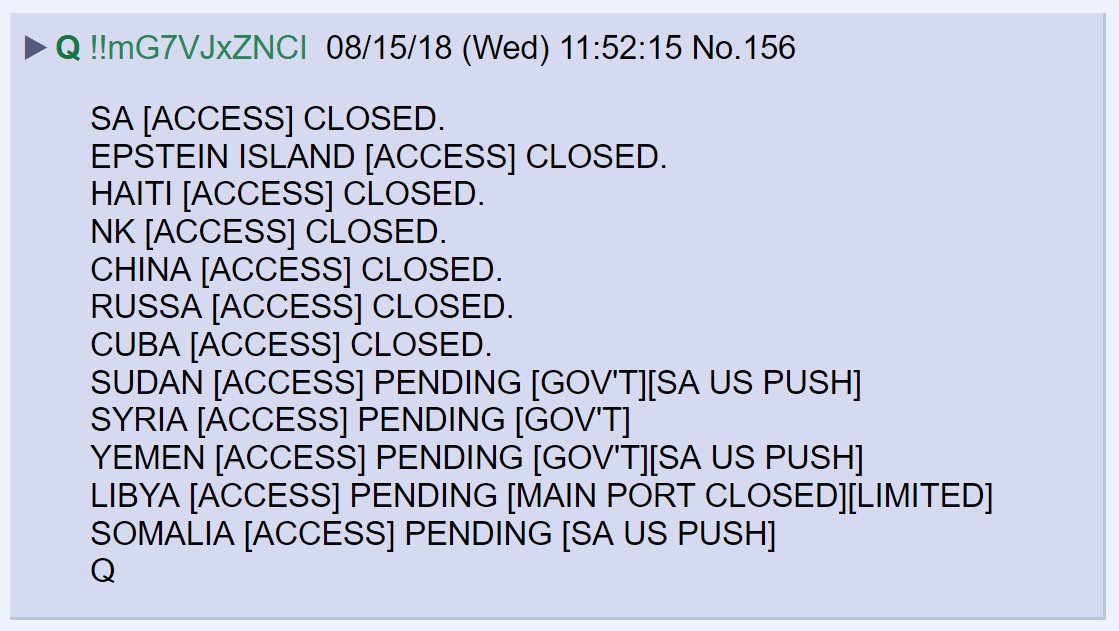 HRC = Alice
SA = Wonderland
WHO ARE THE WHITE RABBITS?
Re_read drops re: SA
Have faith.
For God & Country.
Q

Hunter Biden was really bad on @GMA. Now Sleepy Joe has real problems! Reminds me of Crooked Hillary and her 33,000 deleted Emails, not recoverable!

It seems Hunter has got caught up in his lies, changed this answer.

Source: theepochtimes.com
RG has the evidence on HB and JB, the [DS] fear RG, they are now going after him, the patriots knew that this was going to happen, RG let everyone know that the [DS] will try to discredit him and destroy his reputation, the patriots have been prepared for this.

The [DS] are doing everything to try to stop this, they are on the defensive, the WBs are not working, they can’t use them for their fake impeachment inquiry, Trump tweeted out the following

Shifty Schiff now seems to think they don’t need the Whistleblower, who started the whole Scam. The reason is that the Whistleblower has lost all credibility because the story is so far from the facts on the Transcript. Also, the second Whistleblower is no longer even mentioned!

Jordan: “He has a right to protection, that’s what the whistleblower statute says. It’s doesn’t say anonymity.”

Jim Jordan reports on the hearing with Fiona Hill, this is what he had to say, he tweeted out the following

Once again, nothing that Fiona Hill said today in her deposition was classified. None of it should have been hidden from the American people.

But @RepAdamSchiff continues his agenda to impeach the President with a secretive, biased, and unfair process.

I’m potentially expected to vote on impeaching the President of the United States, yet as a member of Congress I’m not “allowed” to see transcripts of the witness testimony?

If my Democratic colleagues truly care about the constitution & not politics, they will demand the same. https://t.co/RIIytBp5EX

Then we find out that  Fiona Hill WAS NOT EVEN WORKING IN WHITE HOUSE at Time of Trump Call – But was Very Upset with Call – Huh? (VIDEO)

Then JW drops the surveillance targets requested by US – U.S. Ambassador Yovanovitch and State Department

Why are the [DS] players pushing so hard, they know that the IG Report, the Declass is coming, they know that this will be a game changer and it will be very difficult to handle everything coming at them, BNL news is now reporting that certain information was sent to directly to OBama

BREAKING: Fusion GPS’ Glenn Simpson reveals that he was first hired to investigate Trump in “the fall of 2015” and that memos from his now-discredited Steele dossier made their way directly “to President Obama”

Now Maria Bartiromo has been reporting that the IG report was going to be released on Oct 18th, then she tweeted out the following

UPDATE: -IG report NOT out this Friday 10/18. Classifications being made. Likely end of month. @MorningsMaria @FoxBusiness @SundayFutures @FoxNews @MariaWallStreet #FisaAbuse

Trump and the patriots use disinformation to push the [DS] into making their move, why
1. They listen to the chatter
2. They want to know what event they will use to clog the news cycle
3. They counter the event, by rescheduling
4. The [DS] has an event to use, they don’t know when to use it
5. The patriots make the [DS] expel ammunition, ammunition is hard to come by
6. Once the ammunition is used, the patriots release the information
Now we just go news that JA is heaed to court in the UK

Project Veritas has now put out Part II of CNN, Trump tweeted out the following

Now that we have found out that @CNN is a virtual fraud, rumor has it that Jeff Zucker will be resigining momentarily?

We are now seeing more and more arrest of Human traffickers, in Michigan

The plan is Syria is moving forward, the MSM, DS, Neocons and other countries do not have the power to stop this, so they are screaming very loudly

President Trump and General Flynn’s current Twitter banners!!#QAnon #TwitterBanners @realDonaldTrump @GenFlynn
🙏🙏🇺🇸🇺🇸⭐️⭐️⭐️
In case you wondered – I save these for historical purposes and to note any changes. pic.twitter.com/cLgk0TvWbI